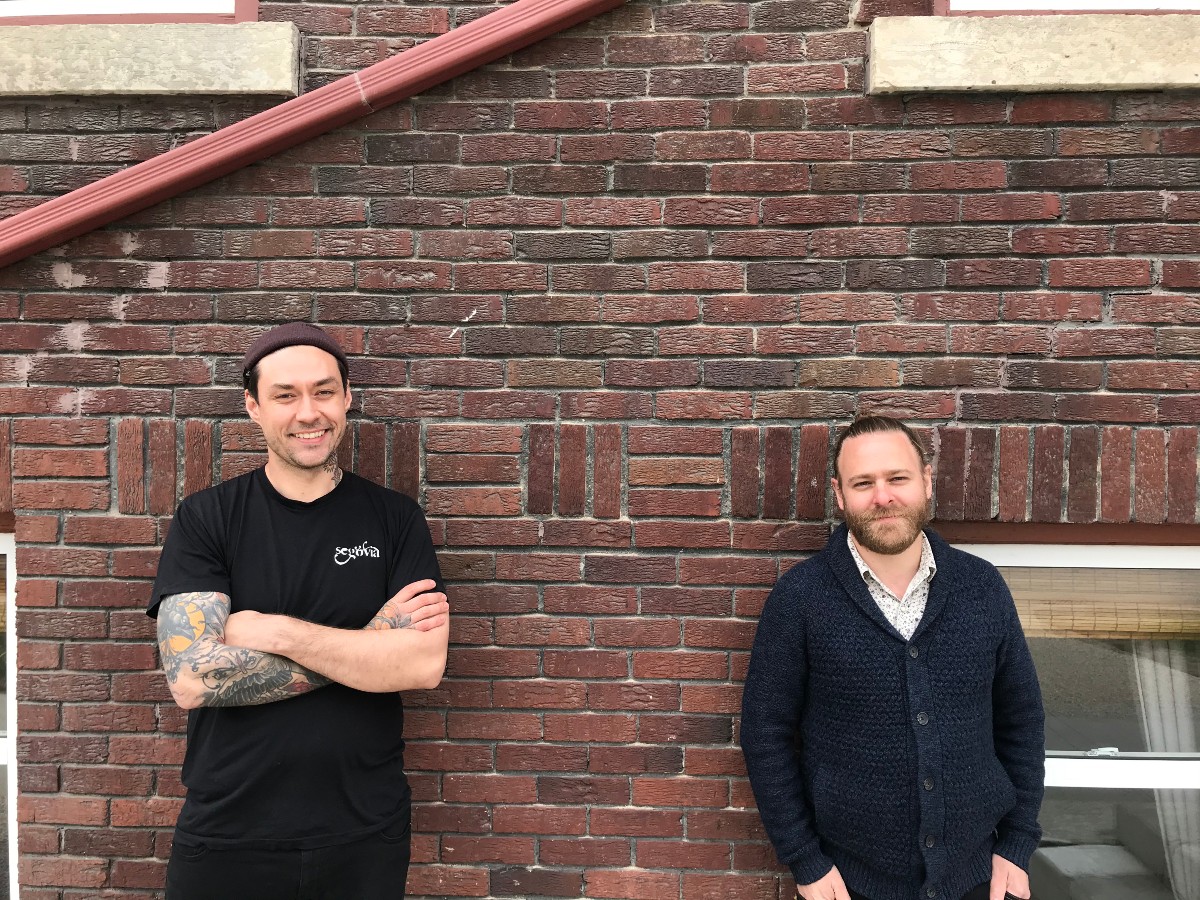 Former chefs from Sous Sol and Segovia have returned from London, UK to create new series that focuses on simple, fantastic food.

Despite both cooking for years in Osborne Village, it was London, UK, that started up a friendship that has turned into a culinary collaboration between chefs Mike Robins and Keegan Misanchuk.

“I think we had only met each other a couple of times in Winnipeg, namely when I would borrow a tin of caviar or something when I would walk over from Sous Sol,” said Robins.

“Yeah, it’s really funny because we worked a block away from each other, plus Winnipeg is small and you know everybody,” said Misanchuk, picking up where Robins left off as we converse in a public park.

“I think I had been in London for two weeks and he just randomly messaged me and said, ‘hey, I heard you moved to London too. You wanna’ go for a pint?’” continued Misanchuk with Robins adding:

‘And many more pints followed.”

Misanchuk was at Segovia here in Winnipeg for four years after graduating from Red River College’s culinary program. He was chef du cuisine for his last year and a half there, at a time when the restaurant was #46 on Canada’s 100 Best Restaurants list. He is originally from Dauphin, MB., having moved to Winnipeg when he was 19.

Robins too is a Red River College culinary grad. His Winnipeg resume includes St. Charles County Club after graduation (“a crazy strict kitchen under chef Murakami, who was just pumping out great chefs; I loved it”), followed by Sydney’s at The Forks, going from an apprentice to coming back to The Forks’ former fine-dining establishment as head chef. During that time he also opened Sous Sol as a co-founder and head chef, while also winning the 2017 Winnipeg leg of Canada’s Gold Medal Plates.

Both chefs have recently returned from two years in London, with Robins having been the head chef of Pidgin, and Misanchuk cooking at BRAT.

Now, you can taste their collaborative plates as part of Two Hands, a new catering company that is just about to launch its fourth endeavour.

They started together with a Valentine’s Day menu, followed by a sale of meat pies. The last edition – featuring 180 lbs of salt beef brisket and 350 Salt and Sunshine bagels at Kilter Brewery – sold out fast last weekend. Starting today and tomorrow (April 30, May 1) they are serving up these Thai barbecue-inspired dishes at Torque Brewing (all first come, first serve).

In the below interview (which was conducted outdoors in a public park), the two chefs go over what brought them to London, what is now influencing their food, and what spots they missed from Winnipeg’s culinary scene.

What brought you to London?

MR: For me, I moved to London because I had a British passport, which is big. And I just wanted to go somewhere in Europe, I’d never been. And I feel London’s a good gateway city.

And there have been a bunch of Winnipeg people who have done it. Donnelly [Adam, chef/co-owner of the now close Segovia, which was the city's most nationally celebrated restaurant] was there for a year and just raved about it… and when we got there, there were eight or nine people in the industry from Winnipeg – super weird.

So I just wanted to check it out and I got sucked in and loved it. I was going to stay there a year and it ended up being a couple.

KM: Same thing. Working at Segovia so long, Adam had done it when he was younger right before he opened the restaurant and always raved about it.

The kind of restaurants whose cooking we were into at Segovia where a lot of London places, like St. John and Lyle’s -- more rustic spots -- and I had just kind of got to the end of my time at Segovia. I had worked up through every section and I thought the next step was to start fresh in a new city.

The Visa was extremely simple to get and, as Mike said, there were a bunch of other Winnipeggers already there doing well. So I thought, if they are doing well, so can we.

Tell us about the restaurants you were working at?

MR: We were at two very different spots. Where Keegan worked, BRAT is a Michelin one-star place, it’s all cooked over a wood fire. It’s huge and packed day and night, crazy popular.

And Pidgeon is a 26-seat, 12-course tasting menu place where the menu changes every week. So very different styles, but the one thing about London is there is a little bit of everything [cooking genres] but they all source local ingredients, it’s huge, from taco shops, to three-Michelin star places, to simple Italian places, there’s a huge emphasis on supporting local as much as possible.

Has this influenced your menus so far?

KM: There’s just such a variety of amazing food there, and I think that’s what you do when you come to it from a smaller city. You go to these food Meccas and you try to bring something back from it, stuff that you’ve had there that aren’t as common.

The restaurant I worked for, their company Super 8 has two Thai barbecue places in the company, Smoking Goat – located right below BRAT – and KILN, and they were places we’d go on our days off, or after service. Just eat a bunch of spicy food, drink some beers, and that for me is a huge memory for London as well.

And that wood oven [at BRAT]. It was intense. I lost like 20 lbs in the first month from just sweating. You can’t teach someone to use it, you just have to throw them toward it so they can figure it out… But now I love that style of cooking. Now when I think about food I think about charcoal, and grilling and fire – it’s just exciting. So that’s influenced this weekend's menu.

MR: Thinking back, every pop-up we have done has been directly influenced by London restaurants. The bagels were like a place called Bagel Bake, our pies are like Willy’s Pies in London…

KM: Ya this guy's pies! He’s wildly successful now. But he’s just doing it properly, using like the right flour, the right meat, he’s not skimping on ingredients. He’s supporting the small local butcher, the local flour mill – and maybe his profit margin isn’t as big, but he’s helping out everyone next in line because of that.

When we were in lockdown I was helping him every week; it was just something to do. And now you see young people like that who just say, ‘I’m going to do my own thing,’ and he’s huge.

MR: It’s like our go-to's, like Bagel Bake and all the ones we are doing are like weird comfort food that you’d go to on your day off… It’s all stuff we miss about London.

What do you have in the works?

MR: We won’t continue to do one event every weekend, but we will continue with the pie thing… that’s the thing that will be repeating.

I don’t want to use the word fine-dining, but there’s one [event coming up] similar to what I was doing at Pidgin in Clear Lake, MB, scheduled for after the long weekend.

KM: As soon as this Thai barbecue one is finished we’ll plan more. I like the brewery thing because these are places that don’t have a kitchen, but they have tons of space, so we come in and sell some food and they’ll sell more beer because of it, and vice versa.

What was your first meal back in Winnipeg?

KM: The first thing I had was we ordered was Ramallah. [Mike comes in here with, “I had it last week; it’s pretty good”]. We had Turkish takeout when we were in quarantine. It’s on Pembina.

I also love all the newer small local restaurants that are doing something different, like  Khao House. Randy and Korene [the chef/owners] are just the nicest couple you will ever meet, and their food is amazing.

MR: Baraka Pita! It was the first thing I had after my two weeks of lockdown. But the actual first thing I had delivered was from those Kosmo bros. [Kosmo’s Space Cowboy Food Cantina]. It was some awesome fried chicken thing with Cheetos on it or something. They are doing what more Winnipeg chefs should be doing, which is cooking what they want to cook.

Is that where food should be going?

KM: It’s kind of like that in London too. It's how a bunch of places have become really big. They just start as a food stall somewhere and it ends up blowing up as they are just making what they want to eat.

MR: A lot of chefs will do these residences, and be working these 80 hour weeks. I did that the first few months I was in London working at Michelin-starred places burning myself out… getting on the tube at six in the morning, then back on it again at 2 a.m., six nights a week.

Yes, sure, you can’t argue you get some new skills and learn how to cook. But after a while, these people burn out and decided to just make the best burgers ever at a pub. You soon have people super well-trained chefs simply doing what they want to do.

You see that same thing here [in Winnipeg] now. You have  Made by Paste, Salt and Sunshine, Tyrone [Welchinski’s Meats] and those crullers from Crumb Queen. A lot of these younger chefs are looking at this as an opportunity to have a work-life balance and still be successful while working for themselves. You just hope it sticks.

This interview has been edited and formatted.

Service hours of Two Hands' latest event at Torque Brewing is Friday, 3 p.m. to 9 p.m., Saturday from noon to 9 p.m.