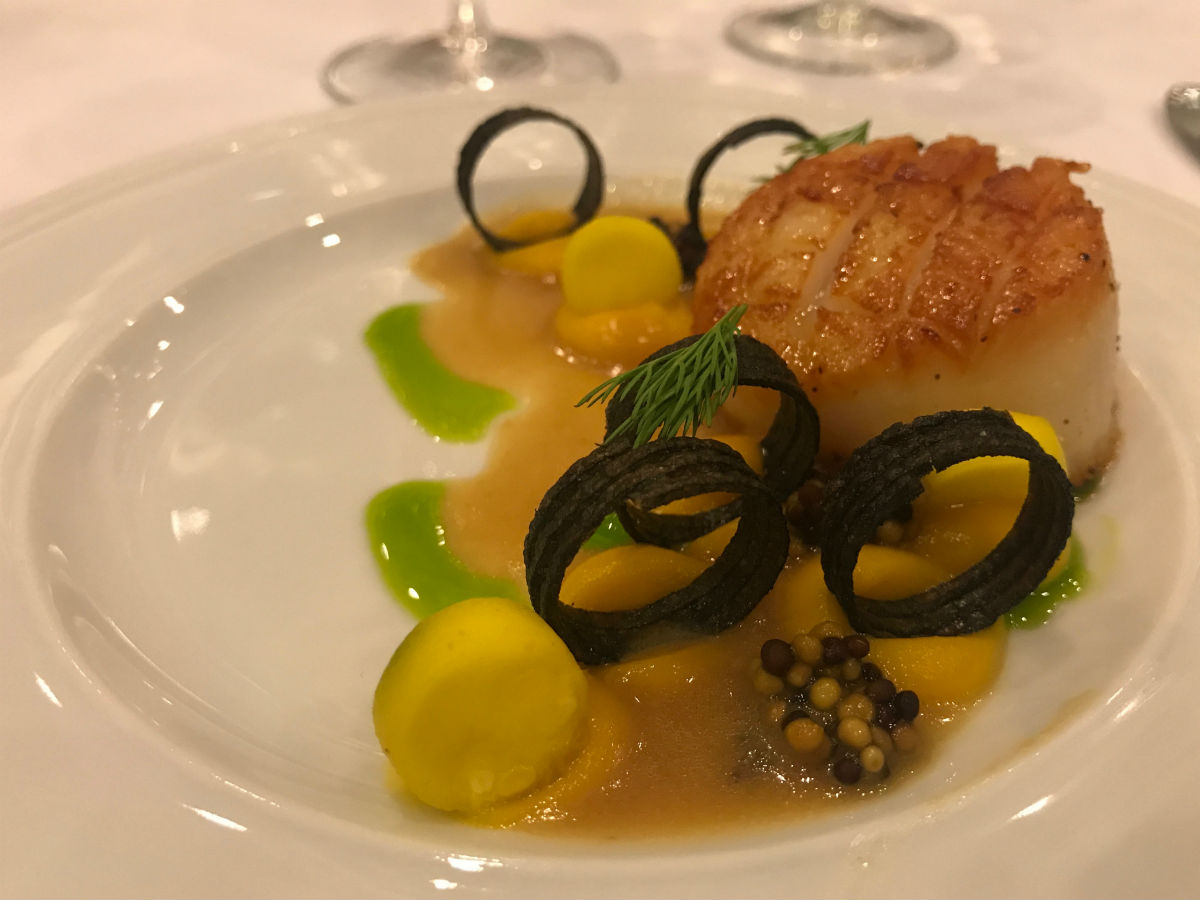 The chef from Sous Sol created a dish featuring a perfectly seared scallop – the top was scored and golden, while the middle was just verging on turning white – that was buttressed by an assortment of almost all-Manitoban ingredients.

There were pickled mustard seeds from near Gimli, crispy potato tuiles turned black from cuttlefish ink (chef told me that this application alone took nearly 50 hours of prep from his cooks) and a lick-your-plate worthy dashi beurre blanc. Aside from the scallop, the other star of the show was the best zucchini I think I’ve ever had, which was pickled to make it sing through the fat on the plate while it had a crunch like a slightly cooked carrot. If he were to sell it by the jar, I’d buy a case. 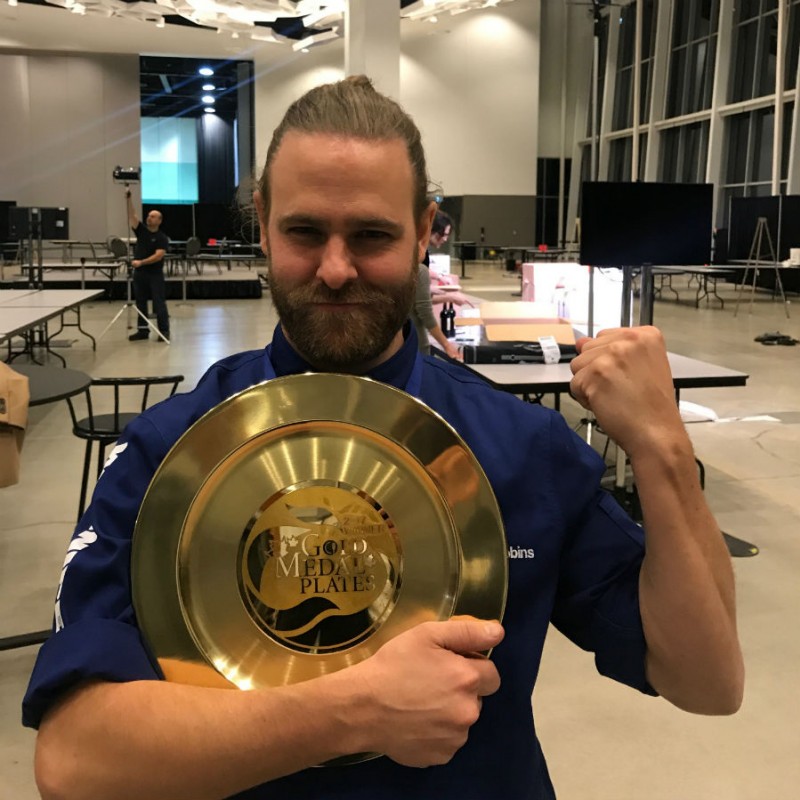 Chef Robins with his goldware (PCG)

Robins also had arguably the best wine pairing of the night too (which is part of the judging criteria), utilizing the Okanagan’s Tantalus Riesling, which he made sure was not too chilled, allowing its bright citrus notes to round your mouth. It complemented the buttery nature of the dish and the briny flavour of the scallop.

It was the second dish we were served, and at the time us judges exchange knowing nods that this one would be hard to beat.

Robins will now go on to represent Winnipeg at the Canadian Culinary Championships in Kelowna, February 2-3, 2018.

Chef Rob Thomas took silver with a braised beef short rib. It was the only dish of the night that incorporated spice, featuring a light version of a mole, while my two personal favourite components on the dish were a delectable chipotle carrot purée, and crispy plantain crumble that Thomas used to top off the meat. Acidity on the plate was courtesy of a cilantro mojo sauce, while the wine pairing was Diabolica Red – an interesting blend of merlot, petit verdot, and shiraz whose complexity was a lively match for the dish. 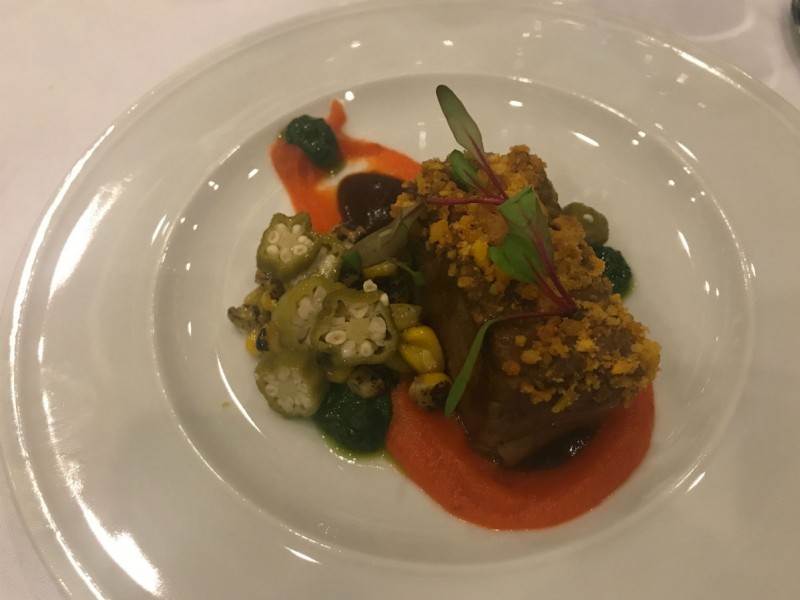 Bronze went to Assiniboine Parks Conservancy’s Heiko Duehrsen, who did great work with locally farmed trout, which he sous vide while keeping the fish robust and meaty. The plate also contained near-crisp cuts of shitake mushrooms for texture, while dabs of creamy horseradish sauce worked nicely with the fish.

Other competing Winnipeg chefs included Wayne Martin from Capital Grill – whose braised lamb featured a delicious parsnip puree and sunchoke chips; Nicolino’s Fabrizo Rossi – who had a pretty lovely risotto dish (and really, how crazy hard is that to make risotto for 600 people?); Barry Sanders from SMITH – who did a silky foie gras torchon with some sweet (both literally and figuratively) and acidic elements like pomegranate and orange fluid gel, that I wish I was eating right now; Thermëa’s Thomas Stuart – who made my second favourite purée of the night, that being an airy turnip one; and Kyle Lew from Chew, who actually foraged hen-of-the-woods mushrooms for his dish that paired beautifully with Barn Hammer’s Grandpa’s Sweater Oatmeal Stout – which was also the only non-wine pairing of the evening. 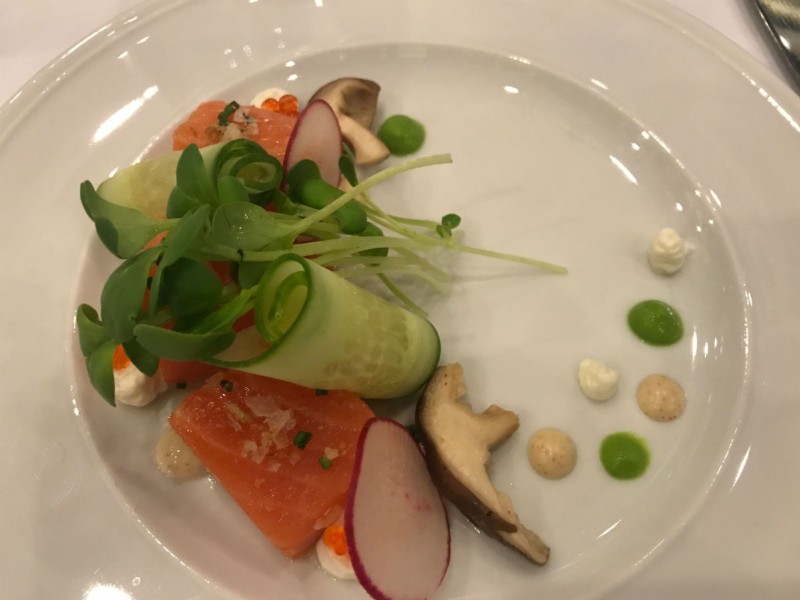 Along with being a culinary competition, Gold Medal Plates is a cross-Canada fundraiser for the Canadian Olympic Team, with plenty of current and former and Olympians in attendance, including emcee and three-time gold medalist Marnie McBean. And on that note, I also finally (briefly) met multiple Olympic medalist Curt Harnett at the event (this was my third time judging), and yes, his hair is still fabulous.