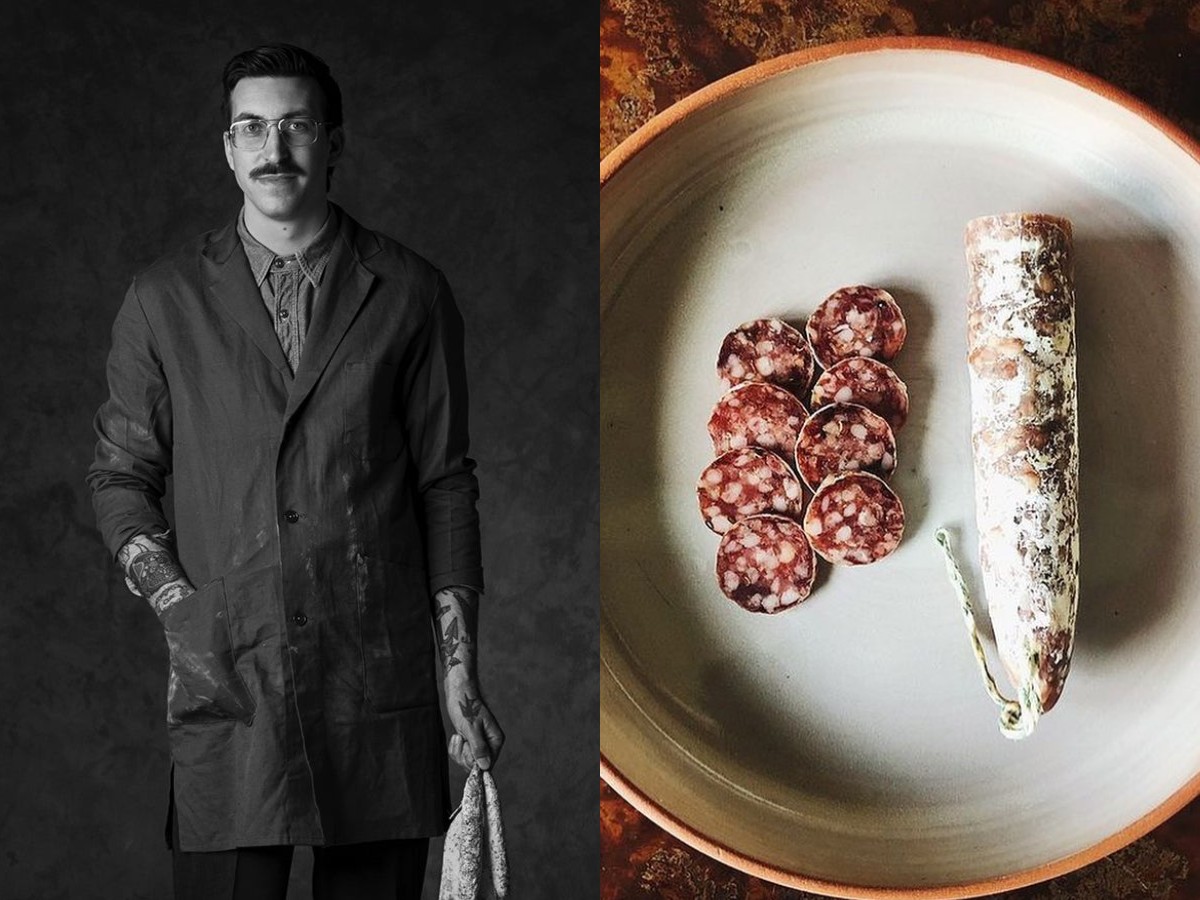 Tyrone Welchinski is a chef known for his meats. But he’s also a conscious carnivore.

“I don’t think that meat should be eaten all the time too. What I do is a very specialty product that isn’t meant for everyday. It’s a treat,” he said, taking about his new old-school salumi business, Welchinski’s.

“And if you are going to eat meat, be conscious of where you are purchasing your meat from. Like what impact does this meat have on the environment? What is the health of these animals? What are these animals eating as ultimately that’s what I’m consuming as well,” Welchinski continues.

We’re all for ethical, pasture-raised meats. And we’re also all for dishes Welchinski has made with these, like a pig’s head course he served at RAW:almond one year, which was covered in the LA Times; the simple, perfect Le Burger at Nonsuch (which he describes as, “A blessing and a curse… because we didn’t just want to be flipping burgers, but it is a good burger, right?") and countless King + Bannatyne sandwiches. It was the latter where he helped develop some of the menu’s mainstays with owner Mike Del Buono (who Tyrone describes as “the best boss I've ever had”).

But with the pandemic, like many in the service world, he was laid off but has quickly gone into business of his own with Welchinski’s – a craft salumi business that is currently available for pickup, while a few merchants are in line to start carrying his product.

We caught up with Tyrone, who is currently casing around 30-40 kgs of local pasture-raised pork per week to make his salamis, to see how he got his start, why he uses suppliers like Zinn Farms and what’s up next at Welchinski’s.

When I was 16 I worked at Pine Ridge Hollow. I grew up in Oakbank, MB., and if you are at all interested in cooking that’s where you go work – and also as far as my parents were willing to drive.

Then there was Bistro 7/4; I did some events with Alex [Svenne] back in the day. It’s crazy to think the chefs and the talent that went through that kitchen at that time. And then I was at Lobby on York when Jesse Friesen was cooking there. And then Peasant Cookery. I was a sous chef at Fitzroy before it shutdown [and turned into Sherbrook Street Deli].

Where did your love of preparing meat come from?

I think it started when I was a kid. My dad would take me to all the small butcher shops and smoke houses in the North End. He had all his stops [in the city] for his particular items, and the butcher who was always working the counter would give me pepperette, or a hot rod or salami or something. I just remember walking down the stairs of those places, and it smelling amazing and everyone was just in a good mood. I think that’s where it started.

What made you fall in love with charcuterie?

I’d worked in kitchens for a few years before I worked for Tristan [Foucault] at Peasant Cookery. But Tristan was the first experience where you saw someone bringing in whole hogs that were raised here in Manitoba. He was doing whole animal butchery and I think he was the first one to show me that cooking could be way more than line cooking and what I’d been experienced to do. It was more of an art for him; more of a craft.

I was a bit green when I was there, and didn’t get to do much hand’s-on charcuterie, but I saw that it could be done. I worked garde manger, so I was slicing all the meats for the charcuterie boards and I would eat so much salami – I’m not sure he’d want to hear that – and I loved it.

Did you know that charcuterie was going to be your new biz?

My favourite part of working at Nonsuch was doing the butchery and doing the cured meats and all that. And as the restaurant began to grow and get busier, I had less time for that stuff. And then when we shut down during the first round of covid and went to takeout only, suddenly more time freed up, and I was able to focus more on making salami and curing meats. And when I had that time, I was so much happier with the product and quality I was achieving.

After Nonsuch, the next day I began purchasing equipment to start this. Not knowing, or not having a plan – I just knew I wanted to stay busy and to do things that I wanted to do and hopefully there is some interest out there.

That said, once you have the equipment, you are still six to eight weeks from having product because the drying process is so long. I was just making rounds of salami every week, waiting for it to dry, before I could announce anything.

What does making salami entail?

I will ferment a batch twice a week. So the fermentation takes 48 hours, and then my dry time is anywhere from four to six weeks, depending on the size of the salami. So I don’t know how good that batch is until 8 weeks later, and meanwhile I’m making batch after batch, week after week, not knowing.

So when you start doing new things – like I’m starting to use more Manitoban terroir in them – it can be a gamble. But it has always paid off. Throughout the process, you are always monitoring the pH, the acidity, which will dictate that it is food safe and how tangy it will be. You are also continually monitoring water activity, so I know how dry the salami is going to be, the texture of it. Some of it you want a softer texture, some are served better if they are a little more firm.

How important is the pork you use?

For breed [of the pig], that can give you more fat content which results in more marbling in the meat, which is really nice. But, it’s not so much the breed as the way that Andrea [Zinn, of Zinn Farms] treats his animals. After visiting the farm and seeing him speak about, say, the health of soil. And how it all starts with healthy soil, healthy grass and pigs getting the best nutrition.

Ellement Wine & Spirits are going to be caring my stuff when it is ready in about a month and I have a couple new products that I just fermented this past week. One has ghost chilis my buddy Colin grows, so those one’s will be spicy. I also just picked up a smoker so the hot rods are back.

I’m working with more suppliers too. Jen [Regehr ] from Pineridge Hollow gave me a Berkshire-Hereford pig to produce some salami, and I’ll be making some salami for The Dogs Run Farm as well. And Andrea from Zinn Farms has also talked about doing local delivery through him too. So I’d really just like to make it more accessible to people.

You can order direct from Welchinski's here.