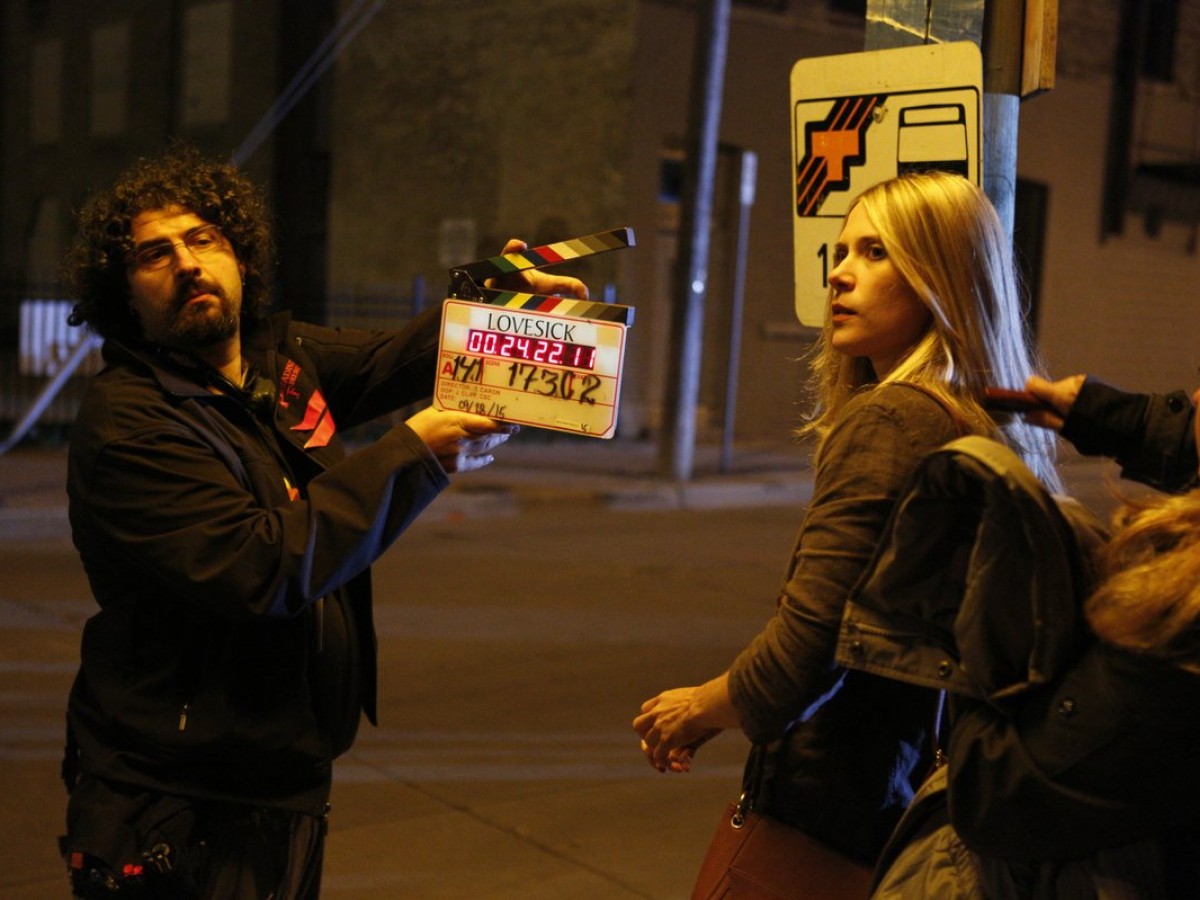 Actress Ali Tataryb preparing for a scene in 2016's Lovesick, which was shot and is based in Winnipeg (photo courtesy of Manitoba Film and Music)

See Winnipeg on the big screen (at home)

While we wait to welcome new visitors, we want you to know that we’ll always be here for you in the meantime – on your favourite tv and film streaming services.

Unbeknownst by many a visitor, Hollywood’s elite are often in Winnipeg shooting their latest films. We are frequently used as a stand-in for cities like Chicago, which is quite fitting as we used to be referred to as “The Chicago of the North” due to our unique turn-of-the-20th century architecture in The Exchange District. But that said, once you have a look at this list you just might think we should be vying with Vancouver for the title of "Hollywood North."

Either way, here are just a few ways you can experience Winnipeg right now on your own big screen.

The Assassination of Jesse James by the Coward Robert Ford – This picture brought some of Hollywood’s biggest names to town, including Brad Pitt back in his heartthrob days, where he was apparently met by adoring fans after dining at 529 Wellington. While it didn’t kill at the box office, this 2007 film made numerous top 10 lists that year. It has since become a critical darling, with many noting it as one of the finest modern westerns.

To stage numerous scenes in the film, parts of The Exchange District were transformed into a circa 1870s Missouri town (which makes sense as many of The Exchange’s buildings were built during his time).

The film is currently available to rent on YouTube and Google Play.

The late, great Philip Seymour Hoffman won the Academy Award for his title role in this 2004 feature. Winnipeg plays the role of Kansas in the film, starring the Manitoba Legislative Building. The film was also co-produced by Winnipeg company Eagle Vision Inc., who co-produced several films on this list.

Hoffman was said to have ventured out quite a bit in and around the city while filming, when he wasn’t on set remaining in character.

Capote is currently available on Amazon Prime and Netflix.

The city was astir when J-Lo was in town (with Richard Gere as her co-star nonetheless) for this toe-tapping feature film. This $75-million, 2003 production featured numerous scenes in Winnipeg's Fort Garry neighbourhood, while much of the film’s dancing takes place at the University of Manitoba’s Taché Hall.

You can immerse yourself in dance on Prime and Netflix right now.

Coinciding with the celebrations surrounding the centennial of the Winnipeg General Strike was the musical Stand!, which is based on Winnipeg writer-composer Danny Schur's play, Strike. It was directed by Robert Adetuyi, whose musicals include Bring it On! and Stomp the Yard.

Following a similar plot to the original play – but with a more contemporary feel –  Stand! feature’s Glee’s Marshall Williams in the lead role of Stefan Sokolowski, with Guardians of the Galaxy’s Gregg Henry as his father Mike. The film was shot throughout The Exchange District, where the actual strike took place 100 years ago.

While it has yet to have a North America-wide release (the film was in the midst of playing the US film festival circuit), the musical has won over many critics, including a four-star review from CBC.  It is scheduled for a full release once the COVID storm passes.

The newest addition to the cult hockey film hall of fame (if there is such a thing, it would also include 1997’s Slap Shot and 1990’s Perfectly Normal), Goon (2012) surprised many critics and is still certified 81 per cent fresh from critics on Rotten Tomatoes. The film stars Live Schreiber rocking a pretty solid handlebar moustache and Seann William Scott as the lead, Jay Baruchel - who co-wrote the film with Evan Golberg (Superbad and Pineapple Express) and it was directed by Michael Dowse (Fubar, It’s All Gone Pete Tong).

You can watch watch it now on Netflix, Prime, and Apple TV.

Lovesick is the directorial debut of local filmmaker Tyson Caron and it truly is an ode to the city – being both staged and shot here (the term used here by lead actor Jacob Tierney is “ferociously Winnipeg”). It stars Jessica Paré (Mad Men) and the aforementioned Jay Baruchel, while Winnipegger Matt Shellenberg (Royal Canoe) also did the Canadian Screen Award-nominated music for the film (the soundtrack also features Winnipeggers Begonia and John K. Samson).

Everywhere you look in this feature, you get a beauty shot of the city, from a crane shot looking down Arthur Street in The Exchange, to the Legislative Grounds, Saint-Boniface Cathedral Cemetery, Journey to Churchill at Assiniboine Park Zoo and The Tallest Poppy.

In fact, there are so many Winnipeg locations they made a whole video about it.

Writer/director Caron, we should note, also works on the Winnipeg-based CBC legal thriller Burden of Truth, which just finished season three. (On that note, here's our interview with the stars and producers of the show about filming in Winnipeg, while you can catch seasons one and two of Burden of Truth on Netflix and CBC online.)

Of course, you can’t talk Winnipeg film without My Winnipeg, legendary director (and Winnipegger) Guy Maddin’s surreal masterpiece (which has a 94 per cent critic rating on Rotten Tomatoes). It’s a full-on mythologizing of the city, featuring everything from horses frozen into the Red River, how the city’s inhabitants are namely all sleepwalkers and the greatest ode to the old Winnipeg Arena’s urinal trough.

A few more notable features shot here include Wild Cherry – a raunchy teen comedy vehicle featuring Kristin Cavallari, Rumer Willis and Rob Schneider, and The Lookout, which features Joseph Gordon-Levitt in the starring role with Winnipeg standing in for Kansas City, with much of it filmed in The Exchange District.

Winnipeg is also a place where many a feature gets the polished, special-effects treatment. Some of these blockbusters include The Italian Job, Paycheck, Resident Evil: Apocalypse and Swordfish.

As well, as we wrote back in November (didn’t those seem like simpler times?), Winnipeg is “ A hallmark setting for Hallmark (and Lifetime) Christmas films.” Former teen superstars like Chad Michael Murray (who once confirmed this to me at a bar in Chicago; seriously, super nice guy too) and Jodie Sweetin have all spent some time in The Peg shooting that wholesome goodness that only Hallmark and Lifetime can bring. You can find a full article on so many of these films that have been shot here in the above link.

Spot the landmark: The Royal Canadian Mint was used as a stand-in for the evil pharmaceutical company in A Constant Gardner. You see the Mint near the end of the film, a great film at that, which stars the incredibly talented Ralph Fiennes and the always-amazing Rachel Weisz.

As well, in the aforementioned Italian Job (2003), which featured the all-star cast of Mark Wahlberg, Charlize Theron, Edward Norton and Jason Statham, one scene focuses right in on The Manitoba Hydro Building, which is one of downtown’s largest and greenest buildings.

Winnipeg has also been constantly mentioned on some of the biggest sitcoms, as has been compiled on this YouTube compilation, "Does Winnipeg REALLY Exist?" Many shows mention our city including, How I met your mother, Grey's Anatomy, The Office, Futurama, 30 Rock, Newhart, Cheers, The Sopranos and perhaps our most-famous reference on The Simpsons.

Looking for more productions in The Peg?  Here’s a full list of recent films and tv shows that were shot here from our friends at Manitoba Film & Music.