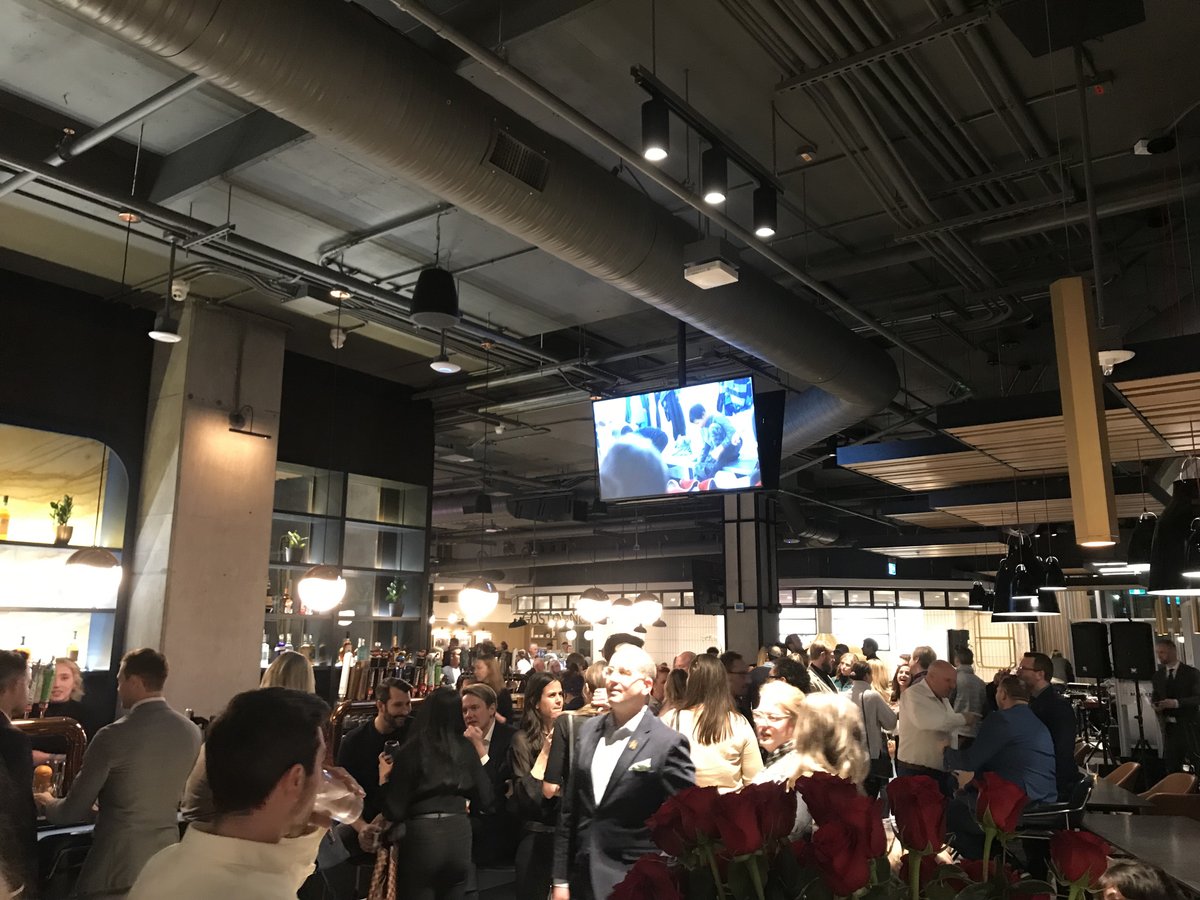 The packed house at the soft opening of Hargrave St. Market (PCG)

Not to gush, but you’d be hard-pressed to find fault with Hargrave St. Market, as they really have thought of it all. The food options cover all tastes and dietary restrictions, design buffs will be filling their IG accounts with every ounce of the space, and its location, right in the middle of downtown attached Bell MTS Place (meaning it is all connected via skywalk to all of downtown), is an absolute peach.

Indeed, Winnipeg’s newest culinary destination is so hot that Begonia played at the opening night party.* And much like her vocal chords, the place is jaw-dropping.

The general word last night was that this space does not look like Winnipeg, which is not a slight at all to our saucy city. Rather, it's a comment on how spectacular the space is, which occupies the second floor of True North Square.

It's also quite huge, holding up to 600 people.

When you enter via the escalators, you are immediately surrounded by everything you could ask for in a food hall – all of it from local restaurants.

Around the corner to your left is the lengthy Rose Bar, which serves craft cocktails with big cubes (the old fashioneds they were serving last night were excellent), along with wine and a lineup of local taps featuring most of the Lake of the Woods Brew Co. roster (who will be brewing soon onsite), Little Brown Jug and a couple numbers from Barn Hammer.

Across from it on one side is Miss Browns, where you can get everything awesome having to do with eggs and smoked meat. And get this, Miss Browns chef/co-owner Steve Tyrell (a most-excellent Aussie), was also the general contractor on their kiosk, and he created their wood countertop using an old fallen elm tree which he scored in East Selkirk from his uncle-in-law.

Beside it, beckoning you with a spinning spit of pork and pineapple for tacos al pastor is The Good Fight Taco (they were super flavourful), while beside that is Yard Burger, which last night was serving a wagyu beef slider and fried chicken burger with thick bread and butter pickles that they’ll sell hundreds of before games at the adjacent Bell MTS Place.

Forming a triangle in all of this is a big counter from Fools + Horses, where you can get their lineup of fabulous coffees, kombucha, juices, and more.

Should you keep walking past Rose Bar you’ll see an ample number of comfortable tables for eating, along with lounge areas from EQ3. Past that encompassing the top of the triangle of the space is Gusto North, which is [enter swear word] gorgeous.

This extension of Pizzeria Gusto has two wood-burning Neapolitan ovens that look out toward the bar. They have a counter in front of these two for orders, while just to the corner you can also walk into the full-service restaurant (after watching prosciutto being shaved on a flywheel slicer) , which mimics the recent design additions to the Gusto on Academy, with luxurious banquettes, four-top tables, and light fixtures that you'll now want in your own dining room (our graphic designer uses the term, “it’s so London chic”).

On top of those crispy-yet-chewy pies that keep visiting celebs and Jets players coming back for more on Academy, Gusto North’s menu also features a selection of pastas and small plates by two-time Winnipeg Canada's Kitchen Party winning chef Jesse Friesen, along with sous chefs Ana Damanskin and Satpreet Singh. (These chefs also run Yard Burger and The Good Fight Tacos, which is all under the Academy Hospitality banner).

Academy Hospitality is also doing Rose Bar, while come spring they'll have grocery store too on the first floor called Mottola Grocery. And on that note, you can't talk about this food hall concept as a whole without also giving a shout-out to Bobby Mattola (owner and president of Academy Hospitality) and Suzy Afifi (the director of operations) and their whole team for just killing it here.

Completing the triangle shape of the space is a huge counter called Saburo Kitchen by the Yujiro/Gaijin Izakaya team. They were serving mini bowls of their near-legendary dan dan ramen, which sees regular lineups at Yujiro on weekends, while the menu reads like a best of from both restaurants. The baos they were serving last night were delectable, including torched tuna and dan dan ones that I wish I could carry around in my pocket like Napoleon Dynamite with his tots. The counter features a full offering of nigiri, rolls and donburi bowls.

Across from Saburo, is the view into the Lake of the Woods Brewing Company brewery (which now puts Winnipeg at 16 breweries). You can see the brewers at work, while the tanks are visible through two-storey windows. LOTW Brew Co. also has a prime piece of real estate on the first floor, with a tap room and bar that sells merch with its own door leading out onto Hargrave Street. Here you can buy cans, get your growler filled and just have a beer (with food from upstairs) in a setting that mimics their Kenora, ON fire hall location with white tiles, pipe-lighting fixtures and a giant red buoy to boot (which yes, you must keep on your left when you are heading back toward town). Come summer, LOTW Brew Co. will also have a 50-seat patio on the sidewalk right outside their door. This all faces west, so it will be a perfect spot to have a beer and catch some rays.

The bathrooms too are stunning, but you really should just go see that for yourself, as there's only so much praise you should give in one article.

*As if this wasn’t enough, Winnipeg’s hottest 6’7 rock star Brendan Berg was also playing bass. We tell you, they really set the tone.