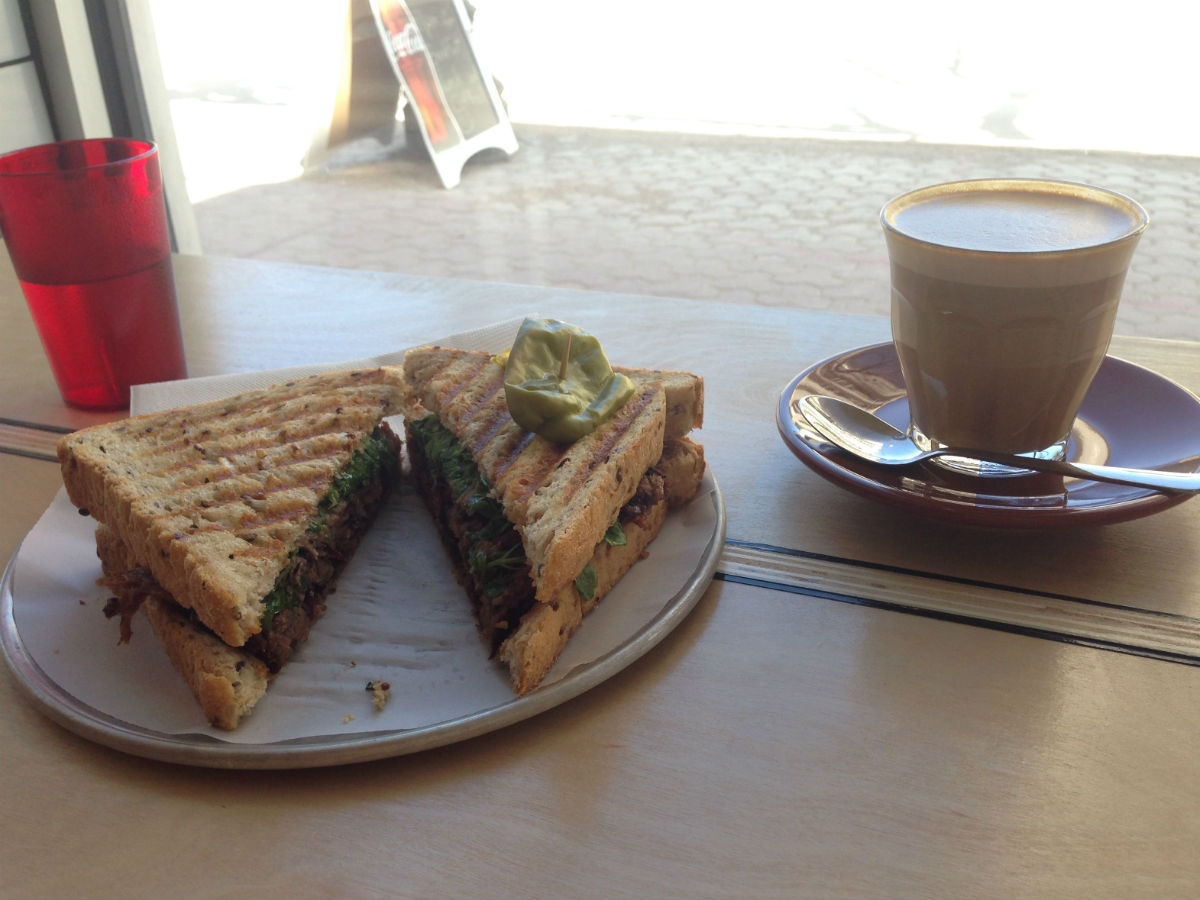 Update: This sandwich is no longer on the Menu, it was replaced by the Chicken Sandwich with Spinach, Mushroom & Harvarti

When you are still thinking about the sandwich you ate two hours after the fact, you know that you've had a pretty good sandwich.

Such was the case yesterday for my coworker Sam and I after we had our hands on Miss Browns' incredibly fine fare.

Later that afternoon we'd periodically come by each other's desk just to say, "but really, that sandwich. It was that good wasn't it?" Along with, "and how about that chimichurri sauce that went on the micro greens that accompanied that brisket?"

To say we were satisfied with our choice to split the Smoked Pork and Beef sandwiches would be an appalling understatement. Both meats had a crispy bark on the outside with a well-developed oak-smoke flavour, all while remaining moist. It made for a sandwich with robust textures and rich flavours in every bite as the meat, panini-pressed bread, and accoutrements performed a tantalizing dance on your tastebuds. 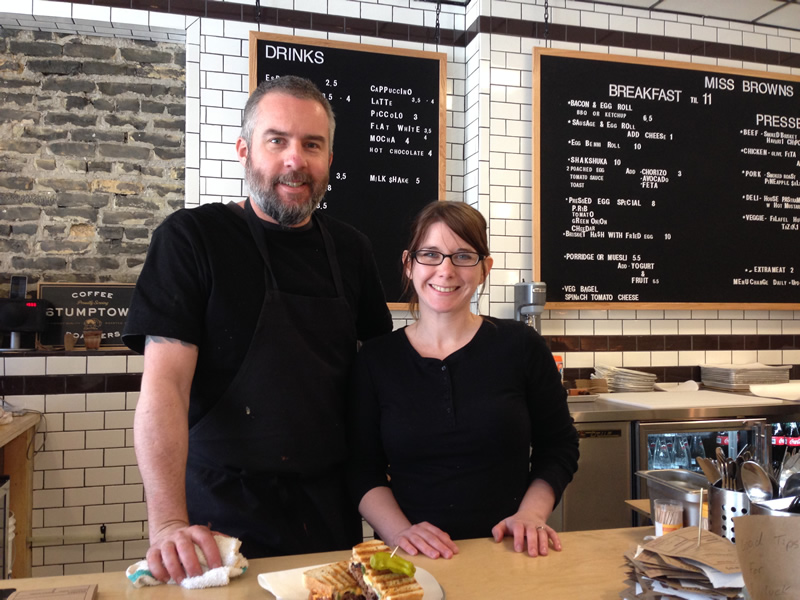 Steve Tyrrell, the Aussie who smoked the meat for these sandwiches, along with his wife Jenny (who's originally from Winnipeg), certainly know what they are doing when it comes to deliciousness. I guarantee it won't take long for Winnipegers to realize this.

As Jenny relates the story to me, this idea to open a cafe here was somewhat like their calling, one which started when they were living Down Under.

"I woke up one night at 1 a.m. and Steve was on his laptop.... looking at this little red smoker, and telling me, 'I know what I want to do,'" said Jenny.

"We'd been doing catering at Steve's mom's place -- she's got this boutique vineyard in Australia -- and we were making these lunches with these slow cooked meat sandwiches. Steve said, 'this is what we've got to do: we've got to move, we've got to buy a smoker, and we've got to open up this sandwich shop in Winnipeg.'" 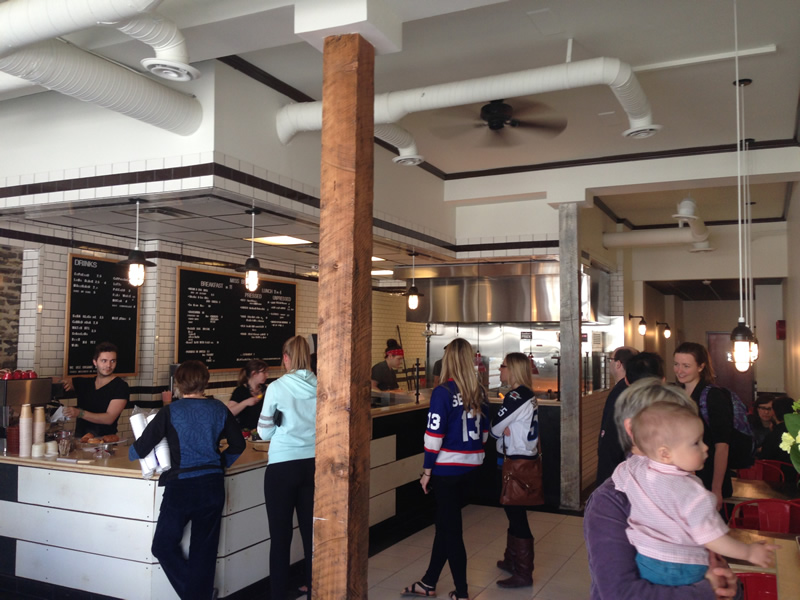 They've since been back in Winnipeg for just one year, working the whole time at converting this now charming location into Miss Browns, which opened on April 1.

The room itself, a converted Subway location which they painstakingly remade (at a cost upwards of $260,000) is quite pretty, with subway tile (I asked if that was a playful nod to the past occupants, but alas that was not the intention), a long communal table, and an open kitchen area that takes up about half of the room.

Steve's multi-occupational background helped him and his father-in-law transform the room into a mix between open-and-industrial and Parisian cafe. This includes the tables and counters which Jenny points out are: "reminiscent of Steve's artwork."

Jenny and Steve met in Bath, England, on a pub crawl (as you would when you are backpacking) and since have lived the life of Aussie-come-Canadians by doing the ski town circuit (Fernie, Whistler, Big White) while also working stints here in Winnipeg (back in 2003) and Vancouver. 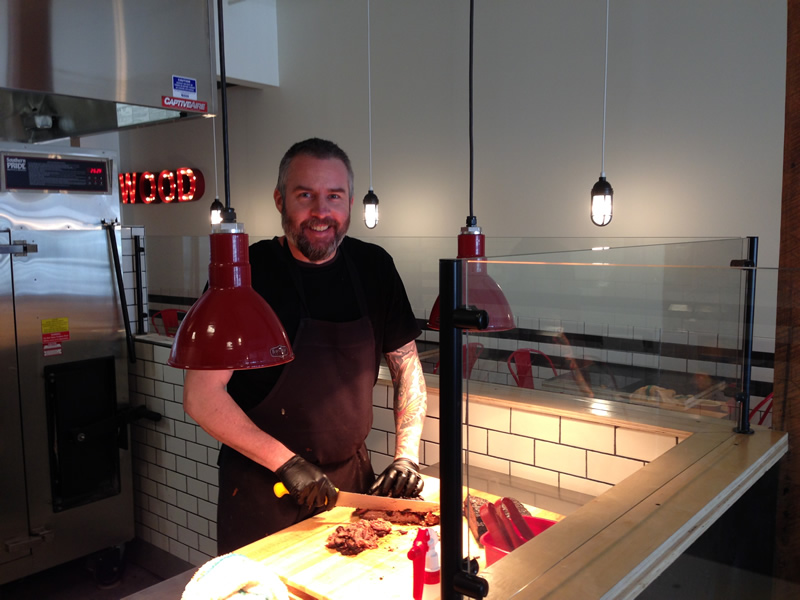 Steve working the brisket from the smoker (PCG)

Long story short, Jenny has worked in restaurants since she was 16, while a stint as a nanny in Vancouver rekindled her love for cooking. Steve has a Bachelor of Fine Art from the University of Newscastle, Australia (his work has been shown in galleries in Sydney, and he still works across several mediums), while he also attended the Vancouver Film School and has worked as a carpenter and a cook in multiple restaurants across multiple countries.

They always knew that they wanted to do this cafe, so let's get back to the meat of matter:

On Thursday their smoked pork sandwich was composed of baby rack ribs with pickled fennel salad and BBQ sauce while the beef (smoked brisket) featured a satisfyingly-garlicky chimichurri along with havarti cheese. It won't be this same combination tomorrow as the flavour combinations change daily, along with their selection of soups and salads.

At $10 per sandwich they may seem a touch steep, but once you realize the sourcing that goes into these beauties it's apparent they are right on the money (not to mention really filling). 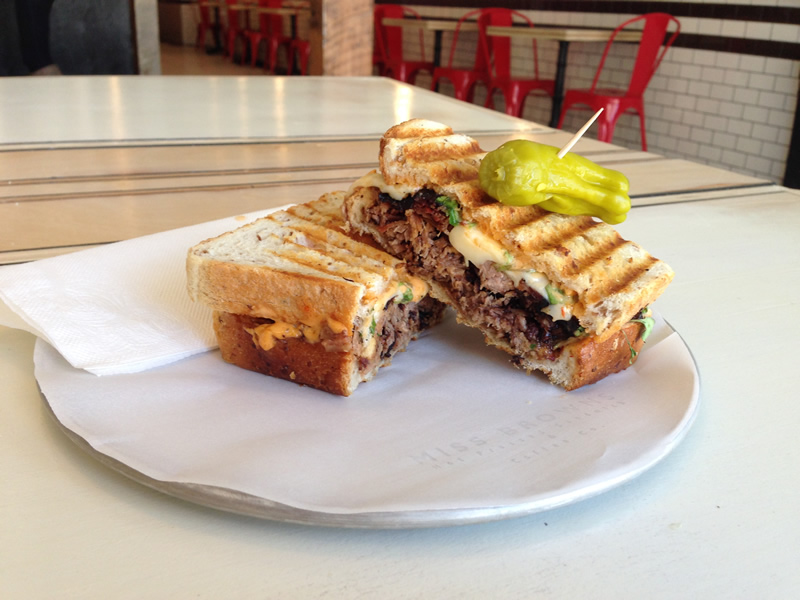 Like most eat-local proponents, the Tyrrell's are conscious carnivores, so it took them a while to find a source that they could really love.

After doing some research (and getting some local advice) they were hooked up with All Natural Meats in Carman, who process their own free-range cows in their own abattoir -- making the farm-to-table connection about as transparent as it gets.

It is much the same with their other ingredients; their green's are sourced from Braman's Greens -- as will be their vegetables this summer; their milk and cream is from Organic Meadows (grass-fed milk at that); the eggs are from Nature's Farms and the ice cream from Cornell Creme.

Sandwiches aside, Miss Browns also does breakfast with sausage rolls and bacon and egg rolls like you'd get in Australia, while they are hoping to become a destination brunch place on Saturdays with a liquor license allowing them to make caesars. 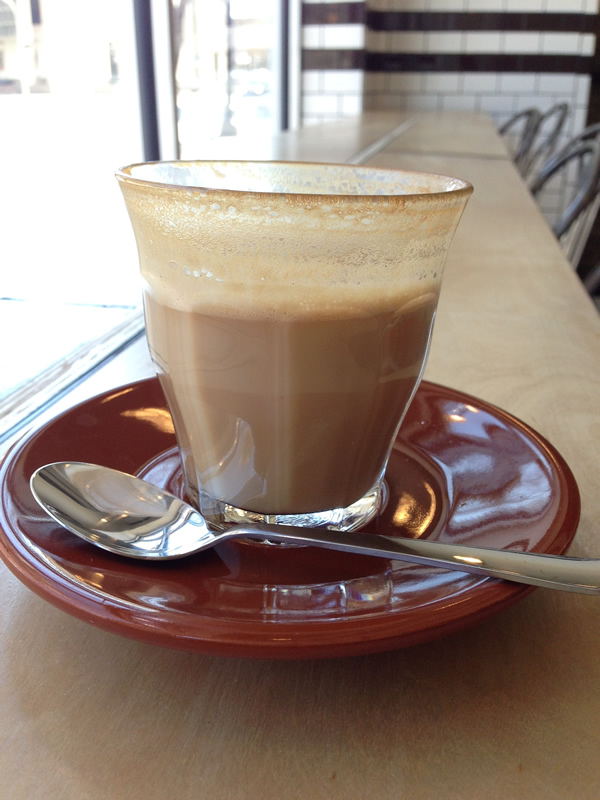 A flat white, minus a couple sips... I couldn't help myself (PCG)

They also make one of the best cups of coffee you can get in Winnipeg.

Miss Browns are the only people in the city I know who are making a flat white, where the top creamy layer is composed of micro bubbles that give the whole drink (which involves a double shot of espresso) an incredible mouthfeel. They also only use bean's from Portland, Oregon's Stumptown Coffee Roasters, which Jenny said has been quite the eye-opener.

"We loved their values and their samples, plus they flew here to train our staff," said Jenny. "They [Stumptown] will not sell to you until they send a trainer down to set up your machine and give you two full, eight-hour days of training."

"We thought it was a bit much beforehand, but they are very serious about their coffee, and it's been so worth it." 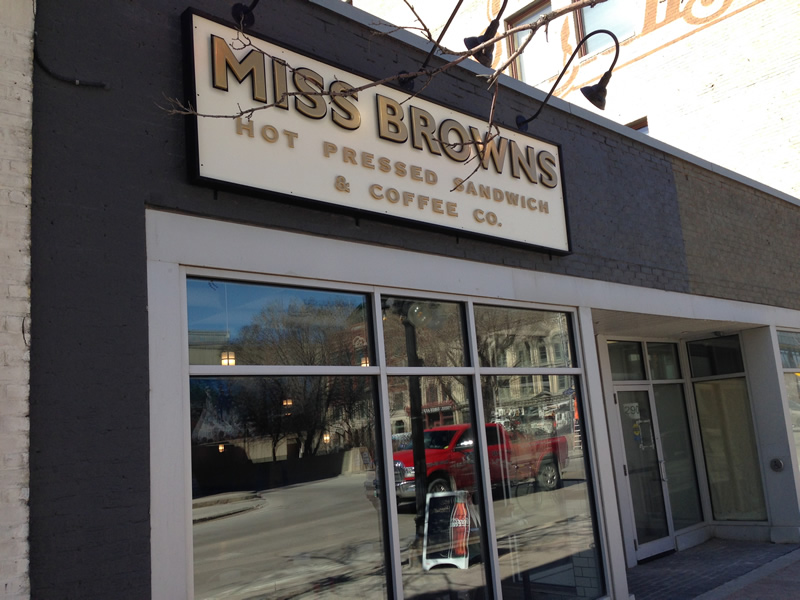 Miss Brown's is located at 288 William and is open 7 a.m. to 5 p.m., Monday to Friday and Saturday from 9 a.m. to 3 p.m. for Brunch. They are now also starting to serve wine and a daily feature cocktail if you want to wet your whistle at lunch.