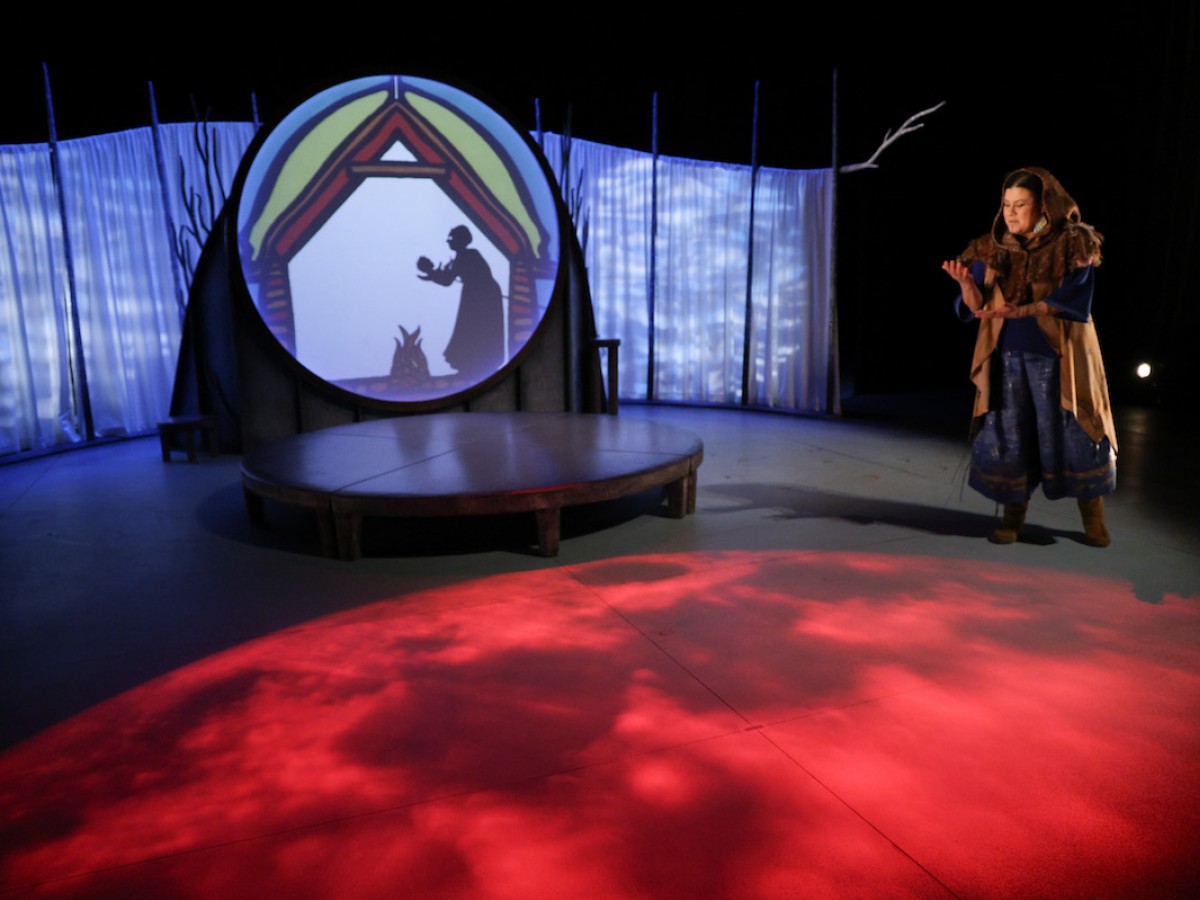 It’s been two years since Manitoba Theatre for Young People staged an in-person production in its theatre at The Forks.

That lengthy hiatus comes to an end on Friday, February 25, when the beloved company is finally able to present the world premiere of Frozen River, which had originally been slated to run in spring 2021.

The play is a collaboration of playwrights Michaela Washburn, Joelle Peters and Carrie Costello, who have already won The Sharon Enkin Plays for Young People Award for its script at the Playwrights Guild of Canada 2021 Tom Hendry Awards.

Frozen River tackles themes including reconciliation, environmentalism and interconnectivity, while its main characters are two 11-year-olds—one Cree and one Scottish—whose lives become intertwined in a forest which, one day, will become part of Manitoba. The actions during this period ripple through time and wash over their descendants, who pick up the story in modern day Manitoba.

To reveal more, we’ve reached out to Washburn, Peters and Costello to learn how Frozen River came to be, and how its big ideas will be grasped by your little ones. This award-winning team has collaborated on the answers below:

How is the setting of this region—a place that would become Manitoba—integral to the story?

We started this play researching in the Manitoba Archives, at the Manitoba Indigenous Cultural Education Centre and listening to stories gifted by Indigenous elders and knowledge keepers. We were struck by the parallel between the way the British treated the Scottish people overseas and how those same Scots treated First Nations people here in Manitoba. The characters in the story are from this region, this is the land where the maskeko-Ininiwak (Swampy Cree) have traveled and lived for generations. When we found a passage from Women of the Red River by W.J. Healy, it got our imaginations flowing. Healy references a husband and wife who stayed behind during a journey because the wife went into labour. We began thinking, what if that family had an older child? What if she stayed on the boats, but decided she needed to get back to her family? What if she got lost and needed help? What if she met someone her age who knew the land? That was the beginning of our story.

You are all from different artistic backgrounds and different areas of the country. How did this collaboration come to fruition?

Michaela and Carrie had worked together on a previous play for young audiences. We brought Joelle into this process for Frozen River.  All three of us share the desire to challenge audiences to think about big issues in meaningful ways for young people.  We want to offer something for the next seven generations, as youth are our future. For many folks, the first experience of live theatre is often in school. It is important to us to create relevant and intelligent stories that young people can identify with. It’s also important to create work that young people feel empowered by when they are exposed to it, both in terms of story and career possibilities.

The Moon Lodge set is striking, as is the shadow puppetry that will be brought to life on the Moon. Is this how you saw this script being staged?

We had some ideas but nothing definite. Theatre is ideally a collaborative process and we are delighted by the vision of the designers and directors and how it brings the world of our play to life.

As you’ve detailed here, this play was inspired by listening to Indigenous elders and knowledge keepers and exploring historical records at the Archives of Manitoba. It also covers connectivity spanning generations and reconciliation. How difficult was it to condense or portray these notions to a level that is accessible to kids aged 5-12?

In the writing process we were grappling with the very issues that we were trying to portray for our young audiences. What does reconciliation mean? How do we leave audiences with hope? Do we still have hope?

In writing for this age range you need to understand and honour the intelligence of children.  Their honest response to the work is very illuminating. Normally, we would have planned for test audiences in the development process, but COVID-19 prevented this, so we needed to rely more on our previous experience and young people in our lives.

The Making of Frozen River from MTYP on Vimeo.

What would you like both kids and their parents to get out of this performance and story?

Our hope is for families to be inspired to examine our relationships with each other and our natural world. How can we play active parts in ensuring the health and wellbeing of the water, the land, the animals and one another?

What’s the most rewarding thing about staging plays for children?

This is an audience with no pretense. They are relentlessly honest in their feedback and reactions to what is happening on stage. Work for young people has been crucial to our abilities as artists to tell the truth as storytellers. They hold you accountable.

Frozen River runs February 25-March 6 and is suitable for ages 5-12. For tickets and showtimes, click here.