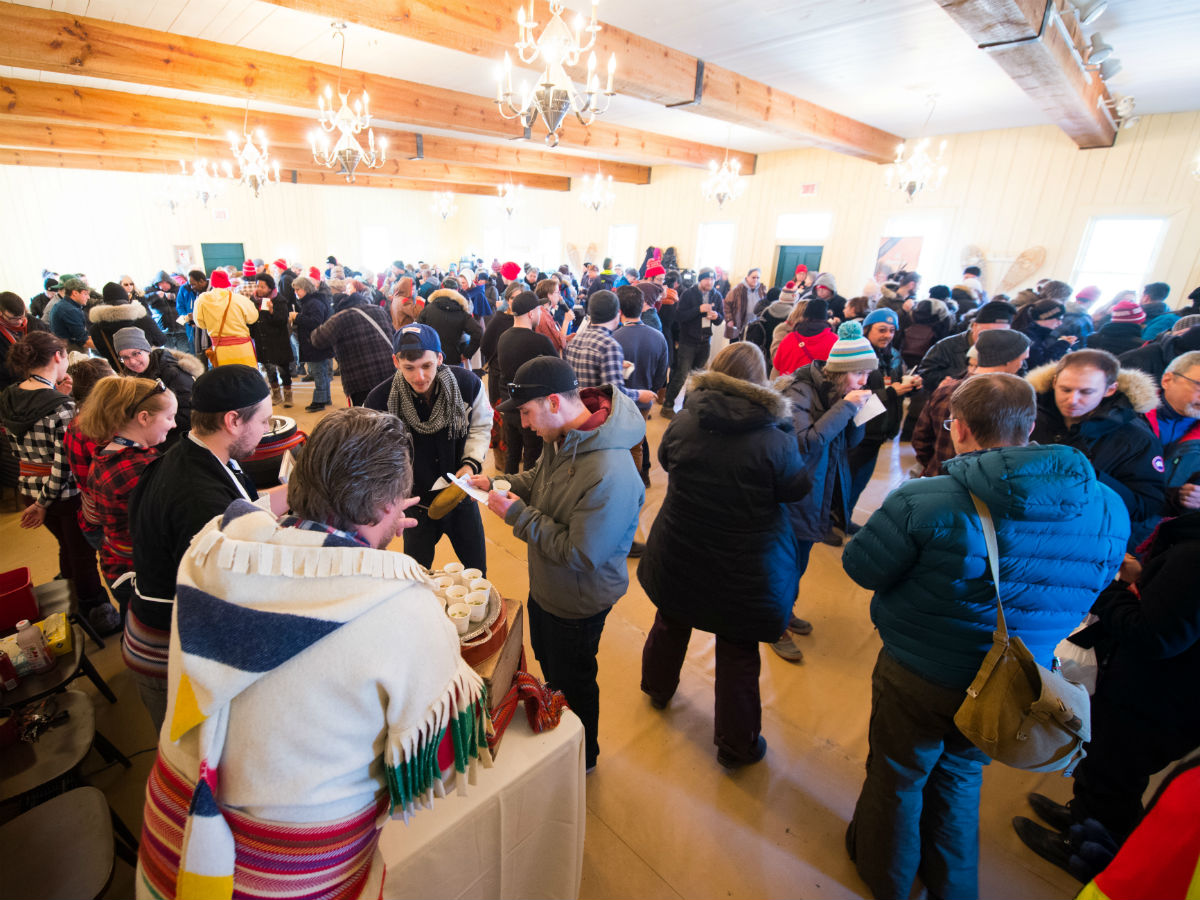 Feasting at Festival du Voyageur is one of our favourite things

With over 150 live musical acts, saucy costumed interpreters who will bring you back to the early 1800s, giant snow sculptures, and more merriment than seems imaginable, Festival Du Voyageur (FDV) is already an easy sell.

In fact, our German friends at Lufthansa Magazine just wrote a great piece about Winnipeg in the winter, wherein FDV gets some huge love in the end – particularly when it comes to Caribou (more on that to come) and dancing to live music on those wood chip-covered dance floors.

But for us, what really brings FDV over the top, is all that indulgent French food, especially when it comes to maple syrup, poutine, tourtière and more pea soup than you can fathom.

And that – pea soup – is just where we are going to start this gluttonous guide to FDV.

For starters, you can find many a pea soup on offer throughout the festival, at food kiosks from restaurants (and the local restaurants themselves) including Stella’s (in Portage Tent, at the Community Lunch and at their Centre culturel franco-manitobain location), Promenade Café and Wine/Fort Gibraltar Dining Corporation (located right inside the log cabin building – that being the la Maison du Bourgeois and the Pembina and Snow Tents) and from the good people of St-Pierre-Jolys in the Cabane à Sucre (more on that to come).

While all these pea soups are marvellous in their own (traditional) right, if you want to see and taste the humble Pisum sativu brought to a whole new level then you must attend le Rendez-vous des chefs – the annual pea soup contest which also happens to be one of the final events of FDV (Sunday, February 25, at 2 p.m.).

This year the field is stacked, with soups from The Mitchell Block – who will be looking to defend their Judge's Choice title, following up on their entry that featured fresh pea pasta, XO sauce and all manner of pork – Promenade Café and Wine (a multiple winner over the years), Forth, Clementine (who will be defending the People's Choice title), Nofu Catering (a vegan, plant-based catering company, which we are very excited about), Bouchée Boucher, King + Bannatyne, Stella’s and Miss Browns.

Just think of the possibilities of accoutrement, stocks, and pork renditions (or should that be renderings?) you will see on these soups when you have a field that includes Winnipeg’s best brunch, sandwich and French restaurants. Plus, you’ll get to hear live banter that is surely saltier than all the soups combined from three judges – including the very person writing this.

The most Instagrammed item you’ll find at FDV is the maple taffy, which you’ll find queues for snaking into the Cabane à Sucre. The crew from Saint-Pierre-Jolys, led by the most-excellent Roland Gagné, brings in roughly 350 gallons of maple syrup from St-Jean-Port-Joli, Quebec, which they then reduce and pour onto snow for you to twirl your stick up on. It’s heaven. (As a bonus, you should also check out  St-Pierre Joly’s Sugaring Off Festival, which takes place mid-April where you can try real Manitoba maple syrup that the community produces).

While talking syrup, we should also note here that Stella’s tourtiére ($6) is going to be served with a maple cream sauce, which is terribly exciting.

Another product from Quebec that is an FDV essential is Caribou, a mix of red wine, whisky and maple syrup (or sugar), that you can get served in ice glasses at the Snow Bar. Due to its sweet nature, we recommend that you pair it with some mashed potato poutine – whose topping options are pulled pork, tourtiére or vegetarian, all covered in gravy, cheddar and onion, from Fort Gibraltar Dining Corporation. They also do a smoked turkey leg, which is brined for 24 hours, then braised for five hours in turkey stock and brown sugar, then finished on the smoker – making for a confit-tender meat – which is surely one of the most hands-on things to eat at FDV.

Off-site, along with several local restaurants that serve special FDV menus, you can also enjoy a meal right on the frozen Assiniboine River at The Forks as part of Rendez Vous on Ice from Evolve Catering (February 16 to 19). They’ll be serving breakfast from 7 a.m. to 10 a.m. on the 16th, while the regular menu is full of beauties including mac n’ chees bites (3 for $5), shepherd’s pie potato skins ($6), and a smoked meat sandwich on bannock ($8) and a selection of sweets including maple taffy and a s’more brownie in a cup ($6). Best of all for adults, this year’s alcohol assortment will include a maple vodka from Nova Scotia that we are told is as good as it gets.

There will also be food trucks on hand on the Fort Gibraltar park grounds. While there will be the usual suspects slinging poutine and beaver tails (an FDV must) you’ll also find taco truck Habanero Sombrero, who will be serving a special French-Canadian burrito along with more Mexican-style burritos and sweet ones too.

Finally, because FDV is le grand fromage of winter festivals, it is only fitting they also celebrate with some local cheese. New to this year will be the Bothwell Cheese Carving Competition (Sunday, February 18 in the Université de Saint-Boniface Portage Tent), wherein spectators will get to see competitive carvers work their magic on 18-kilogram blocks of cheddar. While the finished masterpieces won’t be devoured, there will be cheese samplings on hand in the tent.

In sum, bring your loose pants and dancing boots out to this year’s Festival, because you’ll want to be comfortable when working off those calories on the wood chip-covered dance floor.

To purchase tickets and for more info go to heho.ca