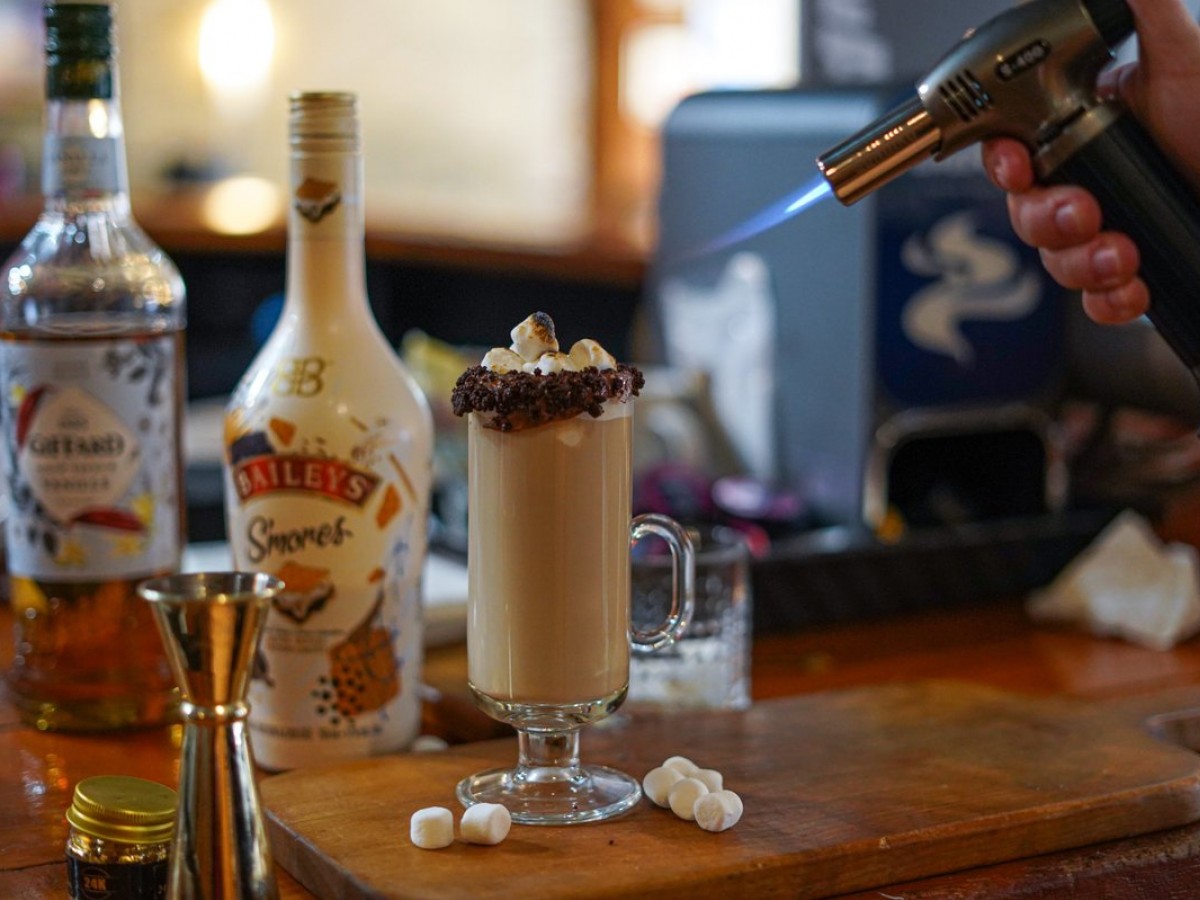 Hermanos' entry, The Golden Oak, getting torched before it gets smoked (Maddy Reico)

These fancy, hot (and often boozy) drinks are the perfect complement to your shopping

The Exchange District’s red hot culinary scene is bringing even more fire (in one case, literally) from December 5-10 as Hot Beverage Week returns.

During this period, 17 of the District’s top cafés, restaurants and distilleries will be making magic with espresso, tea, hot chocolate, vodka and even beer to create drinks that will warm both your belly and soul, all while giving you even more reasons to take some beverage breaks in between shopping stops.

You can vote for your favourite on The Exchange District Biz’s website (the fantastic organizers of these tasty times) to determine whose creation will take the cake, which is currently being defended by Cake-ology (more on that below).

Here’s a preview of what’s in store, while you can find even more on the Biz’s Instagram.

As you’ll see in the above video, Hermanos is playing on that old adage: “smoke ‘em if you got ‘em.” The Golden Oak is an over-the-top creation that brings the joy of campfires to this South American steakhouse. Over a drink of espresso, steamed milk, Giffard vanilla syrup and S’mores Baileys you’ll find mini marshmallows that have been torched, along with a rim of chocolate cookie crumble held by Nutella. Taking it even further is a touch of gold leaf while the whole drink gets smoked with oak via a smoking gun before being unveiled tableside from under a glass dome.

Patent 5 Distillery is infusing its ultra-smooth vodka with cocoa to create a hot chocolate (the Bark + Bite) that also features raspberry liqueur and Amaretto. To round it out with some nuttiness there’s pistachio whipped cream too. Rum lovers will relish Cibo Waterfront Café’s Spiced Apple Pie that combines the rum of the season (that being spiced) with cinnamon and whipped cream.

Across the Board Café, which across the board always has great drinks, is doing a take on classic Canadian dessert by using custard, coconut and chocolate to create a Nanaimo bar hot chocolate into which you can also add a shot of Baileys.

Amsterdam Team Room is renowned for its tea cocktails. For its entry, the team is promising a profile of warm, smoky, sweet and salty by combining Lapsang tea with whisky barrel bitters, sea salt and Laphroaig Scotch. Peasant Cookery’s The Duke of Suffolk is made with a clear spirit–Hendrick’s gin–combining those boozy botanicals with red rooibos, simple syrup, Earl Grey and some whipped cream for good measure.

Beery and bold ones to mull over

Even the breweries are getting in on this hot beverage action. Nonsuch Brewing Co. is combining its malty, high ABV Bière De Garde with a Malbec wine to create an homage to the Caribou liqueur we all know and love from Festival du Voyageur. This drink–the Caribière–also features maple syrup, dried orange and warm spices to give you that mulled wine feeling.

Little Brown Jug is using its Monarchy English brown ale as the base to create the “Sugar, Spiked + Everything Nice!” This toasty number features Frangelico, coconut whipped cream and Camino hot chocolate too, while you can get a vegan version, or one using Baileys Almande instead of Frangelico. Altogether it will be chocolaty, nutty and warming like a blanket left in front of the fireplace.

Dessert in a mug (that you can also get to go)

While you can’t take the boozy beverages to-go (aside from Across the Board's, should you choose no Baileys), you can take all the following drinks with you to explore the Exchange’s handsome streets whilst you shop.

Let's start with the defending champion, who last year presented a drink that had a flowering marshmallow that opened when placed on your drink (chef Austin’s skills are unparalleled when it comes to the sweet stuff; click the link in the lede). This year Cake-ology’s hot chocolate will feature leche flan foam and milo dark chocolate, and will satisfy your sweet tooth.

Not to be outdone will be Clementine’s The Banana Stand. As one of the country’s top brunch spots, where everything is generally perfection, Clementine has designed a drink entry featuring local Little Sister’s Stargazer espresso, white chocolate ganache and toasted peanut and muscovado sugar syrup. We personally guarantee a great mouthfeel. Another fruit-forward rich drink comes courtesy of Bronuts, which has crafted an orange cinnamon latte with two shots of espresso, maple leaf sprinkles, orange syrup and orange zest. Be sure to get a mochi doughnut while you are there.

Parlour is going German with a Black Forest mocha using house-made cherry syrup blended with their top-notch espresso all topped with whipped cream and chocolate shavings and yes–a cherry on top. One of Italy’s most-famous desserts comes in a cup form from Harrison’s Coffee Co, who is bringing a tiramisu latte to the party using lady fingers, pudding cream and chocolate drizzle on an almond vanilla latte.

One that sounds particularly mint is  Colosimo’s After Eight, which pays homage to the classic chocolate mint by using caffeine-free NUMI Moroccan mint tea and white hot chocolate. Bodegos’ “Hot Cocoa’a’Gogo” has a shot of nitro coffee, hot chocolate and condensed milk and toppings of whipped cream and chocolate shavings handsomely served in a jar. Newbie Más Coffee’s "Navidad latte" wishes you a happy holidays with a double shot of Honduran espresso, rambutan and pineapple syrup, and steamed milk with a spicy hint of ginger. It’s like a vacation in a cup.

And finally: King+Bannaytne, which has a knack for culinary competitions like this, is serving a blueberry coconut white chocolate tea using blueberry herbal tea from Amsterdam Tea Room, toasted coconut, black currants and cinnamon with a rimmer made with Boo-Berry cereal.