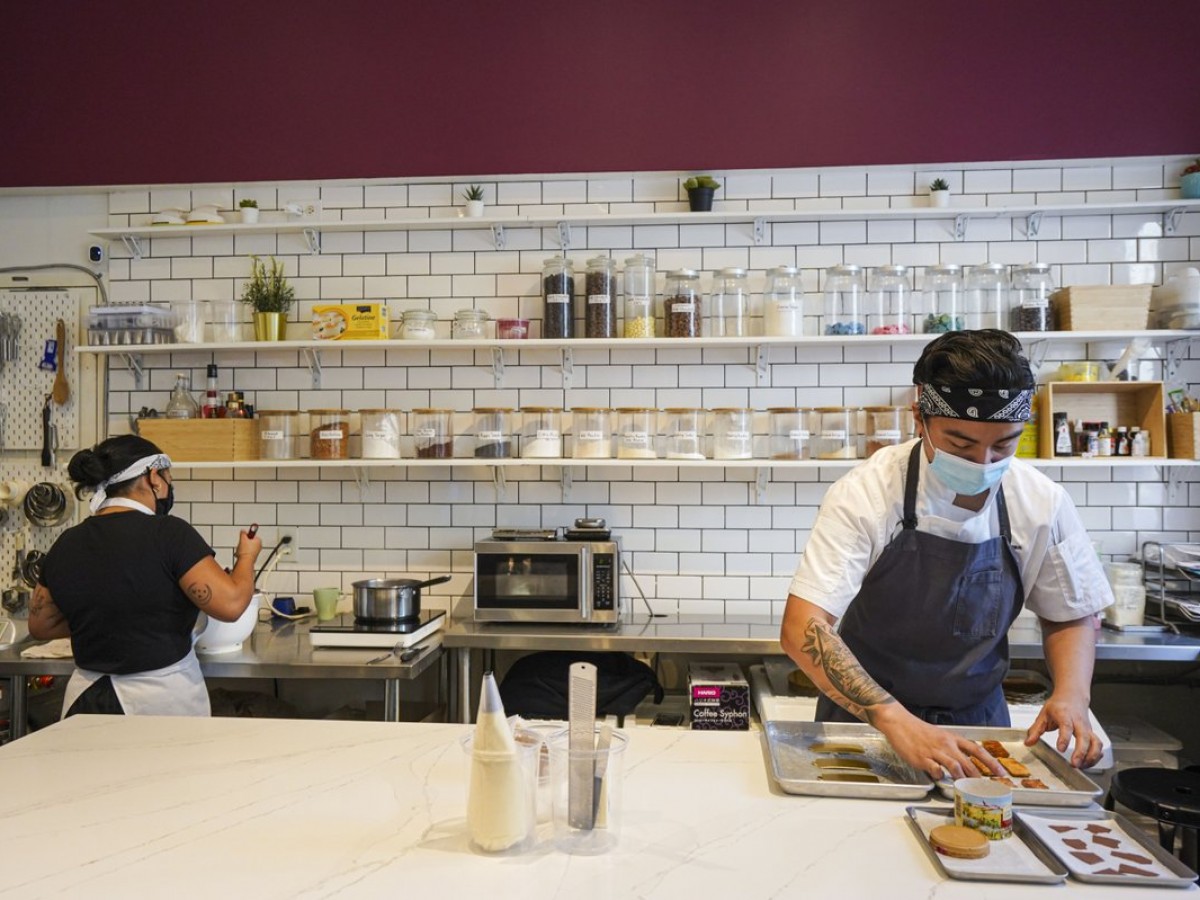 If you’re a fan of flaky pastry that make makes you moan, Cake-ology’s counter is where it’s at.

Everything we’ve tried—from the mille-feuille to the cookie pie and the kouign-amann—had us closing our eyes to savour every moment. Once you hit that delightfully crisp texture of flaky pastry, you're then treated to an experience where all the flavours start to melt on your tongue performing a fine balance of sweetness, a touch of tartness and then an amalgamation of all it amplified by a sprinkle of fleur de sel.

These creations are gorgeous, both on the palate and on the eye and how could they not be when you look at the international pastry pedigree of Chef/Co-Owner Austin Granados, who can drop the names of more famous chefs than a late 90s rap collaboration.

This includes The Four Seasons in Vancouver, then the Rosedale Golf Club in Toronto under Bertie Tanaya, followed by New York City under famed pastry chef, Dominque Ansel to learn, in the words of Granados, “Viennoiseries, French pastries and of course, his famous cronut.”

From there, Granados was off to Hong Kong work to work at VEA, which is ranked one of the 50 best restaurants in Asia (it was #12 at the time he worked there) and currently sits at the 71st best restaurant in the world.*

(In the video below, you can catch some of VEA's influence in his mille-feuille.)

Then it was Hotel X in Toronto, before heading over to Copenhagen in 2020 to do a three-month internship at, you guessed it, Noma.

“At Noma, we got to play around with their local ingredients like juniper berry and young, candied pinecones and all these different flavours that I now want to bring back here to Winnipeg,” said Granados. "It was amazing, we did a bunch of everything, including so much on fermentations too."

Grandos is born and raised in Winnipeg and attributes his love for cooking to his grandmother. He went to culinary school at Vancouver Community College where he graduated in 2015, after winning gold at age 21 in Skills Canada’s national competition in baking and pastry arts.

Cake-ology was founded by Chef Pamela Kirkpatrick in 2008. She opened the now-iconic location with its giant tiered-cake sign in the Exchange District in 2010, winning plenty of fans with her custom cakes and outrageously good cupcakes, before selling the biz in 2015.

Granados and his business partner Bien Cudia took over Cake-ology this past summer, reopening in the spring of 2021 with a new focus that emphasizes classic French pastries with Asian influences—like salted duck egg—that gets run through a microplane over the mille-feuille to add an umami element.

The new Cake-ology has already found plenty of recurring customers in the area, including the space’s founder.

“I’m loving what he’s doing,” said Kirkpatrick. “It’s comforting to see him have success and to see the Cake-ology legacy continue.”

In the above video, Granados shows us how he puts together his favourite flaky puff pastry, the mille-feuille, which he learned under Dominque Ansel. It is buttressed by a silky lotus seed paste diplomat cream, lines of red date caramel and chunks of milk chocolate.

As Granados states, "It's a classic French pastry with the flavours of Hong Kong." As we state, "Yes, please."

Cake-ology is open Tuesday to Thursday, 7 a.m to 2 p.m., Friday & Saturday, 10 a.m. to 5 p.m., Sunday from 10 a.m. to 3 p.m. On top of an ever-evolving selection of pastries, you can also get espresso (made from locally roasted DeLuca’s and Harrisons Coffee Co.), while custom cakes are still available upon request.

*Regular readers will also notice BRAT in London on this list (#78), which is where chef Keegan Misanchuk of Two Hands was cooking in England last year before returning to Winnipeg.