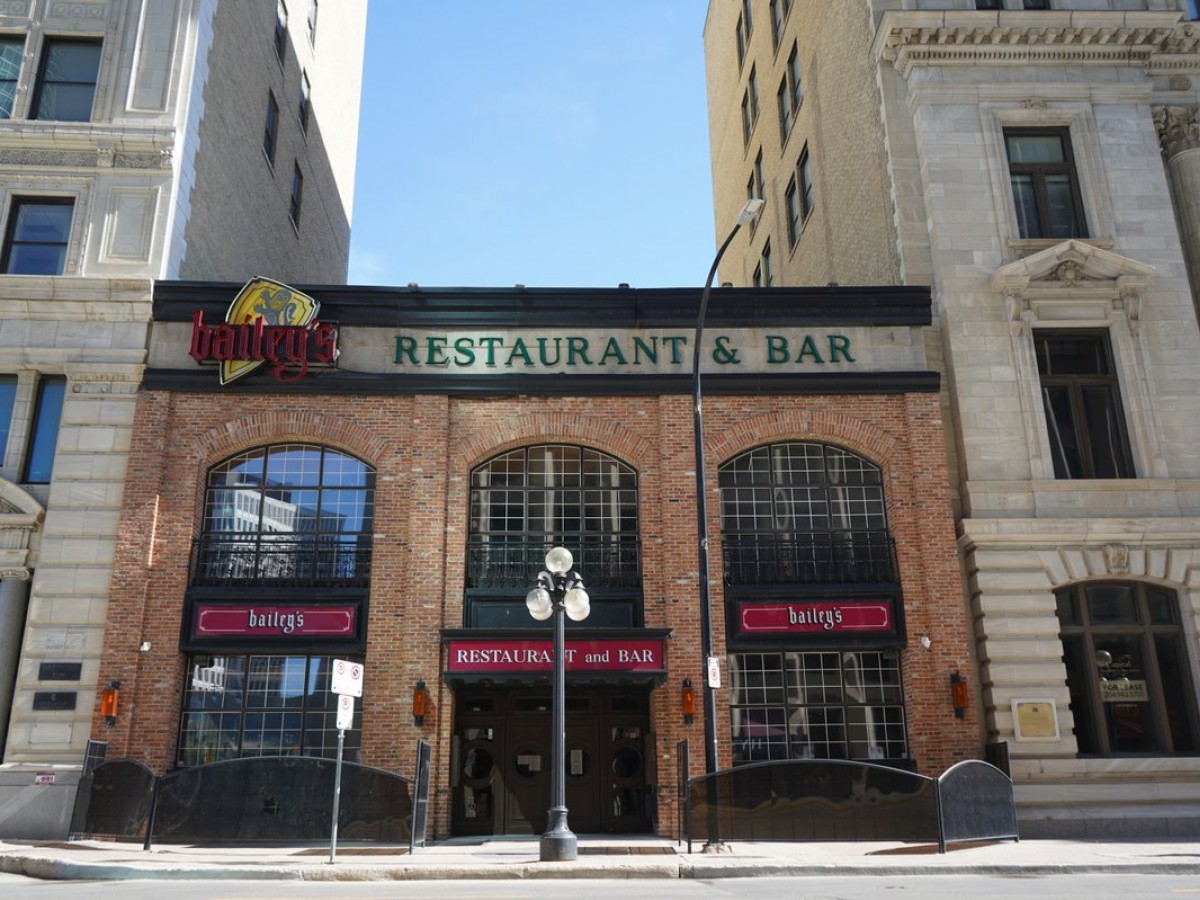 A side of nostalgia comes free at these iconic city locations

While the pandemic has brought an end to several of the city's best restaurants, most notably Segovia and just this week  Black Bird Brasserie, some of the city's oldest institutions have continued to serve, with no signs of slowing down.

Most of these rooms have survived more than 60 years on top of these last 15 months—which really should count as an extra decade (it sure has felt that way) — and they are here for your patronage while providing a side of nostalgia.

Here they are in alphabetical order.

Bailey’s restaurant, located in the heart of Winnipeg’s Downtown, has never lost its old-timey and distinguished feel. Bailey’s was established in 1971, but the building it is located in was erected in 1900. The packed wooden-book cases and leather chairs make it feel as though you’ve stepped through a time machine and makes you want to grab a glass of scotch and cigar (which is obviously not allowed) and enjoy a well-executed filet mignon in Don Draper fashion. The staff is also top-notch and when in-room dining recommences Bailey's distinct rooms will welcome you with plush chairs in a white tablecloth setting.

Bistro Dansk is the oldest location amongst the hip booming restaurant scene on Sherbrook Avenue. This small, yellow diner has been providing some of Denmark’s best comfort food dishes for over 40 years and has some of the best schnitzel in Western Canada. The portions are huge, the food is sublime, and the name kind of makes you want to dance. Owners Paul and Pamela Vocaldo have a storied history with the place, with Paul's mother first showing him the ropes when he was 14 years old back in 1977.

The Iconic Bridge Drive Inn (BDI) is Winnipeg’s oldest and most reputable ice cream vendor. This small striped parlour in Winnipeg’s south end has an amazing view adjacent to the Elm Park Bridge (hence the “B” in BDI)  and offers specialty cones and “OGs” like Banana Bonanza, Cookie Monster, and Peaches ‘N’ Cream. The owners, Jessica and Justin Jacob, purchased this icon from Wanda and Allan and Rutherford, Jessica's grandparents. The building itself was designed by architect Leslie J. Stechesen, whose other notable works include the Royal Winnipeg Ballet School. Learn more about BDI's lineage in this piece by Dianne Doney.

With the closure of Pizza Place years ago, Gondola now wears the crown of Winnipeg's longest-running pizza joint, being "the home of the thin crust" since the mid-60s. The first location was on the corner of Oakenwald and Pembina and it has since expanded to 10 spots in the city, along with locations in Brandon, East St. Paul, Falcon Lake, while also crossing the border into NWO with Red Lake and Kenora. It's a local success story.

Dairi Wip has been located on Marion Street for over 60 years and has maintained its reputation as one of the best spots to grab a Fatboy and fries in Winnipeg. It’s hard to miss this small joint with the giant neon “Dairi Wip” sign almost as big as the building itself, and it still continues to be a neighbourhood favourite in the area, even with a flashy A&W trying to move in on its turf.

Good Earth is Winnipeg’s longest-standing Chinese restaurant and has been operating in Winnipeg for 69 years! After moving four times around various parts of the city, Good Earth is currently located on 1849 Portage Ave., and offers all the Western Chines staples and so much more. It is hard to miss Good Earth with its beautiful, traditional mural wishing everyone a very warm “Welcome to St.James.”

The city's oldest still-running bakery changed hands in 2019, from the Gunn family to Jon Hochman, whose food is influenced by his Jewish lineage. It dates back to Oasis Deli from the 1930s to the ‘70s, which was owned by Jon's cousins Ben and Sam Hochman. (In that link, you'll also see Jon was the man behind Sherbrook Street Deli, one of our favourite spots in the city that is now no more). As you'll read in Bartley Kives' CBC article here, previous owners Bernie and Fyvie - whose father started Gunn's in '37 - knew their storied institution was in good hands with Hochman, who had been a customer since he was a little kid. You can find their huge kosher selection of baked goods here on the website.

Hy’s Steakhouse and Cocktail Bar first opened its Winnipeg doors over 60 years ago as Hy's Steak Loft on Kennedy Street. In 2005, it moved to The Richardson Building at Portage and Main with the fine-dining establishment offering a distinguished experience replete with beautiful murals, chandeliers, and of course, well-marbled pricy cuts of premium beef.

Another downtown icon is Ichiban, the city's bustling teppanyaki joint. Its skilled chefs first began flipping, flaming and dicing dishes -- much to the delight of diners seated around its flattops -- back in April 1973. The location beside the RBC Convention Centre makes it a favourite for groups along with being a fabulous choice for families, as kids can't get enough of the performance along with those kawaii cups they serve little ones. Stay tuned to Ichiban's website for when it will open after restrictions lift. Easily one of the coolest dining rooms in the city too.

Marigold restaurants have been operating in Winnipeg for more than 60 years, having entrenched themselves in the city's Chinese cuisine scene. This establishment offers a mix of Chinese and local dishes -- including walleye and chips -- with all the classics like chop suey, lo mein, egg rolls, won tons, and so much more.

It is almost impossible to have grown up in Winnipeg without hearing about Mitzi’s Chicken Fingers. The classic peg institution was established by Shirley Eng more than 40 years ago, after moving to Winnipeg from Hong Kong. Mitzi’s offers some of the best, you guessed it, chicken fingers west of the great lakes and is nationally renowned as one of Winnipeg’s best. It truly is part of Winnipeg folklore, appearing in numerous publications including Atlas Obscura. Mitzi’s roughly translates to “good food” and we couldn’t agree more.

Winnipeg's second-oldest still running deli is directly connected to its oldest, as Myer Ludwig, the founder of Myer's, was one of four brothers who owned Oscar's Deli, which you'll learn more about below. Since 1958, the location of Myer's at 1842 Grant Avenue hasn't changed, nor have many of its recipes, like the classic vinegary coleslaw. The new owners, siblings Harrison and Amory Steek (the nicest people, btw), have continued to do an admirable job with the place since taking over a decade ago, ensuring classics stay on the menu while adding new things like our personal favourite, the Coney Island -- a grilled sandwich with turkey, brie, caramelized onions and mayo on rye. Great website too.

The second oldest restaurant on this list (and probably the biggest hidden gem) Nick’s Inn has been operating for more than 80 years in Headingley, MB., just a few minutes west of Winnipeg’s perimeter highway. The tiny restaurant seems to be frozen in time, covered in checkered tile and cherry red furniture. This spot offers a nearly-perfected sandwich, burger, or breakfast with close to 100 years of experience.

A Winnipeg tradition, the Original Pancake House opened in 1958 on Pembina Ave. and currently has three locations throughout Winnipeg. The Original Pancake House is best known for well... pancakes, but did you know they were originally called “The Original Chicken House?” They’ve recently begun re-entering fried chicken to their menu and we, for one, are thankful these restaurants are embracing their past. I mean, who doesn’t love fried chicken?

For more than 90 years now Oscar's Deli has been serving the city some of the finest deli fare you will find. As you can  read in our 2015 profile, owner Larry Brown, who purchased Oscar's in 1979 and runs the spot with his daughter, Rachel, first started coming here when was a kid, while he jokes Rachel has been involved in the biz seemingly since the age of four. Originally located on Main Street, Oscar's has been located at 175 Hargrave St., right beside the RBC Convention Centre, since 1982. It's a must-visit downtown and the oldest spot on our list.

Winnipeg's castle, the stately The Fort Garry Hotel, opened on December 11, 1913, the day before the most famous would-be illegal art sale in history (that would be when that rascal Vincenzo Peruggia attempted to sell the Mona Lisa in Florence). Since then, its interior has continued to enchant diners, with the oval-shaped dining room guaranteed to bring a smile to everyone's face, particularly when someone is tickling the ivories as diners start their evening with a martini. At the moment the lounge is closed, but very soon it will pounce (much like Peruggia pounced on that painting from the Louvre on August 21, 1911) back onto the city's culinary scene with aplomb, so stay tuned for details.

Winnipeggers have been driving past the “Rae and Jerry’s” neon sign for well over half of a century. Established in 1957 and located adjacent to CF Polo Park, this steak house continues to provide great cuts of meat, delicious desserts and an iconic lounge atmosphere. The fact that a tin of tomato soup counts as a side, and that the room itself could easily make the cut in any Tarantino film, ensures its legendary status. And don't even get us started on those magnificent red clicky pens.

This family operated business has been running for more than 60 years on St. Mary’s Avenue. Most Winnipeggers would know exactly where this small, bright-red diner is from the large “Coca-Cola” mug elevated over 30 feet in the air.  Red Top offers vintage diner dishes like burgers and fries, chicken dinners, and hardy breakfasts.

Salisbury House has a long-standing and foundational history in Winnipeg. The original Sals opened in 1931 and since then locations have popped up all over Winnipeg. Sals is responsible for coining Winnipeg favourites like “nips” and is probably the frontrunner as our grandparents’ choice for “the best restaurant in Winnipeg.”

The red neon horns hovering above the Silver Height Restaurant have been glowing since 1957 and act as a beacon for one of western Winnipeg’s oldest and most valued restaurants - particularly when it comes to ribs. The Heights has become a staple in wings and karaoke, and home to many celebrating community events like Jets and Bomber games.