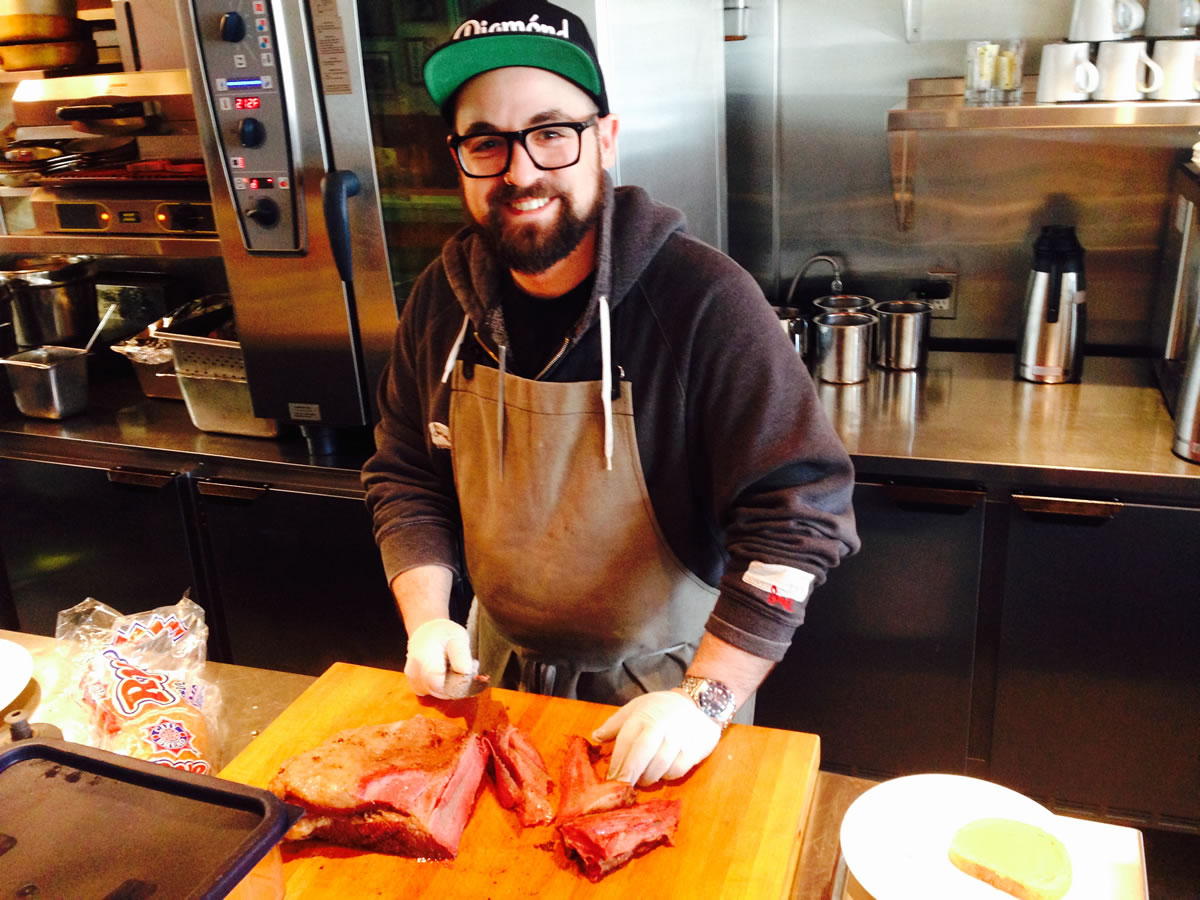 Anyone who has anything at Sherbrook Street Delicatessen -- particularly the smoked meat, pickled tongue, chopped liver, beef salami, and ... okay just about everything on the menu -- knows that chef Jon Hochman likes his meats.

Sherbrook St. Deli opened in March of last year and has since become a neighbourhood, industry and tourist favourite, with diners loving Jon's slow crafted, kosher-style comfort food -- the roots of which can be traced back to Oasis Deli, which operated on Main Street from the 1930s-1970s and was owned by Jon's cousins Ben and Sam Hochman.

This rebirth of the deli has become a North American food trend, and this past week Western Living named Jon as a western Canada Foodie of the Year finalist,* with WL's food and travel editor Neal McLennan citing his, "old-school/new-school Jewish deli in Winnipeg, which is everything that is good about an old Jewish deli, and everything that's great about a new restaurant." (*Lisa Dyck and William Dyck of Cornell Creme ice cream -- which is the best! -- are also representing Winnipeg on the list.) 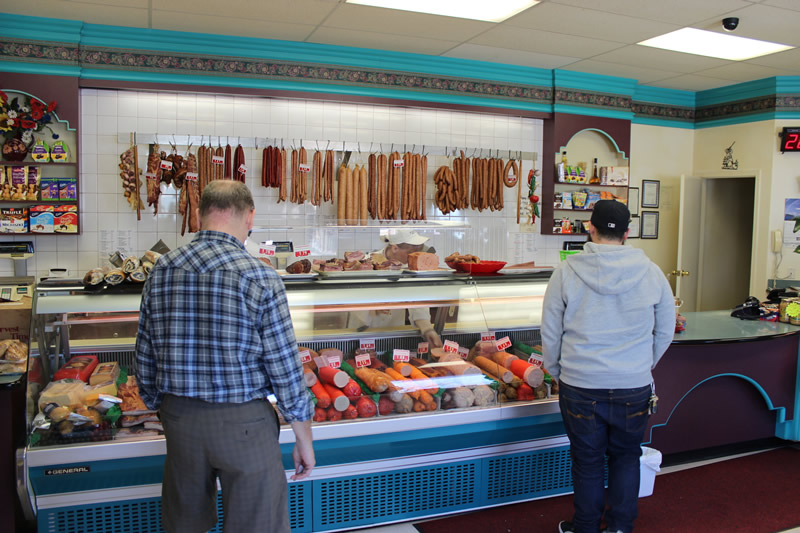 Anyway, a few weeks back Jon and I headed out for a meat-centric morning tour to a few places he likes to hit up on his days off.

It started at Karpaty Meats & Deli, a Polish meat shop where only pork is used. We opted for coarse garlic sausage ($6.49), cottage roll ham, jellied tongue (my choice) and four smokies.

It was over this spread, which we ate picnic style on the hood of Jon's car, that he shared these gems (which have been edited for length):

"The first time I heard about Karpaty I was working at Tavern at the Park, and the sous chef at the time, a gentleman by the name of Nestor Galarnyk... decided to switch the charcuterie one day from the classic Italian meats that you'd find on a regular charcuterie platter. So he brought in Karpaty's coarse ground garlic coil.... and I just remember working the brunch service that day, and trying it throughout the service and loving it so much. So Nestor gave me a coil to take home and from there the obsession began.

And just look at this meat: This stuff was cut this morning... and because it is meant to be preserved it obviously contains a lot of sodium, but I don't find it overly salty. [It was at this point that a customer, who was leaving the shop, came up to our car hood picnic to say we've come to the right place for garlic sausage.] 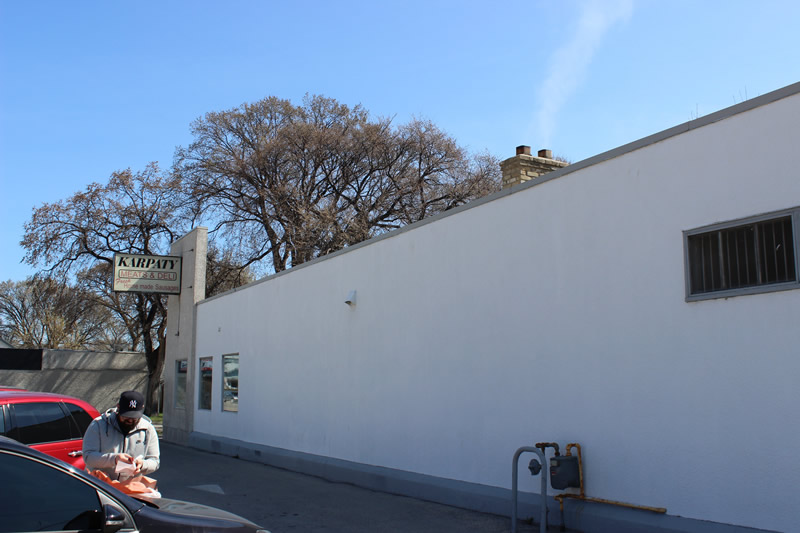 ... Anyways, ever since I was introduced to this place, I've always wanted to work here, but I was way too intimidated to even apply for a job here.... but two years ago I met a fellow at a car dealership who is friends with the owner. This gentleman was also Polish -- so they had that in common -- and basically he was confident he could get me a position, or at least my foot in the door.

And sure enough, it didn't happen, because I wasn't part of the family. This place is family owned and operated -- you go in here and it is always the same faces, so you've got to like that."

From there it was on to Double Greeting Chinese Snack House (355 McDermot Avenue) where Jon introduced me to his favourite shrimp dumpling in Winnipeg while our server made sure we ordered what is possibly the best brisket soup in the city. 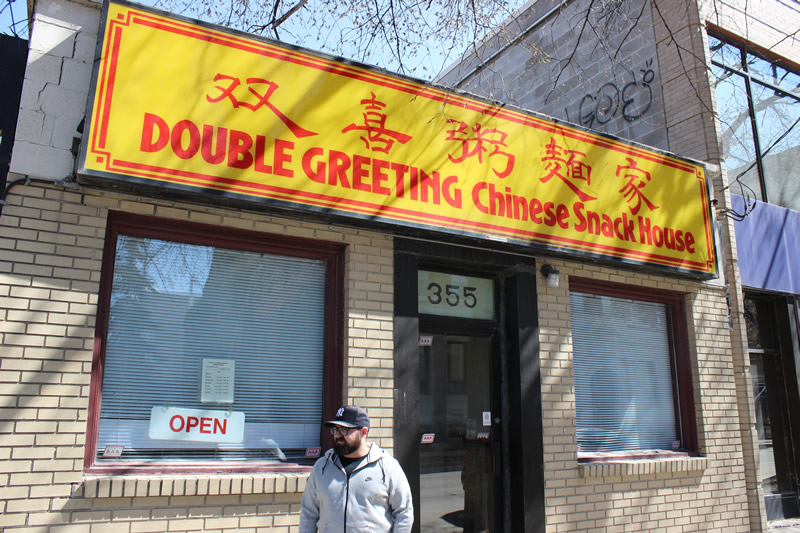 The whole idea is I don't have to blow my mind at the complex flavours of Szechuan peppercorns -- instead this is just comforting. Because ultimately, that's my goal with making food for people.

And this is what does it for me: here's a simple wanton soup with a really awesome shrimp dumpling. Even this beef brisket soup -- this is the first time I'm having it, and the taste of this broth, you get that collagen and layers of flavour blended into it. It's so good. 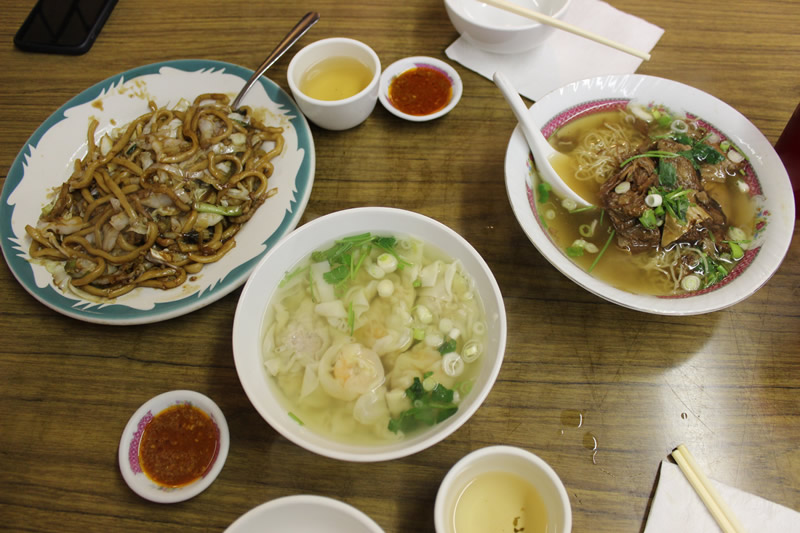 I will add here that the shrimp dumpling in superior soup was rich and buttery, while Jon and I went crazy for the beef brisket noodle soup, which was aromatic and luscious and just what you'd be looking for when you have a throat cold with their chili oil. Jon texted the next day at 11 a.m. to say he was going back for lunch for that brisket soup alone -- and this is a man who cooks and cuts brisket all day.

Finally, there was one spot we didn't make it to, but which I must share Jon's love for, which is Golden Loong.

"My brother first took me to Golden Loong on my birthday, I didn't want anything overly fancy and we wanted to try something new, and I've always been attracted to places like this.

We had a huge selection of dishes, from hand-pulled noodles with pork and chili oil, to iron wok skillet chicken that has big chunks of fried potato and these really odd -- but delicious -- fried sticks that almost look like french fries but actually turned out to be fried baguette. And it was covered in tons of scallion and chilies -- they use this classic chili oil that is proprietary, like you try it and you know it is that restaurant. Which could be that it is northern region, Xi'an cuisine, and the flavour of this chili oil is second to none -- it's so intoxicating.

It was so good that I went back to the restaurant for the next seven days in a row because I wanted to try everything. Their hand-pulled noodles; amazing, they've got these noodles with cumin lamb, where the lamb is shredded, it's so good.

Golden Loong is located at 2237 Pembina Highway and is open Monday to Saturday, noon to 10 p.m., Sundays noon to 9 p.m.