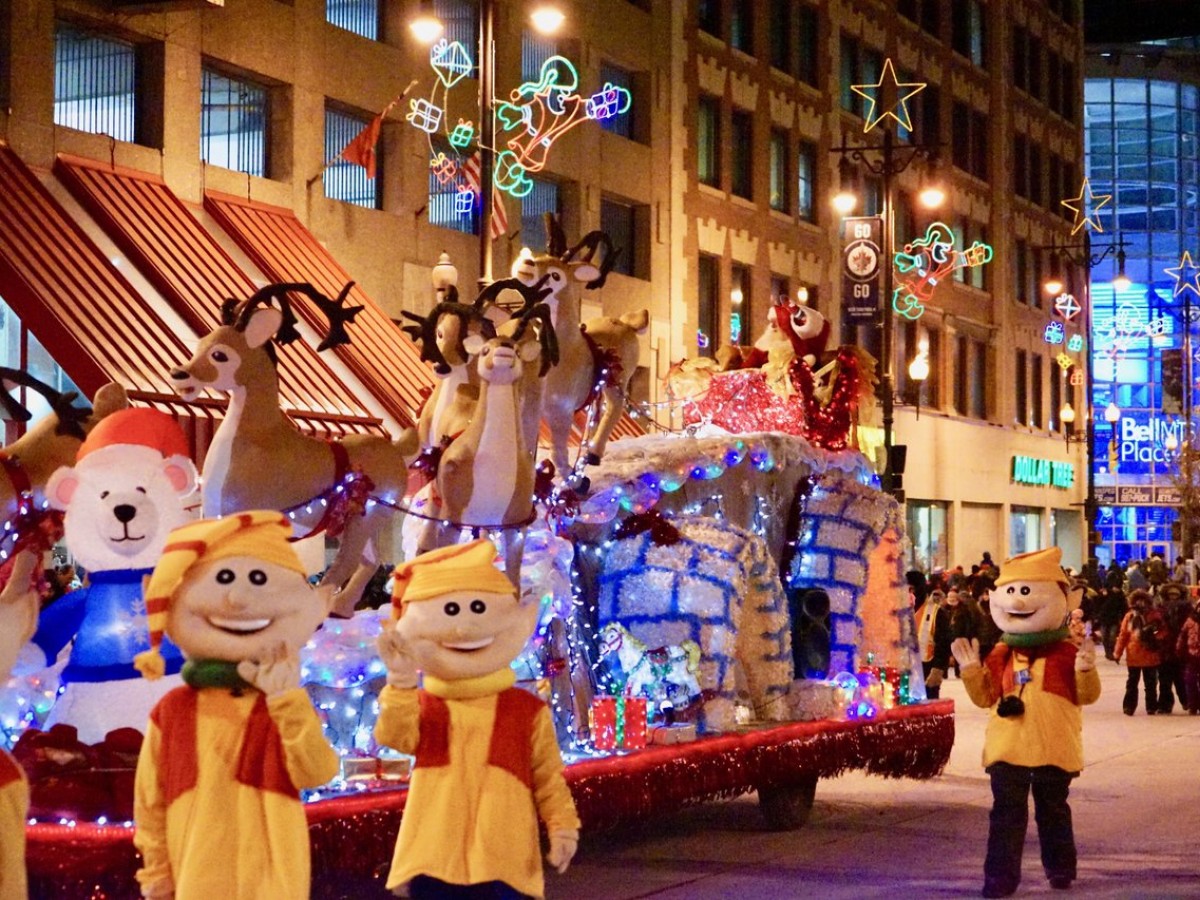 Santa's float, which has now been revamped, from last year's parade (Tourism Winnipeg)

The fact that the 109th Santa Claus Parade is a go is already a bit of a Christmas miracle.

The parade, which will take place downtown on Saturday, November 17, was in jeopardy of not even happening this year after the main float – the one which will carry the big man himself – was deemed unsafe for another year.

Thankfully, Winnipeg being such an awesome city full of generous people and companies, Santa* will have a shiny, new, safe sleigh.

After a crowdfunding campaign to raise $100,000 was started, donations poured in, with more than $160,000 ending up being raised – the surplus of which will be used for float maintenance and storage, along with starting a float bursary program for community organizations and non-profits – ensuring the parade will continue to years to come. (And on that note, a big shout out to everyone who chipped in from small individual donations of $5, to SkipTheDishes, who dished out a whopping $40,000 to keep the parade going.)

The Santa Claus Parade is Canada’s second largest parade – which is also the largest night-time parade in the country, drawing more than 60,000 to line up alongside Portage Avenue, with an additional 3,000 Manitobans taking part in some capacity in the parade.

Now the only thing better than a root beer float (or perhaps a bourbon float, for you parents out there reading this), are the floats in the Santa Claus Parade.

With nearly 80 floats and entries, you and your little ones are in for one spectacular non-stop light show.

There’ll be floats from fan favourites like the Winnipeg Blue Bombers and the Winnipeg Goldeyes – with Buzz and Boomer, and Goldie and Goldette whooping it up; Manitoba Hydro’s near-legendary light shows on their three floats, including a Cinderalla-themed one; along with numerous Winnipeg cultural institutions like Festival du Voyageur, Pride Winnipeg, the Winnipeg Symphony Orchestra and Parks Canada.

This year’s Grand Marshals are the Winnipeg Jets Wives, Girlfriends and Families.

If you already thought that the Santa Claus Parade was like P Diddy – in that “it can’t stop, won’t stop” you should probably also note that the party starts way before the parade. And by party, we mean block parties, which of course are also P Diddy approved.

Starting at 4 p.m., there will be several block parties along the parade route on Portage Avenue.

They include the Sport Manitoba Block Party (Garry to Fort) – featuring plenty of sporty stuff that will keep the kids moving, like tree bowling, a reindeer ring toss and other winter games, and the Energy 106 + Hot 100.5 + CKJS 810 Block Party – which will be bringing together three of life’s greatest things, that being pizza, hot chocolate and a dance party with DJ D-Lo spinning.

Plus, there will be a Santa’s Workshop at Cityplace (2 p.m. to 4 p.m.) – which will include free photos with Santa before he takes to his float, and a Holiday Concert with Camerata Nova – the celebrated vocal group – in the Manitoba Hydro Building Atrium from 2:30 to 3:30 p.m.

The 109th Winnipeg Santa Claus Parade will run along Portage Avenue, starting at Young Street and ending after a south turn on Main Street at Graham Avenue. As mentioned, the block parties start at 4 p.m., with the parade proper starting at 5 p.m., so get downtown early to ensure you get a good view.

*Much love and respect to Brian Sanderson and his family. Sanderson played Santa in past parades and had storied career playing Old St. Nick in films, television and at Winnipeg malls for over two decades. He passed away on October 31.