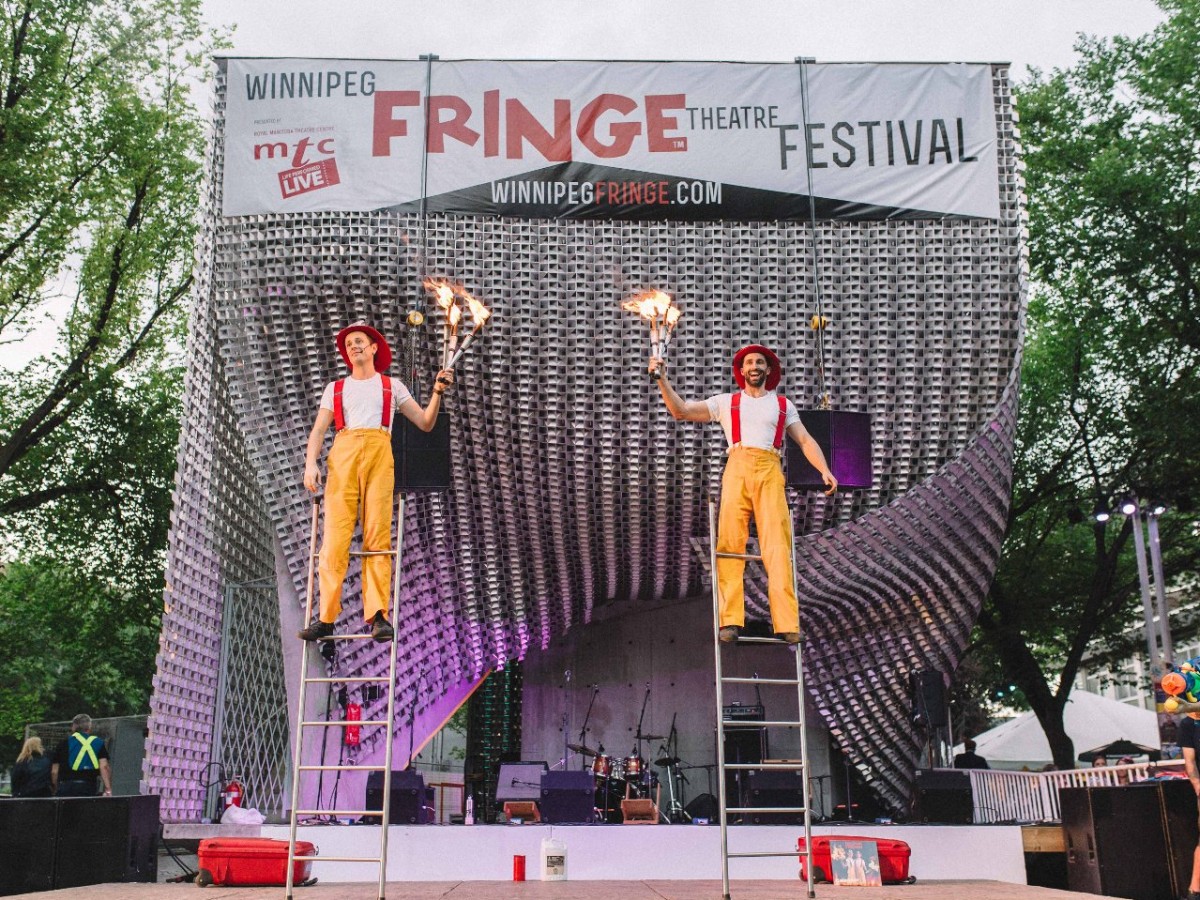 You never know what you'll see at the Fringe (Mike Peters)

From comedy to physical theatre to improv, there's a show out there for you

The Winnipeg Fringe Festival is hands-down one of the best things about Winnipeg in the summer. It takes place over ten glorious days every July where you only need to exist on food truck curry, mini donuts, and the magic of affordable theatre.

This year’s Fringe, which runs from July 18-29, has a theme of ‘Take a Chance’ – and with all the great shows that will be taking over the Exchange District and beyond, there are a lot of chances you can take. Whether you’re a Fringe veteran or new to the indie theatre scene, there's a show you’re guaranteed to enjoy.

The regular problem for Fringers is that there simply isn’t enough time to get to all the plays we want to see. There are over 175 different shows, making it pretty much impossible to go to everything – but there are always a few that have us extra-excited.

In reality there are dozens of shows we really want to see, but we've whittled it down to a top 11 for this post. So, let’s dive in to what our top Fringe picks are for 2018:

This show premiered on the Fringe circuit by veterans Cory Thibert and Linnea Gwiazda, and has been cleaning up like crazy. So far, it has won Spirit of the Fringe of the Tilee Awards (London Fringe Festival) and second place in the Vancouver Story Slam Championships. You may have seen Cory in Happiness™, which was one of the Fringe hits in 2015 and 2016. See this if you’re looking for a dynamite one-person storytelling show.

Call Girls, by Not My Favourite Daughter Productions

Not My Favourite Daughter is a theatre/film company to watch. These women are recent graduates of the University of Winnipeg Honour’s Theatre program, and are already producing their own work. If you’d like a taste of what they do, check out The Mimosa Girls on Vimeo. Call Girls follows three women who work for an adult chat line and learn how to be true to themselves. See this if you’re looking for something to bring your best girlfriends to.


The DND Improv show is a staple of the Winnipeg Fringe. We can almost guarantee advanced tickets are sold out, and rightfully so – you won’t find a more dedicated group of fans anywhere. The cast is Winnipeg’s best in comedy and improvisation, and riff off Dungeons & Dragons like nothing else you've ever seen. If you’re going to try to get in, show up at least an hour early. See this if you’re looking for some nerdy, improvised fun.

The Elephant Song, by Nicolas Billon

Nicolas Billon is definitely a punch-in-the-gut type of playwright. The Elephant Song is about a psychiatrist who has suddenly vanished from his office. The last person to see him is Michael, a patient who is obsessed with elephants and speaks cryptically of opera, foul play, and murder. This production is produced by We’ll Do It Live Theatre, who last brought you the 5-star, sold-out production of Behanding in Spokane. See this if you’re looking for a meaty drama.


Hot Thespian Action is arguably the best sketch comedy group in Winnipeg. They’re three-time Canadian Comedy Award champions, and show no signs of slowing. This year, they’re performing all the fan-favourite sketches from the troupe’s ten hilarious years at the Fringe. If you’re going to see this, you should try to get advance tickets or line up early for the show. See this if you’re looking to cry-laugh.

How my Light is Spent, by Alan Harris

This comedy stars Winnipeg stage veteran Andrea del Campo and directed by Steven Schipper, past artistic director of the Royal Manitoba Theatre Centre. It’s about Jimmy, a 34-year-old man who works in a donut shop and lives with his mother, and Kitty, an adult chatline operator. When Jimmy loses his job, he starts disappearing bit by bit, and it’s up to this duo to turn each others’ lives less upside down. See this if you’re looking for a star-studded cast in a zany show that’s sure not to disappoint.

James and Jamesy are a loveable British tea-drinking duo who have won Best of Fest 20 times in their careers. They put on shows everyone would love. If you brought your grandma, child, spouse, and friend to see their show, there would be something for everyone to laugh along to. See this if you have a large crowd to please.

This play was in the 2017 Fringe, and was on my to-see list then but we missed out. Not this year. After receiving positive reviews last summer in Winnipeg, The Merkin Sisters toured across Canada including stops in Montreal, Toronto, and Edmonton – earning more positive press along the way. Now that they’re back, this comedy (which the performers themselves don’t even know how to describe, apparently) is sure to delight people looking for some off-beat humour. See this if you want some adult-humour hilarity.

Sound & Fury, a Fringe institution that is infamous on the worldwide circuit for throwing old stories into a blender with some slapstick comedy and silliness, will put their spin on the classic French play Cyrano de Bergerac. This troupe always gets great reviews when it passes through town, and is a safe bet for another strong performance this year. See this if you like goofy jokes, and putting a contemporary (and irreverent) spin on old classics.

Fans of physical theatre may have heard of Bossy Flyer, the production company behind Off-Broadway hit Flight. This new production promises the same high-intensity physical comedy. Focusing on two female roommates, you’ll follow their relationship as it evolves over the course of their lease. See this if you’ve ever had a roommate, or like acrobatics.

This is a blind pick, but we’re huge ‘Three Dead Trolls in a Baggie’ fans and they have co-writer credit, so we’re sold. You may not want to expect an accurate history lesson during this show, but the performance promises some Canadiana humour you probably won’t get anywhere else. Plus, Mike Delamont (who is all but Fringe royalty) has produced this play, which is always a good bet. See this if you like history, politics, or historically inaccurate catchy tunes.

There are so many great Fringe plays to see this year – we know we’ve missed some, and we’ll keep our ears to the ground for 2018’s Best of Fests. Don't forget to pick up your Frequent Fringer pass and take in as many shows as you can - we love to support local theatre, and know you do too! In the meantime, we’ll see you at Fringe headquarters in the Exchange District this summer.