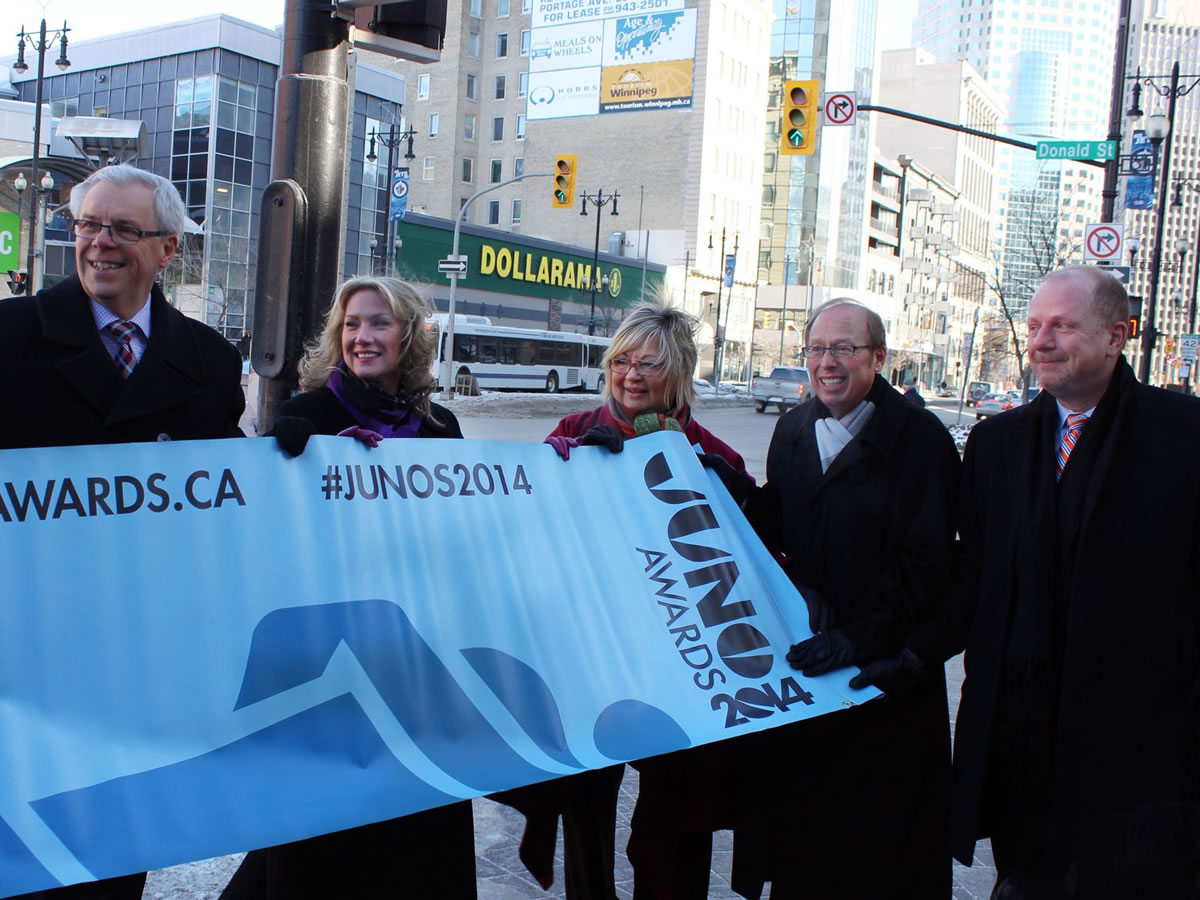 Yesterday, Portage Avenue began to get a whole new look in preparation for the JUNO Awards coming next month! Greg Selinger (Premier of Manitoba), Sam Katz (Mayor of Winnipeg), Melanie Berry (President and CEO of the Canadian Academy of Recording Arts and Sciences [CARAS], the JUNO Awards and MusiCounts), Carole Vivier and Kenny Boyce (2014 JUNO Host Committee Co-Chairs) braved the cold to raise the first of a series of official JUNO Award banners that will appear around the city!

Once we were all back inside (at the beautiful downtown Metropolitan Entertainment Centre), the Winnipeg JUNO Host Committee, emceed by the one and only Ace Burpee, unveiled an exciting variety of events that will be taking over the city leading up to and during JUNO Week, when all the 'Peg will be a party (March 24 to 30).

"This March, we are inviting all Manitobans to take part in the JUNO celebration," said co-chairs Carole Vivier and Kenny Boyce. "There are some great ticketed events as well as free public events and performances taking place all around Winnipeg. The Host Committee is partnering with SiriusXM Canada to host a JUNO kick-off party right here at Manitoba House"—the name for the Met during the festivities—"featuring performances by The Trews, The New Meanies, and Attica Riots." Tickets for the event are $20 at Ticketmaster and are available now. 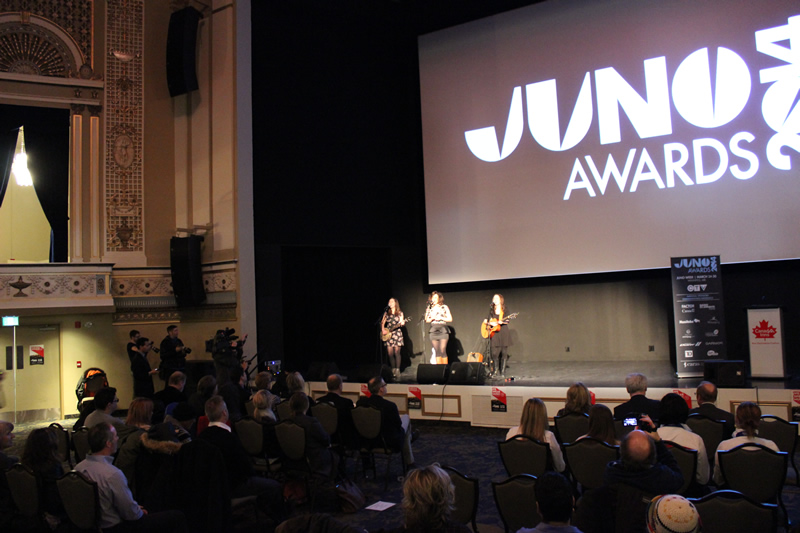 "We've planned free public events that include performances at The Forks and the airport, as well as Random Acts of JUNO that will be springing up around downtown until the end of March," said Vivier.

More exciting announcements were made, including that eight-time JUNO winner Sarah McLachlan will take the stage as a special presenter for MusiCounts, Canada's music education charity associated with CARAS. She will be speaking about the work the charity is doing this year to help keep music alive for Canadian youth, and putting instruments into the hands of children who need it most.

Hometown hero Team Canada skip Jennifer Jones and her team were in attendance, and hot off the heels of their incredible olympic achievement, were also confirmed as presenters at the JUNO Awards. Last week, the Winnipeg (St. Vital-based) team took home the gold medal for Women's Curling, and were greeted by hundreds of Winnipeggers at the airport on Monday night. 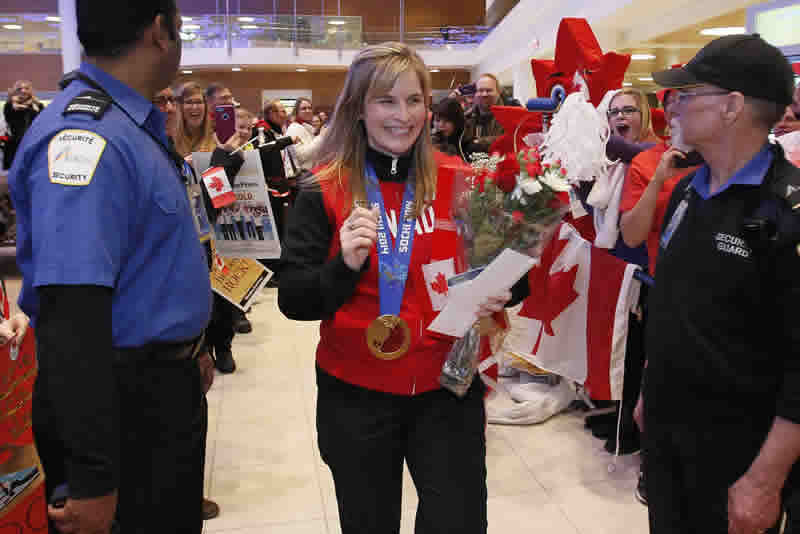 Brett Kissel, Dean Brody and Gord Bamford have been added to the performance lineup for CTV's broadcast of the awards on Sunday, March 30. These additional artists join previously announced performers Matt Mays, Robin Thicke, Serena Ryder, The Sheepdogs, Tegan and Sarah, and Walk Off The Earth.

This year, EVERYONE has the chance to be part of the 2014 JUNO Awards by paying tribute to Canadian Music Hall of Fame inductees Bachman-Turner Overdrive. From now until March 3 (get your mics ready this weekend!), fans can upload their best cover version of the classic BTO hit "Takin' Care of Business" at the JUNO Tribute Nation website. A selection of clips will be compiled to create a spectacular video to be unveiled at the Awards! It was also announced that Randy Bachman will host the JUNO Songwriters' Circle (March 30) at the Burton Cummings Theatre; an intimate performance showcase featuring some of our most talented singer-songwriters. Tickets for this as well as the Awards themselves are available at Ticketmaster.

The always-popular JUNO Cup will kick off the awards weekend on March 28 with a celebrity fundraising hockey game in support of MusiCounts. Numerous hockey-loving Canadian rockers, including many JUNO nominees, will face NHL greats in a fun, competitive game at the MTS Iceplex. Tickets ($20) are also now available at Ticketmaster. The next day, head over to St. Vital Centre from noon to 3:00 p.m. for the JUNO Fan Fare, where you can meet and greet nominees. The event is free, but wristbands will be required for autographs.

This is but a small sampling of the many events taking place in the city in the lead-up to the JUNO Awards on March 30, with more acts being announced in the weeks to come. We are so proud to be hosting this amazing celebration of music, and encourage everyone to join the festivities in one way or another. Stay tuned and get ready to celebrate our incredible range of talent over the next few weeks; the countdown is on!