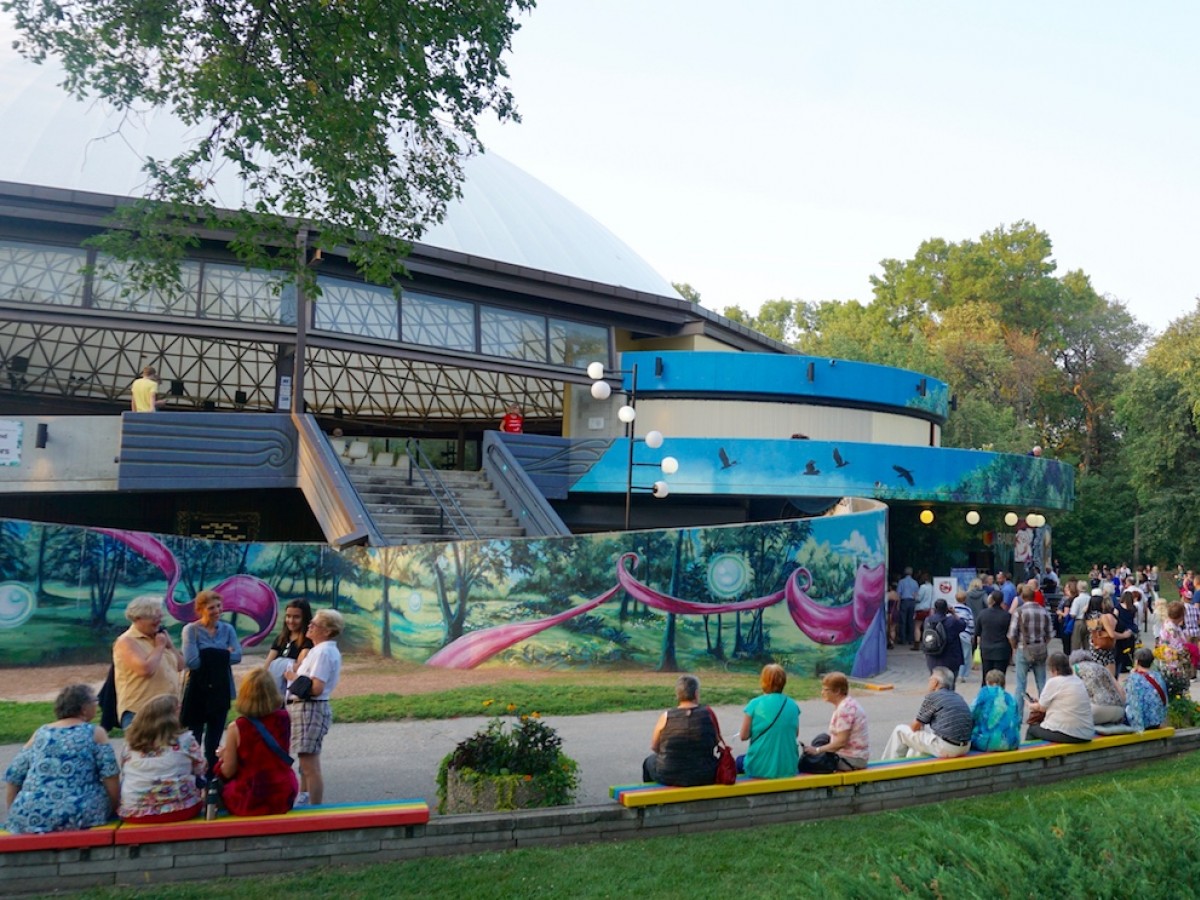 Mamma Mia! is on now at Rainbow Stage until August 31

​Bring your Mama to Mamma Mia! at Rainbow Stage

Only a handful of performances have lit up the summer stage so far, but if the number of audience members jumping out of their seats and into a full-on ABBA sing-along is any indication, Mamma Mia! at Rainbow Stage is already a hit.

The musical, originally written by playwright Catherine Johnson, is directed by Ann Hodges (who previously directed Rainbow Stage’s Mary Poppins in 2013 and The Little Mermaid in 2014) and is running now until August 31 at the outdoor theatre in Kildonan Park.

When Tourism Winnipeg caught the show on Monday evening as part of a backstage Instagram tour of the theatre (check out the hashtag #rbsmammamia for photos, and follow us on IG for details on joining us for the next one!), almost every seat in the open-air dome was filled. The crowd was wonderfully diverse, but after only a few scenes into the show, it was obvious that the people having the MOST FUN EVER (and I mean EVER—clapping, laughing, and singing every single word to "Honey, Honey") were—well, the moms.

My own mother—who is likely reading this right now (Hi, Tracey!), was one of the many moms movin’ and groovin’ during the show. Besides the stellar Swedish-pop soundtrack, there are a few other elements that make Mamma Mia! a musical must-see for you and your mama:

Opening night has arrived! It's been a busy few weeks but I have tried to savour every moment. I grew up on ABBA and I've wanted to be in Mamma Mia since I saw it back in 2004. To the cast - I'm in awe of you all and I'm honoured to share the stage with you. You're fearless and your collective experience inspires me to no end. To the team, thank you for this amazing opportunity. You have given new life to this story and to these songs. What a crew! Can't wait to share this with everyone. I know it's gonna mean so much tonight. #rbsmammamia

Mamma Mia! takes place over a 24-hour period on a tiny Greek island and the set, designed by Brian Perchaluk, adds an important visual element to the story.

A sparkling blue ocean stretches behind Donna’s Cyclades-style hotel, and a blooming row of pink flowers tumble down the side of the building. The small handful of set changes throughout the play do not differ drastically, but instead work to fill the stage with calming colours and give it a beautiful Mediterranean feel.

This is Michele. This is her playing Greek besties in Mamma Mia at Rainbow Stage. Look how much sassy surprised face she is giving. She usually gives that amount of face in real life too. Tonight is opening of Mamma Mia, so if you're in Winnipeg please see her and her sass in person. Cannot wait to see it myself in two weeks, so excited and proud, Happy Opening @mzshuster!!! #MammaMia #HoneyHoney #DotDotDot #OpeningNight #ABBA

Whether it’s Sophie with her bridesmaids or Donna with her backup singers, some of the strongest scenes in this show are solely female.

In one scene, Donna (played by Ma-Anne Dionisio) and her former bandmates perform an over-the-top rendition of "Dancing Queen" that had a group of women next to me nudging each other in a silent understanding of, “we’ve definitely done that before”.

In another, Sophie (played by Olivia Sinclair-Brisbane) reads aloud her mom’s old diary to her bridesmaids and they giggle over the meaning of the “dot dot dots” that suspiciously seem to end off every evening with her suitors.

If you want a closer look at my moustache you'll have to come see Mamma Mia! The show runs until August 31st, hope to see you there. @rainbowstage

The two-hour performance is peppered with jokes your mom will love—like when Rosie (played by Denise Oucharek) holds up a particularly small dress from twenty years ago and jokes that she could still wear it now—as an eye patch. Then, the entire audience was lost in laughter again during Rosie’s awkward attempt at seducing eternal bachelor Bill (played by Arne MacPherson) with "Take a Chance on Me". The jokes are frequent, funny, and family-friendly (any sexual innuendos are subtle enough to go over a youngster's head).