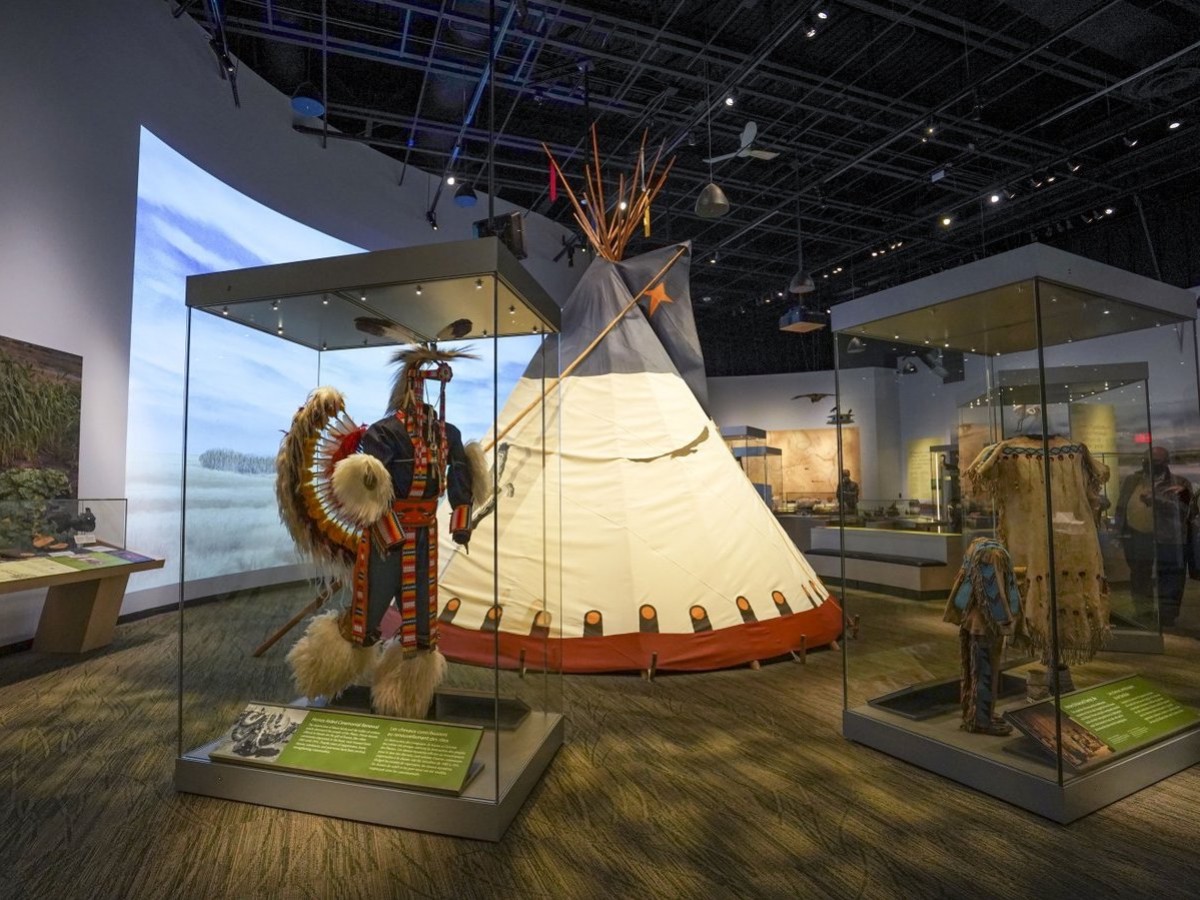 Everywhere your eyes go in the Manitoba Museum’s newly redone Prairies Gallery, they’ll be met with something wondrous from our region’s past and present.

Turkey vultures and raptors soar overhead. Adolescent ground squirrels burrow below displays while their parents fend off a badger. You can enter places like an impressive Sioux Valley Dakota Nation tipi. You can see the cross section of an exposed riverbank that is studded with real bison bones that are over 1,100 years old, while beside it you’ll find First Nation’s pottery that dates back centuries.

As you explore, your ears will be met with sounds of the prairies – from chirping birds to insects, to audio recordings within the tipi – creating an immersive experience in this expansive gallery that reflects the land that surrounds the city.

“As you come in, we really wanted to give this impression of wide-open spaces,” said Kevin Brownlee, the Curator of Archeology at the Manitoba Museum.

“Many people who come to Manitoba are not necessarily going to see all the different parts of the prairie that we see… you don’t always get to see the diversity of Manitoba’s prairie – these vast sweeping valleys and hills – it’s a really quite beautiful place. So we are hoping this Prairies Gallery is going to be this opportunity to be this passport to this area, to explore more of what Manitoba is,” continued Brownlee during the unveiling of the exhibit.

The curatorial and design team have done an incredible job taking in sight-lines for both the old and young, the tall and the small, ensuring every visitor has something to catch their eye.

“We wanted to include things that would engage children in the gallery; to have things at their eye level that they’d be really excited about so that their parents could actually have time to look at things that they found interesting,” said Dr. Diana Bizecki Robson, Curator of Botany.

The circular exhibit covers natural history – with numerous insects, fungi and plant species, along with cultural anthropology – with a much greater focus on Indigenous culture, covering the devastation brought on by settlers and later the residential school system, along with pre-contact ingenuity in fields like agriculture and garment making and how the introduction of horses in the 18th century changed the scope of the bison hunt.

One of our favourite new features is a large original map of the region unlike anything you’ve seen before titled “Prairies Before the Plow.” It depicts how virtually untouched Manitoba was in 1850, detailing the wetlands and open grasslands before they were transformed by roads and towns.

Another is the striking, colourful large mural Rhythmic Movement in the Grasslands by Dee Barsy, an artist from the Skownan First Nation.

Of course, there are also plenty of fabulous little dioramas that will transport visitors to little worlds that depict what it was like where the Red and Assiniboine Rivers met in centuries past.

Don’t forget about the other galleries too!

Due to COVID-19 restrictions, the only spaces not currently open to the public in the Manitoba Museum are the Planetarium and Science Gallery, the latter of which contains numerous interactive, hands-on elements.

That said, there’s still so much to explore in the museum, which has been updated throughout with new corridors that connect the galleries and an all round spruced-up feel.

We’ll always like to direct visitors to the Earth History Gallery, which contains archeological marvels like a 90+ million-year-old juvenile pliosaur fossil that is incredibly still well-intact. These massive aquatic lizards dominated the prehistoric seaway of the Cretaceous period that once covered the prairies 100 million years ago. Above it, you’ll see a huge replica of the species – something you’d never want to encounter in real life while swimming – along with a replica of a mosasaur, another giant aquatic lizard that was recently made famous in the Jurassic world films.

The Gallery then jumps forward millions of years, with several impressive species of massive mammals from the last ice age that are now extinct, including a replica of the giant ground sloth (Megatherium) that stands around 20 feet tall and is often mistaken for a dinosaur by visitors.

Kids and adults alike will always be enthralled by the Nonsuch Gallery too. New upgrades from 2018 include a soundtrack that takes you back in time to a circa 1650s to a port on the River Thames, while new lighting runs from day to night, clear skies to stormy, in a constant cycle. The Nonsuch itself, is a famed replica circa 17th century ketch, which actually crossed the Atlantic to be brought to Winnipeg from England in 1974. It still has that smell of wood and ropes and timelessness, that you can’t help but relish.

The Manitoba Museum is open Thursday to Sunday, from 11 a.m. to 5 p.m., with the new Prairie Gallery now open to the public.