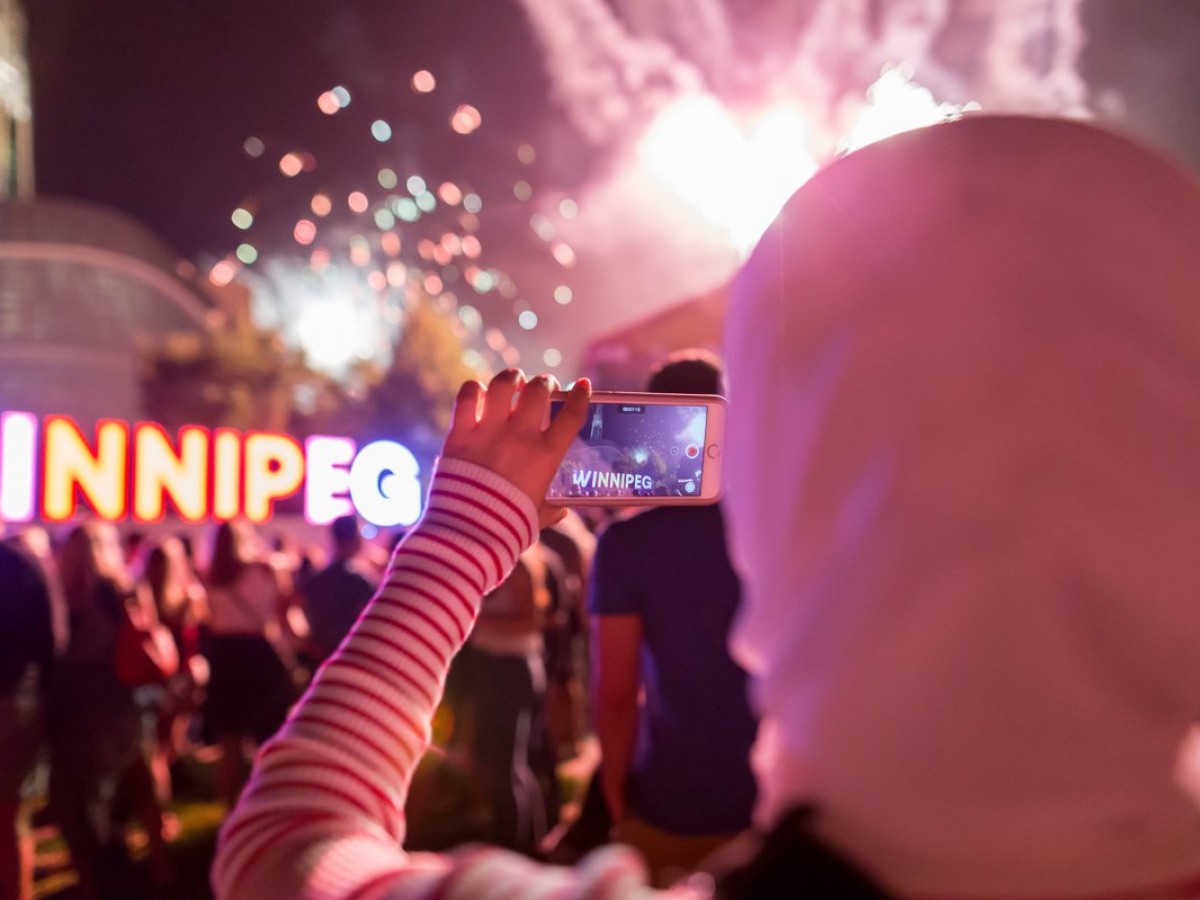 While you won't find crowds like this this year, you can still experience Canada Day on your phone like this person on July 1 (photo by Mike Peters)

As our headline ode to U2’s Achtung Baby* indicates, this year Canada Day in Winnipeg is going virtual.

Yes, not being elbow-to-elbow with people at The Forks and along the Tache Promenade to watch the fireworks may not seem as communal and enchanting – but we assure you it’s best to keep doing our social distancing part for the sake of public health. Plus, there’s still a dynamic duo coming at you online that will ensure you can still wave that maple leaf while your heart remains aglow.

Every year The Forks is the best place to experience Canada Day in Winnipeg. It is home to the fireworks along with usually two-stages featuring non-stop great live music and entertainment. This year, while they are ensuring the crowds are kept to a socially distanced level (you can still go for food and drinks at The Common’s huge outdoor patio, which is always so charming with its river setting, trees for shade, and comfortable furniture) by bringing the big show online – and what a show it will be!

The format will be a one-hour star-studded variety show, featuring performances by Taylor Janzen and a cellist from the Winnipeg Symphony Orchestra (for more on Janzen, be sure to check out her song “Dennis Quaid” which gets some serious CBC Radio 2 airplay because it slaps so hard) and Faouzia (#OurQueen – her latest single “Secrets” already has over 800 thousand YouTube views and it just came out at the end of May!) who will be performing alongside a secret fireworks display from Archangel Fireworks.

The event is a partnership of The Forks and Canada Life and you can view it here starting Wednesday at 2 p.m.  Here's where you can watch.

Right across the Red River from The Forks – which sure, doesn’t matter virtually, but all the same – Winnipeg’s French Quarter is also presenting an online Canada Day experience that will be zestier than a meyer lemon and a key lime on a dance floor accompanied by a fiddle.  And why so zesty? Because it will be hosted by the one and only Barney Morin, whose wit is as lengthy as his beard.

During “Saint-Boniface Celebrates Canada Day” Morin will be your private guide to this gorgeous area of the city. He’ll bring you to notable spots like Saint-Boniface Museum – which has a fantastic array of artifacts showcasing the history of the Grey Nuns and the area in general, Maison Gabrielle-Roy – where the celebrated author was raised, and Fort Gibraltar – the home of Festival du Voyageur, which is a replica of a Northwest Company trading fort.

Morin will also be making stops at some of St. B’s finest shops while musical performances will come courtesy of Andrina Turenne, Justin Lacroix, Madame Diva and Hakim Moussaoui.

It will serve as a great introduction to the culture, history and flair of one of Canada’s most-charming neighbourhoods.

While the Assiniboine Park won't be hosting an official Canada Day celebration this year, you can still carry on with your traditions by visiting the park and zoo in person, or virtually by checking out one of their many Creature Features.

The Assiniboine Park Zoo will be open regular hours on July 1, perfect for celebrating this special day with some of Canada's most beloved animals.

*Yes, we know U2 is an Irish band, so not particularly fitting, while yes, they really have diminished in credibility over these years, but that album, and all the ones that came before it are still classics in TW’s books.