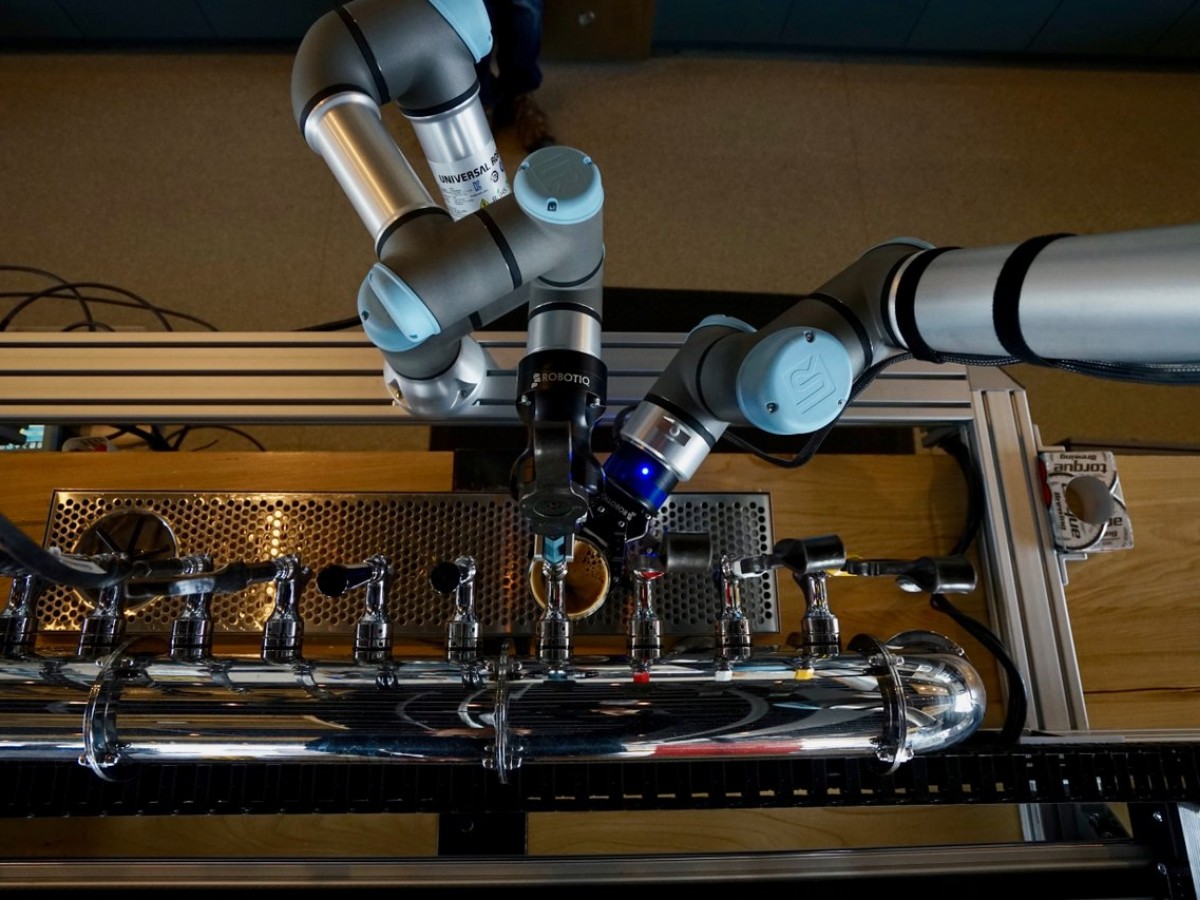 Torque Brewing and Eascan Automation bring you "Beer and Bots"

Robots will be slinging beer on Friday, February 22 at Torque

While no two bartenders are built the same, we can assure you that none are built like Vendor and Servo.

You can find this tandem team of robotic arms slinging award-winning pints on Friday, February 22 at Torque Brewing for Beer and Bots, with Servo running the rail taking orders and serving, and Vendor pouring that perfect pint.

“They only take a minute and a half for a pour, and we’ve all waited longer than that at bars,” said John Heim, the president and one of the five co-owners of Torque Brewing.

“Plus [human] bartenders can often be looking at other people and ignore you. So instead of waving up and down and jumping it’s nice to know that the robot is nondiscriminatory, so everyone is treated equal,” Heim jokes.

The reason that Torque currently has two robots bartending is due to another one of their owners, Phil Bernardin, a mechanical engineer, also owns Eascan Automation, a custom machine building company here in Winnipeg that has been operating since 1992, with Bernardin joining in 2001.

“Engineering and beer go hand-in-hand, don’t they?” said Bernardin. “I’ve been in automation engineering for 18 years now and I was approached by another guy who worked in the brewing industry and we [Eascan] supported their production equipment. After that a couple of these guys [who were founding Torque] approached me and asked me to start a brewery together…. And I said absolutely.”

Along with Heim and Bernardin, Torque’s other owners are Adam Olson, Matt Wolf, and Gilles Pinette.

The brewery began canning its first beer in August 2016. To date in their large taproom you can find up to 13 beers on tap, while the brewery itself has won approximately 20 brewing awards, a few of which you can see in their impressive trophy case.

One award that is missing is, which surely they would take, is “smoothest non-human pour,” as Vendor and Servo really do a fine job working the bar. (And yes, the guys came up with the idea over beers.)

To order, all you do is stand at a station along the bar and choose your beer by pressing Servo’s “wrist” in a certain direction. A push from the left will get you a Red Line IPA, a push downward is for the Diesel Fitter Stout, from the bottom is The Witty Belgian Wheat Beer, and from the right side is the What the Helles Lager; all four of these beers are from Torque’s Core Pours line, which also includes their Torque Blonde. After that, Servo will pick up an empty glass, give it a rinse, and place it under the tap so Vendor can pull the tap and fill the glass. Servo will then glide down the bar and place your pint oh-so-gently on your coaster. It’s also, unlike many of the bartenders I’ve worked with in my 20s, very quiet.

To set this whole thing up has been over a month of work (off and on) in collaboration between Eascan, Torque, Skeans Pneumatics and Automation, and item Central Inc. – this includes the programming, the building of rails, measuring and calibrating, and whatnot.

While we immediately thought of Season Two of Westworld and that terrifying BigDog by Boston Dynamics, the Torque crew doesn’t estimate any real bartenders will be sweating about losing their place just yet.

“It’s certainly a fun thing to see a robot pour your beer, but it also makes you realize just how far away the technology is from replicating human behaviour,” said Heim. “There was a significant amount of people involved just to get this to pour beer.”

On hand for the assembly and programming of Vendor and Servo from the Eascan was Zane Karpoff – who gave us a lot of the robots’ specs, and Caleb Dueck, a University of Waterloo co-op student from Winnipeg who helped assemble the panel (the robots’ brains) and the robot assembly.

As to other tech specs: Servo, which is a six-axis robot – meaning it has a wide range of motion along x,y, and z, planes, weighs about 75 lbs., while Vendor is just 25 lbs.

For the Eascan team to develop something like this in your home or office (the set-up, the programming, the robot, the electrical design and the installation), you’d be looking at around $100,000 – so if anyone out there is looking to throw the most unique social ever, surely Eascan can build an arm for you that can pour that shot or uncap that bottle.

“But that nice thing about this is usually you are supporting an employee, which allows another employee to go do another function,” said Bernardin. “Instead of doing mundane, repetitive tasks they can do better things with their time, and then that allows this thing to be paid back within a year or two.”

“Usually two years is your rule of thumb for your return on investment in industry. And the nice part about this is that it can be repurposed. You can unbolt it and move it into a new application, or you can even sell it as a used robot,” continued Bernardin.

Eascan serves customers across North America with custom built machines like these two, working in fabrication, mechanical design, testing, assembly and automated machine solutions in sectors including aerospace, lumber, pharmaceutical, and medical and food processing industries (to name but a few).

Friday is the only event that they currently have scheduled for the public, although the Torque team jokes that perhaps there will one day be a robotic corner at the bar, or at the very least more events featuring Vender and Servo in the future.