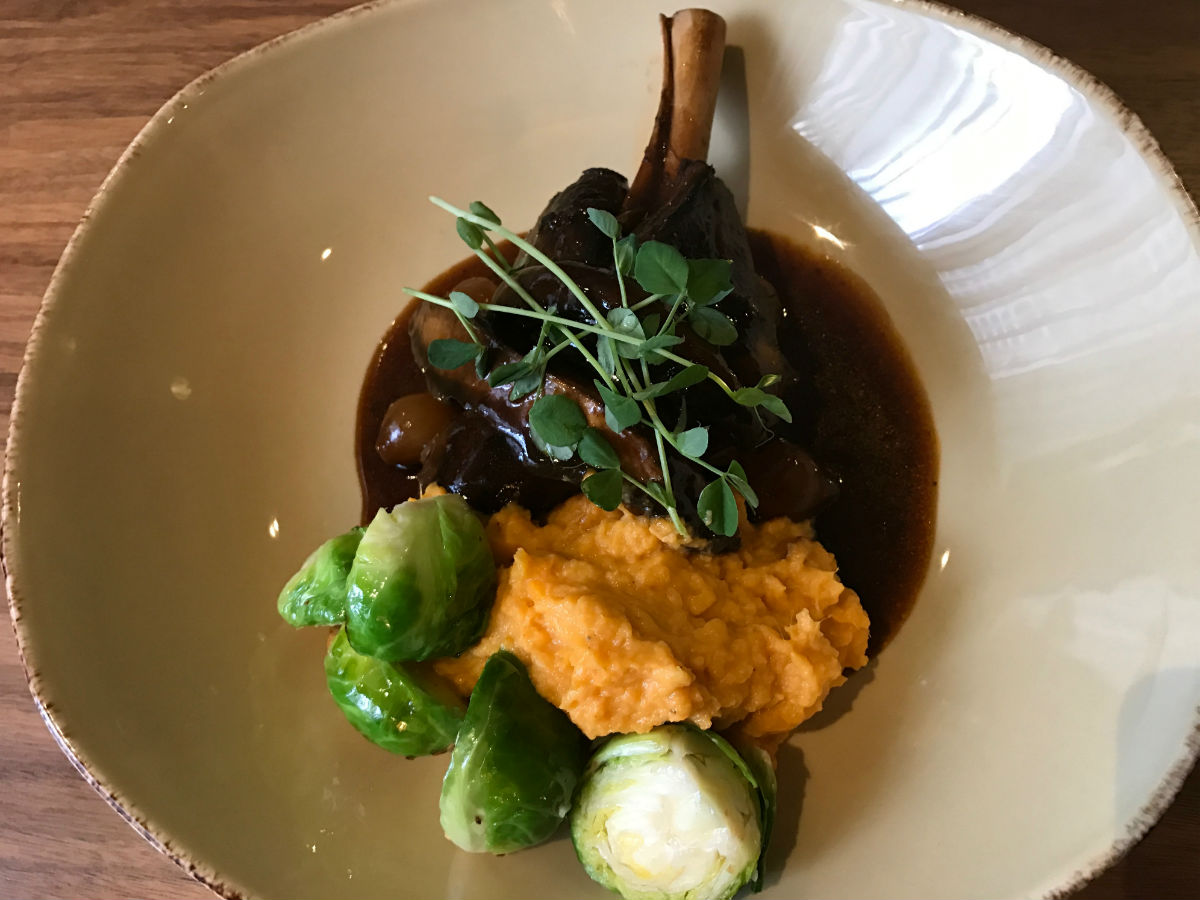 The hollandaise sauce and sugar and salt cured back bacon on the eggs Benedict at Blaze Restaurant and Lounge is alone worth dining inside Winnipeg's Delta Hotel.

It’s simple – the buttery sauce has the right amount of acidity, pairing nicely with the sweetness of the cured pork – and it’s indicative of just what you’ll get on this new menu that takes care to deliver flavour while not getting too fussy with its use of mainly local ingredients.

“It’s simpler food than we’ve done in the past, with a local, central, twist on things. [It's] Just really good food made simply.”

Outside of hotel patrons, and those who flock to the lounge for pints and burgers before and after Jets games, Blaze – which is located past the main lobby of the hotel – has somewhat flown under the radar when it comes to downtown dining, despite always having well-executed cuisine. 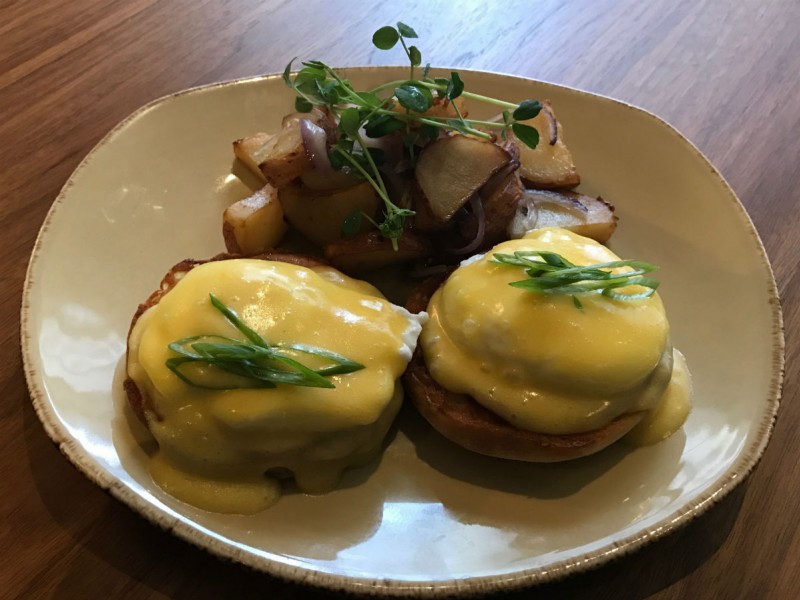 As to the Canadian contemporary cuisine, having sampled from a large selection of the menu, here are some of the dishes that will draw you in.

First off, on the bar/lounge side of things there are the wings, with the marquee being the rye and ginger variety (one pound for $12). The wings are dusted before frying, while the sauce is a rye whisky reduction that candies the smatterings of ginger. They are crispy, sticky, and delicious, and pair nicely with their new craft cocktail menu that focuses on freshly squeezed juices, along with Manitoba spirits like Crown Royal whiskies and Winnipeg’s Capital K Tall Grass Vodka. 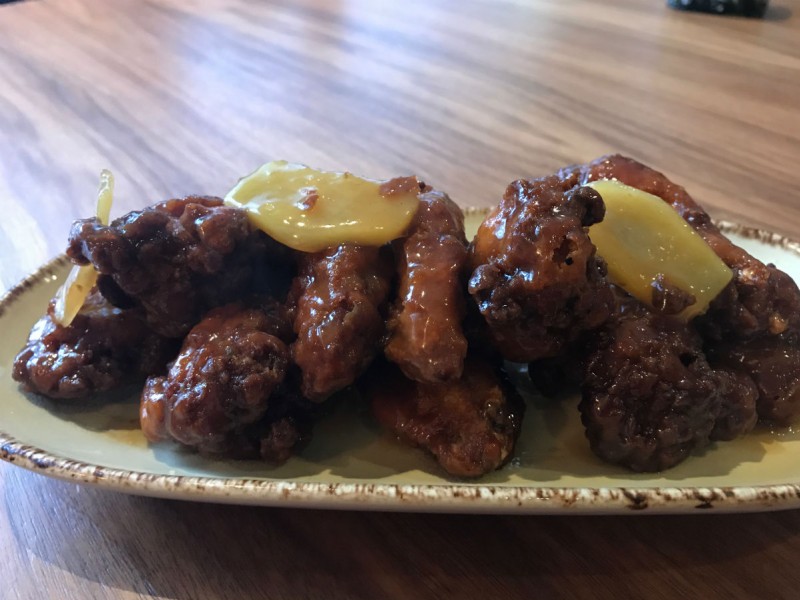 There is also a ridiculously decadent grilled cheese that emphasizes the things that people love most about grilled cheese – that being the cheese that spills out and gets crispy. It’s a triple decker on sourdough ($10, with a choice of salad, soup or fries) filled with four cheeses, while on the outside they press cheese right onto the flattop, so you get an added layer of that crispy, browned cheese that we all know and love.

In the lounge they will also be doing happy hour specials for the after work crowd (Monday to Friday, 4 p.m. to 6 p.m.) where you can get two-for-one on craft cocktails (2 oz $12 drinks) that will be launching in mid April. To compliment this, they already have live music in the lounge every Tuesday and Wednesday (starting at 6 p.m.), while on Thursdays there will be live DJs.

For entrees, there is a most gratifying double pork chop ($25), which is sous vide to just past blushing before being finished on the grill. It is served with an apple chutney, on top of a super creamy sweet potato puree with some al dente Brussels sprouts. 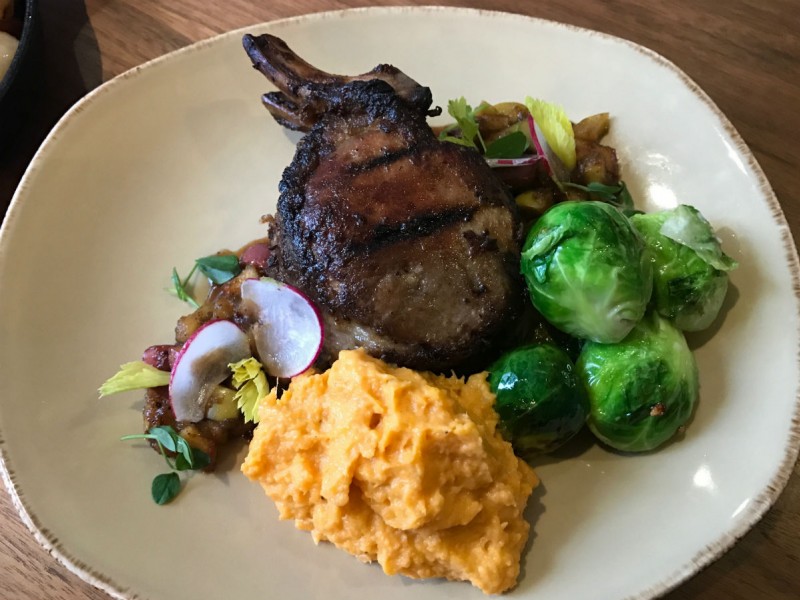 The lamb shank ($21) is also well-orchestrated, braised in a sweet/savoury stock of red wine, tomato and mirepoix (which is reduced to into a sauce) served on top of that same sweet potato puree/crunchy Brussels sprouts combo along with pearl onions and portabella mushrooms.

There’s also a pan seared Arctic char ($26) with crispy skin served with a Saskatoon berry reduction and charred carrots perched on top of a luxurious, buttery barley risotto that is so good it nearly steals the scene from the fish.