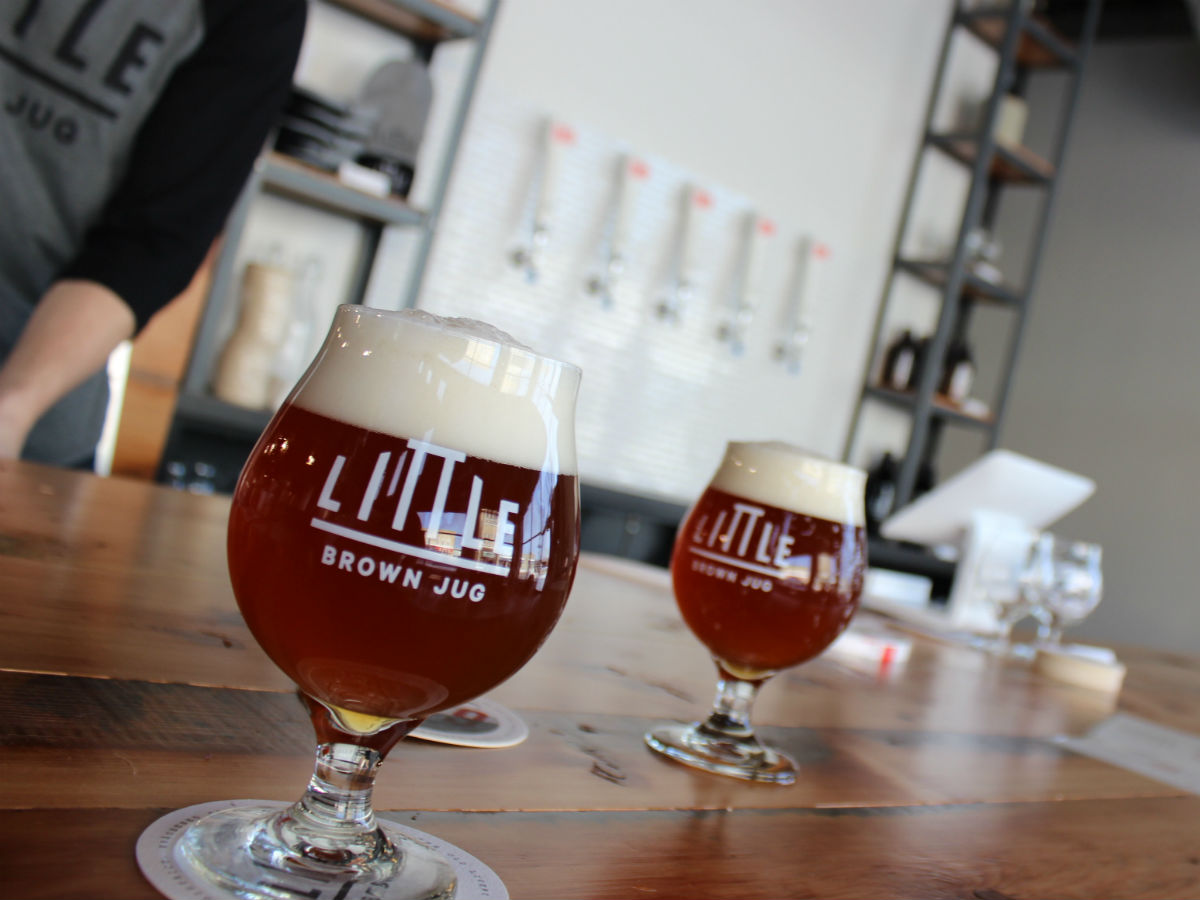 Raise a glass and take a tour at these craft breweries

After a lengthy absence (due to laws that have since been changed) craft beer fans in Winnipeg now have a lot to pore over (or should that be pour from?).

A handful of new breweries have opened within the last year, while most of our already established breweries have added tasting rooms to their repertoire – making it easy to get a pint brewed on premise in areas across the city.

Below you’ll find some of those notable new breweries, some that are opening soon, along with tours that can take you and your crew around to wet your whistle.

Newish brews (and one craft distillery)

PEG Beer Co. (125 Pacific Avenue) – The city’s newest brewpub opened back in Spring 2016, but they didn’t start slinging their own draft until September 11, 2016. It’s located right in the centre of the Exchange’s theatre district, which means that the atmosphere is always quite lively (plus, they do apropos things like Shakespeare in the Pub) and you can do FREE brewery tours every Monday at 7 and 8 p.m. for up to 25 people. They are currently brewing six full-flavour brews that have hops fans fawning. As an added bonus, because it is also a full service restaurant with great family style fare like a bone-in baked ham and airy, delectable flatbreads, PEG Beer Co. is open until 11 p.m. or midnight every night.

#sundayfunday is happening now. The All Star game is on and the faspa special is .

Little Brown Jug Brewing Company (336 William Avenue) – It just opened in November and is crafting and serving one excellent beer, the 1919 Belgian Pale Ale, which you can find on many taps across the city. It’s a delicious, sweet-yet-sour and refreshing number that pairs well with breakfast on the frozen Red River (as RAW:almond brunchers will recently attest). The tasting room itself is quite the stunner; the building is a former livery that has been completely opened up and made shine so you can see everything – from the brewer working the tanks to the storage areas – while sitting on the teak furniture in the swish tasting area. LBJ also gets green bonus points: all the heat created during the brewing process is captured and used to heat the room in the winter, while the inverse will happen with regards to the brewing cooling equipment that will be converted to air conditioning in the summer. Open Tuesday to Thursday, noon to 9 p.m., Friday and Saturday until 11 p.m. Read more about it here.

Barn Hammer Brewing (595 Wall Street) – What a handsome transformation of an auto shop this brewery and taproom is. It’s located half a block north of Portage Avenue, fairly close to Polo Park – which is great if you need to kill some time while waiting for someone shopping.  They make five signature beers along with an experimental and seasonal beer that frequently changes. Their refreshing Lousy Beatnik Kellerbeir has become my go-to après skate draft at The Common (inside The Forks Market), while their Le Sneak Belgique is a super flavourful wheat beer. Currently, the hours are: Wednesday & Thursday 4-10 p.m., Friday 3-11 p.m., Saturday 12-11 p.m., and Sunday 2-6 p.m. You can also find Barn Hammer’s beers on taps across the city.

Can we axe you a question? Do you yarn for a new growler...? New Grandpa's Sweater & Saturday Night Lumberjack graphic growlers available in the taproom until we sell out. And then we will probably order some more. • Thanks to assistant brewer @theadrienneator for her fun word skills.

Torque Brewing Co. (330-830 King Edward Street) – You can find their cans and growlers available in liquor stores across Winnipeg, while their beer is also available on taps across the city. Their taproom just opened a few weeks ago and the website RateBeer has just bestowed them with the title of “Best New Brewer” in Manitoba. Plus, at the brewery you can now get custom designed double insulated stainless steel growlers that are both super badass and will keep beer cold and carbonated for 24 hours. They currently brew four regular beers -- a stout, IPA, wheat and lager along with specialty small batches.

Brazen Hall Kitchen & Brewery (800 Pembina Highway) – The former location of The Round Table has been completely overhauled and converted into a brewpub that just opened on Sunday, March 19. On the beer side of things they are currently brewing a blonde ale and a Bière de Garde "malty artisanal farmhouse beer" (both in collaboration with Torque Brewing), while an English Best Bitter will be ready to pour soon. On the food side of things the menu is extensive, ranging from bar snacks like beet and kale chips, to salads, to a noodle section featuring handmade pastas, to a massive meat section featuring braises and smoked items. You can read all about it on their website.

Capital K Distillery (Unit 3 - 1680 Dublin Avenue) – Manitoba’s first craft distillery makes two incredibly smooth products – Tall Grass Gin and Vodka. They have a tasting room where they make cocktails, while distiller/owner Jason Kang is almost always around to give tours for up to 30 people. You can get the full story on this smooth operation here.

Winnipeg Tasting Tours – “Exploring Winnipeg… one drink at a time” these beer-tasting tours bring you by van to the city’s best microbreweries – including PEG Beer Co., Little Brown Jug, Barn Hammer Brewing and The Common at The Forks Market. On the tour guests will be provided with flights at each stop along with flatbread at PEG Beer Co. Custom tours to various breweries are also available, as are cocktail and distillery tours.

Talk about a flight you don't want to miss! Good times brewing @torque_brewing

Winnipeg Trolley Ale Trails – Everyone’s favourite orange trolley will soon also be crafting its own brewery tours, so stay tuned for when they are able to give us the full scoop.

Downtown Winnipeg Biz Tap In Tour – This walking (or group cycling) tour brings you to four of downtown’s most lively rooms where you’ll sample appetizers along with one or two draft beers at each stop. With seven participating restaurant/bars, this tour can be customized and runs approximately four hours.

Half Pints Brewery Tour – One of Winnipeg’s pioneering independent microbreweries, Half Pints offers tours every Saturday (and by special request), where brewers show you grain to bottle processes. Half Pints brews four main beers, along with fun seasonal selections like their “fruity and fabulous” Queer Beer, which they brew every year for Pride Winnipeg. They also just won “Top Brewer” and “Top Beer” (for their Le Temps Noir Batch Two) for Manitoba from RateBeer.com for 2016.

Fort Garry Brewing Company Tour – Winnipeg’s oldest microbrewery, Fort Garry first started brewing in 1930, and has since gone through several incarnations with Molson (1990) along with an amalgamation with BC’s Russell Brewing in 2007, before being sold back to a Manitoba firm in 2016. Group brewery tours can be arranged to take you through their nine-step process.

One Great City Brewing Co. (1596 Ness Avenue) – A brewpub that will feature six mainstay beers along with a few seasonals, accompanied by a menu of elevate pub food they describe as, “adventurous while remaining accessible.” It will (hopefully) be open by the end of the month. Here's their website for more info.

Nonsuch La Brasserie and Brewing Co. – They have yet to reveal location (aside from it being downtown) but they are slated to open in 2017. Some of their beers have already won awards and their website gets huge bonus points for design and tranquility (love that ocean background and overall nautical theme).

OXUS Brewing Company (1180 Sanford Street) – The tanks have been installed and they are currently tinkering with their recipes at this west end brewery that is scheduled to open later this year. For updates visit their website.

Stone Angel Brewing Co. – Opening in south Winnipeg for summer 2017. You can keep up-to-date by checking out their rather cheeky website (owners Paul M., Paul C. and James D., seem like witty fellows, while Paul C. gets bonus points for being an LFC supporter) and twitter account.

Trans Canada Brewing (1290 Kenaston Boulevard) – Set to open in mid-2017. You can follow them on twitter for updates as they come in.

North City Growlers – Since October 2014, these folks have been creating custom designs on glass, stainless steel and ceramic beer growlers, while they also make fantastic touristy gifts like Cap Maps, oak barrels, and custom designed beer tap handles. Pretty much, if you are looking for some sort of beer merchandise or mechanism, they can craft it for you. Check out the full product line on their website.

We just dropped off a couple of custom growlers for @huronwoodwork, picked up our very own Manitoba Home wood block and met @waiting.for.sunday at @littlebrownjugbrewing. It's always great meeting other local #makers!

Brewery fans please note: we plan to continually expand this article, and to use it as a standalone in the EAT section on Tourism Winnipeg's website. If you notice something new we are missing please email mike@tourismwinnipeg.com so we can keep it updated. Cheers!