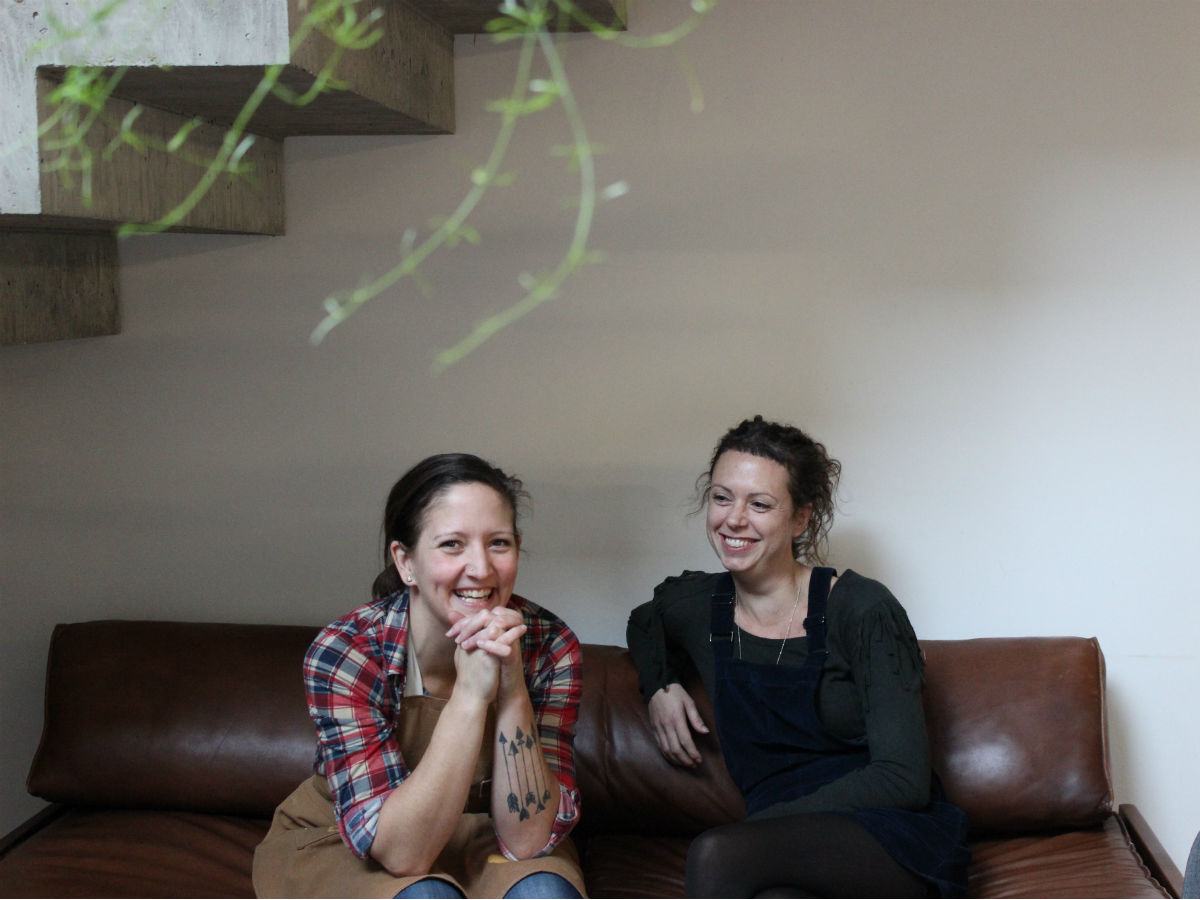 Pamela Kirkpatrick and Megan Heke in the Forth atrium (PCG)

Why Forth is also a bit of a first

How one of Winnipeg's most beloved new spaces came together

Forth (171 McDermot Avenue), having only opened in February, is already competing for the titles of best coffee, best cocktails, best event space, best snack plates, and most-Instagramed space in the city.

If you are counting at home that makes it a quintuple-threat, a rarefied feat indeed.

The coffee is pretty lovely stuff, they have the texture of a flat white down to a science, as each sip coats your mouth with micro bubbles that, to use the stereotyped term, feels so velvety on the palate. The beans could not be fresher; having been roasted right inside the building by  Dogwood Coffee Co., while café manager Renée Girard is an aficionado when it comes to creating cups.

The craft cocktails in the Bar at Forth (located downstairs) are top drawer. Bar manager Josey Krahn has been making some of the best drinks in the city for years at spots like deer + almond, and his team of leather apron wearing bartenders have sour and frothy drinks on lockdown.

The tiny kitchen, run by chef Pamela Kirkpatrick, dishes out tasty comfort food snacks, along with Instagram-post-inducing avocado toasts, much in the smooth, attractive way that Steve Nash used to dish out the rock in his Phoenix Suns heyday.

And, the space is simply gorgeous.

There’s a semi-secret rooftop patio that has a bar, sturdy wood stools and tables made by owner Megan Heke’s husband. It comes with some of the coolest urban views of Winnipeg, particularly toward the north west where you have a postcard view of the handsome heritage J.H. Ashdown Hardware building. (The rooftop patio is currently closed for winter, but I attended a lobster boil up there in the summer and it was pretty damn special. There will also be a street side patio that will open again this spring).

There are movie nights every Wednesday, along with some kind of happening every other night where you can learn about fun things like biodynamic wines (from these guys), terrariums (of which every apartment should have at least two), or how to be truly postmodern without becoming too pretentious about it.

Plus,  Lisa Kehler Art + Projects – a marvellous contemporary commercial gallery, which just finished up the first Canadian solo show by Daniel Johnston – is located on the basement floor.

And finally, were that not enough, in our “ Where Chefs Eat” series Forth was the room that was mentioned the most – particularly when it came to avocado toast and cocktails.

Anyway last week, while sipping a flat white so silky it could have been used to make the Queen’s pyjamas, I sat in the charming atrium space at the foot of the cement  stairs with Forth executive director Megan Heke and chef Pamela Kirkpatrick to talk about the space, while the Twin Peaks soundtrack played in the background.

Happy Friday! Heads up: we'll be hosting The HUB's 1yr anniversary party tonight from 8pm-2am. Tickets are available for purchase at eventbrite.ca or at the door. Visit their Facebook page for more details + the night's full lineup! by @wherescaldo #coffeeshopcorners #exploremb #exploretheexchange #wpgnow #design

How would you define Forth?

Megan: For me, this building is about so much more than coffee and cocktails and food – although that’s great if it is just that for people too. But, there are so many things that different people can take away from this building depending on who they are personally.

It’s a project. It started with a building that is empty, so now it feels like an extension of my home – it has become a very personal space for me. The way that we create culture here means a lot to me and the details are important.

So, it’s tough to say Forth is “blank” – but to me Forth is a project, it’s community, and it’s also a great place to get the best coffee and cocktails and food in town…. But you have to be a little audacious to say stuff like that.

How did the design come together?

Megan: One of my favourite things to do is to take people through the room who haven’t been here before to explain the materials, because most things were chosen with great care.

The chairs on the main floor at the front are Danish school chairs, while the ones at the back are British school chairs. We had really hoped to find these gorgeous metal and wood Canadian school chairs that were common in the 60s, but they don’t seem to exist anymore.

The flooring on the main floor is reclaimed wood from old growth trees that fell into the Ottawa River. It’s simply called River Birch; it’s super dense and beautiful. Most of the lighting in the building is post-war East German factory lighting that has been refurbished. The bases on the tables in the café are reclaimed brass that we pulled from the building when we demoed it. We had actually hoped to do that with more of the materials but most of them weren’t useful, but we did build the tables out of those brass pieces.

A guy named  Jonas Klock out of Berlin did the interior design for the space… he set the tone, he set the aesthetic, but we were given a lot of freedom to extrapolate from there.

Pam, what made you want to come work here?

[For context, the kitchen in Forth is tiny, and before this Kirkpatrick had opened and run the excellent boutique bakery Cake-ology, which has always been a Tourism Winnipeg and local favourite.]

Pamela: Well that has been a weird transition [going from owning Cake-ology to here] and I spent a long time talking to people like Talia [Syrie, the chef/owner of The Tallest Poppy who introduced Megan to Pam] about what exactly I should be attempting to do now, as it is not as if I want to walk into a restaurant and be a line cook somewhere – I’d be a terrible line cook.

I’m a great cook, but I’m not a very good listener. I’ve been self-employed for the past 10-15 years, so starting a project was the best scenario for me – walking into someone else’s kitchen was not going to work.

But, knowing the dynamic crew that was behind this, and the people who were already in place when I came on, it all seemed pretty surreal. Josey and I both found out at about the same time we were both on [as managers]… we ended up doing a little dance.

How do the spaces within Forth work?

Megan: There are three sections of the hospitality aspect of Forth – the kitchen, the café and the bar – and each of those is headed by a very distinct manager… Those people have a lot of autonomy and I expect them to kind of run those whole worlds as if it is theirs – and they do; it is Josey’s bar, and Pam’s kitchen, and Renée’s café.

So, there is an aspect of entrepreneurship that you don’t necessarily get when you are just a hired gun elsewhere, with oversight and support. I am there making sure the bills are paid, and that everything fits within the ethos I would like to accomplish.

When I’m feeling grateful of where we landed this early on, I know that I couldn’t have done it without those three very specific individuals and I certainly don’t think it would be what it is.

But, we still have a long way to go and I think in a year from now we will all be really proud of what we have accomplished – we are all still very much in a learning curve stage, figuring out what this is.

The Café is closed at 5pm today but the Bar is open until 1am! #imbibegram #exploretheexchange #wpgnow

What we’ve noticed at Tourism Winnipeg is that this is arguably the most Instagramed café/bar/space in Winnipeg. Does that make it hipstery?

Megan: Well, that is a wonderful thing [that it appears so frequently on Instagram]… but does that speak to what kind of clientele we have, yes and no.

I struggle with this idea that coffee culture is exclusive, or that beautiful décor is exclusive.

One of the things that pleases me a lot is that this building is starting to become worn in and well-loved. People literally come in and move furniture around like they are in their own home.

There was a time when we first opened that it felt very precious and very hip and very sterile, and we would see people walk in and look around and think “I don’t belong here” and turn and leave.

And that’s why I struggle with a term like hipster. It’s not because it’s not cool, or because hipsters are not welcome here; like whoever these people are, if they still exist, they are very welcome here, but so are retirees, and children, and people who aren’t stereotypically cool. I’m a middle-aged mother of three, and I feel very comfortable here –  and I should.

For the sake of brevity, as this interview went on for many more pages, here is one final fact:

Forth has 30 employees, the majority of whom are artists, musicians, and creative types who help contribute to the overall feel (like saucy anecdotes when you are ordering your avocado toast) along with its nearly daily events, which include parties with DJs, guest cooks on the rooftop patio, and artisanal workshops.