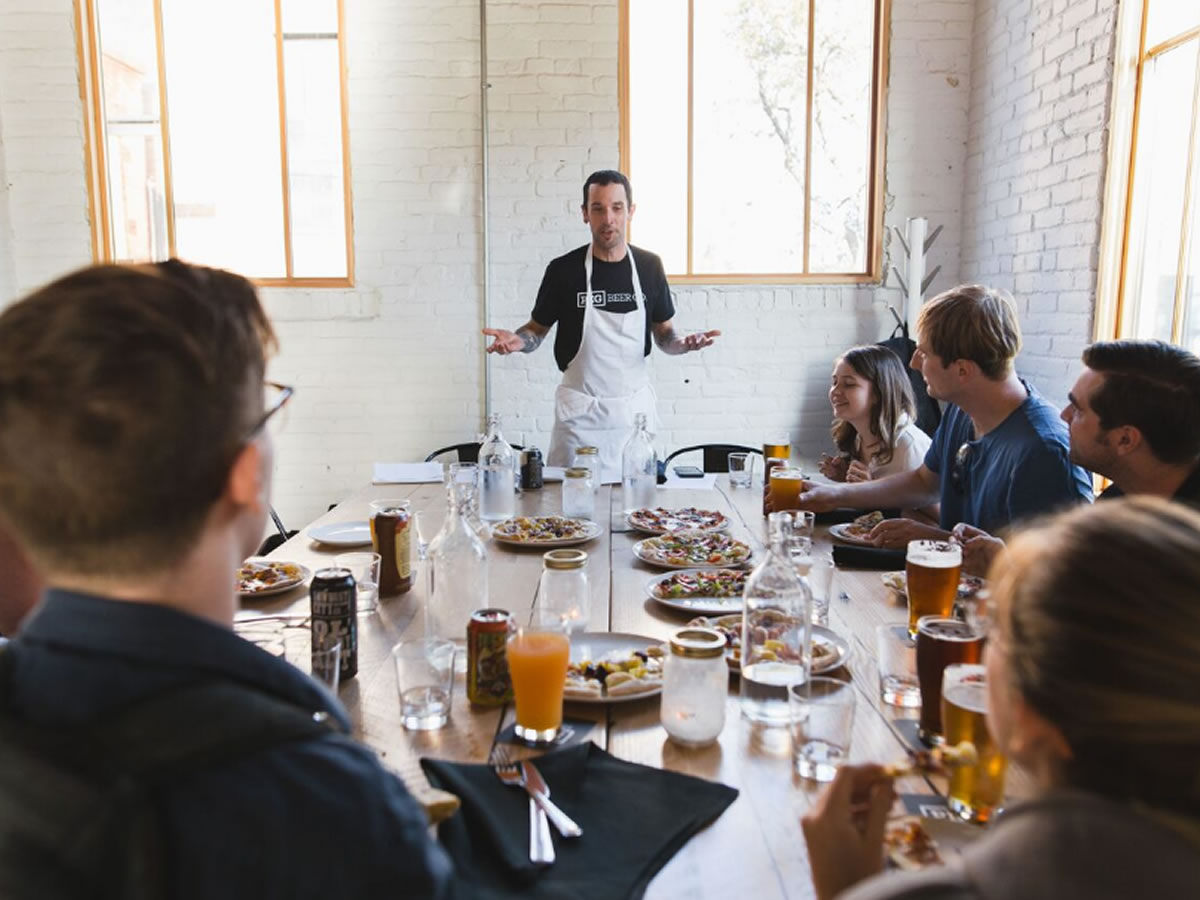 Brunch? Beer? Worldly cuisine? Yup, Winnipeg has a tour for that

Brunch? Beer? Worldly cuisine? Yup, Winnipeg has a tour for that

Sometimes you have to go with a pro when you are looking to discover a city's culinary scene.

Here in Winnipeg, that's been made easy with the likes of the West End Biz, Exchange District BIZ, and Downtown Winnipeg BIZ, all of whom provide an assortment of tours that will bring you folks to some of the city's best -- and sometimes lesser known rooms -- in search of fine food and drink.

The motto of Winnipeg's West End is "taste the world," and with over 90 restaurants in this area -- the majority of which are ethnic hole in the walls -- this is the spot to take your tastebuds globetrotting.

This area is where you'll find some of the city's best South East Asian food, with notables including Pho Hoang (794 Sargent Avenue - in fact, Sargent is simply studded with great Vietnamese food), Winnipeg's Filipino standout restaurant Jeepney (714 Sargent Avenue), and the legend that is Magic Thailand (842 Logan Avenue). There's also no shortage of Ethiopian, East Indian, Cantonese and Caribbean spots.

Dining at Café Dario during a Around the World in a Few Blocks tour. (Photo by Robin Summerfield.)

The "Around the World in a Few Blocks" West End BIZ food tour focuses on a mix of celebrated establishments - like Cafe Dario, Shawarma Time, Casa Grande and Morden's Chocolates -- while also introducing diners to spots that are only on certain locals' radars. Each week you have new restaurants on the tours -- which only makes sense when you can find nearly 100 restaurants here spread over a couple city blocks -- while your guide also offers insight to this unique area of the city (with its jazzy murals and cool shops).

The "Around the World in a Few Blocks" tour runs once a week from July through to September 7th. The first one of the summer takes place on Thursday July 7th (get the full schedule here).

Tours can be booked (two days in advance please) by calling the BIZ at 204.954.7900 or by emailing Joe at joe@westendbiz.ca. Vegetarian meals are available.

Over the past several years The Exchange has continued to grow into its own as the hip centre of the city. It's a place where astute locals, who have often lived in other worldly cities, have brought new ideas home, opening trendy shops in handsome heritage buildings.

Culinary wise, with over 50 restaurants and bars The Exchange covers everything from pre-theatre dinner, to fine dining, to sushi, to casual lunch-centric spots, to pubs, to new wave coffee shops that will fill your Instagram feed. (It's also home to the brand new PEG Beer Co., where you can meet chef Aron Epp, who is pictured in the lede photo explaining his food on a recent tour. Photo by Mike Peters Photography) 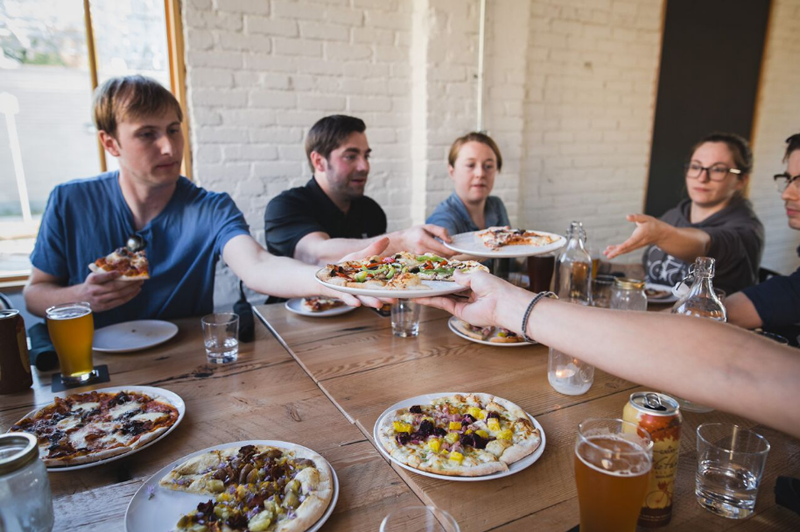 The Exchange District BIZ offers two culinary tours during the summer, both of which run once a week July through August. On Mondays, from 5 p.m. to 7:30 p.m., you can take part in the Little South America Food Tour, which will take you to Carnaval Brazilian BBQ, Corrientes Argentine Pizzeria and Hermanos Restaurant and Bar -- all of which are conveniently located on Bannatyne Avenue.

On Tuesdays from 5 p.m. to 7:30 p.m. you can do the Devour the District Food Tour, which celebrates the Exchange's eclectic offerings. Here, you'll feed on farm to table offerings from Peasant Cookery and PEG Beer Co. -- Winnipeg's newest brew pub, along with flavours from Blufish Japanese Restaurant.

Both tours are $70 per person, which includes alcoholic beverages at all the stops. You can book at this link.

The most culinary tours in the city come courtesy of Downtown Winnipeg Biz, who are offering 6 tours this summer -- most of which are just $30 -- that altogether would fit the bill for a full-day feast.

For starters, there's the most important meal of the day, which they showcase in The Breakfast Club tour. Tour stops include a rotation via The Original Pancake House, Prairie 360 (which has the best views of the city), Nick's on Broadway (which makes a mean breakfast), The Pint and The Fyxx. Tours run on July 3, September 4 and October 2, from 9 a.m. to noon. (Get your tickets here).

Next up is the Patio Crawl tour, because downtown is awash with outdoor spots that bathe in all that glorious Winnipeg sunshine. This tour takes you to a rotating roster that includes The Keg, Pony Corral, Earls, The Old Spaghetti Factory at The Forks (which looks out onto the Assiniboine River, The MET (with its stunning rooftop patio), and Carbone Coal Fired Pizza (which is where downtown's cool kids are often found). This summer it runs on June 30, July 7, July 22 and August 19. Tickets are available here.

On the boozy side of things, Downtown Biz offers both a Tap In beer-centric tour, along with a Winnipeg Wine tour. Beer stops can include Shannon's Irish Pub (a classic pub), the Garrick Hotel (a classic dive), Carbonzo's Pizza Pub, Rudy's Eat & Drink, The Keg, The Pint and Carbone Coal Fired Pizza. Tours run June 29, July 6, 21, August 12, and September 15; tickets here.

You get five stops total, at either Blaze Restaurant & Lounge (which also has a great burger), DT Urban Kitchen + Oyster Bar (because shellfish and sauvignon blanc belong together), Prairie 360, The MET, Resto 12, SMITH Restaurant (possibly the most handsome lounge in all of Winnipeg), The Merchant Kitchen (#bestfriedchickenever), The Loft Salon, and the always-classy VG Lounge in the Fairmont Winnipeg.

There is also the option of booking this tour in conjunction with a stay at the Alt Hotel, whereby you get two tour tickets and a night stay for only $285. Wine tours run June 24, July 29, August 26, September 30 and October 28; tickets available here.

Arguable the coolest food tour is A Moveable Feast, which will see you joining a hip crew on bike to five restaurants located all across the city. There's too many restaurant taking part to name, so you'll have to check out all the participating restaurants here. Tickets to this beauty are $40 per person (you need to bring your own bike), the dates are June 22, July 13, August 17, September 14 and October 1, and the tour runs from 5:30 p.m to 10 p.m.