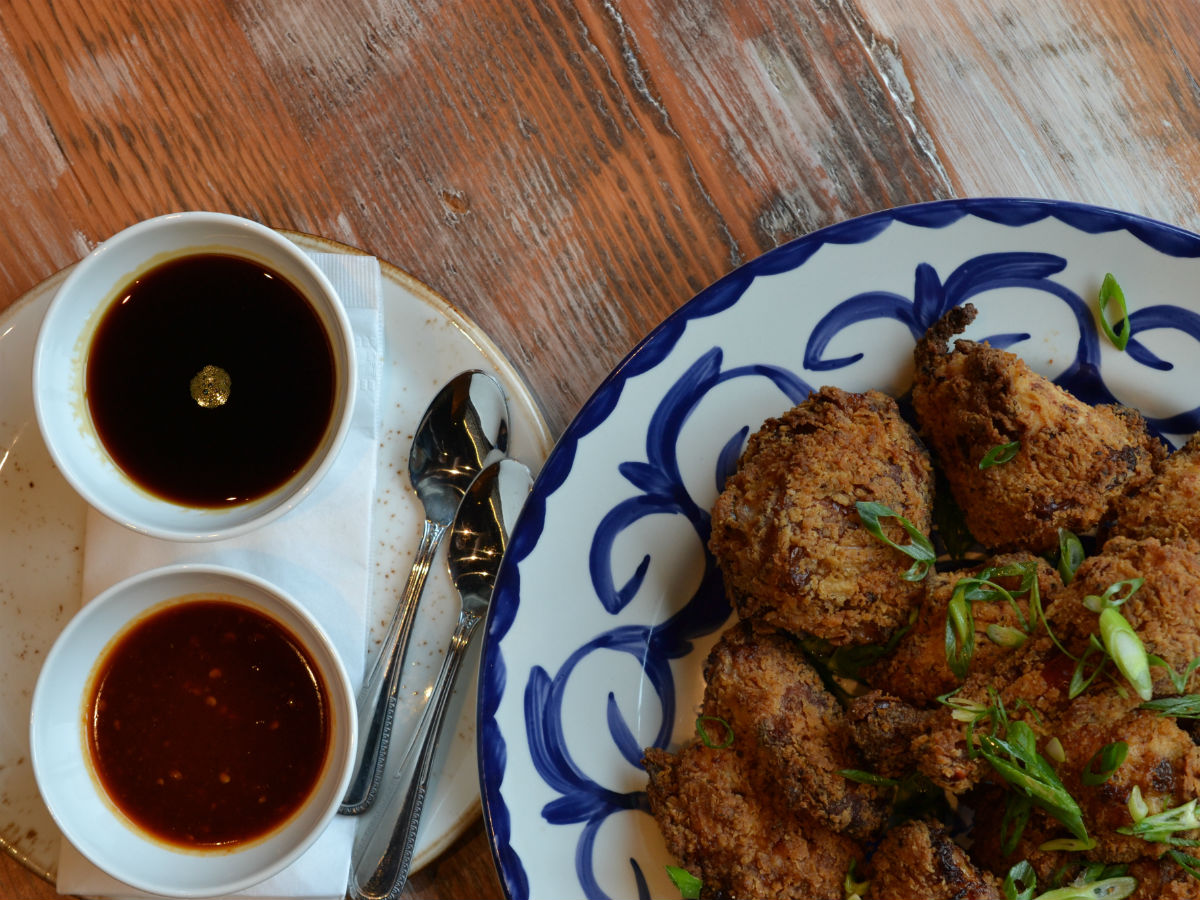 There are many things that make The Merchant Kitchen cool.

For starters, it features a massive rooster mural (by local artist Pat Lazo) which overlooks a stately open kitchen, the dining room is filled with purposely worn wooden tables featuring red accents in glassware and chairs, while the crisp white bar beckons you to come enjoy some handmade cocktails.

It also features an airy, unisex bathroom where you could find yourself washing hands in the city's slickest bathtub-style sink beside a member of the opposite sex (ooh la la).

And if that isn't enough, The Merchant shares a door with downtown's hippest new hotel, the Alt, and is mere steps from the MTS Centre, pretty much guaranteeing it to become the hottest new dining and drinking spot downtown. 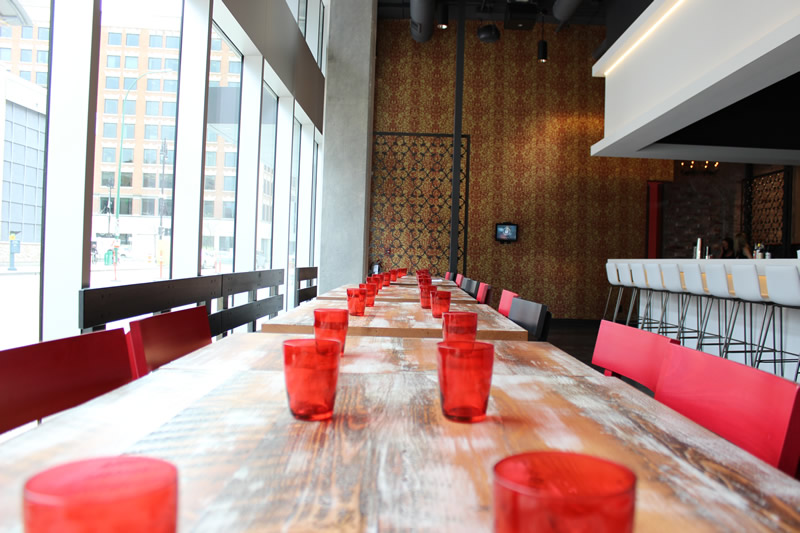 Every detail in The Merchant Kitchen screams cool (PCG)

With all that being said, it should also thrive because the menu is lively and eclectic, celebrating the sweet, sour and spicy flavours of the hawker carts and street foods of Asia and Latin America.

The restaurant is by the same folks behind the popular, always consistent Pizzeria Gusto in River Heights -- including owner Bobby Mottallo and a group of investors who have been in the works on the space for a number of years -- and executive chef Eric Lee. 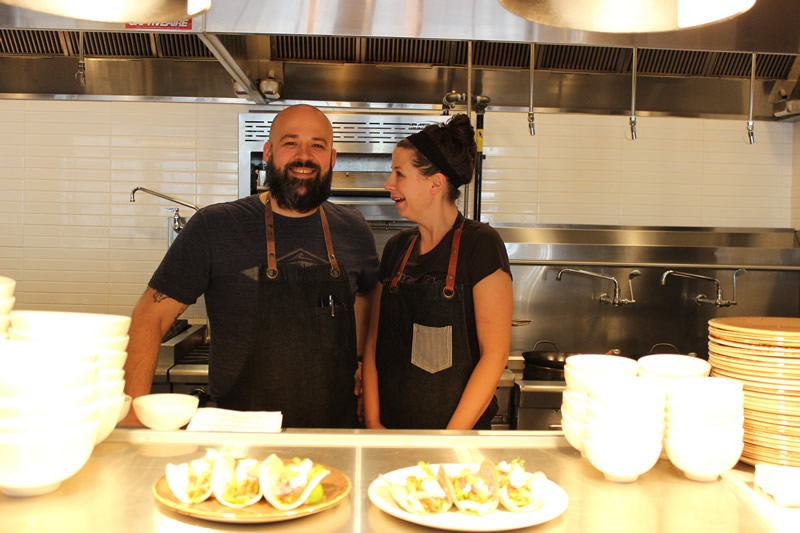 It just officially opened on Friday (May 8), although a couple hundred people did get a preview of their food at the grand opening party for the Alt two weeks ago, where the canapés received enthusiastic thumbs ups -- especially the kimchi lettuce wraps which happily feature on the menu (more on that to come).

The drinks list, crafted by Toronto-based Robin Kaufman -- one of Canada's top bartenders -- features jaunty takes on standards which you would normally sip when you are on vacation in hot climates. 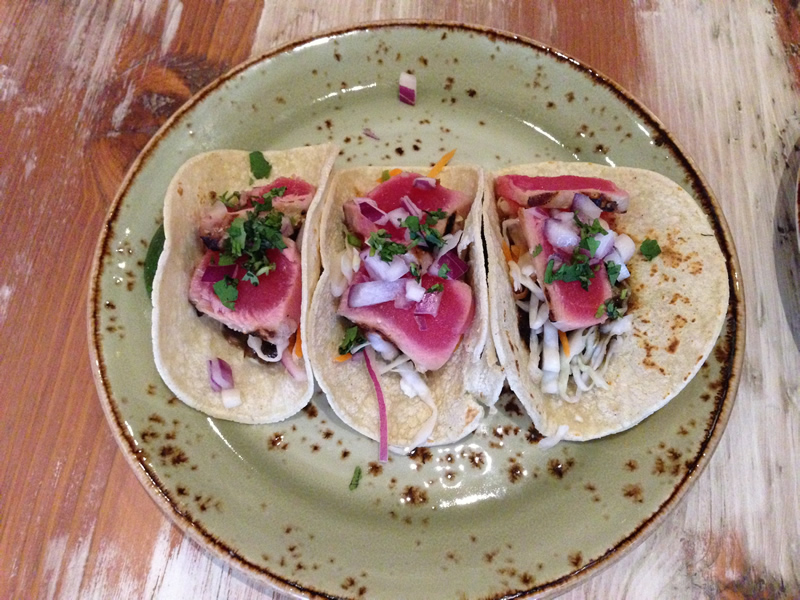 The Tokyo Drift ($9), which features watermelon, sake, gin and star anise syrup served in a slender highball glass, is accurately described on the menu as "refreshing and complex, but very crushable," while their dark and stormy ($10) mixes Chinese five-spice with dark rum, ginger beer and lime. Our favourite was the Margarita Picante ($12), which is sweet, spicy and smoky via some jalapeño-infused agave and a touch of Laphroaig scotch.

For food, we had to start with the Kimchi Lettuce Wraps ($16), which my friend and food writer from Calgary Dan Clapson had aptly described as such at the Alt party:

"It's sort of hard to describe how good this kimchi and prawn salad wrap was tonight so just picture when Rachael Leigh Cook took off her glasses and let her hair down in She's All That and we all realized she was actually a beautiful young lady! That moment is this salad wrap." 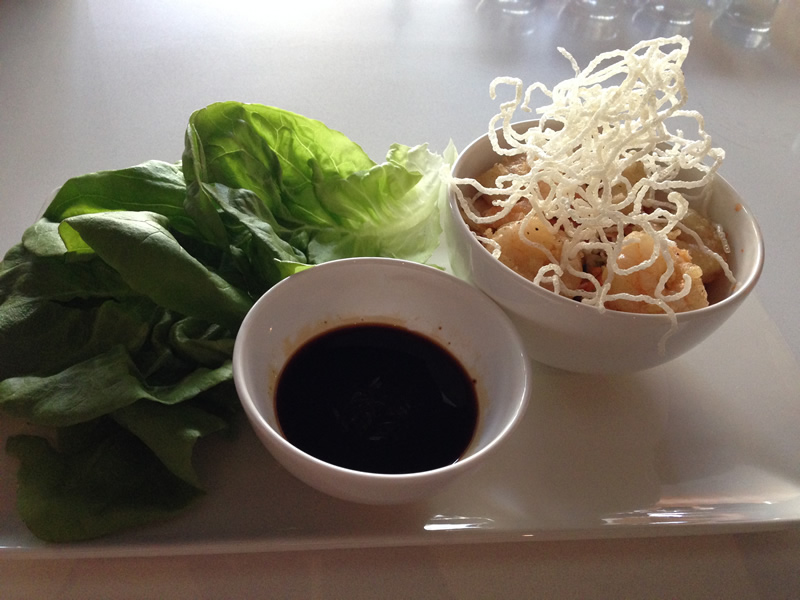 While I can't really beat that description (elevated lettuce wraps will now always make me think of Freddie Prinze, Jr. films), I should elaborate that the kimchi is pungent and just spicy enough as to not overpower the crispy prawns, while altogether one bite brings big flavours while providing multiple textures. And, unlike Rachael Leigh Cook's career, these wraps will surely have more staying power (sorry, I had to).

The menu is actually quite large and lends itself to sharing, although you could be selfish (or simply be having lunch by yourself at the bar) and enjoy one of several sandwiches, including the king of all sandwiches, that of course being a Bahn Mi ($15), or a Tokyo Dog ($12) whose ingredients, including kewpie mayo and toasted nori is a sure tip of the hat to Vancouver's Japadog franchise. They also have soupy bowls like ramen ($14) and tortilla soup ($15) and a selection of sexy sounding salads. 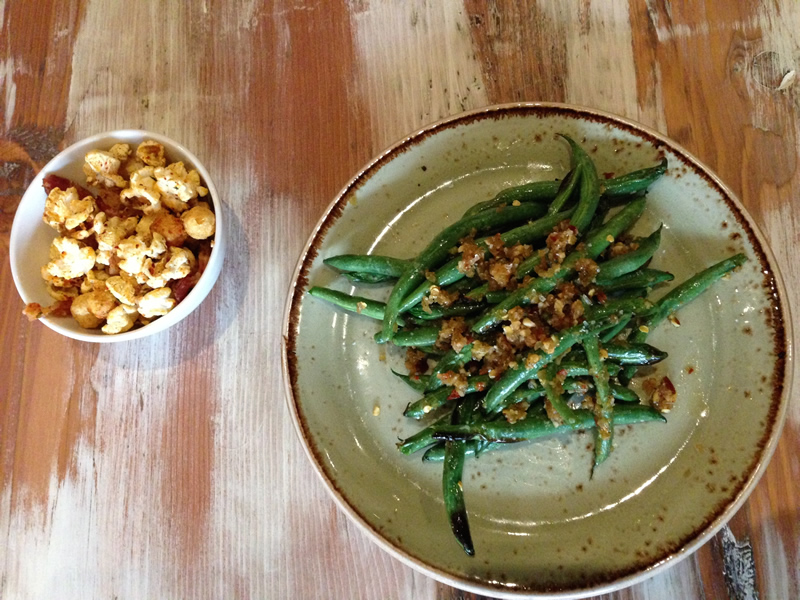 We were in a sharing mood so we went with the Dry Fried Green Beans ($12) -- which were spicy and crunchy and are just begging to be washed down with a cold beer, and the Thai Style Wings ($14) -- which came with a tangy salted mango and mint sauce.

We also ate our way through two of the tacos, with the Carnitas ($10 for 3, featuring queso fresco and pickled red onion) being a real standout, while the Tuna ($15 for 3) also gets points for freshness and vibrancy.

The braised pork shoulder in the carnitas tacos is so juicy and flavourful that I was willing to keep my elbows up, like Charles Barkley pulling down a rebound, to guard my wife from getting to the final taco after we each had one. (We were then informed that you can always add an additional taco to the platter so you both get two, which will come in handy next time around). 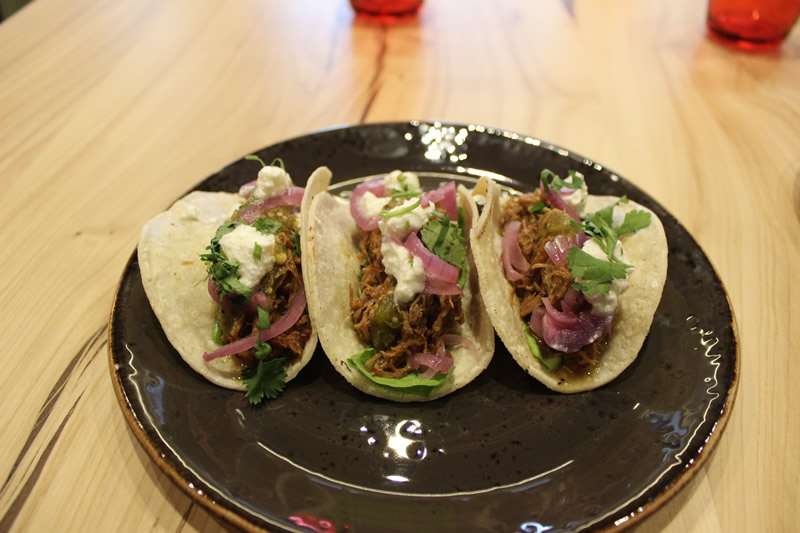 There are also share plates for groups like the Korean Fried Chicken (10 pieces, brined and served with garlic chili sauce and soy syrup for $44) which I will surely be back for soon -- perhaps even this week for lunch if some people want to join me.

The Merchant Kitchen is located at 311 Portage Ave (although the door is technically on Donald St., right beside the entrance to the Alt Hotel).

It is open from lunch to late night.

​A Peg City pasta guide: Because sweatpant season is upon us