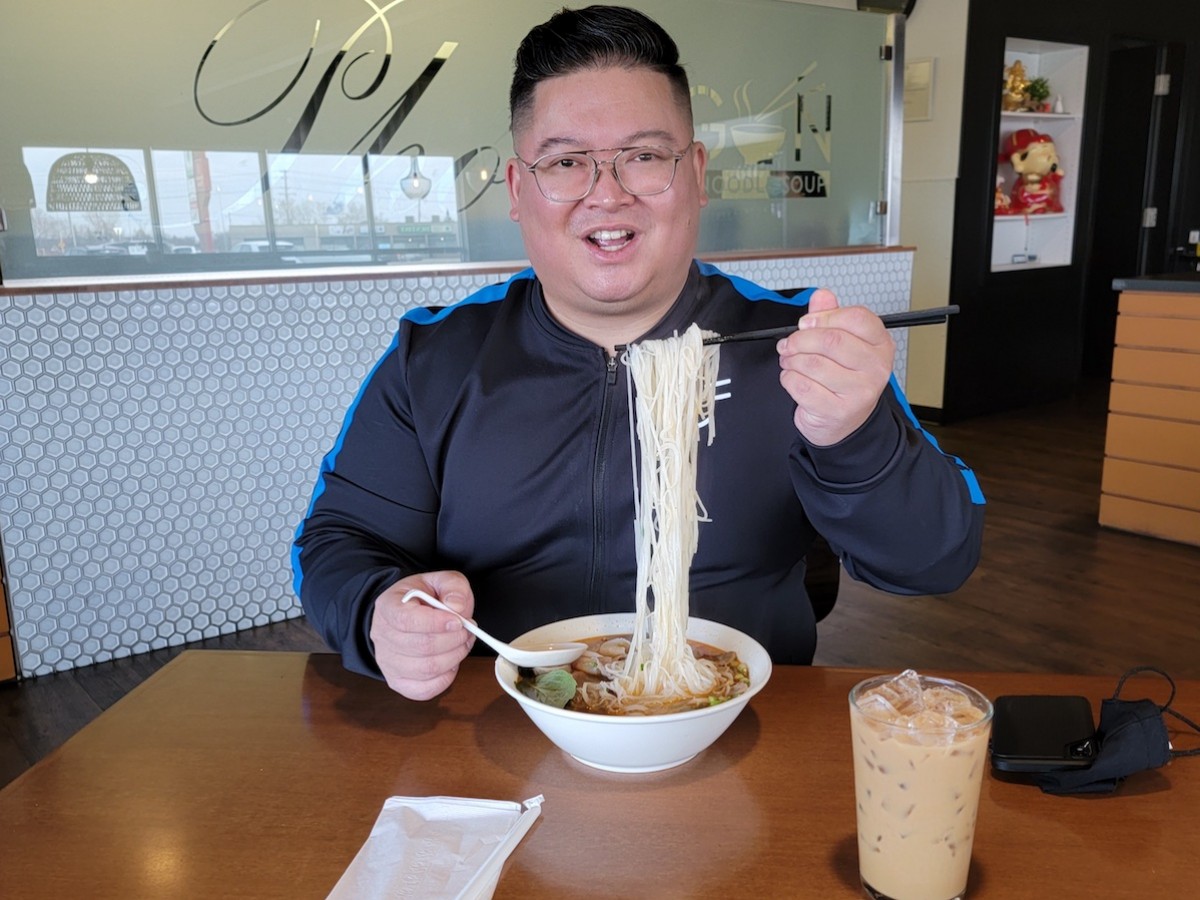 Winter in Winnipeg has arrived and we have a great variety of delicious Asian noodle soups to keep you warm and cozy.

Growing up in Winnipeg with a Chinese father and Vietnamese mother, noodle soups were a staple for me. In winter, my mom was constantly stewing a huge pot of beef broth filled with meat and bones that would be simmering on the stovetop for two days. She would get specific cuts of beef from our butcher at Sun Wah Supermarket in Chinatown, where we’d also pick up ramen noodles from all over Asia.

The creation of broth is a labour of love and the foundation to a great soup. Broth can also be beneficial to your body as the collagen, gelatin, glycine and glutamine in it can support joint and gut health. At home during the pandemic, I’ve been using bone broth from Winnipeg business Bones & Marrow Broth Company to recreate some of my mom’s recipes and they have turned out amazing.

Noodles are the backbone to a great soup and can be divided to wheat-based (lo mein, ramen, udon) and rice-based (pho rice noodle, rice vermicelli) from different regions of Asia. All of these varieties are well-represented in Winnipeg.

In the early 20th century we had so many Chinese restaurants in Winnipeg's Chinatown. In the '90s, immigrants from Vietnam brought pho noodle soup to the city, with so many of these spots still operating in the West End today. And now, within the last 10 years, we’ve seen a boom of Japanese ramen restaurants open up too.

Aroma is located in the heart of old St. Vital at 741 St. Mary’s Road and is owned by my friend Chef Louie Lui, who learned his craft at Red River College Culinary School. Aroma recently celebrated its second year anniversary and I was invited down to dine in for an intimate feast with my close friends. In my opinion, it is the best new Asian fusion restaurant in Winnipeg, marrying hometown flavours from Hong Kong with a bit of Japanese and Korean influences. Aroma Bistro is famous for two things: the homemade wontons and red chili oil. We tried two Asian noodle soup dishes, the signature red chili snow beef udon and a new menu item, fried chicken ramen. Both soups came with a sunny side up egg which I’m a huge fan of and a punch of flavour. Visiting Chef Louie is the best part of the experience as his positivity and passion for the food is infectious. Dine in space is limited so call ahead, they offer pickup or delivery and the food travels great.

I first met Chef Atsushi Kawazu three years ago through a mutual friend. He had moved to Winnipeg from Kyoto, Japan, and was very eager to cook his signature ramen, which he was originally doing out of his home. I was invited over to his place to try, and I’ve been in love ever since.  He stages ramen pop up dinners regularly, and I was very fortunate to catch his latest one at Little Goat Food & Drink in St. James. with a group of friends.  It was a three-course dinner which started off with Atsushi’s soon-to-be famous Japanese chicken karaage and his Ramen. What I love about Atsushi’s ramen is his attention to detail: the broth has an intense pork broth flavour, carefully cut bamboo shoots, marinated soft egg (I always order an extra), and the slowly braised pork chashu, which is melt in your mouth delicious. Follow Ramen Takeuma for his next pop up schedule. He will teach you all about Japanese culture and food as he is now known in Winnipeg as “The Ramen Guy,” after all.

When I’m in the south end of Winnipeg and I’m craving pho (if my mom didn’t make any) I visit Benson Lam and his family at 2696 Pembina Hwy, conveniently located near the University of Manitoba. I always order the “Pho Dac Biet” (aka the deluxe pho beef soup) — it has all varieties of beef such as sliced steak, tripe, brisket, tendons and meatballs. The broth comes out so hot with potent beef flavours at Pho Saigon. I’m big on having Sriracha and hoisin sauce on the side; squirting it directly in the broth ruins it for me so I like to do some dipping instead in the condiments as I eat. After a big bowl of pho you must have a Vietnamese coffee with condensed milk — it will set you up right for the day. And yes, I have to bring up a pronouncing correction: Pho is pronounced “fah” not “foh” in Vietnamese.

A new addition to the Fort Richmond area at 2795 Pembina Hwy, Gol’s specializes in Chinese Lanzhou hand-pulled noodles. When I walked in I was amazed by the cherry blossom décor and Chinese artwork. Also there’s a window that showcases the kitchen and team, so you can watch them pull and cut the noodles fresh to order. I order the signature beef Lanzhou noodle soup, the noodles for which you choose the thickness of on a scale of 1 to 10 (I’m an eight as I love thick noodles). You must visit for the full experience; I felt like I was eating in mainland China.

I have grouped together these restaurants as they are co-owned and operated by the Winnipeg Ramen Godfather himself, Chef Edward Lam. Yujiro has long been a staple for sushi in River Heights at 1822 Grant Ave. Around five years ago Chef Lam started offering ramen during lunch service—which became incredibly popular—and from that time I’d argue it’s been a catalyst for other ramen restaurants to open up in the city.

Lam and the team has since opened up two more restaurants— Gaijin Izakaya (located at 1575 Regent Ave), and Saburo Kitchen in the Hargrave Street Market. I totally missed dining-in for ramen during the lockdowns; it’s definitely better to have in the restaurant as I need to have the broth piping hot. I recently visited Yujiro for lunch and was so happy to see it so busy; we were fortunate to find a seat. I had the spicy chicken kaarage ramen, the snow had just hit Winnipeg so I sipped and savoured that broth for as long as I could and it hit the spot. The miso-forward broth is just spicy enough to make you break a little sweat, while this ramen also has stir-fried veggies on top for some added sweetness. For Winnipeg Jets pre-game I always visit Saburo Kitchen (which is led by chef Jil Osias) and order the Tantan Ramen. It has a rich peanut broth with pork that is so comforting, plus it pairs well with the lighter Japanese beer on draft, making it a great combo before you walk next door to cheer on the Jets. All three spots have a great ramen selection whether you are looking for richness, some interesting styles that meld Chinese and Japanese cooking, and of course, plenty of spice from the various chili oils if you are looking for some heat this winter.