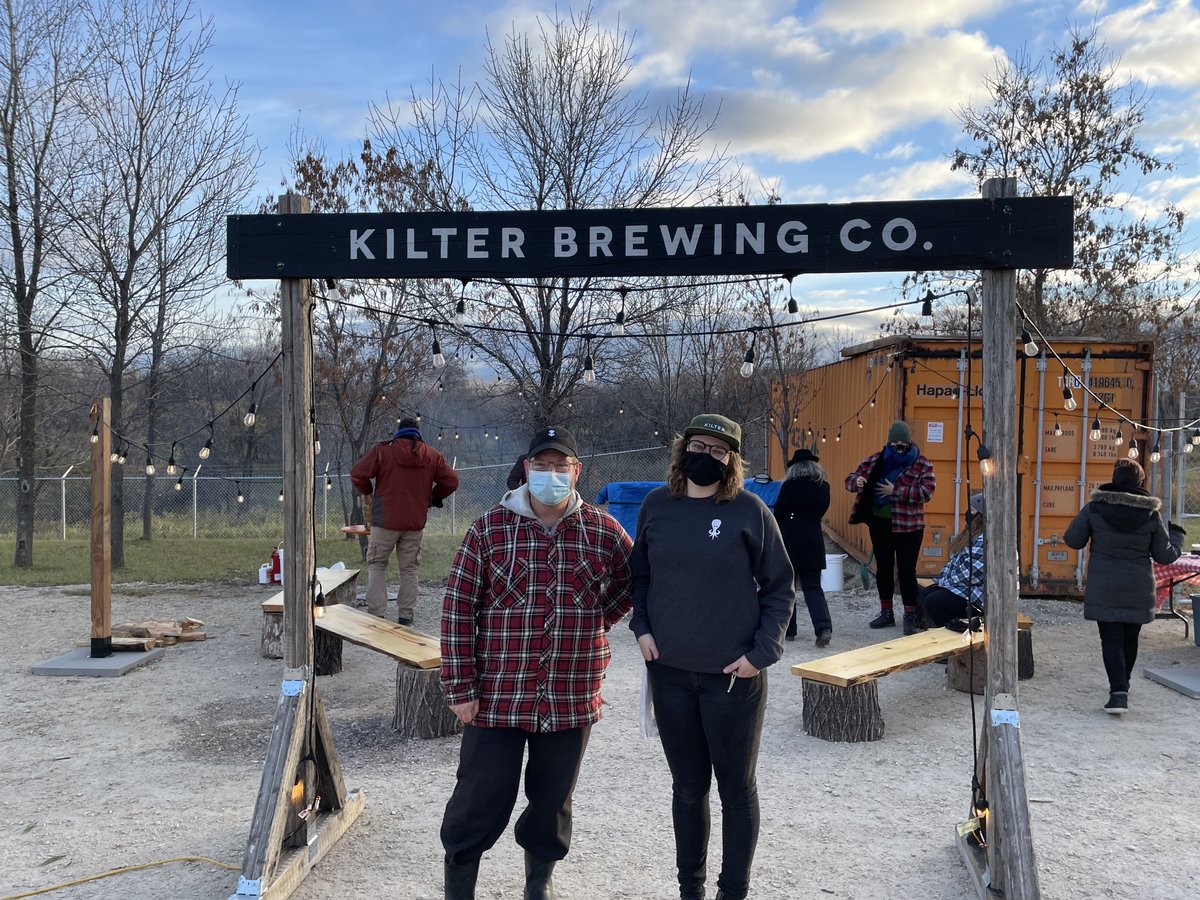 As a combo, beers and bonfires are generally an easy sell.

Add to this concept of learning how to make beer over said bonfire, while being served beers that were literally brewed right behind you along with a healthy serving of prairie brewing history—well, take my money.

The  Camp Kilter Open Fire Brewing Experience is all that and more, with the "more" being a plate of campfire cuisine after an open-fire cooking demo, a fun little foraging session along the Seine River and the option to bring the specialty saisons and stouts you've just been drinking home with you.

It’s a partnership of sorts between Kilter Brewing and Barrett Miller, the latter of whom is the incredibly knowledgeable Tourism and Custom Programs Coordinator at FortWhyte Alive.

Miller has been hosting Campfire Brewing sessions at FortWhyte Alive since 2019. He got into the practice after being handed original brewing field notes from the first brewer they know of in the region.

“The first professional brewer in the Red River Valley was a Hudson Bay Company employee who was trained in modern industrial methods in the 1860s and was brought here and plunked down on the prairies,” said Miller, as he’s about to open a massive pot of boiling water on the campfire.

“He no longer had any modern conveniences…No thermometers or hydrometers or anything he’d learned to make beer using. So he had to learn a few tricks. One of them was, "If you can’t see your face from the steam coming out of the kettle, then it’s the right temperature to put the malt in,” continues Miller, as a steam bath envelopes his face.

The whole experience is full of fun moments like this, as Miller regales the group (who are sitting on benches around the fire) with historic anecdotes while showing step-by-step how beer can be brewed outdoors.

You’ll see all the ingredients—the malt, barley and hops—before they go in, tasting them (the pilsner barley has a wonderful nutty flavour like bran; the Columbus hops, which Miller has sourced from his own backyard, you just smell, as it would overwhelm your palate) before they head for a steep.

You’ll learn about one of St. Boniface’s most notable streets, Des Meurons (just a block west of the brewery) and how its name came from European mercenaries during the Napoleonic wars. Indeed, the farmhouse ale Miller brews is based on an anecdotal recipe of sorts from a 180-year-old journal from Des Meurons soldiers. Miller developed it by working with Miguel Cloutier, the head brewmaster and co-owner of Kilter Brewing, based off what would have been available at the time, along with new herbaceous touches like pineapple weed.

While all this is going on, the good people of Kilter—in this case taproom manager Sara McDonald, a wine expert with plenty of experience in Europe—pours you some of Kilter’s most prized beers. For us, this included two Flora Field Saisons, one made with foraged rhubarb and the other foraged spruce tips that reflect what Miller is creating over the fire. McDonald also shows you how to make a bonfire blue cheese béchamel, a version of which appears later on our dinner plate that includes brats with pineapple salsa and a baked potato.

As to foraging, you learn plenty of tidbits right outside of the brewery’s fence, which is just steps from the banks of the Seine. You’ll discover how beer can be made with Manitoba maple water, how acidity can be introduced using rose hips and how roasted dandelion root can create a "chocolate" porter, all while the beer boils away on the fire.

Do you get to drink the campfire brew? Well, no, as Barrett still needs to let the ale yeasts do its thing after he kettles it (which he does here too) before letting it rest and meld in bottles for a few weeks. Altogether, this beer would be ready for consumption in around five weeks, while its saison-like flavour will continue to evolve with aging.

Your bonfire experience ends with s'mores (paired with Kilter’s S’mores Scout S’mores Stout, of course), along with a behind-the-scenes look at Kilter’s brewing process. Plus, you get a pretty sweet field manual to take home that contains the beer recipe, along with campfire cooking recipes using Kilter beers and notes on wild, local ingredients.

The final Camp Kilter session of this season is already sold out (it goes down this Sunday, Nov 7; tickets are $80), but the brewery and Miller (along with support from CDEM) plan to host more in the spring.

In the meantime, do yourself a favour and go spend some time in Kilter Brewing.

They have a huge, stylish tap room that you’ll wish your living room looked like, along with a selection of beers that cater to all tastes. This includes their flagship Juicii IPA and Waves pale ale for fans of hops and citrus, and the “Terra” Field Saison (made with that  aforementioned pineapple weed that was picked right behind the brewery), one of our new favourte beers in the city. (Slick merch too—if anyone is looking for Christmas gifts, we’ll take a Dad Hat in black).

Kilter’s taproom also just released a new food menu that is all about Italian-style deli sandwiches, including a meatball sub, a cold cut combo and a spicy veg with marinated eggplant and chèvre.

Kilter Brewing is located at 450 Rue Deschambault. The new taproom hours are Wednesday & Thursday noon to 10 p.m; Friday &  Saturday noon to 11 p.m; Sundays from 1 to 6 p.m.