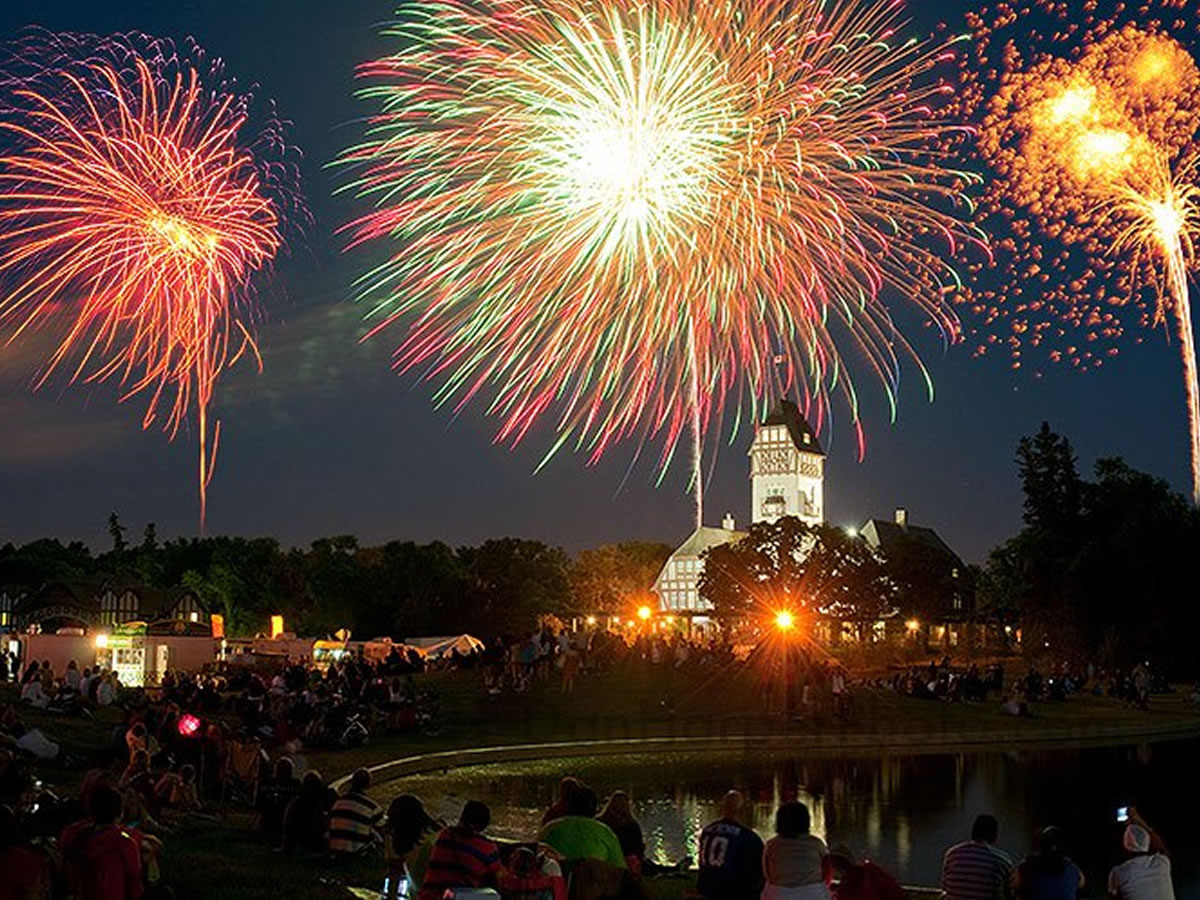 Winnipeggers are one patriotic bunch. We fly our flags, wear t-shirts, baseball caps—you name it—emblazoned with a maple leaf and proudly belt out Canada's national anthem when the mood strikes. And come Canada Day on July 1, we become a pack of rabid nationalists celebrating our country's birthday at events all over the city. I was having trouble deciding what fantastic party to partake in for 2014. So I decided to squeeze a bunch in instead. At 9 a.m. I'm starting at the Canadian Museum for Human Rights for the 2014 edition of the Canada Day Living Flag. The first 2,000 of us will get special red and white t-shirts from Downtown Winnipeg BIZ. By 11 a.m. we'll all line up to create a living Canadian flag and get our picture taken from above. 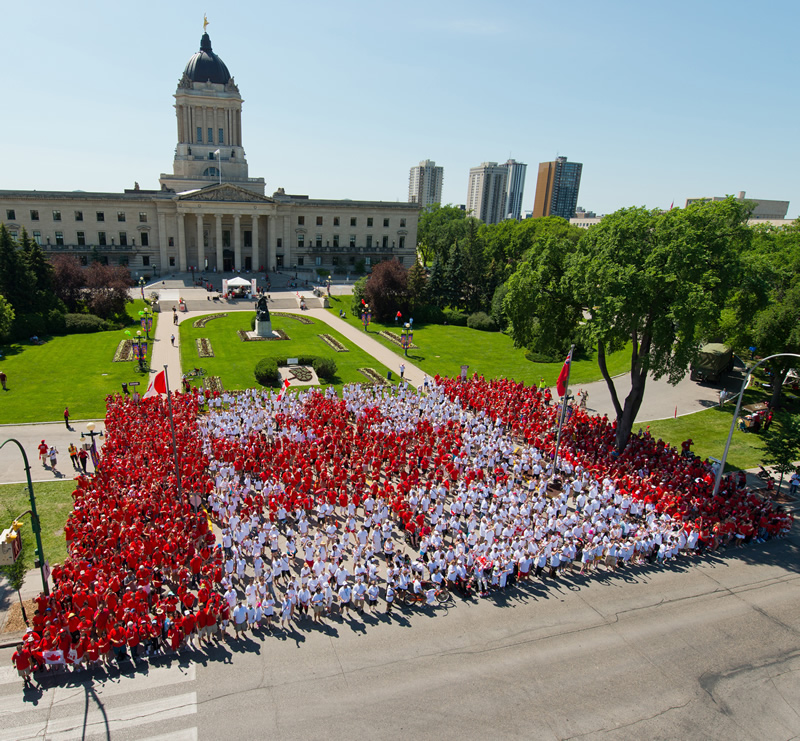 Living Flag on Canada Day 2012 at the Manitoba Legislative Buildling

And when the photo shoot wraps up, it's time to walk over to The Forks, which has unofficially become Canada Day central. This year's 10-hour party features buskers, performances by the Canada's Royal Winnipeg Ballet, and the Winnipeg Symphony Orchestra and live music on three stages. The party starts at noon.

Later, it's over to Osborne Village, one of Winnipeg's most vibrant neighbourhoods, to take in one heck of a street festival. Live music, beer gardens, buskers, face-painting, art, street food and a market make this party a must-see every year. 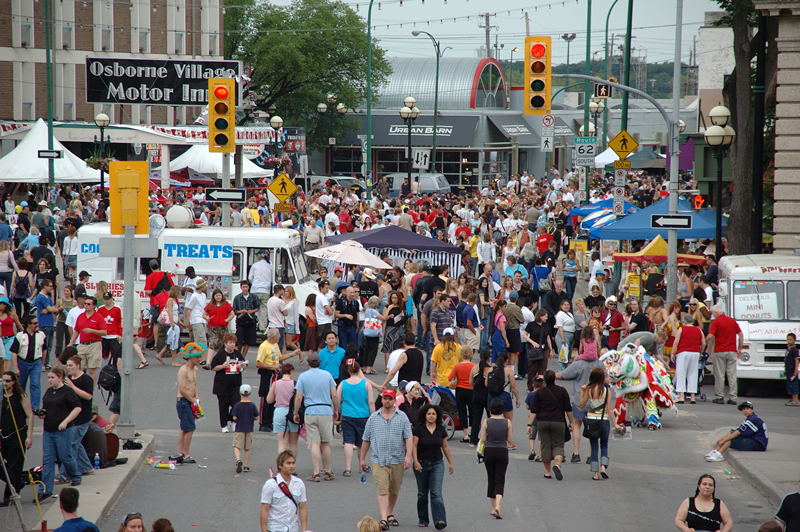 For a family-friendly vibe, head over to Assiniboine Park for day-long celebrations, including loads of kids activities, and live entertainment on The Lyric Stage. At 2:30 p.m., watch new Canadians take their citizenship oath (it's quite joyous and emotionally moving to witness.) Tourism Winnipeg will be there during the day with a booth, so stop by and say hi! 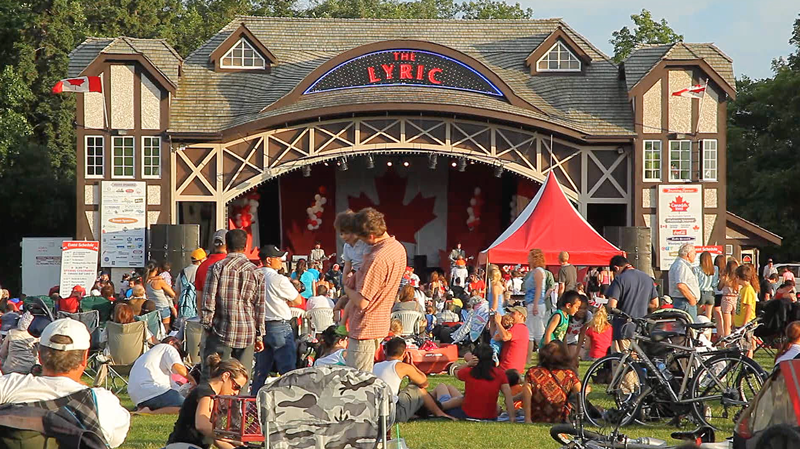 When the day fun is done, it's time to wrap up Canada Day with fireworks. There are two great spots for fireworks shows: The Forks and Assiniboine Park. Tip: find your fireworks spot early. We locals, numbering in the thousands, stream to both areas to seek out the best vantage point. The first shell fires at 10:40 p.m. at Assiniboine Park and at 11 p.m. at The Forks. 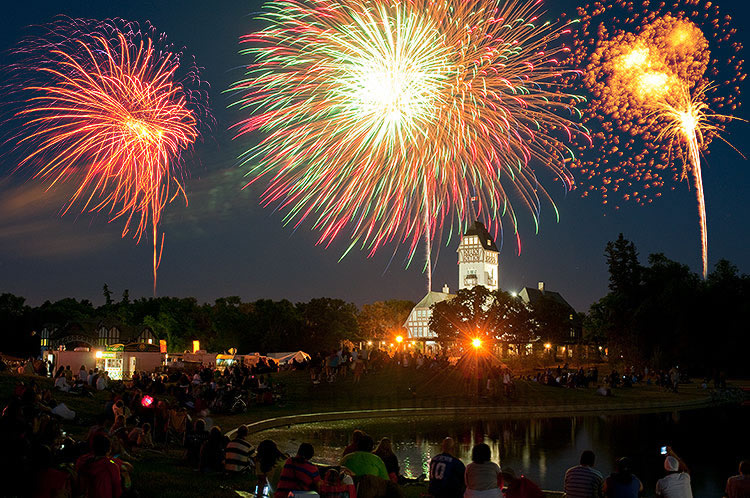 That's my plan, but frankly, there are so many more outstanding Canada Day celebrations to check out too. Here are a few more of my favourites: Oak Hammock Marsh wildlife and interpretive centre just north of Winnipeg marks Canada's birthday with face painting, games and quizzes, horse-drawn carriage rides and free cupcakes. The Royal Canadian Mint also gets in on the action with a day-long party. The action includes: an outdoor concert, a show and shine featuring drag racers from the Manitoba Drag Racing Association, a barbecue ("priced to please") by Danny's Whole Hog, free tours of the mint, and loads of fun for kids. The festivities run from 9 a.m. to 5 p.m. In Saint Boniface, Winnipeg's French Quarter, buskers invade the east plaza on the Esplanade Riel. Promenade Café and Wine host a party in its parking lot, which looks onto the Red River and The Forks. Fort Gibraltar also hosts a family-friendly party with costumed interpreters, artisan demonstrations, and plays. Admission is free. An 18th-century military camp springs up at Laverendrye Park. Learn about the history of exploration in Western Canada and fur trading there. And expect demonstrations on "things that go boom." There are also special events at Le Musée du Saint-Boniface and La Maison Gabrielle Roy. With all that's happening in Winnipeg, you're guaranteed a Happy Canada Day.