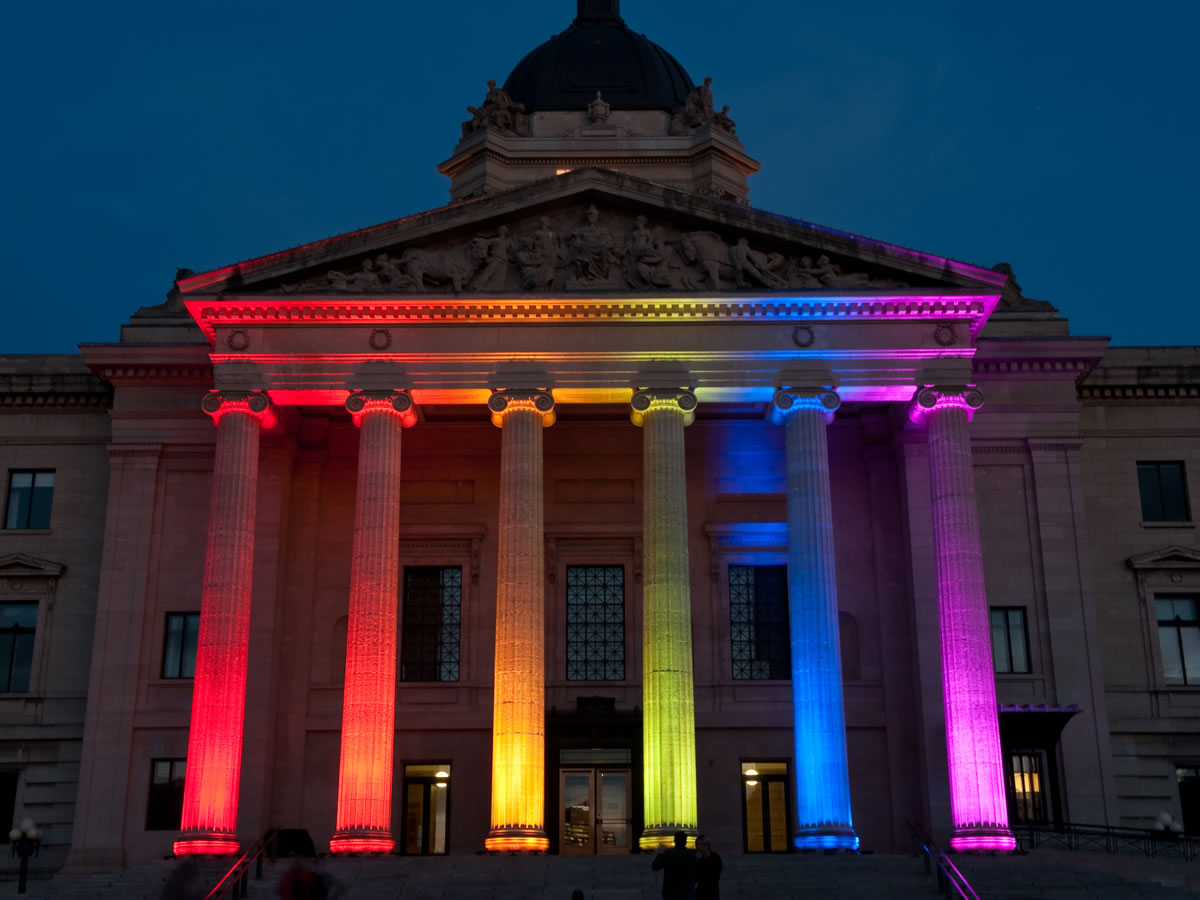 Pride of the Prairies

Pride of the Prairies

It's time to get in the spirit: the 2014 Pride Winnipeg Festival kicks off this Friday, May 23, and has been extended by two whole days this year, taking it all the way to June 1. I adore Pride. The fact that we live in a city where everyone gets to openly be whoever they are is a pretty fantastic thing, and it's something worth celebrating. Thankfully, the celebrations will be absolutely everywhere, in every shape and form, and it'll be near-impossible not to get be infected by the positive energy flooding throughout the city.

For the already acquainted, you'll know the deal. And like me, you're probably pulling the most outrageous costumes you can find out of your wardrobe in preparation. But if this is your first Pride, let me give you a few tips on how to get the most out of the festival. A bit of background info: the whole purpose of the Pride Winnipeg Festival is to provide an opportunity for gay, lesbian, bisexual and transgendered persons and their allies to celebrate their culture, heritage, and diversity. The festival celebrates and showcases the diversity of the LGBTTQ community in and around Winnipeg, and has grown from a one-day event to a giant festival filled with fun, colour, music, laughter, optimism and activism. Over 30,000 attend the Pride Winnipeg Festival—we're one of the largest celebrations of LGBTTQ culture between Vancouver and Toronto! And what better place to celebrate Pride than with our incredibly welcoming community in the heart of the continent.

Each year has a theme, and this year, it's WITHOUT BORDERS, inviting everyone into the overarching theme of Pride itself: that we should be unashamed of who we are, and to march proudly. The festival's themes are always great reminders and calls to action, but I love this year's particularly because it truly encourages people to participate in creating a world without borders; not just in a personal sense, for the freedom of expression without barriers, but in a global sense for equality for all. One of the beautiful things about Pride is that no-one is out to judge anyone else. Whatever you identify with, embrace it proudly and take it to the streets: everyone else will be doing the exact same thing. If you want to wear a wild costume, sport neon spandex, or just dance around the streets in your pants, nobody will raise an eyebrow. You'll probably even make some new friends if you do. 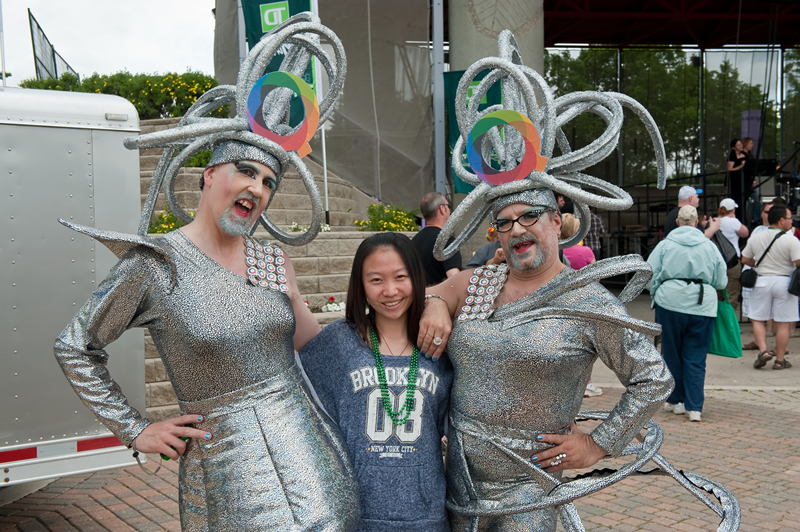 So, onto the events! The Pride Winnipeg Forks Festival will feature performing artists, local vendors, and children's entertainment, and will be expanded to operate on Saturday and Sunday, too. Oh, and don't forget about the Queer Beer Tent (local beer heroes Half Pints have crafted a special brew once again just for the occasion, and it's fantastic. It's also available at all MLCC locations for a limited time)—this year it's received an expansion as well as an upgrade.

The week boasts more fun community events than I could list, but a few I'm looking forward to are the official rainbow flag-raising ceremony at City Hall on Friday (12:15), where you can take your lunch break and watch the colours fly over downtown. We'll be taking 'Lil Peg out to Everybody Dance Now on Saturday the 24th, an afternoon dance party/variety show geared toward families (yep, you'll need a young'n to get in!) at the Royal Canadian Legion on Sargent. Sunday, the Mister is off to the Pride Pool Tournament at Club 200, and later that night we'll be heading to the Pride Vigil at the Manitoba Legislative Grounds (note: if you're joining us, please don't bring wax candles). Amidst the festivities, I think it's important t to join together and remember and commemorate those who've dedicated and lost their lives in the struggle for equal rights. 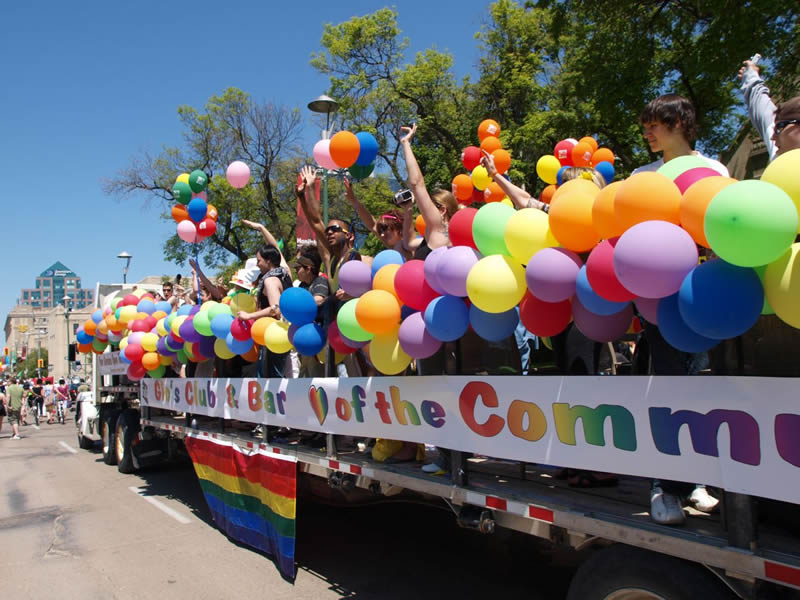 During the week, there'll be something for everyone: from cabarets to documentary screenings to coffee houses to lube wrestling—as well as roller derby, cocktails under the stars, pancake breakfasts, and a Beyonce (woot Winnipeg!) themed BOW DOWN party all the way from Montreal. The festival will culminate in the exhilarating official dance party, In Flight, where the Metropolitan "Airport" downtown will become your check-in destination for fun. Costumes are encouraged; from pilots to flight attendants, ramp workers to baggage handlers... just leave your baggage at home so you can enjoy the party! For a complete list of events, check the website here.

And if you're free and want to be part of a team committed to a great festival (as well as engage with the community, meet new people, show your commitment to a cause, and have a bunch of fun), Pride can always use great people to volunteer. If you're interested, click here for more information!

Pride is an amazing celebration of inclusion, equality, and freedom of expression. I always remember the words of a good friend of mine after we attended an LGBT event a few years ago: "As with every civil rights and equality issue, it’s only when the many come together that we achieve the power of one. There are no women’s rights, gay rights, ethnic minority rights or religious rights… there are only human rights.”

Hear, hear. Come on out Winnipeg, and celebrate progress, diversity, and equality in some of the funnest ways imaginable!