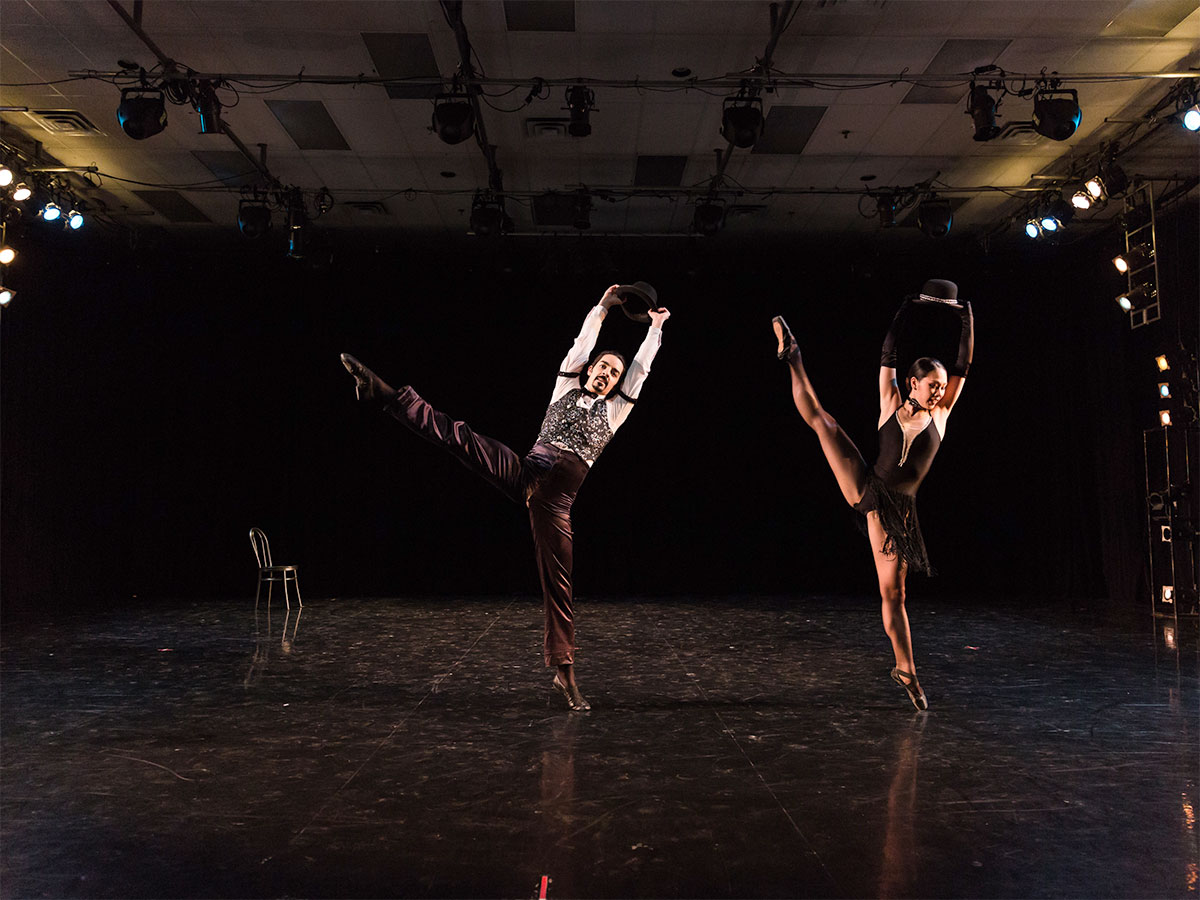 Winnipeg’s dance community continues to shine, with strong performances to kick off 2019

Winnipeg has never been, and never will be, confused with the fictional town of Bomont (setting for the iconic 1984 film, Footloose). Our city loves dancing – whether during a social with a cold cut sandwich in one hand, a sweltering summer night of salsa under the canopy at The Forks, or the world tour of Folklorama, with dozens of dance styles on display. With all that toe-tapping, it’s no wonder that the city’s artistic dance community has found a natural home in Winnipeg.

To learn more about the city’s dance culture, Tourism Winnipeg sat down with two artists with upcoming performances: Rachelle Bourget, whose contemporary solo work AFTER THE CAUSE is running January 31 – February 2, and Stephan Azulay, corps de ballet at the Royal Winnipeg Ballet, who will be performing as Romeo (second cast) in the upcoming Romeo & Juliet (Feb. 13-17). We asked them about their upcoming shows, their interactions with Winnipeg’s dance community, and why they choose to display their talents in The Peg. 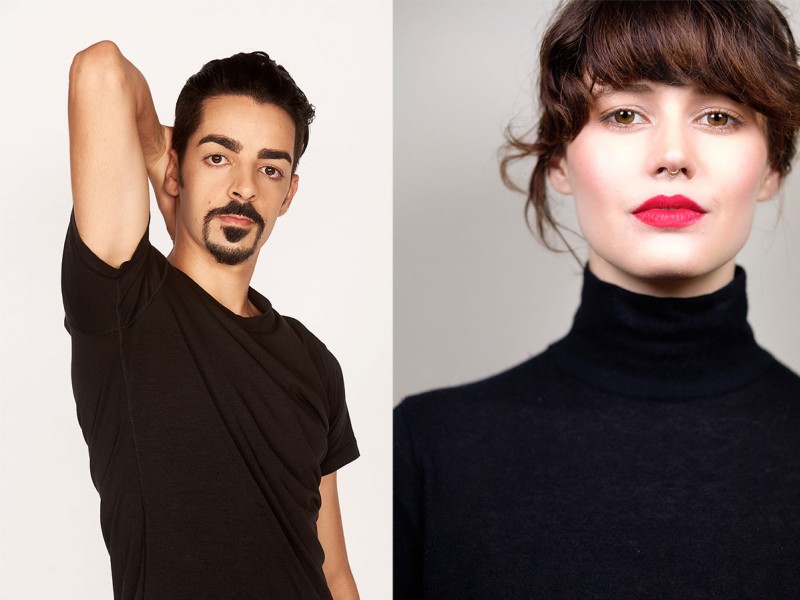 What can you share about your respective upcoming shows?

RB: I’ve been working on this piece for three or four years now. I feel like AFTER THE CAUSE is morphing ideas and images, rather than a linear story. People are always looking to escape something in their realities, to be something or someone different. I wanted to investigate why that was happening – for me, and for others. I knew I wasn’t alone in this feeling, and wanted to learn more about how people were using darkness as a mask.

SA: Everyone knows Romeo & Juliet. What we’re offering is an artistic interpretation of that story. Our job is to do the steps, but it's also to interpret the story and music, and that's where the magic happens. What’s different with each version is the choreography. The RWB’s version is by Rudi van Dantzig, and we’re one of two companies in the world that performs this version. So that’s pretty unique.

How do you prepare for your performance?

SA: I'm completely new to this production, and new to my specific character. Every ballet company has different versions of all the classic ballets, and I needed to learn this version. The first chunk of rehearsal time is all brain. We tried to learn the pas de deux as fast as we could, because they're technically the hardest. Just recently, we worked on all of our partnering to get the sequence and to work on stamina. After that, we will start doing run-throughs, so we can get continuity. And then before you know it, we're in the theater.

RB: Contemporary art is fascinating, because both artists and audience are coming in with their own perspectives. I’m still figuring out my creative process – I’ve learned the importance of structure, and spending time on something and focusing in on specifics. This process has been really diving into the exploration of movement, and how it grows and evolves. It was great to jump back into AFTER THE CAUSE after the 2017 Fringe, and take a fresh look at the movements.

Is this an exciting time to be part of Winnipeg’s dance community?

RB: I think Winnipeg is pretty open to seeing new things. The city is at an interesting precipice – if you want to see different artistic things, it exists here. You just need to find your audience, and that audience is growing for more and more shows.

Since 2017, I’ve been collaborating with Happy/Accidents toward remounting my solo work AFTER THE CAUSE as a full length work... and it’s finally here! Please join us at the Rachel Browne Theatre, 8 pm from January 31st - February 2nd 2019 $22 regular and $18 artist/student/senior I feel so fortunate to be able to dive back into this work, researching and rehearsing tirelessly with @jason.martin.3152 - who has kept me going, and without his direction and dedication, this piece would never have reached this highest level. I can’t wait to show you this evolution!✨ Reserve your tickets at happyaccidentstheatre@gmail.com before they’re gone!

Winnipeg is a city that loves collaboration. Everybody is working together to make their thing happen, and a majority of my professional career has been collaborating with other artists. The community is so supportive, and a few pillars that raises everyone up. The community wants to grow and share more ideas and emotions. There’s a lot of support here, and that’s something I love about this city.

SA: The support's pretty amazing. Every time I tell someone that we're doing Romeo & Juliet, they get really excited about it – which is really nice and heartwarming.

In terms of support inside RWB, it's incredible the amount that we help each other. Because we're a pretty small company for the size of productions we do, we have to be there for each other. We do pretty big productions, considering the size of the company itself. If I don't know a certain section, someone will teach me. If I want to go over something, someone that's not even doing that part will jump up and help me do a sword fight, for example. It's a very supportive group of individuals.

What do you appreciate about Winnipeg’s dance community?

SA: I’ve had a crazy journey to get here, from London, Munich, Sydney, Melbourne, New York, and Las Vegas – and now I’m in my second season in this city. I knew there was a good company in Winnipeg with the RWB. It's the oldest continually running ballet company in North America, so it's got a history and prestige. I enjoyed everything about the audition process here, and as soon as I saw the company, I knew this would be a good fit.

Winnipeg is a good city for many reasons. There's always so much going on, and things the city can cater to. Any spare time I have, I'm either doing something to do with the arts, or food. Anything art-related, I'll be there. I think Winnipeg is pretty lucky.

There was little a bit of everything this weekend. I started off Saturday with a killer massage from @llawrie , then I ate brunch on the river at @rawalmondwpg . After brunch I headed to celebrate Australia Day with some Aussies in Winnipeg at @kingsheadwpg and finished off the night at a free show at @greyowlcoffeeandpub . Today I went and got some tacos at @bmcmarket_taqueria and then worked on my taxes at @lilsistercoffee south. What a weekend and it’s not even over yet...

RB: I split my time between Montreal and Winnipeg currently, and there’s a lot to appreciate about both cities. There’s a lot of support in Winnipeg, and that’s something I love about this place. People want each other to grow, and there is a platform for that to happen here. For example, AFTER THE CAUSE received some assistance from the Young Lungs dance research exchange. This is an artist-run initiative in Winnipeg that allows artists to work on an idea. They give them the space and funds to do that over a period of 3 months, to explore an idea. That opportunity doesn’t exist everywhere, and it was so helpful to be able to dedicate time towards this show.

What can audiences expect with your upcoming performances?

RB: Come and see a work that’s a bit challenging, has some elements of confrontation but also vulnerability, and feel something that maybe you’ve felt before. This piece really dives into the exploration of movement, and how it grows and evolves.

AFTER THE CAUSE runs Jan. 30 – Feb. 2, with tickets available at the door of Rachel Browne Theatre, or by emailing happyaccidentstheatre@gmail.com.