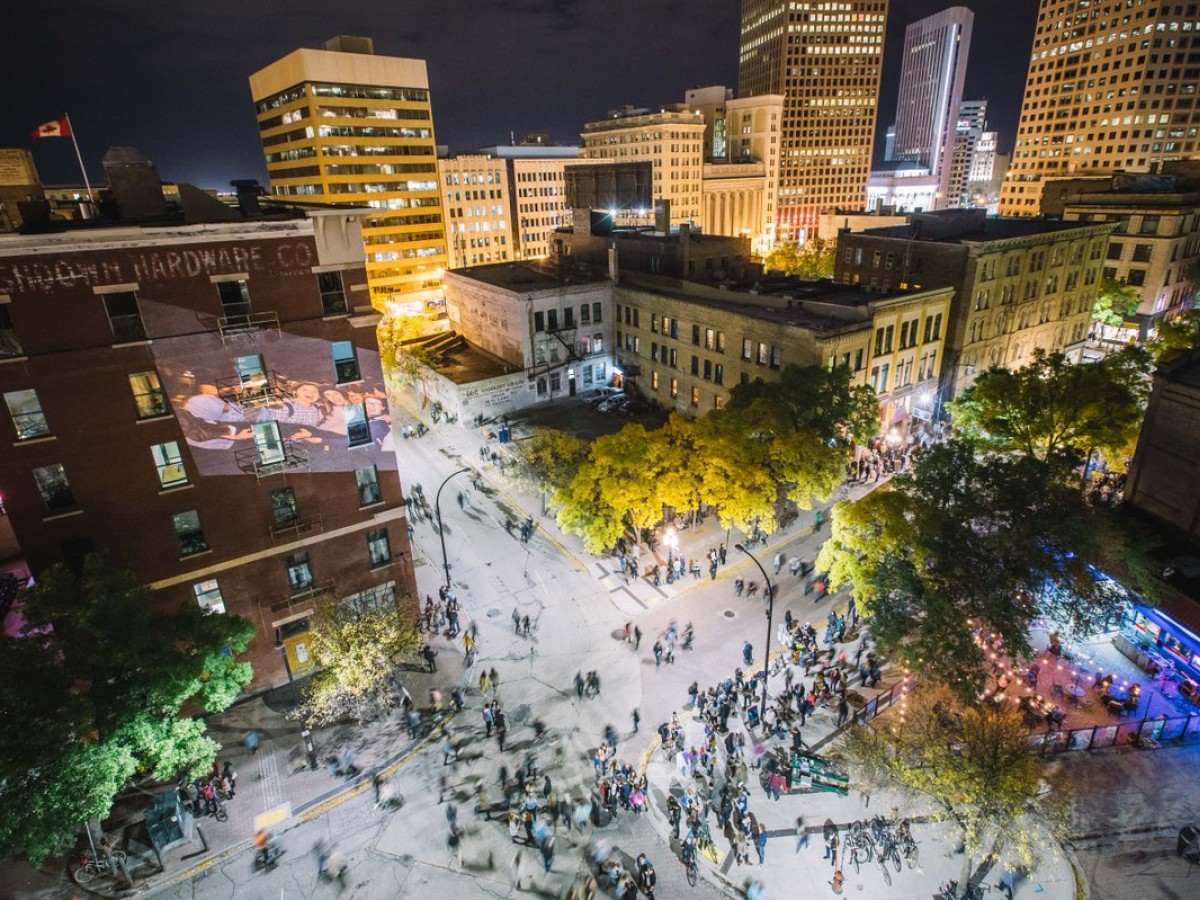 Why Nuit Blanche Winnipeg 2018 will be so rad

Just check out all these installations, then ready yourself for the most innovative evening in the city

From 6 p.m. until 2 a.m. throughout downtown (which includes so much cool stuff at The Forks), the West End, the Exchange District and St. Boniface you can join an estimated 25,000 people who will be witnessing – and indeed interacting with – far out art installations, reveling at parties and happenings, and just generally having a fabulous time at over 90 creative events – all of which are free!

It’s called Nuit Blanche, and it marks the apex of Culture Days (September 28, 29, 30), which in their own words is “a collaborative Canadian volunteer movement that aims to raise the access, awareness, engagement and participation of all Canadians in the arts and cultural life of their communities.”

Moon (Picnic) II by Melany Nugent-Noble @cherub_mogwai includes a large, spherical, illuminated moon, and a fog machine and the installation will be activated with performances throughout the night. . . . The public is encouraged to bring gently used blankets to activate and define the space and leave behind as a donation for a local charity, @mainstreetproject , that serves the needs of Winnipeg’s most vulnerable residents. . . . Attendees are encouraged to interact, perform and activate the installation throughout the evening, in-between scheduled programming. . . . Moon (Picnic) II is an Illuminate The Night project of #nbwpg presented by our Major Partner @theforkswinnipeg . . . WHERE @theforkswinnipeg #meetmeattheforks

And while we could go on waxing poetically on the creativity you'll encounter during this all-night celebration, we thought it best to simply showcase a few of the amazing installations and events that will be gracing our city streets for a few days (along with the markets and happenings that will be, well happening, around these works).

But before we do, let’s give a big shout out to producing partner, the Winnipeg Arts Council, who are funding all these pieces and so many of the events.

As well, we should also note that large parts of the Exchange District – which has become the most-popular Nuit Blanche area – will be like one large playground for adults, while there will also be an Art Market by LUCKYGIRL Pop Up surrounding Old Market Square.

Check out this number by Colombian-born, Montreal based artist Daniel Iregui.

This large monolith of an LED sculpture will have constantly moving patterns, replete with sound, which people can alter by touching its surface. As they state in the press release, “as people explore different gestures and how the sculpture reacts to them, one can question - who is controlling who?”

You can attempt to take control in Bijou Park in the Exchange District.

Who doesn’t like a seesaw (or teeter-totter), especially one that is this lit? (Lit here being both figuratively and literally). Produced by Quartier des Spectacles (Montreal) and created by Lateral Office (Toronto) and CS Design, Impulse’s seesaws illuminate and create sounds when people play on them. It will be set up in Old Market Square from September 29 to October 3.

So many of the 90+ events that you can attend during the night also have cool installations. One, which you can find in Millennium Library Park, is Hand of the Machine by Winnipeg’s own Solmund MacPherson. As the title indicates, this will indeed be a massive mechanical hand that you (and even better, a group) can engage with.

Another cool one at The Forks (at the landing of the Esplanade Riel), is RUN FOR YOUR LITE, by Winnipeg’s Cloverage Forge and Wood Anchor. When in use this human-sized hamster wheel will actually pump the bellows of the blacksmith forges so a blacksmith can start striking. Needless to say, this wheel is hot stuff.

Also located at The Forks will be Moon (Picnic) II by Kelowna’s Melany Nugent-Noble. This installation features an illuminated moon and fog machine that can be activated both by various performers during the evening and by the general public.

More made in Winnipeg magic will be found in St. Boniface, including one reel cool event that is a bicycle drive-In movie. Created by Neil McArthur (Winnipeg) and Alanna Thain (Montreal), The St Boniface Drive-In Movie Theatre will be situated right alongside the Red River in Parc Joseph Royal and will play short films by local and Quebec filmmakers which you can watch from the seat of your bicyclette.

Speaking of bikes, one of Nuit Blanche’s biggest annual events is The Bike Jam, which will take place from 9 p.m. to 1 a.m. starting at the corner of Main and Sutherland.

Bikes are of course a great way to cover a lot of ground during Nuit Blanche, while you can also get free trolley service throughout the evening via the Winnipeg Trolley Company (sponsored by the Exchange District Biz) which will be traversing between zones around the city.

To learn more about this incredible evening go to the source: nuitblanchewinnipeg.ca