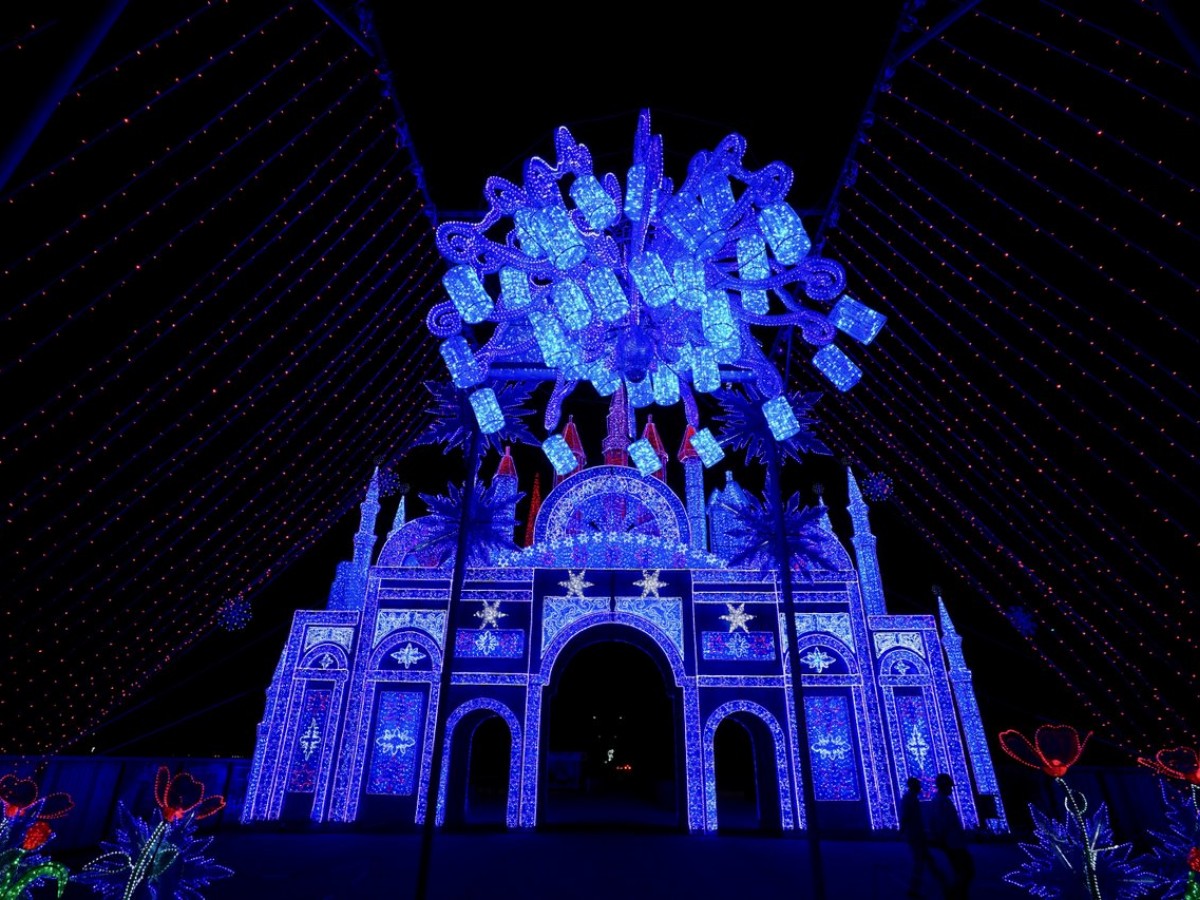 As the kids say, this brand new $4 million exhibition is lit.

Spread out over 10 acres at Red River Exhibition Park, the Lights of the North Lantern Festival celebrates the 30th anniversary of the twinning of Winnipeg with its Chinese sister city, Chengdu, utilizing an incredible array of light displays.

This is evident as soon as you approach the RREX grounds, as your eyes are immediately drawn to an illuminated version (we’d say miniature, but it is actually over two stories high), of Winnipeg’s Canadian Museum for Human Rights, along with a staggering number of displays which include the Manitoba Legislative Building, a castle like structure that doubles as an entrance way, and all manner of mammoth light displays.

When walking the grounds you’ll encounter a dragon that is over 200 ft. long, composed of over 100,000 plates, saucers and wonton spoons, along with a polar bear bearing over 30,000 ping pong balls which two artists have just spent over two weeks placing individually.

Nearly 100 Chinese artists have been employed to create all these huge displays, which also includes a section filled with life-sized dinosaurs (replete with rubber skin that feels so reptilian) – including a dino maze whose walls are composed of Chinese lanterns – that kids will relish.

Altogether, there are over 50 lantern displays, the majority of which tower overhead.

On top of that, there’s a stage where you can catch some breathtaking acrobatic displays (nightly, beginning at 6:30 p.m. on weekdays; 5 p.m. on weekends).

During last night’s sneak preview, we witness one performance where two male gymnasts seemingly defied the laws of gravity and grip strength, holding each other up at angles that would surely have snapped our forearms. There was one performance from a female acrobat that involved juggling everything but the kitchen sink with her feet (the spinning and flipping of a table was particularly impressive), along with a clown like act that involved blowing fire and the flipping through of a great deal of masks.

Be sure to bring your appetite, as they have also brought in chefs from Chengdu who are serving both spicy Sichuan fare, chuànchuànxiāng (skewered meats and vegetables dipped in hot pot), and dandan noodles. Plus, there are several food trucks from Winnipeg – including Kyu Grill – to round out your dining options.

There’s also plenty of gifts and artsy items to be had, as Lights of the North has also brought in over 50 artisans from China who will be working onsite throughout its run.

We’d tell you more, but we feel as though the pictures speak for themselves – while it’s also best to keep some surprises.

Lights of the North Chinese Lantern Festival is now open to the public. It will run until October 14. You can purchase tickets online (which will save you on the cost at the gates) here.