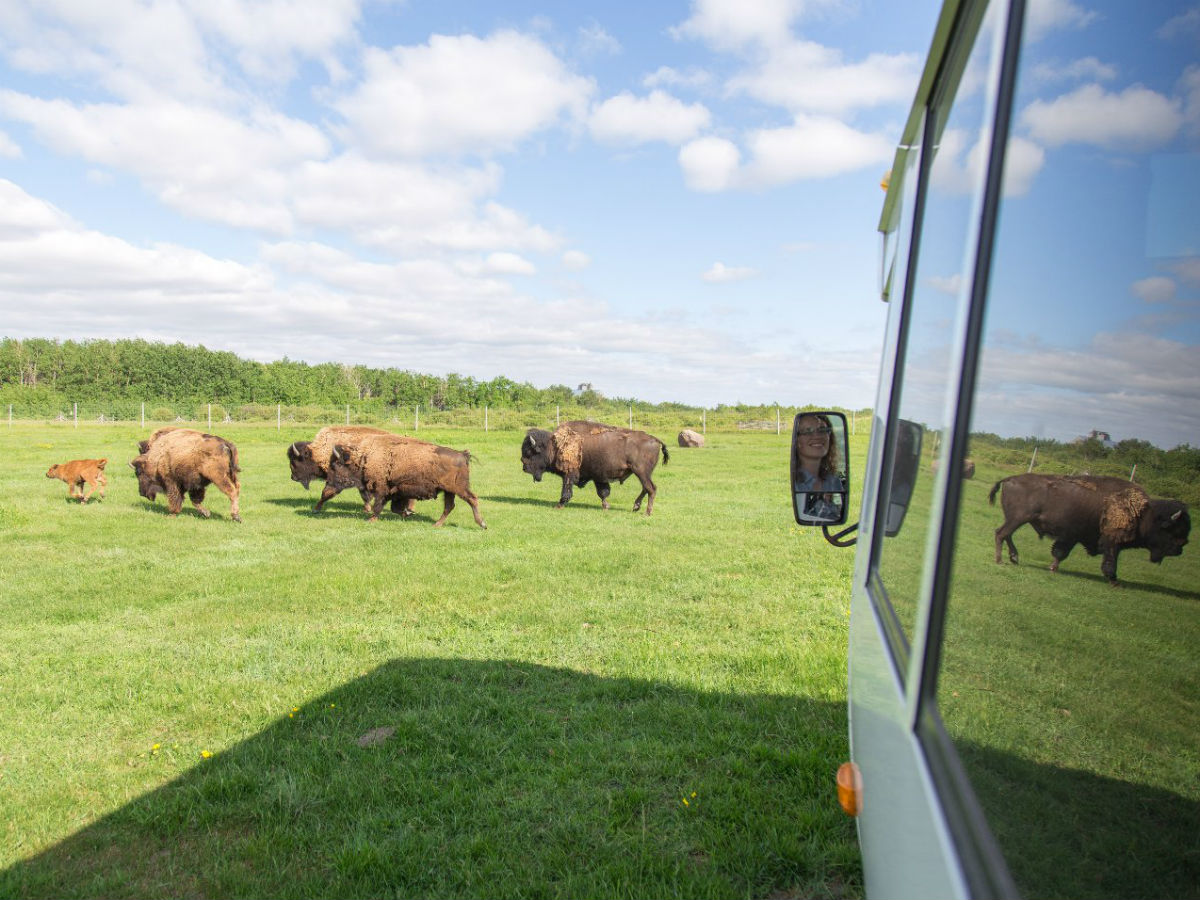 ... Along with paddle a canoe, launch an atlatl, and so much more!

Did you know that right within the city of Winnipeg you can encounter over 640 acres of pristine prairie, forests, lakes, a farm, wetlands and a mighty fine café – all in one spot?

It’s called FortWhyte Alive (FWA), and every day throughout summer there’s something going on here that is pure magic for all you budding biophiles (which is a fancy way of describing someone with a strong emotional attachment to nature – which really should be everyone, right?).

For starters, there’s the Canadian Signature Experience, A Prairie Legacy: The Bison and Its People, which will immerse you in the full FortWhyte experience, all while lending insights as to what it was like on the prairies for the area’s Indigenous peoples.

This three-hour experience takes you all over FWA’s grounds, from tipis on the plains, to the lakes on huge voyageur canoes, to sitting around a fire baking bannock on sticks over an open flame.

FWA is also home to North America’s largest urban bison herd (hence the tour’s name), and during A Prairie Legacy you’ll get close enough to these huge animals that you can hear them grunt. (In fact, did you know that bison are actually North America’s largest land animal, being heavier than both moose and polar bears. And, we should note here too, that you can also go on a one-hour FWA Bison Safari – more on that here).

Not only will get up-close to these behemoths, but you’ll also learn about how integral they were to the survival of the region’s Indigenous peoples. This happens within a Plains Cree Tipi, where a guide will unveil all the instruments and textiles that Indigenous peoples created using every bit of the bison (which you will get to handle), and how they hunted them using both horses (byway of creating a buffalo jump) and the atlatl.

And just what’s an atlatl? Well, you’ll not only learn that on the tour, but you’ll get to project one yourself on the tour. This device incorporates a spear that you launch via a slender wood guide, aiming for a large target which makes for great fun (and some friendly betting, if you want to egg your group on). Here’s a nice little guide on how to launch one to familiarize yourself with the process.

From there, it’s on to FWA’s Lake Devonian, where your group will climb into surely the largest canoes you’ve ever seen. While paddling around, your guide will highlight all the incredible flora and fauna – including up to 160 species of bird – that call this nature reserve home. Perhaps you’ll spy summer residents like the Cooper’s Hawk (“the sexiest of hawks” –  a moniker we may have just made up), a family of mallards, a hooded merganser (whose hairdos are second to none), or possibly even a few warblers, which our friend and noted ornithologist at Cornell University Dr. Dave Toews calls “nature’s singing Skittles” (because they come in almost all the colours of the rainbow!).

The experience wouldn’t be complete without a trip to the traditional sod house, where you can see just how tight the quarters were for the area’s first settlers. You’ll also take part in making – and drinking – wild bush tea, along with snacking on bannock topped with honey that you’ll bake right over a bonfire pit.

This incredible experience – which was also named one of Canada’s Top 40 Adventure Experiences – is just $45/person. Upcoming Tour Dates are July 17 & 31; and August 6, 25, & 28. Private tours are also available upon request.

On top of this Canadian Signature Experience, FWA has an embarrassment of riches when it comes to events this summer. Check out their  events calendar where you’ll see daily activities like Guided Fishing Evenings, Scavenger Hunts, Alive in the Woods, Nature Hikes, Hatchet Throwing, hands on fun and culinary activities at FortWhyte Farms, and so much more!