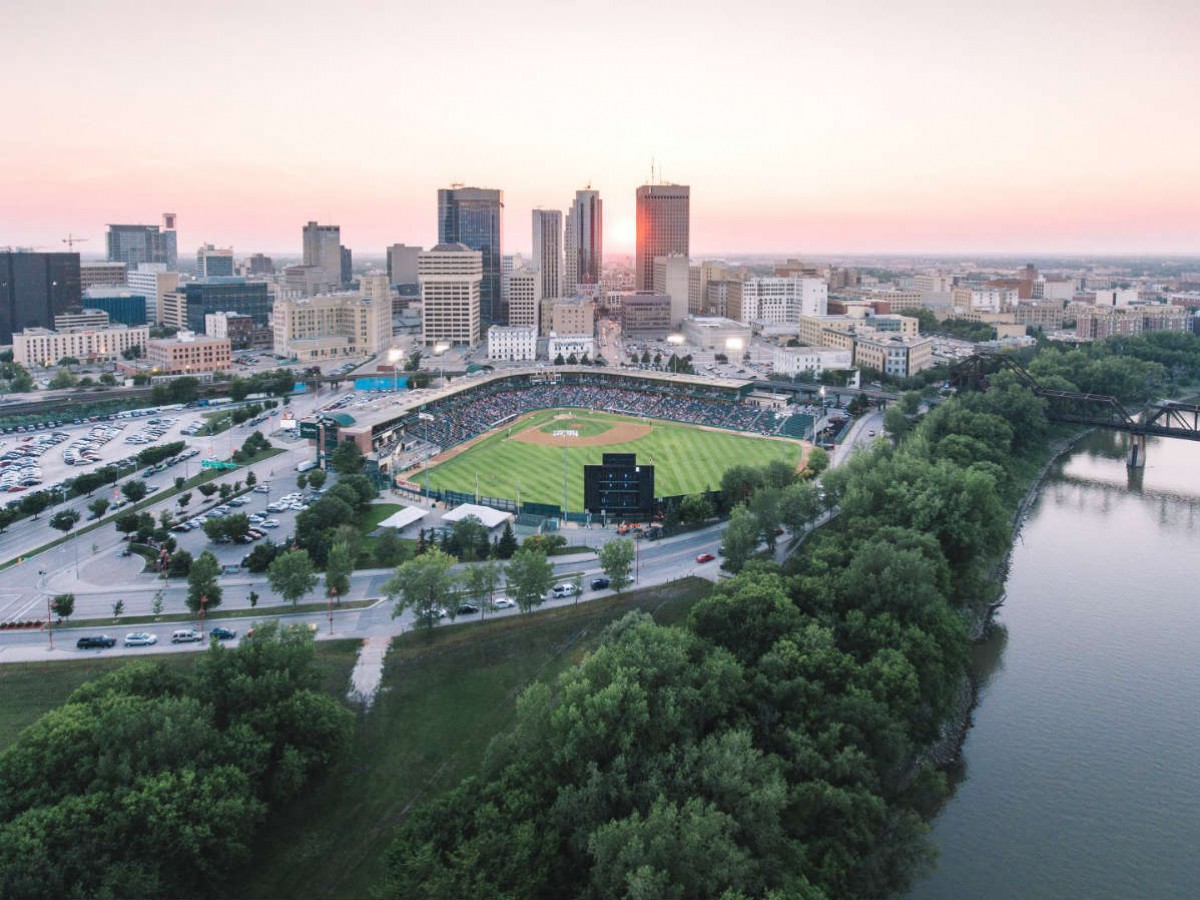 If it were up to us, the two-time defending American Association Champions Winnipeg Goldeyes would also be known as the seven-time* defending champions of ball park fun.

You see, Winnipeg baseball history aside, Goldeyes’ games are one of the best ways to spend a summer night (or afternoon for that matter) in Winnipeg, as The Fish always dish when it comes to good times.

For starters, Shaw Park is one of the jazziest little stadiums in all of baseball. It’s located right in the middle of downtown beside The Forks, and all 7,461 seats offer an impeccable view of the diamond – while you can also spy the Canadian Museum for Human Rights and the Esplanade Riel just over the outfield fence. In other words, you’re right in the midst of all action, with great options for pre-game dining and post-game drinks/entertainment etc., just steps from the stadium.

Not that you need to look anywhere else to dine before a game. Within Shaw Park you can enjoy excellent Indian cuisine from Clay Oven – whose whole dining room overlooks the ball park; tasty noodle boxes and global street food by Bodegoes; pulled pork from Danny’s Whole Hog; wings slathered in countless sauces and all manner of out-there stadium fare from Little Bones Wings; sushi and Korean fried chicken from Mooshiro; sweets from Morden’s of Winnipeg; and a mighty fine selection of cocktails, coolers, spirits and more. And that’s just a sampling.

In regards to those libations, new for 2018 is Shaw Park’s Craft Beer Corner, which shines a spotlight on some of the city’s best breweries throughout summer. This 1,400 sq. ft. deck with standup tables provides both an excellent space to watch the game, while patrons can sip from rotating taps that will include beers from One Great City Brewing Co., Little Brown Jug, Barn Hammer, Torque Brewing and Farmery Estate Brewing (depending on which game you attend), along with a permanent selection from Winnipeg’s original microbrewery – Half Pints – and a selection from Labatt. For the full schedule and selection available at games click here.

Nothing like baseball and beer. You can grab 1919 at the @wpg_goldeyes Craft Beer Corner. June 10-28. PLAY BALL! #honesty #quality #community #littlebrownjug

Outside of all the excellent amenities, The Fish are just a great team to watch.

They’ve won four league championships since joining the American Association – including a title in 2012 before these past two back-to-back championships (2016,2017) – while they also have saucy theme nights, like Ukrainian night, Country Night, Pajama Party Night, Zombie Night, Throw Thursday #90s and frequent usage of fireworks. Plus, they always seem to be giving away great stuff. Just check out this fabulous roster of upcoming theme nights.

And best of all, it’s affordable! #winnipeglovesabargain

Most tickets are just $14 ($11, + $3 for handling), while you can also buy group passes for even less. This makes it for a great night out to bring a group together, be it for a birthday (just $20 per person, which includes food and entertainment), a celebration, or any occasion you can think. On top of cheap group rates there are also several areas within Shaw Park where you can watch The Fish with your party all in one place. They have open-air patio decks and indoor/outdoor Skysuites, while you can also throw a massive get together for up to 1,000 people (options start at 50+ people) during a pre-game picnic, in the stunning Goldeyes Picnic Park.

We tell you, even if you are not a huge baseball fan, a Goldeyes game is a must-do on your Winnipeg summer itinerary. There are dozens of home games coming up throughout July and August and you’ll relish every minute you are in the stands hanging with Goldie and Goldette (the two mascots).

Reggie Abercrombie homers to move into second place in franchise history with 66 home runs, but the fell 6-3 in the series finale vs. @kctbones. • • • #GoGoldeyes

*We say seven, as they have only been incorporated in the American Association of Independent Professional Baseball since 2011, while we technically could make it 18-time champs, as they have been calling Shaw Park home since 1999.