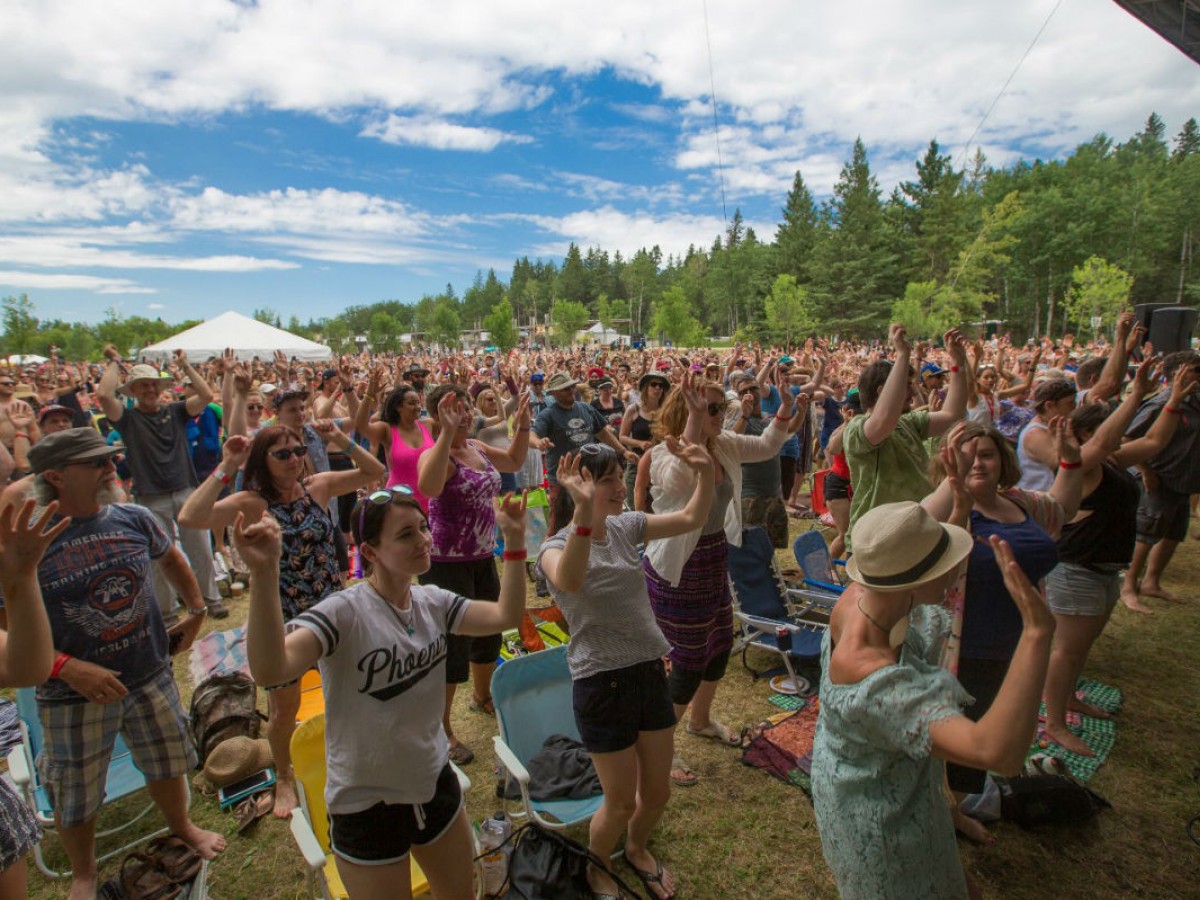 Can we get a show of hands from all of you that are #FolkFestHappy ? (photo by Joey Senft)

One of Canada’s – nay, the world’s – finest music festivals is celebrating 45 years this July!

And while that near half-century mark is a stunning achievement, it’s certainly not the only reason you should be getting your pass(es) for this summer’s Winnipeg Folk Festival (July 5-8, at Birds Hill Park).

(And please,  get those tickets asap! You can buy advance single day and four-day tickets until June 30 here, while festival camping passes are nearly sold-out. And get this, parents: kids 12 and under get in for FREE! – including camping).

For starters, how about this year’s incredible lineup! Headliners include Sheryl Crow, everyone’s favourite young Aussie Courtney Barnett (just watch the vid below for “Depreston”), Elle King, A Tribe Called Red, Strumbellas, John Butler Trio, and Bahamas, all of whom you can catch on the Main Stage between Thursday and Sunday night.

Performers that should be on your radar

That being said, there are so many other incredible performers that we’d like to take a moment to highlight.

Donovan Woods for example is about as fine of a singer/songwriter as they come. If you can listen to his song “Put on Cologne” and not be moved, you surely are a robot. Although, as a robot, we’d still invite you to attend Folk Fest because all that merriment you’ll witness will help rewire your circuit-based brain and perhaps foster some real human feelings. Anyway, you can catch Donovan Woods in workshops on Friday, Saturday and Sunday, along with a full performance on Saturday, July 7 at 3 p.m. at the Big Bluestem Stage.

Another gem you should not miss is Julien Baker. This ridiculously talented young performer released her first album, Sprained Ankle, at age 18 in 2015, to rave reviews from some of North America’s most astute media outlets. She’s got some pipes on her, while her songwriting style is intimate, making her performance on Sunday at July 8, on the Green Ash Stage one to see.

Another impressive vocalist who should be on your radar is Mike Milosh, who fronts the indie/R&B outfit Rhye. Indie radio listeners (along with Victoria Secret commercial enthusiasts) will immediately recognize Rhye’s 2013 single “Open” from their debut album “Woman” which has, as of this writing, amassed nearly 43 million views on YouTube. You can catch them laying out the slow jams Friday night, July 6 on the Big Blue stage at 10:30 p.m.

Of course, this is just a sampling of all the incredible performers that will grace the Folk Fest stages this year. For a more indepth audio/visual guide to some of the performers, check out our article from the launch here, where our staff picks some performances we are looking forward to from the likes of Mo Kenney, Too Many Zoos, Sidi Touré, and Darlingside.

Milestones like this deserve to be marked, and what better way to do it then with some sweet sounds honouring some of folk-rock’s biggest and best? Two special workshops, Jukebox ’74 and Celebrating 45 Years Stan Rogers Singalong (Friday at 11:30 a.m. at Spruce Hollow Stage and Saturday at 11:00 a.m. at Bur Oak Stage) will do just that, and will feature some blazing covers from some of this year’s best performers.

The Jukebox ’74 workshop will feature some of the biggest tunes of 1974 by the likes of Neil Young, Joni Mitchell and Tom Waits, all covered by artists including Micah Erenberg, Mick Flannery, Mo Kenney, Harrow Fair and We Banjo 3.

The Celebrating 45 Years Stan Rogers Singalong workshop will feature Nathan Rogers, son of folk music legend Stan Rogers, who will get the crowd singing along to his dad’s signature “Forty-Five Years.” Stan Rogers performed at the Winnipeg Folk Fest five times between 1975 and 1982, and was instrumental in the early years of the festival in helping create the culture that everyone relishes today.

ONLY 30 DAYS!!! What are you most excited for? #FolkFestHappy : @itsdarty

#FolkFestHappy (aka why this is such a magical experience)

Of course, one of the most amazing things about Folk Fest is simply the atmosphere and the energy in the air. While strolling around between stages during the day you’ll be absolutely charmed by the spectacle of it all. There will be children dancing in the grass as their parents bob their heads to the music, you’ll see free spirits with their feet in the mud dancing like no one is watching, and throughout the campsite and all around the festival you’ll see enchanting pieces of public art, along with countless vendors who are selling one of a kind and primarily locally made goods.

There is also tons of family stuff to be had as part of Folk Fest’s Art & Animation program within the Festival Campground. This includes a Big Games Tent, puppet shows, daily morning yoga sessions, and countless organized and impromptu jam sessions.

Attention Folkies! Get ready for a BIG group hug this summer... The Festival Campground is now 90% SOLD! If you haven't picked up those Festival Camping tickets yet get them now with Advanced pricing! Available in office at 203-211 Bannatyne Avenue or buy online through @frontgatetickets! #FolkFestHappy : @mattjsaw

The food is top notch, featuring a world of flavours from some of the city’s best food trucks and restaurants, who operate pop-up food kiosks within the festival grounds.

Perhaps the best part of all is the fact that Folk Fest is one of the most sustainably conscious festivals in the world! Everything, from the food vendors, to the festival in general, adheres to being ethical, sustainable, and ecologically sound. In fact, Folk Fest is “the first event in Canada to be certified by The Eco-Logo Program as environmentally-friendly,” while it is also fair trade certified and has numerous other sustainability awards. There is no bottled water to be found – instead they encourage attendees to bring their own reusable one which can be filled at countless taps around the festival and campsites, there are recycling and compost outlets everywhere, while they promote numerous green transport initiatives to get to the festival itself.

All in all, it's like one magic little (and by little, we mean tens of thousands of people) community that gets together for four-days of music, culture, and good vibes. All are welcome to experience the love and feel the joy, so get your tickets today before it all sells out.