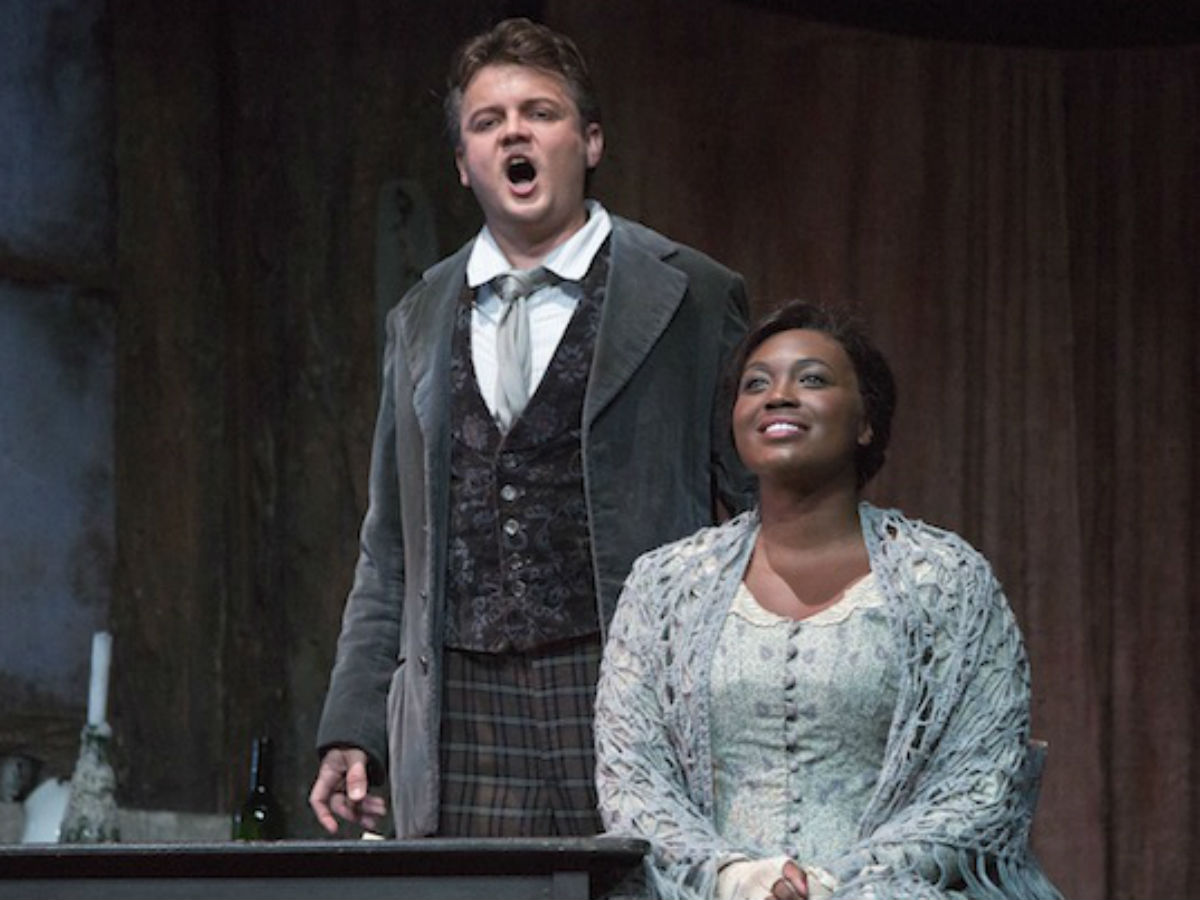 Angel Blue and Dmytro Popov at the Metropolitan Opera, 2017. Angel will be in Winnipeg to perform in Manitoba Opera's La Traviata. (Photo: Marty Sohl)

There’s nothing quite like the opera. Something about the lavish sets, flashy costumes and high-octane arias gets right to your soul. And luckily for Winnipeg, the Manitoba Opera always puts on absolutely stellar performances. This spring, they’re producing one of opera’s best-known works: La Traviata, by Giuseppe Verdi.

Some people are under the mistaken assumption that opera’s not for them, and we respectfully beg to differ. Opera is a feast for the senses like nothing else, and this particular production is one of the genre’s best of all time. We won’t give away the story here because you should discover it for yourself, but the story includes all sorts of scandal, fatal illnesses, a duel, and breaking free from some seriously overbearing social constructs. When you come to see La Traviata, you’re in for a moving story, tearjerking performances and thrilling drama - thanks to an amazing case of local singers and musicians.

The Manitoba Opera Chorus, under the direction of Chorus Master Tadeusz Biernacki, is hailed for their excellent singing and acting abilities. The chorus boasts a core of skilled singers who give generously of their time and talents. Some are voice majors at university, a few are singing teachers, but most work in jobs that aren’t music related. #madamabutterflymo #manitobaopera

Still not convinced? We have six reasons that will persuade you to get some tickets for one of this spring’s performances, including a special discount available from this blog only. Read on!

1. That opera song you know

Everyone knows at least a few opera songs, even if they’ve never actually been to an opera performance (Bugs Bunny is a completely valid way to learn about opera). One of those songs that people tend to know is "Brindisi," an Italian classic drinking song, that is arguably the most popular piece in La Traviata.

Go ahead, take a listen. We’ll wait here for you.

Odds are, you’ve heard that piece before somewhere – a TV show, a commercial, or any other number of pop culture references. But it all started with this composition. It’s one of the most popular songs in all of opera, is over 150 years old, and you get to hear it sung live.

You know when you go to a live music show and hear squealing feedback from the microphone? You’ll never need to worry about that here, because opera is a mic-free zone. Those songs you hear are one hundred per cent vocal projection, which ups the intensity factor dramatically. If you’re like us and like to sing in the shower, imagine singing to a room about a thousand times bigger, and you need to be heard in the back row. We can’t emphasize this enough: opera singers are intense.

La Traviata is sung in Italian, but there are surtitles (like subtitles, but on the top of the stage instead of underneath) so you can follow along in English, just in case you’re not fully fluent in la bella lingua (we aren’t either). But you don’t need to follow along to the words to appreciate the singers, or the live musical accompaniment provided by the internationally acclaimed Winnipeg Symphony Orchestra who play just below the on-stage action.

The Manitoba Opera regularly attracts world-class soloist talent, and La Traviata is no different. The role of Violetta will be performed by American soloist Angel Blue, one of the best singers of her generation who has sung at The Met, BBC Proms and more. Canadian wunderkinds Adam Luther and James Westman plan to shine in the other soloist roles, while a supporting chorus of some of the city’s best classical singers will round off an impressive cast.

Fun fact about opera: there are no understudies, which is why La Traviata is only being performed three times – soloists need to rest their voice between performances because it’s so demanding on their vocal cords, and have to perform at their best every time they step on-stage. Have we mentioned how intense opera singers are?

Although originally set in 19th century Paris, the Manitoba Opera has taken a new track for its staging this spring. Expect to see a 1920s motif, with a nod to the Roaring 20s and the likes of Josephine Baker and Jay Gatsby. The opera is set in Paris, which was leading the world in fashion and art at the time, and you’ll get to soak all that in with Manitoba Opera’s brand-new costumers and set design, created by award-winning designer Christina Poddubiuk.

The set and costumes are being premiered in Winnipeg, before being shipped off to other Canadian opera companies for their own performances of this Verdi classic. It’s not often you’ll get the chance to see a premiere of a new set and costumes, which are sure to sweep you away.

5. Chance for you to glam up

With all the Great Gatsby vibes you’ll see on stage, why not be part of the fun yourself? Manitoba Opera is giving you the chance to dress up in your best Jazz Age outfits, and spend a night reliving your 1920s Paris fantasies. There will be a photo wall where you can grab some very Insta-worthy selfies as you show off your Coco Chanel-inspired outfit, or put on your best Ernest Hemingway scowl.

During intermission, the Opera will be putting on dance demonstrations where you can learn how to Foxtrot or Charleston, thanks to local choreographer Brenda Gorlick.

If you want to experience a sneak peek of the production at a surprisingly affordable rate, full-time students can  attend the dress rehearsal on April 12th for only $13 each. If you’re looking to further round out your operatic education, Manitoba Opera puts on extra events leading up to their productions, around the context of La Traviata and its themes. Check out the full list here – some are free!

You probably don’t need a reason to be excited about La Traviata anymore after this, but the Manitoba Opera has stepped up with a deal that can’t be beat anywhere else.* They are offering 25 per cent off adult tickets for any available main floor seats for the April 17th and 20th performances. If you’re interested in this deal, contact the Opera directly at 204-944-8824, online at manitobaopera.mb.ca, or in person at the Centennial Concert Hall (lower level). Use the coupon code TOURWPG when you book , and get ready for an extraordinary night of performing arts you’ll be sure to remember for a long time.

*Offer valid while quantities last; cannot be applied to any other discounts or offers.