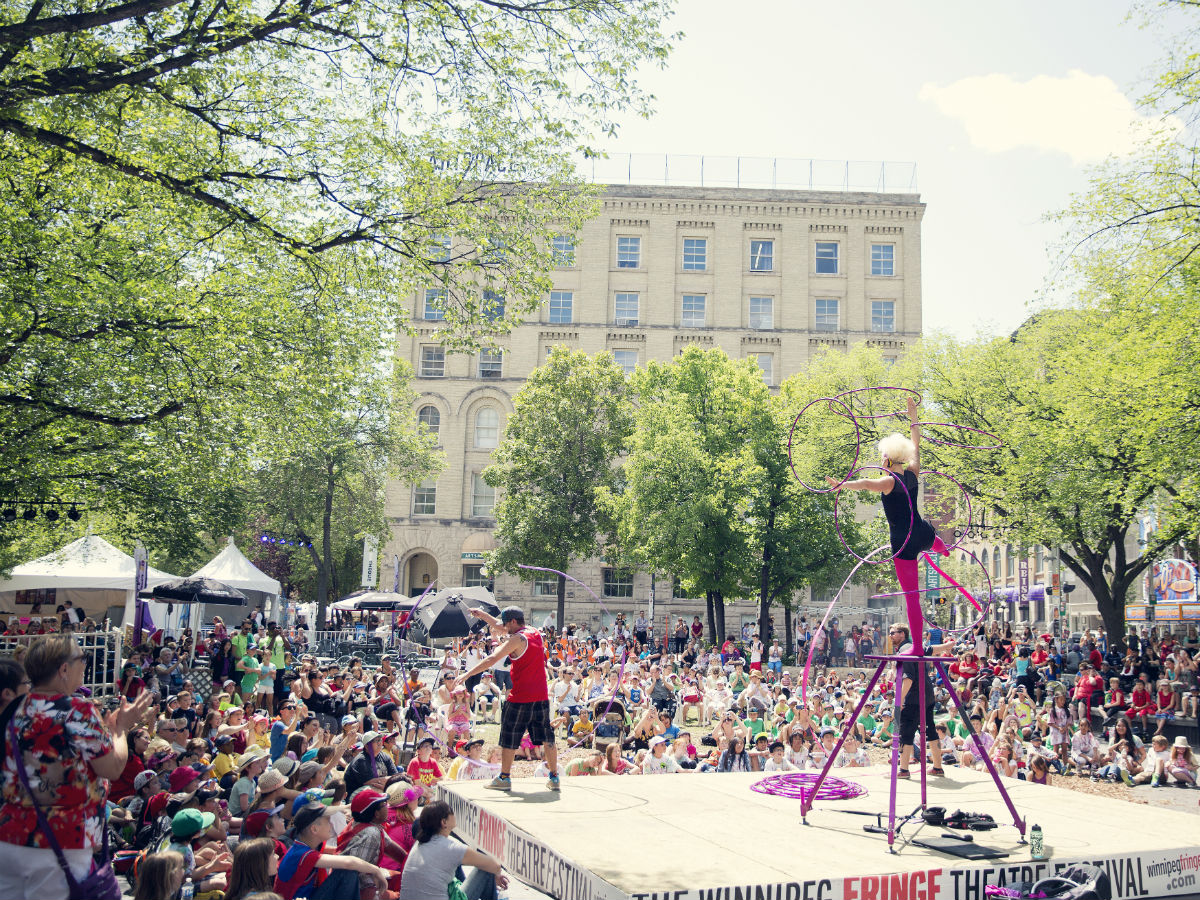 What's on in Winnipeg during the Canada Summer Games: Week 1

Your festivals, tours, sports, and shopping guide from July 28 to August 4

The city is in full-swing for the 2017 Canada Summer Games, but the always-amazing sports, shopping, and arts scene that Winnipeg has to offer means there’s even more in store for visitors. Make the most of your time in Winnipeg by checking out the festivals, tours, and exhibits happening around the city July 28 to August 4.

Explore some of the most extraordinary aircrafts to ever fly Canadian skies on an aviation innovations tour at the  Royal Aviation Museum of Western Canada. Tours are free with museum admission on Tuesdays, Thursdays, Saturdays, and Sundays in July. Children will love the interactive displays and open aircrafts!

If you prefer to explore the contents of a plate of local food, or journey to the bottom of a pint glass, consider one of the handful of culinary tours offered by  Downtown Winnipeg BIZ. Partake in a patio crawl on August 4, or join the breakfast club on July 30. The West End BIZ also celebrates its neighbourhood's diverse collection of global fare with walking food tours on Wednesdays and Thursdays (the tour on August 2 includes Ethiopian and Greek cuisine!) where you can meet the folks who made your meals.

History buffs can hop on board the  Prairie Dog Central, one of the oldest vintage operating trains in North America, as it travels to the rural community of Grosse Isle. On July 29 & 30, listen as a historian recounts stories of Manitoba farm life through the generations and the railway’s impact on building Western Canada.

Dropped my wee-man off at #prairiedogcentralrailway for a ride with his Momma and Papa, looked so cool!

Grab a blanket and load up on snacks before checking out one of the free outdoor movies offered throughout the city this summer.  Movies on Memorial is playing The Little Rascals on August 1, and the Lyric Stage at Assiniboine Park airs La La Land on August 4.

If there’s one thing you’ll experience in Winnipeg this summer, it’s a whole lot of live music. From local prairie acts to big names like Bruno Mars and a tribute show for the King of Pop, there’s tons of talent to take in.

For starters, the Winnipeg Folk Festival presents  Folk Fest at 510, an outdoor summer concert series happening Fridays at noon at City Hall. Grab a coffee from Parlour or a bite from Miss Browns and catch local Manitoban artists there on July 28 or August 4.

You’ll find more free tunes Tuesdays at Cityplace for the  Downtown Concert Series, and Sundays and Thursdays at the Lyric Theatre in Assiniboine Park as part of the Summer Music Series (including a Stevie Wonder tribute band on July 30 and the Winnipeg Steel Orchestra on August 3!).

If smooth jazz is more your style, you’ll want to stroll through the Leo Mol Sculpture Garden (also located in the park) where  local jazz musicians will be playing every Sunday afternoon among the flowers, fountains, and works of art.

Bruno Mars takes his 24K Magic World tour to the Bell MTS Place on August 2, and Showtime Australia brings incredible choreography and elaborate costumes to Winnipeg with the Michael Jackson HIStory tribute show on August 5 at the Burton Cummings Theatre.

Like the name suggests,  Salsa Sundays at The Forks turns the outdoor canopy area into a Latin dance party with live bands, DJs, performances, and dance lessons every Sunday evening in July and August. Salsa dancers of all ages, experience, and abilities are welcome at this wildly popular and free event.  Also on the grounds at The Forks is the  Founding Nations Pow Wow on August 7— a great opportunity for your family to experience the beauty and dance styles from the Aboriginal communities in Manitoba.

We’re a few months shy of hockey season, but baseball is in full swing (pun very much intended).  Catch the  Winnipeg Goldeyes as they host the Fargo Moorhead RedHawks at Shaw Park July 27 to 30, and don’t be scared if you spot some pale faces on July 28—it’s Zombie Night at Shaw Park with prizes, fireworks, and a pre-game zombie walk (PSA: please leave your own bats at home).

If baseball isn’t quite your speed,  thoroughbred racing at Assiniboia Downs is where you’ll want to be. Just west of the city on Portage Ave, live races take place Friday and Saturday nights. The Downs are fully licensed with a restaurant and VLTs. Parking and admission are both free.

If shopping is your preferred sport, then call CF Polo Park your field (or arena, court, rink, or whatever sports reference gets the point across).  Manitoba’s largest shopping centre has more than 200 shops and services, along with a dozen restaurants surrounding it in the St. James area. A cluster of new breweries and taprooms just opened up nearby as well—including One Great City, Torque, and Half Pints.

For locally-made gifts and goodies, find your way to the  Alleyways market in the Exchange District on August 4. Part of First Fridays, this monthly market offers Manitoba-made clothing, jewelry, art, veggies, and baked goods.

You could easily spend an entire day at  Winnipeg’s massive new fashion outlet mall, located on Sterling Lyon Parkway in the southwest end of the city. With more than 100 stores (almost half of which are brand new to Winnipeg!) and a unique selection of lunch spots nearby, Outlet Collection Winnipeg is a great place to cool off and take a break from all the outdoor activities.

Be sure to catch the end of the  30th annual Winnipeg Fringe Festival, a two-week theatre fest in town until July 30. More than 180 shows from across Canada and around the world are performed throughout Winnipeg, with bands, buskers, food trucks, and free kids fringe activities happening in Old Market Square in the Exchange District.

The Forks, the city’s vibrant and bustling tourist hotspot, hosts the  2017 Canada Summer Games Festival with 11 days of cross-country arts and entertainment, each one showcasing the best acts from every province in Canada, including The Sheepdogs, Serena Ryder, Bobby Bazini, Tanya Tagaq, and more. Every evening ends off with a fireworks show!

Galleries, artist studios, and shops stay open late on August 4 for  First Fridays in the Exchange. Self-guided tours, and art talks & walks are offered throughout one of Winnipeg’s most iconic and vibrant districts, where more than 150 immaculate heritage buildings sit within 30-square-blocks.

Come experience the magic of First Fridays in the Exchange tonight from 5pm to late! There is a ton of stuff going on at various galleries, shops and restaurants. Be sure to check out @spurfestival Bike Jam put on by @rainbowtroutfestival and the Exchange BIZ which will roll through Old Market Square. Featuring @micaherenbergmusic playing a free show at the Cube around 10pm! Also check out the Spur Fest party at @mckimbuilding. And finally, walk by our window gallery at 492 Main to check out the amazing works by @shouresh_draws! Photo: @93mp #exploretheexchange #firstfridayswinnipeg #spurfest #spur2017 #onlyinthepeg

Sixteen life-sized animatronic dinosaurs move and roar demonstrating how they looked and moved millions of years ago at the  Dinosaurs Alive! exhibit at Assiniboine Park Zoo. The exhibit features all three categories of apex predators – land, air and sea (including the Tylosaurus, which ruled the waters that once covered Manitoba during the Cretaceous Period- so cool!) and is included with zoo admission.

For more fossil fun, travel back to prehistoric times with the  World’s Giant Dinosaurs exhibit at the Manitoba Museum, a touring collection of more than 20 of the world’s largest dinosaurs with interactive activities for children including dig pits and robotic reconstructions of the extinct life forms (the dinosaurs are so lifelike that they even fart, which the child in us is making sure we mention).

Savour the smell of fresh bannock cooking over an open fire, feel the burn in your biceps as you churn milk into butter, and discover the delicious history of chocolate as you learn to prepare a traditional hot chocolate recipe at the  heritage workshops at the Lower Fort Garry National Historic Site. Tours and workshops are available most afternoons.

Our #daycamp is the best! At least that's what we've heard! #entertowin a #FREE week! #Follow us AND #tag a friend to be #entered in to #win a week of daycamp for one!! Don't want to wait, register at FoLFG.com now! #contests #contest #draw #enter #tagsforlikes @nationalparkscanada @downtownpeggy @yeaawinnipeg @parks.canada @bestofmanitoba @manitobachambers @travelmanitoba @manitobamuseum @mbculturedays @cbcmanitoba

Get a glimpse into the mind of iconic artist Pablo Picasso at the Winnipeg Art Gallery’s  Picasso in Canada exhibit. Thirty-five of the artist’s works have been brought together from art museums and galleries across Canada, including the celebrated Femme Assise (Seated Woman) and intimate portraits of five of Picasso’s lovers.

You don’t have to leave the city to escape the intense summer temps—Winnipeg’s newest water park is open just as the days are heating up. Four waterslides, spray pads for the kids, and diving boards for the brave will help keep everyone cool at  Transcona Aquatic Park in the city’s east end.

In the last few years, Winnipeg’s brewery count has gone from two to two digits, with a few more set to open later this summer. The newest additions to the city’s craft brew scene include the Exchange District’s Little Brown Jug and brew pubs Brazen Hall and One Great City. Eager to try ‘em all? Hop on a microbrewery tour with Winnipeg Tasting Tours, offered Thursdays, Fridays, and Saturdays.

Does your plan for the long weekend include many many many beers?