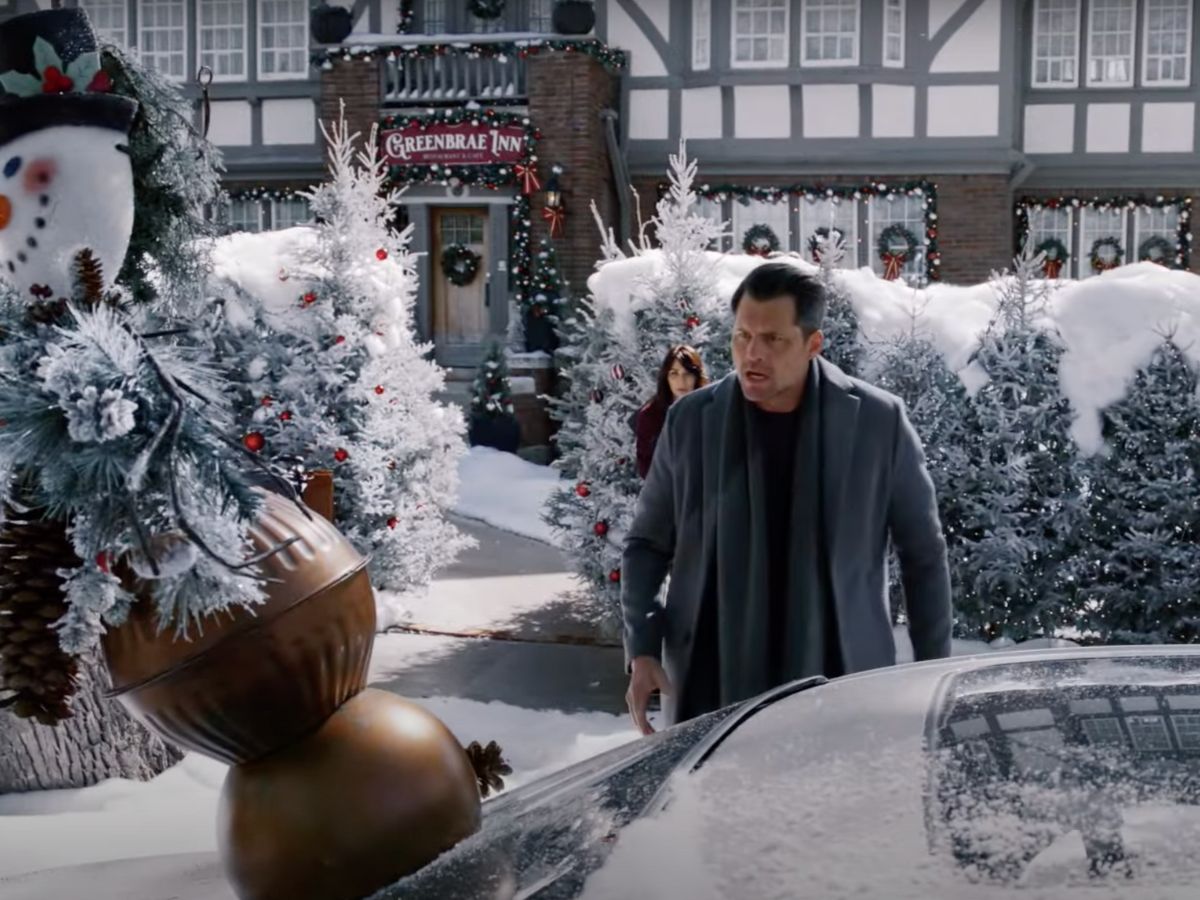 Spot that Winnipeg location during movie-of-the week season is here!

Throughout summer and fall the fake snow tends to fly in Winnipeg (actually, it’s usually just piled on the sidewalks) as Hallmark productions work their magic. And by magic, we mean: A foreseeable albeit heartwarming plot, sage advice from old people, a few notable actors on-screen, and a main character moving back to a hometown where many of the locations look like a heck of a lot like Winnipeg!

Not to give away the plot, but your eyes aren’t deceiving you when small town Vermont or even The Big Apple look a lot like the Exchange District or the Fort Garry Hotel. And that’s what this guide is all about.

Hallmark’s Countdown to Christmas is already on (it started in October!), while new to the scene is Great American Family Channel, which has a notable Winnipeg-shot production too.

If you’re not a fan of Hallmark, skip to the bottom as there’s still one Christmas gift of a Hollywood production (filmed here of course) featuring sleighs which slays–literally.

Here’s a little breakdown on all these films, along with where you can catch them this holiday season. (Note: Hallmark films in Canada are shown on the W Network, while the Hallmark Channel is available on apps and streaming services like fuboTV here in Canada.)

The Exchange District was abuzz when this one was being filmed, as the film transformed the News Café into Gilbert’s Deli, a fictitious New York City establishment where most of the action takes place. Hallmark describes the premise as such: “A matchmaker connects Molly and Jacob, but their new romance is put to the test when they realize that they are competing deli owners. Will a Hanukkah miracle keep them together?” Talk about one pickle of a situation!

From what we can tell in the production stills, an outdoor cinema scene was shot right in Old Market Square while most of the scenes take place within buildings in the Exchange District too. There will be a latkes competition and plenty of lox, plus Lisa Loeb co-stars and performs in it! The film also features Broadway actor Jeremy Jordan as Jacob (whose film credits include The Last 5 Years and Joyful Noise) and Israeli actress Yael Grobglas (Petra from Jane the Virgin and countless other TV shows) as Molly.

A Christmas Cookie Catastrophe – premiered November 27 on Hallmark and will surely be coming soon to W.

This one has it all when it comes to a Hallmark cookie-cutter plot: A tree farm scene, the small town setting of “Maple Ridge”–which is actually Carman, MB–and a plot about a cookie company CEO being forced from her job (talk about your chips being down!) and a Hallmark-handsome rival baker who just might make that batter better. The full Hallmark synopsis is: “Annie faces her first obstacle as CEO of Cooper's Cookies when grandma's secret recipe is stolen. While investigating the theft, she works with local baker Sam to recreate the beloved recipe.”

The film stars two actors who have shared the Hallmark screen before: Rachel Boston ( 500 Days of Summer, Ghosts of Girlfriends Past) as Annie and Victor Webster (Days of Our Lives, Sex in the City, Bones… Just click on his Insta above, we know you want to) as Sam. On Insta, Webster describes the film as, “super funny and full of that good ol Christmas spirit” which is really all you need to know. For locations, Boston’s Instagram contains many clues, plus you can learn more about it here on this Dear Hallmark YouTube channel, where she discusses the production.

We Wish You a Married Christmas (which was tentatively titled, A Christmas Disconnect) – premiered on October 22, but will be airing again.

This one is set in the small town of Gracious, Vermont where, “a couple goes to… reconnect at Christmas on the advice of their marriage coach.” One look at the trailer and production stills and locals will be quick to note Winnipeg Top 10 attractions locations like FortWhyte Alive, Assiniboine Park and The Exchange District–good Gracious indeed! Plus, The Granite Curling Club, with its iconic fireplace and Tudor interior, plays a starring role as the Greenbrae Inn in a couple of pivotal scenes. Just look at all that fake snow!

This film stars Kristoffer Polaha (CW’s Life Unexpected, Jurassic World: Dominion and Wonder Woman 1984 where he played “Handsome Man”) as Robby and Marisol Nichols (countless TV credits) as Becca. Nichols is now a new favourite of ours, as she posted so many nice photos and vids while she was here filming in June–including shopping at CF Polo Park and exploring The Forks. The film also features actor Brian Sills (The Marvelous Mrs. Maisel, Unbreakable Kimmy Schmidt), a veteran of productions like these who took some nice shots of the city when he was filming here too. There will be alpacas(!) and you can learn all about the production in this video with Nichols and Polaha.

Hallmark’s new TV competitor also shot a film here this past year. The plot behind A Brush with Christmas Romance (or Crafting Christmas–honestly, we don’t know which title they’ve settled on as it is listed as both on the Great American Family website) reads:

“Over the week leading up to Christmas in the town of Bayside, Charlotte tries to capture her own unique style in the local art scene while also helping her mother run the family restaurant. Disheartened and struggling to find time for her art, Charlotte throws out her latest painting, only to discover that it has been anonymously submitted to the Christmas art festival. It turns out that Wyatt, a visiting artist, stumbled upon her discarded work and is now using the festival’s exposure to find its mysterious creator.”

While Great American Family Channel settles on the final name of this film, we can tell you that it stars hotties Jillian Murray (MTV’s Awkward, TNT’s Murder in the First, and so many others) and Joseph Cannata (he works out… and has been in a number of Movies of the Week).

For locations, the trailer and stills aren’t yet out, but we do know one key night scene was shot in a dray way in The Exchange District. From Murray’s Insta, we also know that while in Winnipeg she discovered she likes ketchup chips and that they, “smell so nice.”

Harvest a few you may have missed

This past autumn, Hallmark also presented its “Fall Harvest” lineup of eight new films. It featured three Winnipeg productions–Romance in Style (plenty of Exchange District here), Pumpkin Everything (where Morden, MB’s Bella’s Castle was transformed into Michael Ironside’s Store) and Perfect Harmony. As to this last one, Emmy award-winning director Stefan Scaini showcased so many of the local sets on his FB, including Canada Life Centre, The Fort Garry Hotel, and streets of the Exchange District (scroll down to the shots from July through August).

Past classics to look out for

This being an annual guide, you can always look back at our 2021, 2020 and 2019 guides for productions like Two Turtle Doves, About a Kiss Before Christmas–starring Terri Hatcher(!), and a personal favourite of ours, Amazing Winter Romance. The latter features our insider, actress and producer Melissa Elias, who plays her part in a love triangle that revolves around the world’s largest snow maze at A Maze in Corn. As you can read in the 2020 guide, Elias provides fun tidbits on each local production along with the local talent in it.

And now for something completely different…

If the wholesomeness of Hallmark is not for you, head to the big screen this holiday season to see Santa Claus violently dispatch a group hostage-takers.

Violent Night stars David Harbour as a belligerent (and highly skilled in hand-to-hand combat) Santa Claus who is forced into taking on a group of mercenaries that have captured a wealthy family on Christmas Eve. As the synopsis states, “this Nick is no saint,” and in the below trailer (warning: it’s pretty violent) you’ll see he’s really not nice when dispatching these baddies led by John Leguizamo (who we all know plays the heel with such zeal).

This action/black comedy (it’s clearly very tongue-in-cheek) was shot in the city from January to February 2022 (along with at Tarrow House just north in St. Andrews, MB) with the talent and crew staying at the Fort Garry Hotel (both a film set for Hallmark, and a place where the stars stay—what a joint!).

The film comes out on December 2.