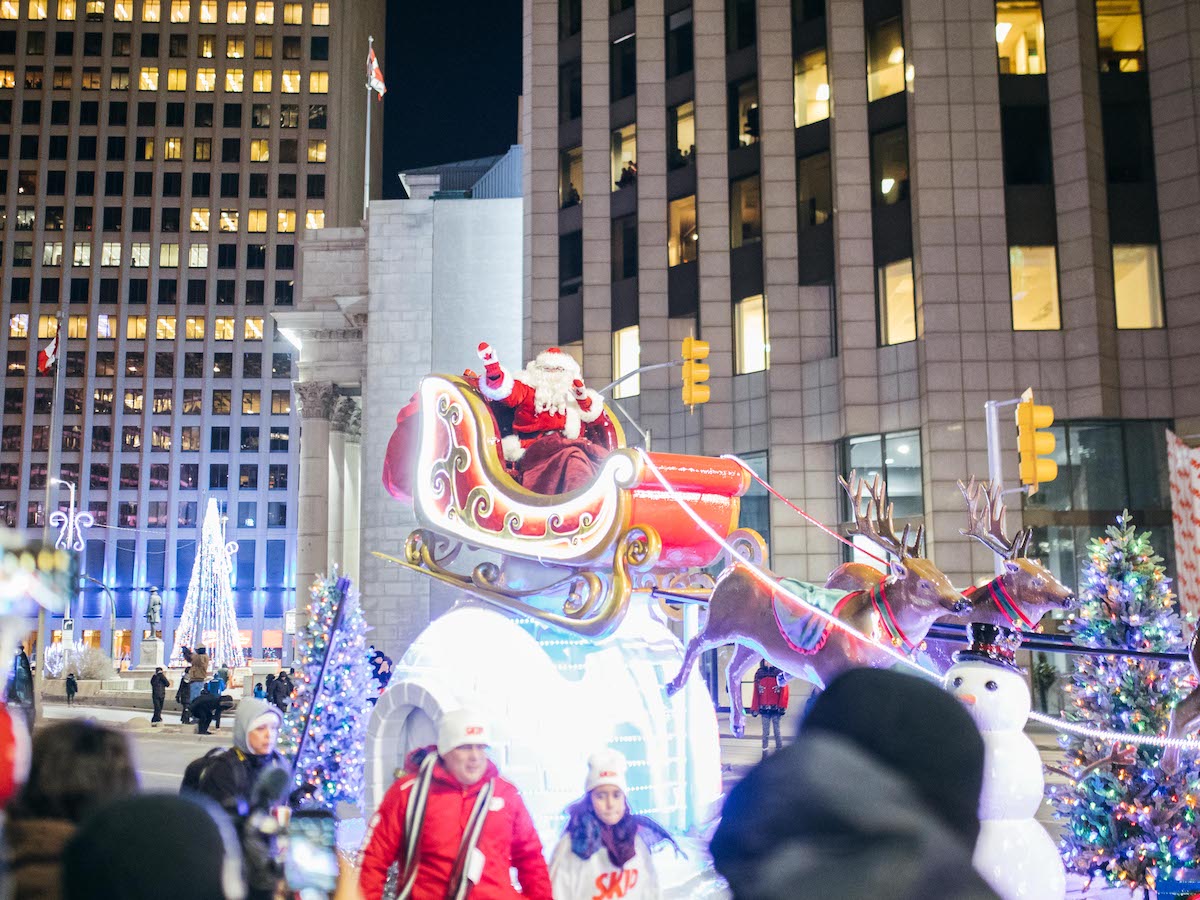 After a two-year hiatus, the official big parade down Portage takes place November 19

Winnipeg is ready to welcome Santa back downtown for one afternoon only.

It’s been three long years since the city has been able to officially stage The Manitoba Hydro Santa Parade. This time-honoured tradition started in 1909 (last year’s instalment was a simple “walk by” float featuring the Big Guy at Shaw Park, while 2020’s was of course canceled), regularly bringing thousands of people to line up alongside Portage Avenue to see the big guy in red along with so many colourful floats.

This year, to accommodate the Jets home game at 6 p.m., The Manitoba Hydro Santa Parade will be starting right at 3 p.m., on Saturday, November 19.

This is great news for families with little kids, as the weather will be warmer and the floats will surely look striking as they strut their stuff down Portage Avenue during magic hour (the sun is set to set at 4:40 on that day). It will also allow you to stay downtown to attend events like the Jets vs Penguins, Bad Parent at Prairie Theatre Exchange (only a few seats left), or comedian Ron James at The Burt if you're looking to make a full evening of it.

Plus, you can still get there an hour early because the block parties on Portage Avenue are back from 2 to 3 p.m.

Sport Manitoba will be hosting its sporty block party (expect plenty of activities to keep your kids moving) between Fort and Garry Streets; Manitoba Advocate will be hosting one between Carlton and Hargrave which surely will bring back games from 2019 for the kiddos like snowman bowling, winter coat hula hooping, and perhaps even the winter pumpkin roll; and title sponsors Manitoba Hydro will have a fun-filled party between Edmonton and Carlton Streets.

The parade route is also headed in a different direction this year.

Like the Pet Shop Boys and that aforementioned sun, the new parade route will go west. It starts at Portage and Main, then heads down Portage before turning south down Memorial for a short stretch, ending on York Avenue at Memorial Park.

As to what you can expect–all that magic!

Your little ones will be dazzled at all the displays from some of the city’s biggest attractions and organizations. There will be huge floats and music to get you moving, plus so much excitement for your little ones–so be sure get your spot on Portage early to get a great view of it all. All you need to bring are some warm clothes and your sense of wonder.

Each block will have a designated section for accessible seating for anyone who needs assistance, while the parade organizers kindly ask that anyone in the front rows on Portage remain seated (to give everyone a great view) and that people not bring their pets. For more info, etiquette, and spectator tips, click here. There will be restroom stations set up along the parade route too.

And finally, this being the time of giving, The Manitoba Hydro Santa Parade is working with the Christmas Cheer Board. Please be sure to bring something for the bin–be it toys, clothes or non-perishable food–as they will be collecting donations in the Manitoba Hydro Building atrium while volunteers for the Cheer Board will also be walking in the parade to collect items too.

For more information on parade routes, and to inquire about entering a float for your business or organization, go to the official website.