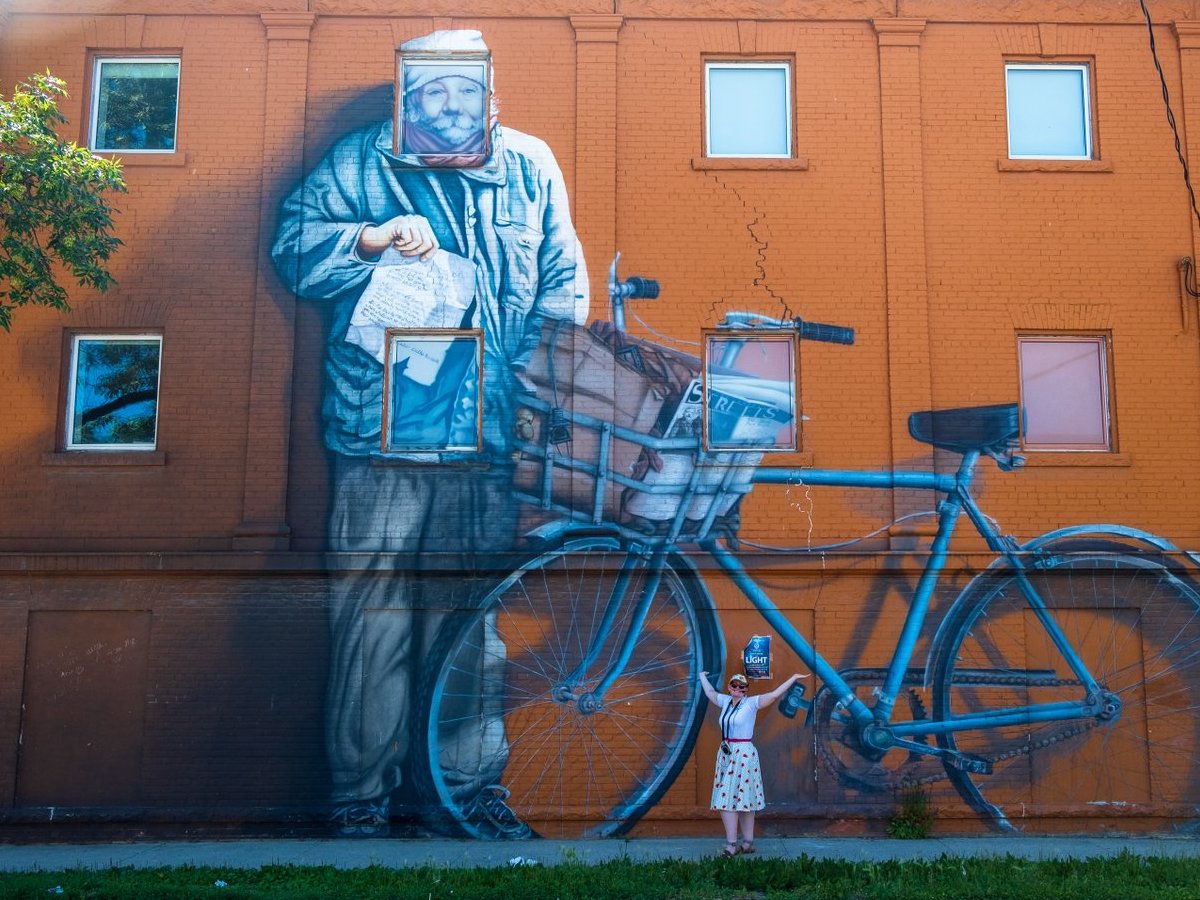 The West End is ready to welcome everyone, be it a tour with the BIZ or free lunch-time concerts

The West End is without doubt Winnipeg’s most worldly neighbourhood.

Its stories—which are often global in scale—have enriched the area’s culinary and cultural scenes, and are literally painted all over the neighbourhood’s walls. While strolling its blocks you’ll encounter more than 50 murals depicting everything from local boy-come Hollywood star, Adam Beach, Vietnamese and Ethiopian history (the area is home to the largest concentration of pho and injera shops in the city) and even a young strapping Gigi Buffon making a big save for the Azzurri (because Italy also represents).

These murals alone are worth the short walk from the city centre. Pair them with amazing restaurants that provide a world of flavours and  locally owned shops that are utterly charming–now that's a winning combination.

And that's what our friends at the West End BIZ are all about, with tours that are a jaunty showcase of this area that's home to everything from pupusas to kombuchas, bannock and organics, to viking art and buttery tarts. It's truly that diverse.

For just $5 per person ($2 for kids 12 and under) you can join an intrepid West End tour guide and a group of like-minded individuals for an informative stroll through the area’s bountiful public art.

Available in both English and French, you’ll learn about how we are all on Treaty 1 Territory; famous West End characters like Zoohky; how so many countries have come to be represented within the neighbourhood; why there’d be no Bugs Bunny without Winnipeg; along with anecdotes about some of the local artists who have created these colourful works.

Plus, the tour guides alone are fantastic, serving up anecdotes that are nearly as crisp and creamy as the fillings you'll find in all the local banh mi. (And perhaps even as herbaceous.)

Two-hour mural tours run daily, Monday to Friday starting at 10:30 a.m. and 2 p.m., throughout July and August. The option of private tours are also available. You can book by contacting tours@westendbiz.ca.

Mural tours meet at 600 Sargent Ave., and you can book individual tickets here.

The West End is currently home to around 800 small businesses, with a population of 36,000 people. Its 150 or so restaurants cover a vast array of cuisines, from Caribbean to Cantonese, Salvadorian, Indian, Korean, Indigenous and Thai.

On an  Around the World in a Few Blocks restaurant tour you’ll visit some of the area’s most noteworthy and newest eateries, tackling four-courses at three-stops for just $49 per person! ($7 drink tickets are available to purchase during the tour too).

On July 21, the stops include  Good Lands Café, specializing in vegan Middle Eastern cuisine; Glady’s Caribbean Kitchen, one of the city’s most popular new spots for jerk, oxtail and curried goat using plenty of local ingredients; and India Palace, where culinary couple Saroj and Ashwani Nagpal having been winning hearts and stomachs since 1992. Plus, Goodies Bake Shop—an Italian dessert emporium that has been operating since 1984—will be supplying the sweets to end your tour. You can book that one here.

On July 28, 2022, Around the World will cover Vietnamese, Indigenous, Indian and ethical baking, featuring some of the area’s best and most well-known spots. The first stop is Viva Restaurant, a space celebrated for its sleek dark interior, herbaceous bowls of Vietnamese cuisine and huge summery rice paper rolls.

From there, it’s on to Bread N Biryani, one of the city’s newest—and hands down most authentic—Indian restaurants. Next comes Feast Café Bistro whose owner, Christa Bruneau-Guenther, many will recognize from Food Network Canada’s Wall of Chefs. When she’s not judging home cooks' creations on TV, Christa can be found interpreting Indigenous cuisine at this neighbourhood gem, all while training young locals in the kitchen. At Feast, you’ll also get a dessert course from Eadha Bread, a celebrated bakery just a few doors down where everything is fermented which operates “through a queer, anti-racist, decolonial lens.” Bookings available here.

There are two food tours in August, on the 11th and 18th (again, both on Thursday) that bring even more gems.

The 11th features  Rimyya Friendship Bar and Restaurant, which recently took over the Original Sorrento’s and is now offering a selection of Habesha dishes to let you work on your injera-scoop technique (plus it is still doing Sorrento's-style pizza! Because you may as well use that pizza oven). This is followed by more Ethiopian at Merkato Restaurant (a favourite of ours as you’ll read in the link),before ending at the city’s original Vietnamese joint, Thanh Huong Restaurant, which, as you can read here (go to the bottom section) has been serving up aromatic bowls since 1987. In fact, owners Moc and Thuyen Thai having trained many of the Vietnamese chefs working here today. Your Thanh Huong stop will also include sweets from legendary Morden’s Chocolates. Book here.

On the 18th, for the final food tour of the summer, it’s once again an impressive lineup.

The first stop is  Bistro on Notre Dame, one of the newer spots in the neighbourhood. Having opened during the pandemic, it has continually won acclaim for a menu that includes overnight waffles, Métis-inspired comfort food that lists and celebrates the abundance of local sources, and generous portions from friendly owner Dean Herkert. It’s a total gem. From there, you’ll head to neighbourhood staple Gojo Ethiopian, where you’ll meet the affable owner Solomon Meshesha while learning about ingredients like the gluten-free teff flour that is used to make the spongy injera. Next comes Pho Hoang, a staff favourite of ours whose owners Tom and Heather Hoang have created such a devout following that they now have multiple locations in Winnipeg. This is the original Hoang, and is a must-visit for anyone interested in pho, vermicelli and even rolled ice cream! At this final stop, you’ll also get a selection of treats from Gâto Bakeshop, another spot we can’t stop raving about as pastry chef/owner Laura Gurbhoo dazzles with her eco-conscious, flaky (and often vegan!) creations. Book here.

All of the Around the World in a Few Blocks tours start at 6 p.m., with the meeting place location being sent after booking. Of course, along with all that food you’ll also get a full serving of history, art and culture from those chipper West End Biz guides.

WHAT ELSE IS UP IN THE WEST END?

So much! But in particular, we should single out the current lineup of free concerts in Central Park.

Performances in the Park (Wednesday and Friday throughout summer, starting at noon) will introduce you to the sweet sounds of everything from the Bavarian Musk Werks to the folk stylings of Jess Rae Ayre (a member of notable local trio Sweet Alibi, who just played Folk Fest), to Marco Castillo & The Brazilian Beats Band, the Winnipeg Steel Orchestra, and the one-and-only J.D. Edwards.

The full schedule is in that “so much” link above, so make your plans to get some takeout from one of the many restaurants close to Central Park then grab a seat as the music takes you there.

For even more on why the West End is the Best End, go to WestEndBiz.ca