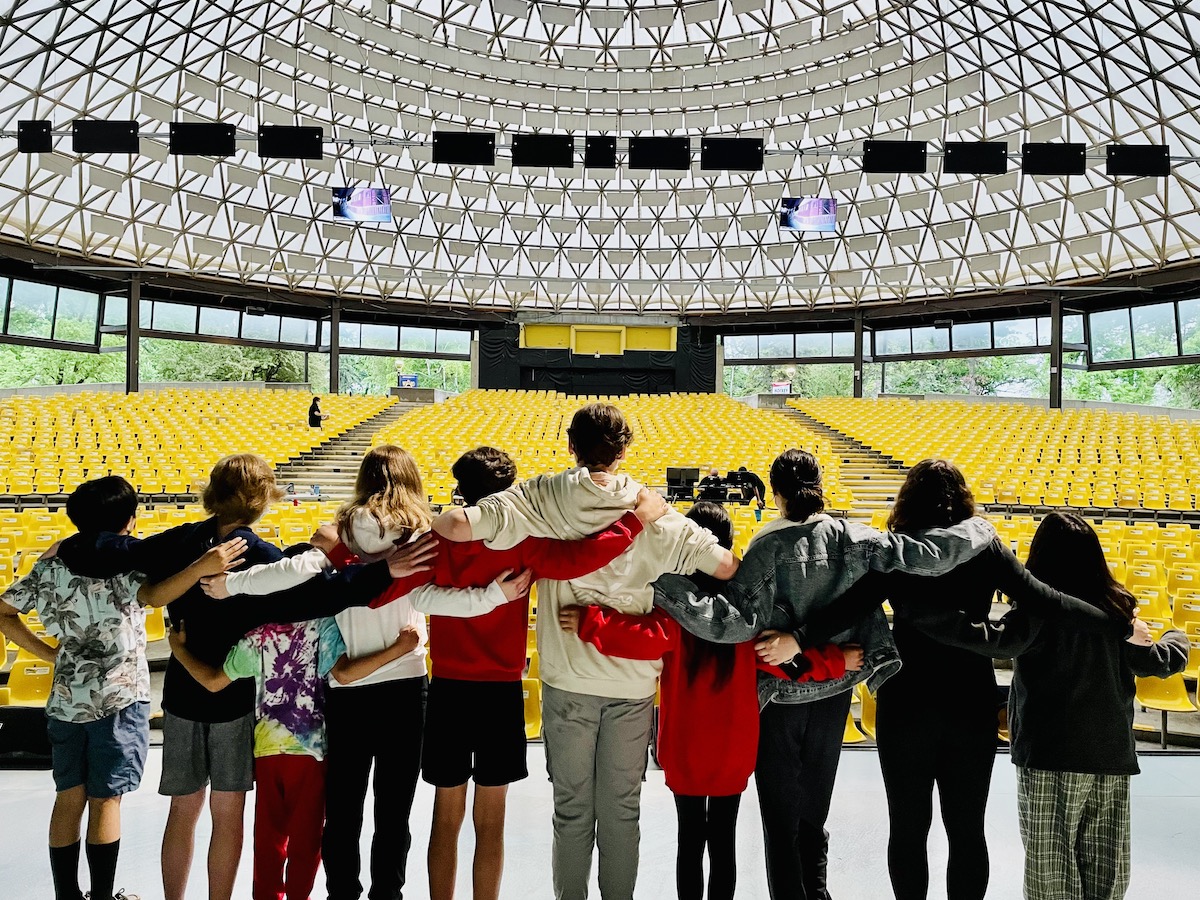 Canada’s largest and longest-running open-air theatre experience (not to mention its most magical) is back!

Rainbow Stage will present The Hockey Sweater, based upon the classic Canadian story by author Roch Carrier from June 30 to July 17. Later this summer, they’ll bring the Yellow Brick Road back to Winnipeg with The Wizard of Oz (August 18 to September 24). Both productions come after a two-year wait due to the pandemic.

To set the stage, we’ve interviewed Rainbow Stage’s Carson Nattrass, the actor, writer and director whom is this revered company’s Artistic Director.

Local theatre goers will of course know Nattrass from his many celebrated roles, from playing Shrek in Rainbow’s hilarious production back in 2016 [check out Randal King’s rave review here], Shere Khan in The Jungle Book at MTYP at The Forks (at MTYP he also made his theatre directorial debut with James and the Giant Peach, again to rave-reviews like this from CBC) and Mr. Banks in Rainbow’s Merry Poppins (where he also blew us away with his pirouettes).

He’s been in productions across Canada, including winning the Betty Mitchell Award for “Best Actor in a Musical” for the Calgary  production of Unrinetown, has directed a handful of plays across Canada over the years and has been in a number of feature films too.

Below he raises the curtain on why The Hockey Sweater will have you singing, how this young cast and veteran crew are already champions and how excited they all are to share this iconic venue with audiences this summer.

What is your history with Rainbow Stage?

I grew up across the river from Rainbow in North Kildonan and saw The Wizard of Oz here in 1991 and it blew my mind. So that was my first experience; I must have been 10 or 11.

I come from a theatrical family, so I had some aunts and uncles who worked here before me, and my sister performed here for a few seasons before I finally caught the theatre bug.

I then went off to theatre school and when I moved home that’s when I first started doing shows here at Rainbow back in 2004.

Between 2004 and today it’s been a non-stop love affair with this incredible building and my favourite form of theatre–musical theatre! I’ve now been an actor, a director and I am the artistic director, which is bonkers!

This creative team is chock-full of celebrated Winnipeg performers like Paula Potosky as the music director and conductor, and Jaz Sealey doing choreography. Given the time off during covid, is this like a family reunion of sorts? And do they make your job easier?

Well, it starts with the fact that I endeavour to hire a Manitoban in every role. So, that’s a great place to start from. When it comes to Paula, Jaz, etc. I also take the show into consideration.

With Jaz, he starred in his first show here when he was 14. He was on rollerblades in that show, he is a hockey player, so there couldn’t be a better person to lead this cast of kids in a hockey musical. And it’s just a bonus that he has taken four months off from being in the cast of Broadway’s Aladdin. He’s come in from New York to do this with us–so that’s pretty exciting for the kids too. I should add too that this is his debut as a choreographer. Another thing about Rainbow is that, because we endeavour to hire Manitobans, it gives people opportunities. And this is a skillset of Jaz’s that is new, and I hope he is learning that he is very good at it.

And then Paula: She’s been music director for the past few years even though she is often a star on our stage–she was Mary Poppins of course–but she is so amazing with kids, and it’s our job to steward positive experiences as we introduce professional theatre to all of these talented kids.

So this Paula-Jaz combo is everything. These kids are learning so much, but then having fun at the same time.

In regards to that, you literally have a full hockey team cast of characters with the kids. Do you actually feel like a hockey coach at some points?

… And they are all the leads of the show right? They are not the children’s ensemble in an adult musical. This is a show led by ten amazing kids. And they have homework both from us and from school and they are carrying it beautifully.

There’s a whistle around Jaz’s neck at all times; they take a knee around him. He runs that room like a hockey coach, which is really fun because it changes up the vibe for a musical theatre rehearsal.

I feel more like the general manager of the team. I’m up in the booth making decisions.

How did you land on The Hockey Sweater for Rainbow Stage’s return? 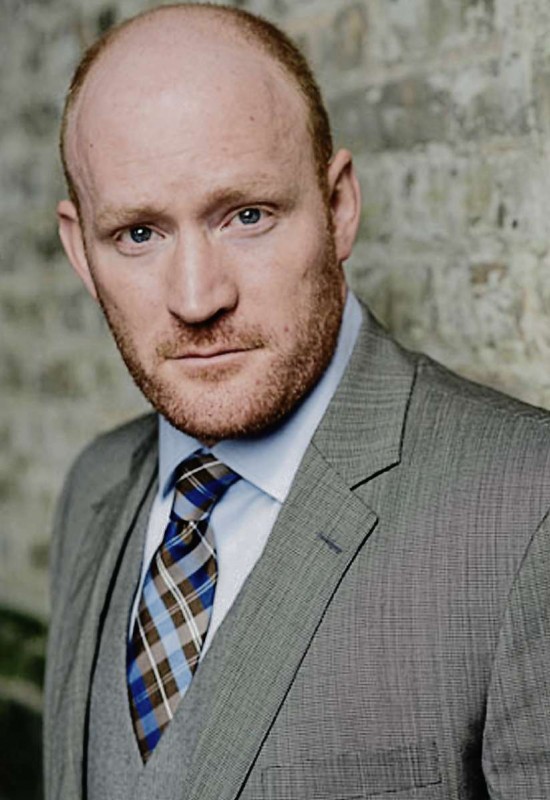 It was a long journey. I saw the show in its first iteration in Ottawa in 2018. I’d just started my job as the Artistic Director of Rainbow. I heard they were making a musical of it at the National Art Centre in Ottawa, so I flew out to see it. I immediately requested the show but the rights weren’t available to us as they had planned to tour that production. But then the pandemic got in the way… and one silver lining is they created a non-replica rights licence package for Rainbow Stage so we could do this show coming out of the pandemic.

And what is so amazing about that is that the show is also about family, it’s about community, and in a time like this we need stories about coming together and celebrating differences instead of getting more polarized. This is a story about coming together, and it’s beautiful. It’s just the right vibe you need in the summer as we move forward.

I think it’s important for Rainbow Stage in its ability to bring lots of people together to tell our stories. And we are developing musicals of a scale that our audiences are going to adore.

Anyone out there that really knows me will answer that question that I’m just going to cry. It was really important for all of us to keep each other safe these past couple years, but one of the reasons I love what we do is because music, dance, storytelling–and then doing that in an outdoor park–I think hits every single piece that someone needs to feel healthy.

To gather again–but to do so in celebration of the talented musicians, dancers, singers, skaters–it’s the opposite of what we’ve had to do these past two years. And so to have bums in our seats again, it’s a model for what we want to move forward. It’s an important step, and Rainbow Stage is really excited to participate in that.

As an open-air venue I joke that the ventilation system we’ve “invested in” is the best in any theatre in Canada, because it’s just air. It’s a safe place to come back and celebrate what we’re capable of as a community. And I can’t wait to see that.

We’re emotional every day. We’ll rehearse a song and say [faking tears] “oh my god, people are going to love it.”

***
For tickets to The Hockey Sweater and more info click here.

This interview has been condensed and edited for formatting purposes