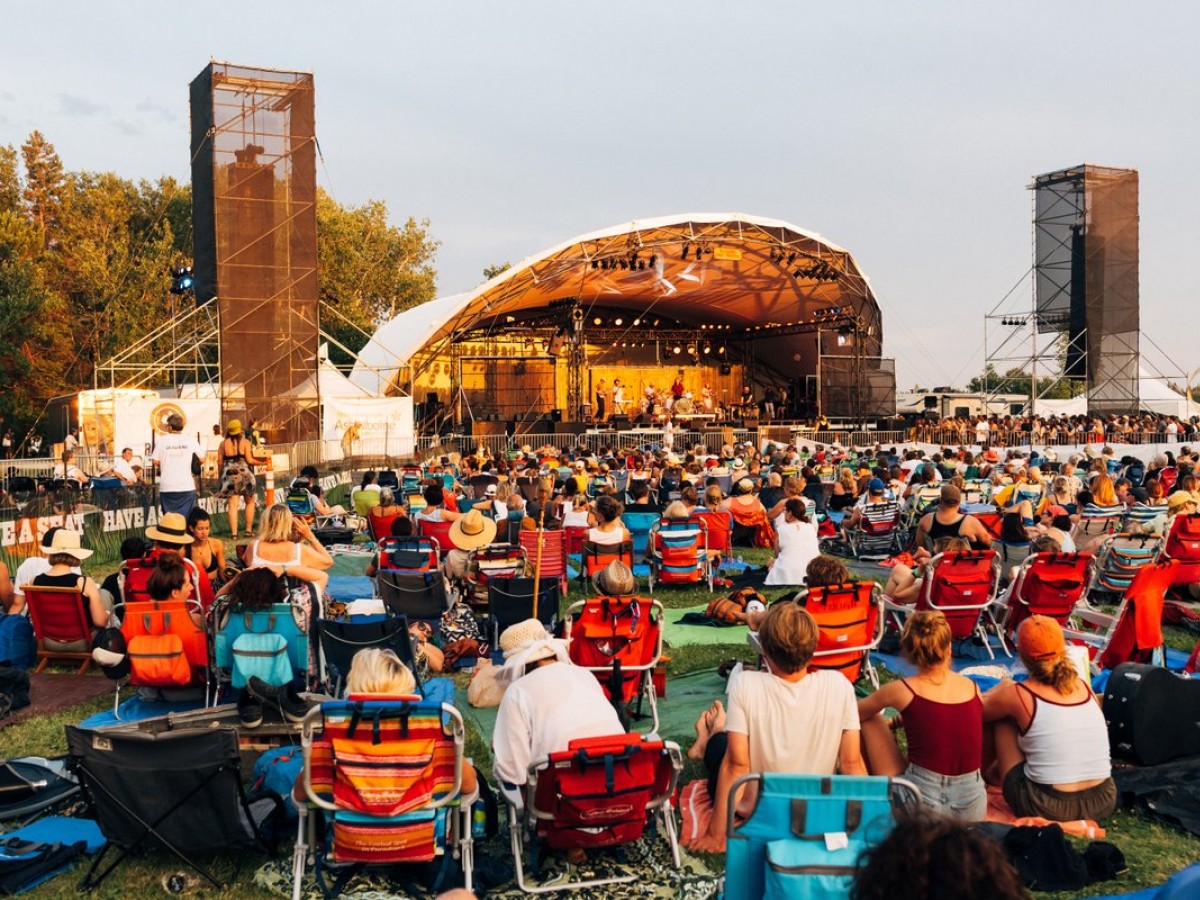 After a three-year hiatus, we are so excited to celebrate the return of the Winnipeg Folk Festival, one of the city’s largest live outdoor music events.

Since 1974, the annual event takes place on the stage(s) at Birds Hill Provincial Park, located on Treaty No. 1 territory and the national homeland of the Red River Métis. It welcomes more than 70,000 people over the span of four days while hosting performers and visitors from North America and the rest of the world (it’s a pretty big deal).

If you’ve been to folk fest in the past, you know that the grounds provide the most welcoming environment. From the long lineups of cars filled with eager folkers down to the numerous volunteers, everyone and anyone comes together to celebrate our musical and community roots. The festival celebrates diversity through culture, art, music, food  and shops for all ages (even the wee folk).

It operates in a creative, inclusive and sustainable fashion, celebrating the diversity that exists in our communities and people. It is committed to an Indigenous Initiative by engaging with an Indigenous Advocacy Circle and partners to celebrate Indigenous culture, respecting the Treaties that were made on the territory.

The event is also award-winning in sustainable practice—it operates as a bottle-free event and is powered by renewable energy, with countless other efforts to reduce waste. It was the recipient of the Clearwater Award in 2018 (given to an event that prioritizes environmental stewardship and demonstrates public leadership in sustainable event production), the Greener Festival Award in 2013, and is Fair Trade Certified. The festival also embraces its accessible approach, being car, bike and bus friendly.

Create your planned route to the festival grounds here with lists of available parking passes and carpools, campground shuttles and simple bike routes from Winnipeg.

In past years, the festival has hosted some pretty big names like soak-up-the-sun queen Sheryl Crow, City and Colour, Milky Chance and Kacey Musgraves. For 2022, the lineup is once again stacked for this event that we have missed so dearly.

This year’s folk-tastic headliners include Bahamas, Portugal.The Man, Tash Sultana and Japanese Breakfast, along with a ton of hidden gems to watch. Just like previous years, our staff has hand-picked a guide for the must-watch performers for your 2022 Winnipeg Folk Festival experience:

Blues Hall of Famer Bettye LaVette is known as one of the “greatest soul interpreters of her generation.” She has sung for President Obama and placed six records on the rhythm & blues charts. Her original song “Let Me Down Easy” was recently featured in American electronic music duo ODESZA’s most recent single “The Last Goodbye” (a perfect song for a 5k run or a serious spin class). Get ready for a show filled with LaVette’s most popular singles booming with groove, heart and soul.

Texas-born Buck has been playing blues, manouche jazz and western swing throughout the southern state since his early days. In 2012, he joined forces with singer and songwriter Adrienne Lenker (whose angelic voice you will hear in the track, “Indiana” below). The pair went on to record two EPs and eventually expanded into a four-piece “Big Thief” with Max Oleartchik and James Krivchenia. Their sound is beautiful, with their voices creating the perfect harmonies and lyrics carried by the most majestic melodies.

Ah, we love a good hometown artist. JayWood (Jeremy Haywood-Smith) is from Winnipeg and started his music career with “sad jangle pop songs.” This intro to music-making was inspired by his sad boy hours, and eventually his tracks moved on to become more of a psych funk (a personal favourite genre). His sound is self-taught, with notes of indie-pop and jazz.

From Victoria, B.C., duo Ocie Elliot (Jon Middleton and Sierra Lundy) create chill acoustic tracks that are perfect for late night drives and rainy Sundays. Their recent 2018 EP is idyllic and has been a constant revisit for me personally. With melodies that feel like magic and lyrics that tug at your heartstrings, you won’t want to miss this duo.

Originally from Chicago, Eric D. Johnson is the creative force behind Fruit Bats. It started out as a four-track recording project and transformed into a touring band with a juicy lineup. The sound of Fruit Bats is indie folk-rock, with his voice sounding like a split between Lennon and McCartney. For anyone that is fruit-bat curious, take a listen to one of my favourites “Today,” linked below.

You’ll be cutting up a rug with this Winnipeg bluegrass supergoup. This four-part harmony of singing, blues infused mandolin and jumpy fiddle tunes will have you dancing all night. This group has been playing together for around 20 years and have filled the folk cups of audience members for decades. Their sound is filled with high energy from each member singing two, three and four part harmonies in a bluegrass style.

Straight from Nova Scotia, this fiddle playing, piano striking, singing sister duo has lit up the traditional and contemporary Celtic genre. They have appeared on stages across North America and Europe, serving stunning vocals in both English and Gaelic while integrating their unique and percussive step-dancing moves. Their Celtic-folk melodies will make you feel like you’re dancing on Irish soil. Don’t miss this perfect blend of sibling harmony on the Little Stage in the Forest on July 9.

The festival always partners with local companies to offer a variety of healthy, ethical, sustainable, affordable and Local, Organic and Fair Trade (LOFT) food options. Here are the vendors to look out for across the festival grounds:


Known for their incredible selection of premium hand-crafted sandwiches, this vendor has a killer menu for those looking for a filling bite at the festival. Their offerings include River City Brisket, smoked buffalo chicken, cola BBQ jack fruit and house pickles. The ingredients are fair-trade, locally sourced and organic, with vegetarian and gluten-free options too.

This true Winnipeg staple offers the most mouth-watering garlic-butter-crusted za. Grab the best slice on this side of heaven featuring a variety of toppings. At the festival, they'll also have gluten-free and vegetarian slices using local and organic ingredients.

From the original Japanese crêperie, Kawaii Crepe is back at the grounds to serve up savoury crepes like Pump up the Yam, and the Pineapple Expression, along with items to cure your sweet tooth like Fruitella and It’s a S’more. This vendor is fair-trade, using local and organic ingredients, offering gluten-free, vegan and vegetarian options too.

This year’s ticket system has changed just a bit, offering selections of tickets in Tiers. Tier 1 has now passed, so grab your  Tier 2 and 3 tickets today. Tickets will not be available for purchase at the Main Gate.