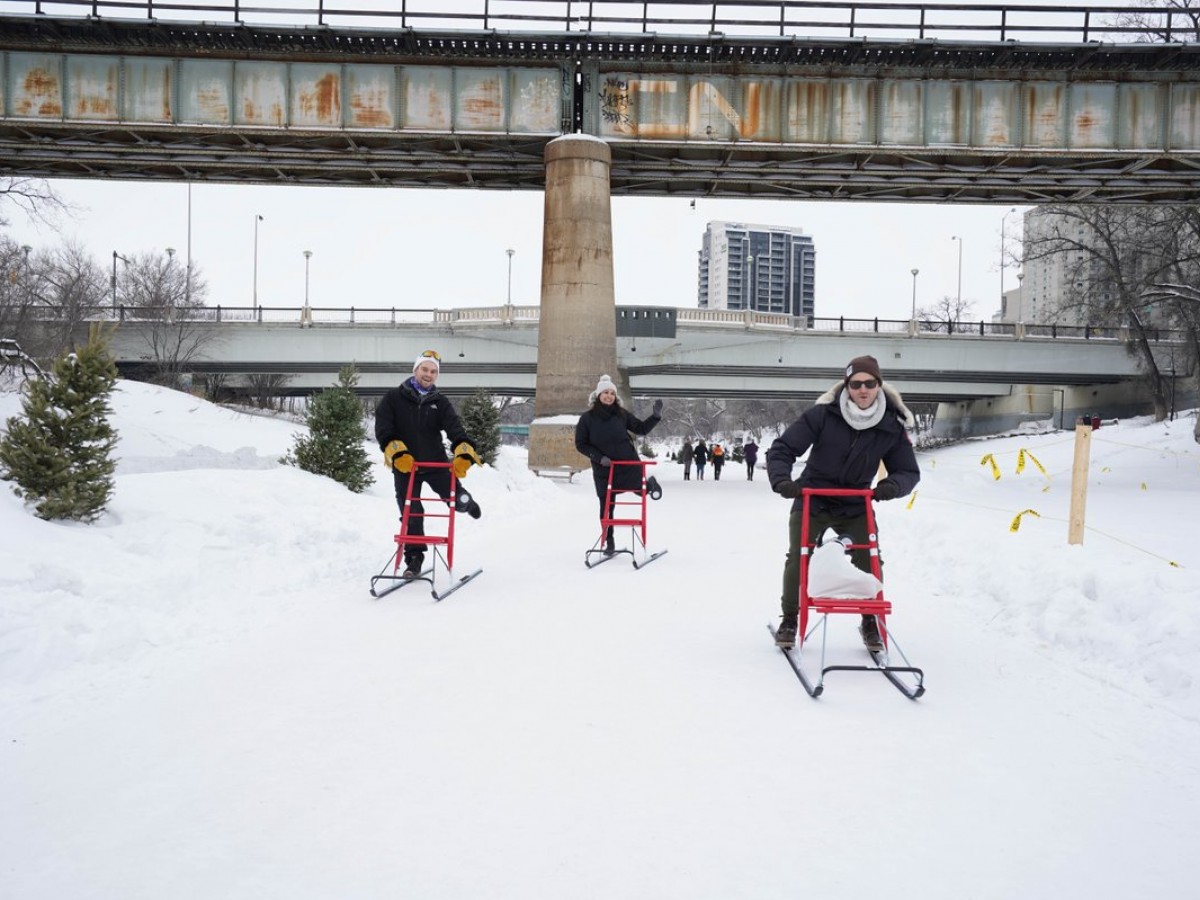 kicksledding on the Nestaweya River Trail at The Forks (Abby Matheson)

From kicksledding, to new Warming Huts and all manner of ice bikes

When it comes to exploring the Nestaweya River Trail, we’re now kicksled types.

After one afternoon out there with Type Eh Bikes on its freshly imported Finnish crafts—which are composed of two long, thin skis, attached to a red chair that has handles for you to hold—we’re hooked. And you will be too.

It’s like a combination of skateboarding and cross-country skiing, with a balancing act much like waterskiing. You use one foot to push yourself off the snow while the other is perched on the ski's foot pad, while doing this you hold the grips and use an alpine-skiing-like snowplow technique to steer. Once you get going, these thin skis glide easily over the snow, allowing you to pick up speed and get a feel for the whole process in a matter of minutes.

The chair can be both used to hold your gear—which in our case was our ice skates—while a person can also sit in it, making it a fun dating option should you be looking for this upcoming Valentine’s Day.

To rent them, contact Steven Maxted at Type Eh Bikes and he’ll get you sorted, bringing the sleds right to you at The Forks (we’d recommend a group rental, as surely there’s nothing cooler than a kick-sled posse) then picking them up when you’re done.

After people were watching us use these puppies, they are an easy sell. (“Where did you get that thing and where can I rent one?” was literally said by 50 per cent of the people we passed). So, book now as Type Eh's 30 kick-sleds are surely going to be in hot demand this winter.

What a time it is to be out on the Nestaweya River Trail presented by The Winnipeg Foundation.

If you are entering via The Forks Market you’ll be met by all the new Warming Huts, which are currently surrounding the Canopy Rink.

Local legendary performer Al Simmons’ Sounds Crazy Caboose allows you and your crew to make a whole lot of noise on some of the wackiest musical instruments you’ve ever seen (which Simmons has of course, created). There are tubes to whack with paddles for percussion (they make such a satisfying “woomp” kind of sound), strings that can be plucked like a bass and so many other fun bits like huge buttons (are those fireplace blowers?) that make the most fun circus-like sounds when pressed. We tell you, you could spend hours in here.

Simmons was asked to create this piece in concert (har har) with his son, who constructed the caboose itself.

This year, there were 100 submissions from people in 27 countries vying to have their warming hut designs on the Nestaweya River Trail, with the winning entries coming from Brazil, China and Norway. These winners are chosen via a panel of jurors, while there are also a few creations each season that are the result of invitations from The Forks. Some of these past invited artists include architects Frank Gehry and Anish Kapoor, celebrated Winnipeg filmmaker Guy Maddin and Nunavut throat-singer and author, Tanya Tagaq.

This year there are three invited designs, including Simmons’. One, called A Warmer Place, is by the University of Manitoba Faculty of Architecture. This actual warming device (admittedly, most huts are not so much about capturing or producing heat, but rather looking cool) is based on the Japanese kotatsu (essentially a heated table). It involves a wood-burning stone connected to a bench, with a two-person table and seat all connected to the stove. The idea comes as an homage to Thunderbird House, with plans to make it a permanent fixture there.

Then there is the eye-catching BLOSSOM by the Frontier School Division’s Engaged Learners program. It’s a circle-shaped benched enclosed by tall, colourful pedals that depict animals from the region, with the moon at different stages on each panel.

As to winning design submissions, “Singin’ in the Shower’ (Norway) by Luca Roncoroni (a Warming Huts’ regular, who also carved the ice instruments for Royal Canoe’s “Glacial” performance and whose CV also includes Sweden’s famed Icehotel) and Tina Soli, composed of a number of bright shower curtains, that hang in a circle from a central faucet. They are meant for you to take break from the trail to do some singing in the shower, while the curtains could technically block some wind.

The large yellow dome rising out from the ground, which is currently facing west toward The Market, is called Sunset, and is by the Sao Paulo’s Democratic Architects. Made of wood, it provides cover from the wind while its design, for locals, will be reminiscent of the stage-covers at Folk Fest. Then there’s a giant inflatable yellow hand called Warming Inflation Hands by Popper Zhu of Shanghai. Located just above the Harbour, this is literally a giant hand that will envelope you, which will surely be much loved by kids and adults alike.

Brand new to the trail (as of Feb. 4) are the addition of colouful windsocks. The Forks Windsock Exposition 2022 features nine creations by local artists, and is as diverse as the MASK (Scatliff+Miller+Murray) which showcases how masks protect from COVID; Tulle Untethered: “Come Fly with Me”–a multi-coloured tulle structure that flows in the wind by The Costume Museum of Canada; and artist Jordan Van Sewell’s Frida Blow, which is a joyful snake. There’s also a large wooden sock set right up in the Harbour from 5468796 Architecture that serves as a winter sock donation bin.

For those who don’t want to skate the trail (or kick-sled it), Kendrick’s—whose storefront is right within The Market—also has a wide range of craft right on the ice in the Harbour.

Its rental options include brand new ice bikes, which are super stylish, sturdy and even come with a light for night riding. For kids, it has a number of fun devices like ice trikes along with skate assisters in the form of mini Zambonis, playful seals and other cute animals. There are also snowshoes and fat tire bikes too. Find the full fleet here on Kendrick's website.