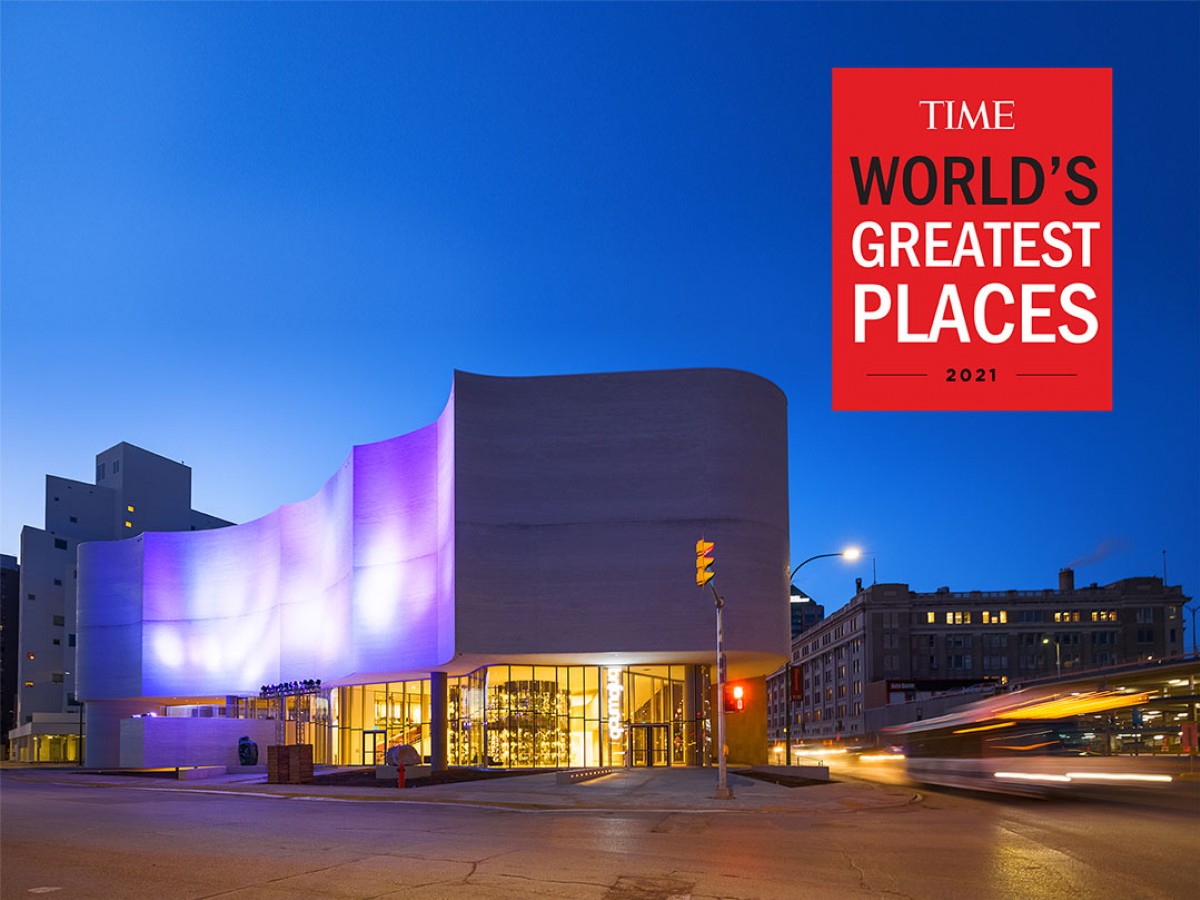 Here are a few reasons why Winnipeg is one of TIME Magazine's greatest places - along with a new contest too!

TIME magazine released its third annual ‘World’s Greatest Places 2021’ in July and Winnipeg was one of the only two Canadian cities that made the list! We already knew we lived in one of the world’s greatest places, but now it’s official.

The article celebrates the city’s culture capital, pointing out how Qaumajuq at the Winnipeg Art Gallery has added to an already robust arts scene that includes Canada’s Royal Winnipeg Ballet, The Forks’ wacky and wonderful Warming Huts competition and Winnipeg Symphony Orchestra’s New Music Festival, which has seen performances outside on the ice in the past.

Winnipeg has previously made  Condé Nast Traveler’s 21 Best Places to go in 2021 and Expedia Travel’s top spots to visit in 2020. This latest accolade also comes on the heels of Winnipeg being named World's Most Intelligent Community by the Intelligent Community Forum (ICF), which chose Winnipeg because of its citizens' innate ability to innovate and solve problems while being inclusive, highly connected, sustainable and engaging with all its citizens.

It’s almost as much hype as the Adele’s new 30 album, and it makes us want to reach back into our catalogue and close out 2021 by giving you 21 Reasons Why Winnipeg rocks (now if only there was some Adele 21 reference to tie this back to...).

Be sure to check out our new contest at the bottom of this post.

1. Strength in diversity More than 100 languages are spoken in the city, while nearly 26 per cent of the city’s population are immigrants with approximately 20 per cent of them coming to Winnipeg over the last 3 years (2017-2020).*  In 2019 alone, we had a total of 14,580 immigrants with more than 50 per cent of them coming from India, China, Nigeria, Philippines and Eritrea. As well, more than 12 per cent of Winnipeg’s CMA population identifies as Indigenous. All of these cultures are celebrated during events like Folklorama, the world’s largest and longest-running multicultural festival, while Manito Ahbee is one of North America’s largest gatherings and celebrations of Indigenous Peoples. In the West End, you can experience and savour this diversity at countless restaurants, while throughout the area you’ll also find numerous murals that showcase our history of immigration and celebrate our diversity.

2. Canada’s Cultural Cradle is fit for the Queen Our acclaimed arts and performance groups include Canada’s Royal Winnipeg Ballet, Royal Manitoba Theatre Centre, the Winnipeg Symphony Orchestra, Prairie Theatre Exchange, Manitoba Opera, Shakespeare in the Ruins, Manitoba Theatre for Young People and so many others, ensuring the stage is always set in the city.

3. Go Team! Right now on the sports front the Bombers are the defending Grey Cup Champs (and, not to jinx it, the team is looking like a pretty good bet again). The Winnipeg Jets are soaring and continue to provide the best atmosphere in the NHL (those chants and the sea of white!) while the Manitoba Moose are standing tall in the AHL and the Winnipeg Ice are currently the hottest team in the whole CHL. Come summer, the multiple championship-winning Winnipeg Goldeyes will bet back at Shaw Park—the best little downtown stadium in baseball—while Valour FC also produces a great show on the pitch at Investors Group Field.

5. Our storied facades Architecture buffs love Winnipeg! Whether it’s the circa-1890-1920 “terra cotta skyscrapers” of the Exchange District; the creations of Etienne Gaboury, which include the Esplanade Riel, the Saint Boniface Cathedral, The Mint and Precious Blood Church; or our modern marvels like the Canadian Museum for Human Rights, Qaumajuq at the Winnipeg Art Gallery and for whatever reason, this condo building that looks like a spaceship.

6. The original meeting place The Forks Market. In summer, it has one of Western Canada’s largest licensed patios and overflows with seasonal craft beer on tap. In winter, the icy, snow-covered, frozen River Trail gets lined with uniquely designed warming huts, while shops brim with local makers and diverse restaurants. It literally has something for everyone, in every season.

7. Nature at your door From birding to hiking, skiing, sailing and snowshoeing to the largest urban bison herd and an incredible spectacle of migration season in fall, FortWhyte Alive has it all, the whole year round. The whole scene, replete with lakes, aspen forests and trails covers 640 acres and is located right within the city.

8. Our Culinary Scene From notable small plates spots, to the West End’s worldly hole-in-the-walls, to bountiful bakeries using local wheat, to the thrill of honey dill... Winnipeg’s weird and wonderful culinary scene doesn’t discriminate and puts chicken fingers from a Chinese restaurant and Fat Boy burgers on a pedestal right beside our wine bars. See what’s cooking today at PegCityGrub.com

9. A solid gold experience The Royal Canadian Mint provides tours that are worth every penny (even if one-cent pieces are no longer in circulation), it's always on the money. Come see how millions of coins are produced for countries around the world, while perhaps you’ll even get to hold the $800,000 gold bar (it’s really heavy).

10. Find everything from the Prairies to planets at the Manitoba Museum With $20.5 in upgrades, a new Prairies Gallery, a fantastic Planetarium, the iconic Nonsuch Gallery and a jaw dropping collection of artifacts and fossils, including a 90+ million-year-old juvenile pliosaur, the Manitoba Museum is always ready to spark your sense of wonder for the region.

11. Public art and murals Thanks to groups like Synonym Art Consultation, that work with artists to make the city’s walls more beautiful, Winnipeg contains so many incredible murals as Woody Harrelson has recently noted.

12. A vibrant film scene Speaking of Mr. Harrelson, unbeknownst by many a visitor, Hollywood’s elite are often in Winnipeg shooting their latest films. We are frequently used as a stand-in for cities like Chicago, which is fitting as we used to be referred to as “The Chicago of the North” due to our unique turn-of-the-20th century architecture in the Exchange District. But that said, once you have a look at this list you just might think we should be vying with Vancouver for the title of “Hollywood of the North.”

13. Polar bears that swim over your head! Assiniboine Park’s award-winning Journey to Churchill is the world’s most comprehensive Arctic species exhibit of its kind. It’s so great that the zoo’s animal care specialists and research scientists (the people who take care and study the polar bears, muskox, snowy owls, seals and Arctic foxes) recently got their own show, Arctic Vets on CBC Television (which has been renewed for a second season).

14. The Hermetic Code Tour is the greatest tour of a building that you could imagine. The Manitoba Legislature Building may just look like a stately neo classical building from afar, but once you are inside you’ll see there’s plenty of trippy things afoot (and we ain’t talking politics–har har). This tour by Heartland Travel, which is often led by Dr. Frank Albo (who wrote the book that uncovered its mysteries) sheds a fascinating light on all the hieroglyphics, numerology, and symbolism found throughout this incredible building.

15. Winnipeg’s Exchange District is home to one of the most iconic and vibrant neighbourhoods in the city. Designated a national historic site, it features an exceptional collection of heritage buildings, galleries, restaurants, coffee shops, hip clothing and design stores. Whether you are meeting up with a friend in-between plays at the Fringe Festival or checking out the local art displays during Nuit Blanche, you are sure to visit Old Market Square which one would argue, is the heart of the Exchange.

16. First of its kind Designed by architect extraordinaire Antoine Predock, the Canadian Museum for Human Rights dominates the Winnipeg skyline and shines like a beacon. Inside an immersive experience that you can’t possibly shake awaits as 11 powerful, interactive and awe-inspiring exhibits gradually climb to the CMHR’s pinnacle, the Tower of Hope (which provides a stunning view of the city).

17. One Great City What do Neil Young, Fred Penner, Chantal Kreviazuk, and the Guess Who all have in common? Aside from being a folk legend, a world-renowned children’s performer, an incredible pianist and a rock band with an instantly recognizable beat once the first line of ‘American Woman’ drops– they have all called Winnipeg, home. We would be remiss if we didn’t acknowledge the talent from just outside the city like JUNO award winner, William Prince from Peguis First Nation or Carmen, Manitoba’s phenom, Faouzia.

Winnipeg’s Live Music scene continues to impress with bands like Royal Canoe, The Weakerthans, Begonia and the Lytics. Head to Manitoba Music for a full list of local artists to add to your playlist.

18. Scandinavian self-care Minutes from downtown sits an oasis where the city ends, and rest and relaxation begin at Thermëa by Nordik Spa-Nature. Renowned for its Scandinavian-style body treatments, Finish saunas, steam rooms, thermal pools and delicious dining, all of which you can do in your robe!

19. Creatives live here Winnipeg is one creative city with wonderous works of art featured in galleries throughout the city including: aceartinc., cre8ery, Graffiti Gallery, Mayberry Fine Art and Platform. Of course, there’s also the Winnipeg Art Gallery, where the amazing collection spans the Renaissance to now, in a range of mediums. The WAG is also the home of Qaumajuq, the brand-new Inuit art centre that has been lavished with praise by publications like the New York Times, Forbes, Smithsonian Magazine, and so many more.

20. A designated winter city People don’t call us Winterpeg for nothing! We embrace it and we do winter well. From festive shopping to ski and snowshoe trails, our record-setting Centennial River Trail and copious amounts of ice to glide over, we flock to the outdoors as soon as the temperatures drop. Heck, we even go to concerts like Glacial Time to watch instrumentalists like Terje Isungset who even use instruments made of ice.

21. Coming soon We won’t have to wait long for more new attractions to join the scene like the 86,000 square foot Royal Aviation Museum of Western Canada, which is set to open this spring, and the Leaf at Assiniboine Park, another architectural marvel containing biomes, one of Canada’s largest indoor waterfalls and a butterfly garden, slated to open in fall 2022.

To celebrate our placement on TIME's list, we want to see your top reason why Winnipeg is one of TIME magazine's "World's Greatest Places."

Starting on Monday, November 29, we are inviting content creators to share a brief (30 sec. max) video showcasing their favourite thing in the city on Instagram (please do it as a post, as opposed to story that will disappear).

1. Create a short video letting us know why you think Winnipeg is one of the world’s greatest places (under 30 seconds please)
2. Post it to your Instagram
3. Tag @tourismwinnipeg and use hashtag #21reasonswpg
4. You can find the  full contest details here.


The top 21 videos will be featured and entered to win the ultimate Winnipeg Prize Pack! Winner will be announced December 15, 2021 on Tourism Winnipeg’s Instagram. *Not affiliated with Instagram.