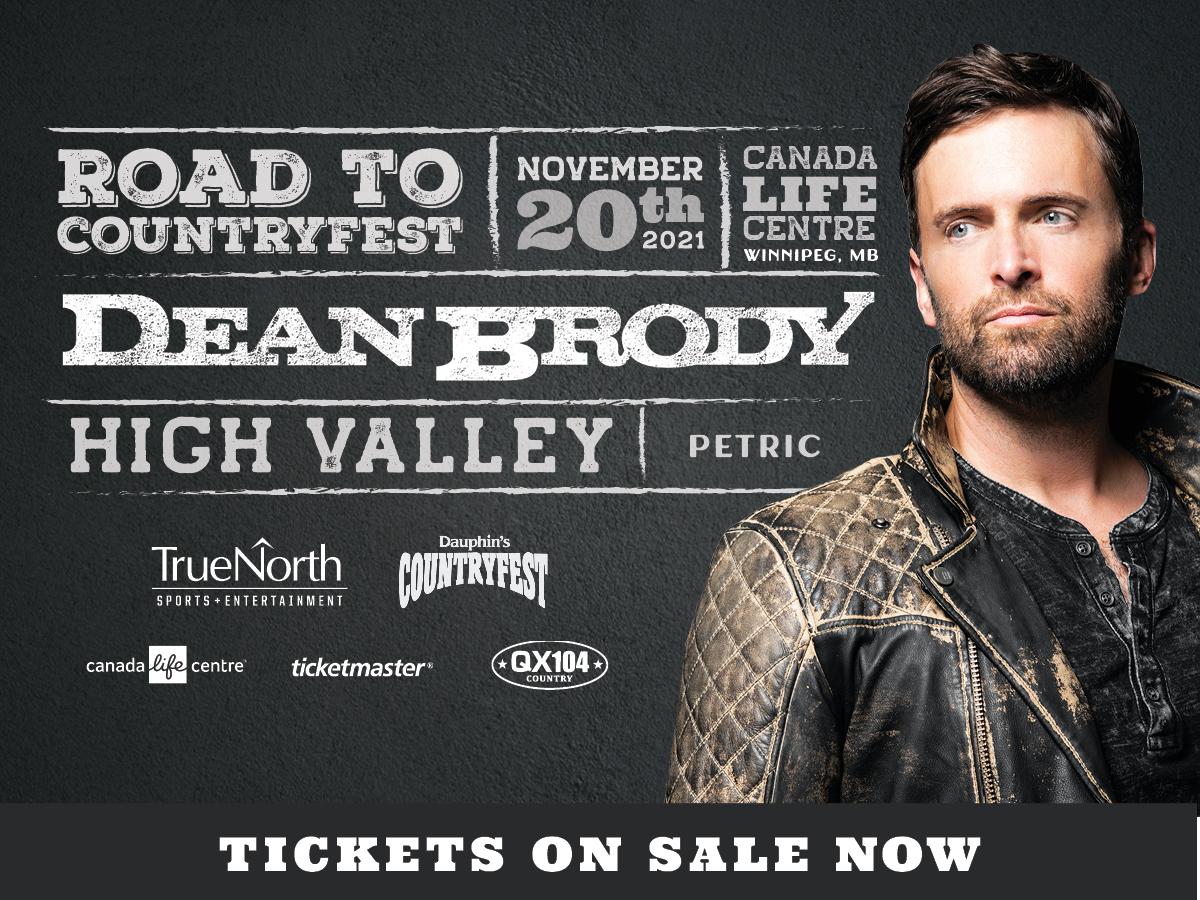 A Road to Countryfest weekend guide for Winnipeg

If you are thinking about heading to Winnipeg to see  Dean Brody “Bring Down the House” at Canada Life Centre on Saturday, November 20—this guide is for you.

First off, get your tickets now because the Road to Countryfest is going to be a big one. Brody is, of course, the biggest name in Canadian country music today; a multi-Juno and CCMA winner with countless hits like “Canadian Summer,” “Brother,” “Time” and “Bounty.” Plus, joining Dean are High Valley and hometown boys Petric (who Jets fans will also recognize from singing the national anthems on occasion).

Secondly, Winnipeg has all you crave to make it a weekend for playing, shopping and perhaps, in the spirit of Brody—makin’ friends, crushin’ cans and holding hands, so it won’t be just another “Saturday Night.”

Attractions that are even better than a bush party

If the pandemic has kept your Winnipeg travel plans in check these past 18+ months, you’re in for a treat. While the world had stopped in many ways, Winnipeg has kept moving with some new gems that have added to our world-class roster.

What’s new and located right downtown just a block or two from the arena is Qaumajuq, the Winnipeg Art Gallery’s incredible $65-million Inuit Art Centre. You’ll be drawn to its exterior that curves like snow drifts, while within you’ll see the world’s largest collection of contemporary Inuit art displayed to dazzling effect. It just opened in spring and has already been raved the world over by publications including The New York Times, Forbes, enRoute, and Smithsonian Magazine (to name but a few).

Also Downtown, there’s the Canadian Museum for Human Rights, which presents heartbreaking and triumphant stories from around the world using new media displays (and the architecture… incredible). Then there's the Manitoba Museum, which recently saw over  $20 million in upgrades. Some can’t-misses here include an incredible 90+ million-year-old juvenile pliosaur fossil, and the newly revamped and expanded Prairies Gallery, where artifacts and species from the area can be found everywhere your eye goes (including above).

Another can’t-miss experience can be had at Assiniboine Park Zoo’s Journey to Churchill. This place is the world’s most comprehensive Arctic species exhibit of its kind, and it allows visitors to experience the joy of watching polar bears swimming right over your head. Polar bears in a pool above your head? We tell you, it’s an even better collaboration than DB’s jam “More Drinkin’ Than Fishin’” with Jade Eagleson. Plus, while you’re there you may also spot some TV stars, as the crew who takes care of the bears and the other northern species are on CBC Television’s Arctic Vets (which has recently been renewed for second season).

Drinks and dining that goes down like Whiskey in a Teacup

A whole lot has happened on Winnipeg’s culinary scene in the past two years too.

Downtown, directly attached to Canada Life Place, you’ll find that Hargrave Street Market (located in True North Square) is the place to be before and after events at Canada Life Centre. The market contains some great food kiosks from some of the city’s best chefs and restaurant groups, including Saburo Kitchen (by the  Yujiro and Gaijin team), Miss Browns (incredible smoked meat plus sandwiches and awesome brunch dishes), and multiple concepts by Academy Hospitality, including the luxe Italian restaurant Gusto North and Yard Burger. Be sure to try a Yard Boy—an upscale version of Winnipeg’s iconic fat boy burger (but this one with wagyu chili with tomato bacon jam on a crispy wagyu beef patty. The addictive Yard Sauce is the perfect dip for your fries.) The market also has a craft cocktail bar while downstairs you’ll find Lake of the Woods Brewing Company’s Winnipeg location, which brews right within True North Square.

Lake of the Woods Brew Co. is now one of 20+ breweries in the city (we say 20+ because a few of them are niche operations that operate as brands within existing breweries.) You can find a number of these taprooms across the city, particularly in the Exchange District (walkable to and from the arena… hint, hint). This hip, happening area is home to the gorgeous Nonsuch Brewery (where the beer just tastes expensive and the shared plates are great) and Little Brown Jug, which has a pretty sweet room too. Right beside Nonsuch, you'll also find Patent 5 Distillery, where the acclaimed gins and vodkas are made right on-site.

More dining close to the show that we love includes deer + almond (you may recognize chef/owner Mandel Hitzer from Food Network Canada’s Wall of Chefs); The James Avenue Pumphouse—brand new and serving worldly pub fare in a location that can’t be beat (just check out the window into the old circa-1907 water pumps); Corrientes Argentine Pizzeria—where the cheese is loaded up and the empanadas are incredible; Blu Fish—always a great choice for sushi; Rudy’s—for a fun Mad Men vibe (and just steps from the arena); The Merchant Kitchen—also just steps from the arena, with a pretty sweet menu of global street food and a super lively atmosphere; and Capital Grill Broadway (excellent Americana fare).

You should also check out all the spots around Old Market Square (again, just a short jaunt from Canada Life Centre), which includes Peasant Cookery (farm-to-table French with a big room that can accommodate groups); Amsterdam Tea Room (for craft cocktails and an eclectic food menu); Cordova Tapas and Wine (the owners are both from Europe, so you know it’s legit); King + Bannatyne (for a quick sandwich and beer before the show); and Chosabi for a poke bowl or sushi burrito.

For brunch in the area, a great spot to roost is Lark (be sure to get whatever the specialty pastry is) and Clementine, which, according to The Globe and Mail, "Produces one of the most memorable brunches in Canada."

And finally, there’s also The Forks Market, the city’s original food hall. Here, you can get everything from tacos to empanadas, burgers, sushi, upscale Italian and ridiculously good pizza. Plus, the whole place is serviced by The Common bar, which has up to unique 20 wines and 20 craft beers on tap.

Roll that Barrel Out and find us in the clubs

If you are reading this and saying, "Hey, I didn’t bring out the good cowboy hat for just the concert, where’s the clubs at?" then you are in luck too.

Just down the street from Canada Life Centre at Portage and Main is The World Famous Palomino Club. Hold your horses… Is it named after the Spanish grape used to make sherry? Good lord no! This has a palomino horse right in the symbol, and once you’re in and on the dance floor you'll notice that horse is the only long face in the joint.

Another apropos post-show club downtown is the Times Change(d) High and Lonesome Club—a honky tonk live music bar like no other. There’s also the Yellow Dog Tavern, which is just one block up from the arena. It’s a popular bar for locals, particularly those who work in the culinary industry. Great dance floors and an inclusive environment can be found out downtown’s two LGBTQ* clubs, Fame (now in its new location at 110 Market Avenue in the East Exchange) and Club 200. Plus, there's La Roca, a trendy Mexican restaurant that transforms into a club at night.

For more nightlife, head to Osborne Village, just a short taxi or rideshare from downtown, or the Corydon Strip, where you’ll find numerous options that are just steps from one another.

*Please Note: Here at Tourism Winnipeg we are all about unique local restaurants, so our guides don’t feature chains.

Since you are in the city, you know some shopping is going to be in order. We highly recommend you check out unique local shops that can be found throughout The Exchange District, along the Corydon Strip, on Academy Road and in Osborne Village.

Beyond that, CF Polo Park has all the major brands and plenty of space to shop, while south down Kenaston Boulevard you’ll find Seasons of Tuxedo, which features the Outlet Collection Winnipeg, IKEA, Cabela’s and so much more.

Downtown digs that bring a Dose of Country

With the Third + Bird Christmas Market already on that weekend (sold out), Harlequin playing the Club Regent on November 19, and plenty of arts events on too, this is going to be a busy time in Winnipeg, so book your stay today.

If you are looking to walk to the show, may we suggest downtown digs like the Delta (which is connected to Canada Life Centre via a heated skywalk), The Fairmont, Alt Hotel Winnipeg, the Mere, Inn at the Forks and the Fort Garry Hotel, which we have a pretty sweet deal on here.

For a full listing of hotels, check out our hotel page. If you have kids with you, we also have a full guide to all the best waterslide hotels in the city here, along with one on all the best pools.

So what are you waiting for?  Get your Road to Countryfest tickets today because this weekend should be on the bucket list for all country fans.