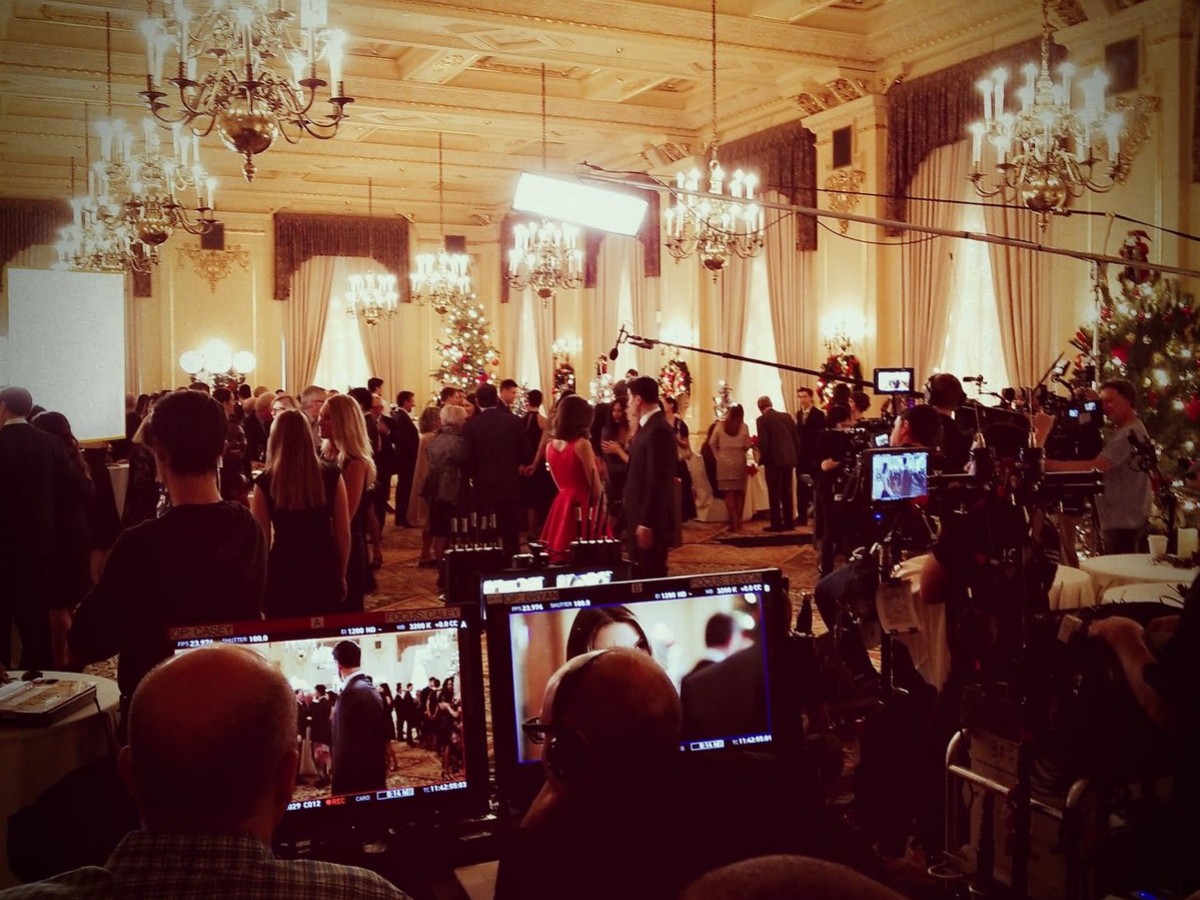 Actress highlights what makes Winnipeg and Hallmark a perfect fit, while giving us the behind-the-scenes scoop

As locals, we are well aware that Winnipeg is a hallmark setting for Hallmark (and Lifetime) Christmas films.

Throughout the spring-summer-fall months, the fake snow (often made by this fellow) frequently lands on locations like The Forks, stately houses in River Heights and on the streets of The Exchange District as production companies create the modern fairy-tale fare that will be a welcome reprieve from our current, Covid-themed holiday season.

So many of these films are airing now and throughout the holidays - literally 24/7 - on W Network Canada as part of Hallmark Channel’s Countdown to Christmas, while Lifetime Network Canada has your nightly cravings covered too.

In 2019, we were treated to such strong Winnipeg-filmed fare as Two Turtle Doves, complete with family heirlooms, an adorable girl, Christmas miracles and The Forks. And let’s not forget The Christmas Club, a zesty number about fate and second chances featuring Olivia Bennet walking the streets of The Exchange District where it was filmed in summer 2019.

This season, be sure to set your PVR on Lifetime Canada and W for films like Always and Forever, Snowed Inn Christmas, No Time Like Christmas, Christmas at the Plaza and A Christmas in Tennessee, which were all shot here.

But what makes Winnipeg such a hallmark location for Hallmark films?

“Winnipeg, when you are not in Winnipeg, is known as the Christmas capital of the world,” said Hallmark star, born and raised Winnipegger and all-round firecracker, Melissa Elias.

“That’s one of the only things people know about us in Los Angeles - that, and we are one of the first cities in the entire world to have a gay mayor – which is awesome, as we were so progressive that way and that’s good to be remembered for," referencing Glen Murray.

“What happened was the word got out about the really amazing crews here, and that we are really hard-working, that we are wonderful and have amazing locations that can double as New York and Chicago and now people are lining up to shoot movies here… We also have a really great film industry in Manitoba and a really wonderful tax credit. And what they realized with the Hallmark movies is that we are the centre of the universe. So they can film a lot here – and we have figured out how to film here all year long."

Fake snow and all.

On top of making frequent appearances in Hallmark and Lifetime films, Elias is also a producer, including 2019’s Rosie, a short by Destry Allyn Spielberg whose father is yes, that Steven. Elias has been on the screen scene since she got her break on YTV’s 2030 CE back in 2001.

Locals will recognize her from Falcon Beach, Global’s 2006 drama and she will be all over televisions this holiday season in films including Once Upon a Christmas Miracle (2018), Amazing Winter Romance (2020), On the 12th Date of Christmas (2020), and the highly-rated Lifetime film Radio Christmas (2019).

Being an expert on the subject, we asked her for some anecdotes on these films so you can turn to your family members this season and say, “You know, Letterkenny’s Tyler Hynes is actually in The Fort Garry Hotel in this scene. Doesn’t it look magical? These people aren’t in Tennessee at all.”

Hallmark Channel says: “When journalist Julia goes back home to find inspiration, she discovers her childhood friend has built a giant snow maze which prompts her to find her way to true love. Stars Jessy Schram and Marshall Williams.”

Melissa says: Oh my gosh, this was the fastest movie ever made! It was freaking amazing.

First of all, I was worried that we weren’t actually going to get to film at the actual snow maze [at Amaze in Corn]. When I booked that movie, I was looking at the weather and it was looking good… but we were having one of those transition periods in winter. So, it was really cold at night but sometimes during the day it would get warm and start to melt a bit of snow. Halfway through that movie, the snow maze started to umm, bend if you will? It was bending in certain places... but you’d never know because the crew was so amazing.

I had such a great time working on that movie – but I did refuse to go in that snow maze by myself because that is one of my worst nightmares. I’d be the one person [who enters] who they would never find again…. Both that corn maze in the summer and the snow maze in the winter are equally intimidating to me because I am only five feet tall.

On the 12th Date of Christmas (Its premiere on W was on November 8, where The Devonshire Luxury Hotel is actually The Fort Garry Hotel)

Elisa says, “Okay, that one was my most recent one and thank god that one was filmed in Winnipeg. Sidebar: My nana passed away the first day I filmed that -- so I was a wreck. If I were in any other city that didn’t know me and didn’t embrace me the way our crews do here – it would have just been a nightmare day for me but they were so good to me and I thank them with all of my heart.

This was the first movie we started making after COVID. We filmed all over the city for this one… including a loft downtown where Jennifer [played by Mallory Jensen] is making all the cookies.

Everything was beautiful and seemingly perfect. When you got to the set, no matter what nightmare was on in the real world – be it COVID or nana or whatever – it was just awesome to look up and be like, ‘I’m in a Christmas movie with Mallory Jensen in someone’s apartment in Winnipeg!’" she says.

Then adds, "Here’s the thing, sometimes when you are on location in someone’s house – for example, when Jordan Peele filmed Us at my house in Pasadena, they took out every bit of furniture and redid the whole thing. For these movies, they don’t really do much… So I opened a cupboard [during that scene] and you are like, ‘Oh, this isn’t a set cupboard, this is actually someone’s things.’”

Once Upon a Christmas Miracle

Hallmark says: “After receiving a medical diagnosis before the holidays, Heather Krueger discovers she is in urgent need of a life-saving liver transplant. Facing incredible odds against finding a donor, she’s shocked when a stranger, Chris Dempsey, volunteers to donate half his liver to her. As Heather and Chris get to know one another and their families before and after the transplant, they form a deep connection and begin to wonder if the closeness they feel goes beyond the special connection between organ donor and recipient. The two must decide if Chris’s selfless act is the beginning of a beautiful, true love story." Starring Aimee Teegarden, Brett Dalton and Lolita Davidovich.

Elias says: “They brought the actual couple from Chicago that the movie was based on to L.A. because that movie won all of the Hallmark awards that year and it was voted best Hallmark movie and we had a huge red carpet event… We helped Heather [Krueger, the wife who the filmed is based on] get her makeup done and get her wardrobe, then we took her to the red carpet event because we wanted her to have “a very Manitoba experience.” So we took her under our wing and were like, ‘This is what you do here, this is what you do there.’ I learned that from Manitoba where people pass along what the little secrets are, where the best restaurants are… And she had an amazing time.

Radio Christmas (ranked by Elle as being the third-best Lifetime Christmas film of all time! It prominently features the Global Winnipeg studio at the top of 201 Portage Avenue)

Lifetime says: “Desperate to increase her numbers and get promoted outside of Radio Christmas – a year-round Christmas station, Kara seeks to uncover the identity of the town's Secret Santa, an anonymous benefactor that saved all of Bethlehem's Christmas festivities.”

Elias says, "This was my second Lifetime movie, and it was shot at the same time as Amazing Winter Romance. What I loved about it was I was walking onto the set at the TD Centre [201 Portage Avenue] and I immediately thought, ‘Wow, I could be in New York right now because the views [of The Exchange District] were outstanding.'”

Elias says to also look out for Snow Kissed, which is currently being shot in the city. “It features the most adorable girl in the city named Jiana Menezes. It’s her very first Hallmark movie and we [Winnipeg] are doubling as New York and they are shooting at Pineridge Hollow. It also features first time film costume designer Nathan Michael Fletcher, who I first met on the set of Once Upon a Christmas Miracle” said Elias, noting that it will be on television within a month.

This interview has been edited and condensed for formatting purposes.

Make waves with your next staycation at these Winnipeg hotel pools