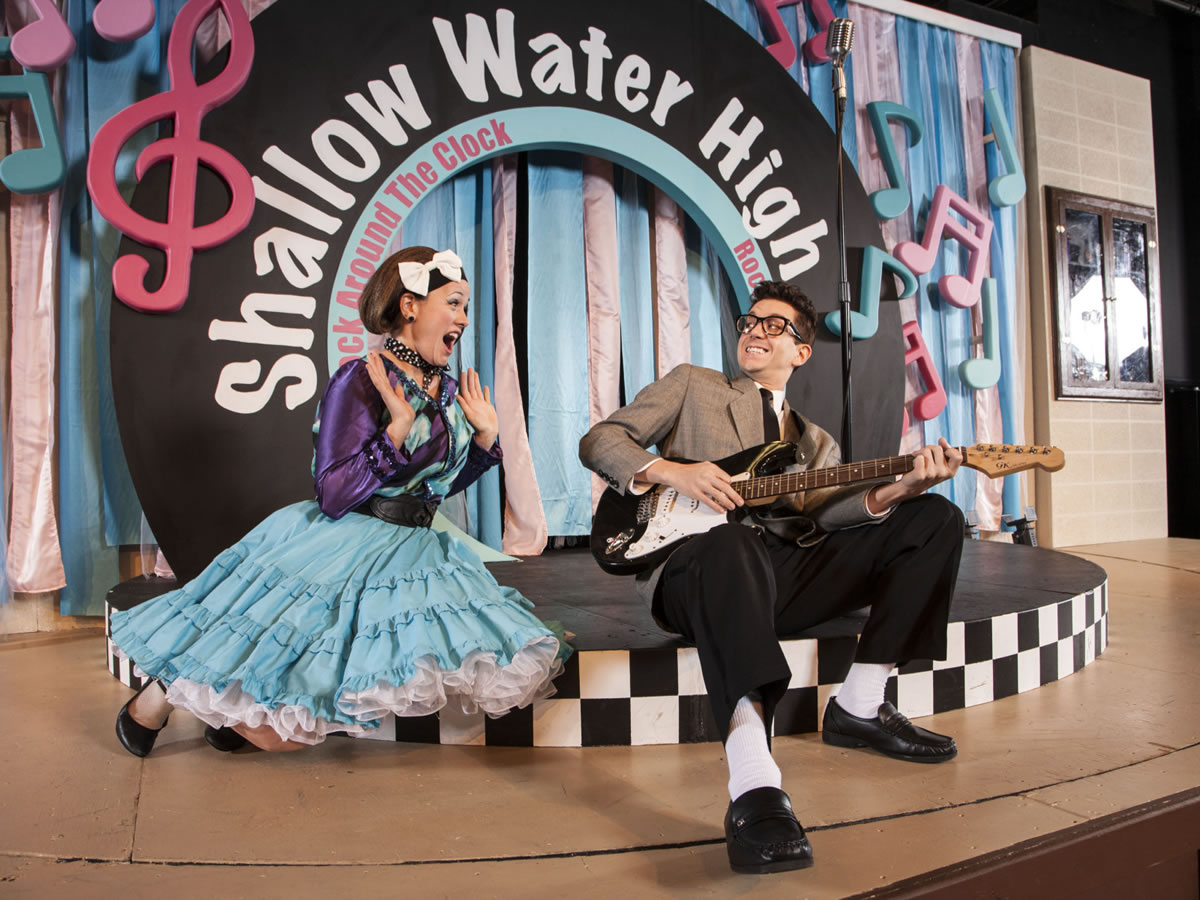 Admittedly, before last night it was a foreign concept to Missus and I (the term usually makes me think about the Medieval Times scene in Cable Guy) but little did I know how entertaining it could be, even without Jim Carrey trying doing his best Silence of the Lambs with chicken skin on his face.

Last night, for Lil's fifth birthday Granny and Gramps (my mom and dad) took us all out to Celebrations, "Dinner Theatre with a Difference" for a night of food and festivities. Today I will now admit, my old man may have a convert on his hands because Celebrations doesn't just turn up the show to ten. Oh no my friends, they really commit; when it comes to putting on a show the dedicated cast and crew at Celebrations is like Spinal Tap -- they crank it up to 11.

Lil' for one was loving it from the moment we walked through the Canad Inns Fort Garry lobby to the Celebrations' host stand. We were met at the door by a comedic young fellow who was a pitch-perfect, in-the-flesh version of SpongeBob SquarePants (which, along with Adventure Time, is Lil's favourite show). I tell you, I don't even think a brick to the face would have made this chap break character. His body language, between his rigid walking on his heels and his rendition on stage of "La Bamba" -- replete with SpongeBob dance moves -- would've even put a smile on Squidward's face. 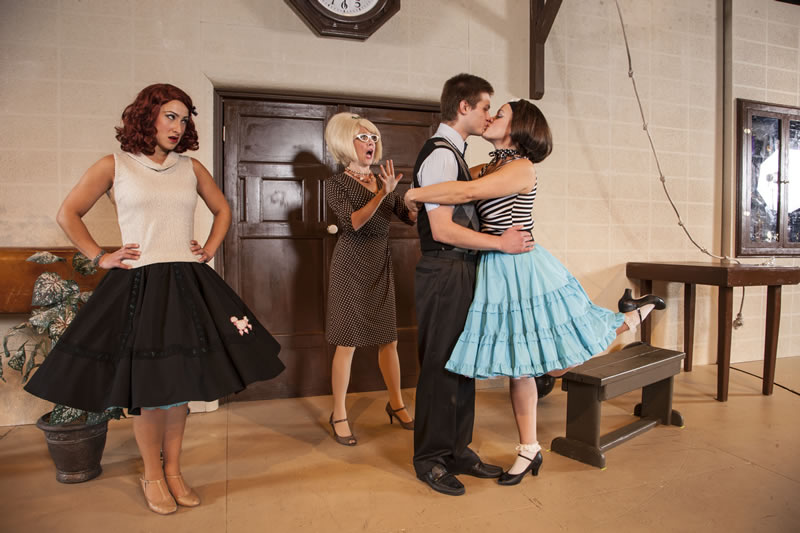 The show we attended was Oh Boy, Buddy Holly! which Granny Peg was quite excited about as she loves his tunes. And she was not disappointed in that regard, because over the course of the evening we got all the hits from "Peggy Sue," to "Rave On, to "Everyday."

Heck, mom even got some bonus tracks from the The Everly Brothers, so the old gal was singing along all night.

Taking place in the late 1950s, and told through a series of flashbacks centred around the inhabitants of a fictitious small town in Manitoba, Oh Boy, Buddy Holly! tells the story of the final graduating class of Shallow Water High. Drawing on the sentimentality of the school's imminent closure (the town is too small to maintain a high school), many seniors from the graduating class wrote letters to their favourite rock stars in hopes they will come perform at their last dance.

But you won't really need to know about the plot, because at Celebrations it is all about just letting the zany action bath over you. As I alluded to previously, everyone working the room is in character, from your servers -- who were all members of the graduating class and who had bit parts on stage -- to the main couple performers who are always venturing out into the audience.

And there is certainly audience participation, but not of the embarrassing variety that you get at similar shows you may have witnessed at all-inclusive, family-orientated hotels.

For instance, there was a brief moment of mortification on Missus Peg's face when our server said, "Come on, we need more dancers on stage," then asked her to join in for the next song. Of course, she could not say no, especially with Lil' egging her on (it was her birthday after all). So next thing you know there is my wife, jiving like no one's business on the stage, having a good laugh, while the rest of us were cheering her on. It is all in good fun after all. 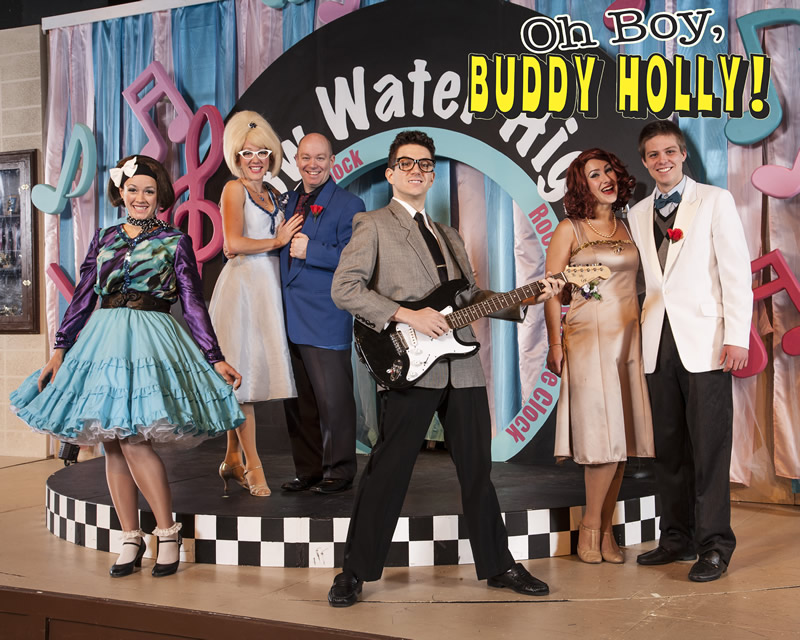 Oh Boy, Buddy Holly! plays at Celebrations until January 17, 2015, while in the new year there are even more promising shows including ones centred around Dirty Dancing (January 23-March 28), an Elvis-themed one called Once Upon a Time in Graceland (April 30-May 30), and one based upon the TV show Modern Family (June 5-August 8), with the plot apparently taking place on the Titanic II.

As you can see with the upcoming shows, the crew at Celebrations likes to mix genres, settings and characters, so they can tackle all manner of popular culture.

And that's what resonated most with me during this Buddy Holly themed show. My favourite part hands down was their nod to the now classic Canadian show Trailer Park Boys, via one of the character's grandfathers telling the story of how he first met his wife. The grandfather was a spitting sound and image of the Trailer Park Boys character Bubbles, while his buds pulled off the Julian and Ricky parts rather well too. But the actress who played the ode to Mr. Lahey -- that being Aimée Beaudoin, who also played Peggy Sue Q -- was a flat-out hilarious scene-stealer whose impersonation of the drunk Jim Lahey had me laughing pretty hard.

All in all, it's kind of rare to get out with both the kid and the grandparents and we had a pretty good time. And best of all for mom and dad, they treated us to this special night out. Tickets were $59.95 for us adults, $44.95 for the seniors, and $30.95 for Lil' (children 12 and under), which, when you consider you get four courses of food (soup, salad, an entree and dessert) along a three-act bout of musical theatre is quite the deal. Plus, they even sell packages for regulars like my parents, who, as I mentioned, haven't missed a show the past couple years.

So if you are looking for your next unique and special night out, do your celebrating and Celebrations. I know the whole Peg family will be back.