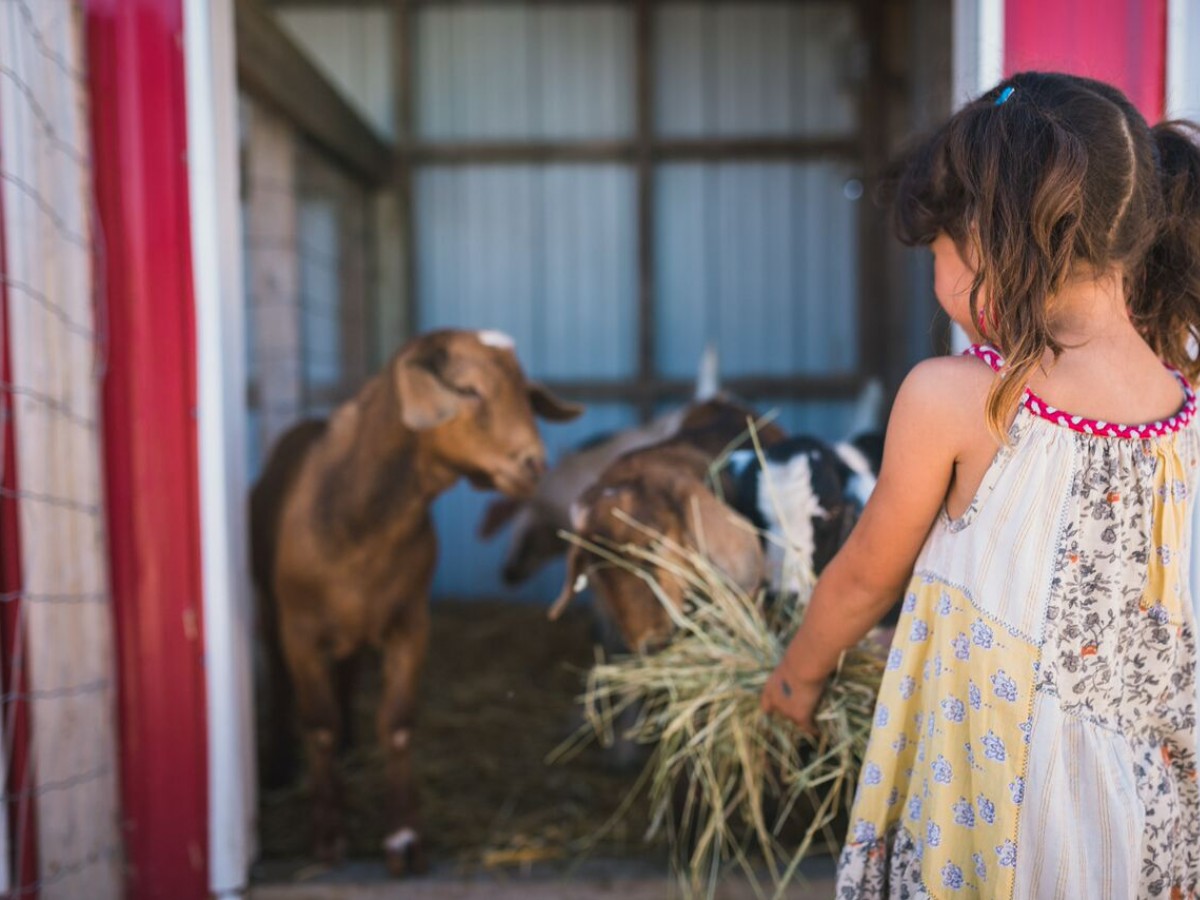 The petting zoo at A Maze in Corn is home to goats, alpacas, calves and kittens. / Photo by Black Chair

​Seek out creature comforts in Winnipeg, a wildly nice place

It’s not only children who love animals. Everyone loves a critter that is soft and fluffy, like a bunny; has enormous eyes, like a llama; is both terrifying and cute, like a polar bear; or is just oddly small, like, say, a miniature donkey, the animal equivalent of a bonsai plant. How does that happen?

We digress. Seriously, Winnipeg’s urban places and spaces close to the city have faunal experiences that will expose you to critters in a nice and not too wild way. Get out and see some!

Fur example, you can cuddle up to lambs, alpacas, calves and kittens at A Maze in Corn's petting zoo. Throughout August and September, the farm also puts on a sunflower expo spanning eight acres and featuring more than 40 varieties of sunflowers.

From birds to bears and bunnies to goats, here are a few more furred and feathery options to find:

You don’t have to be a binocular-toting nature lover to appreciate unusual bird “tricks.” For something different, learn about the relationship between the Peregrine Falcon and humans at Parkland Mews, located just south of the city. Examine falconry equipment, learn to swing a lure for recalling a trained falcon and hold a live Peregrine Falcon on your gloved arm.

Robert and Nancy, who run the place, are happy to host your group at the venue. Simply contact them to tailor your visit for two to 35 people. Cost is determined by group size and wingspan.

At FortWhyte Alive, fall brings thousands of migrating birds, Canada geese and ducks. Because of its location in the middle of Winnipeg and because you can rent everything from binoculars to wagons to cruiser bikes, FortWhyte Alive is a destination for birding enthusiasts as well as those who enjoy a spectacle of a bird-filled sky.

Summer is too early but come fall, look for a goose that looks like it is flying upside down or flipping end over end in the air. They rapidly twist and roll their bodies almost 180 degrees while keeping their wings straight to descend quickly or avoid predators or both. This is called whiffling.

North of Winnipeg, closer to Stonewall, Manitoba, Oak Hammock Marsh Interpretive Centre has all kinds of flyers. It's one of North America’s most significant birding hotspots, featuring a restored prairie marsh, aspen-oak bluff, waterfowl lure crops, and some of Manitoba’s last remaining patches of tall-grass prairie.

The centre is closed right now but will open for fall migration September 17 to October 18.

You may roam the 30 kilometres of trails on your own, but booking a marsh tour or special tour with a naturalist will help you identify more bird and animal species here, and you'll learn interesting details like how an American Coot swims like a duck, but does not have webbed feet like a duck. Wacky.

Hypercarnivorous bears dog paddling overhead as you walk through the zoo’s underwater walk-through tunnel is simultaneously amazing, hilarious and calming.

Polar bears are completely at home in water. Remember, they are called Ursus maritimus, or sea bears, as they spend much of their lives in, on or around an ocean.

If not Churchill, the next best place to witness polar bear behavior is at the Journey to Churchill exhibit at Assiniboine Park Zoo.

Better yet, call for updates on four guided tours for six to 12 people including one Canadian Signature Experience that immerses you into the award-winning Journey to Churchill exhibit, a remarkable way to discover the wildilfe, geography and culture of Manitoba's stately north. And, it is one of Winnipeg's must-see attractions.

You’ll be led by a knowledgeable guide, meet with a member of the animal care team and go behind the scenes in the laboratories at the Leatherdale International Polar Bear Conservation Centre.

Warning: Your kids will want to visit Churchill next.

Programming is restricted right now until September, but roaming around on your own early in the day or later in the evening is best for bear and animal viewing.

There is nothing nicer than cuddling a bunny. People: we get that you have too many rabbits in your backyard, but at Deer Meadow Farms, you may pet the soft and furry hoppers, known to reduce stress, lower blood pressure, and put you in a good mood. We all know someone who needs to cuddle a bunny right now. Staff is at the ready to answer questions and fend off evil bunny snatchers.

Deer Meadow Farms has a Petting Farm and a special enclosure called BunnyVille. Bunnies! Of course, bunnies, but also a town of miniature buildings to hop in and out of.  Not you, the bunnies.

A family could spend a day at this worth-the-trip destination. Besides the obvious joy of cuddling a bunny, children can learn about agriculture and how farm animals produce food, or, ahem, are the food. Ask about goat milking in season.

What's more, you can hop on the wagon train, which takes you through the farm's wild game preserve to see a rescued herd of fallow deer. Much smaller than our native white tailed deer, fallow deer are native to Europe and have several color phases ranging from dark brown to spotted to white.

Faunally, if you’re feeling the animal attraction, these nice hotel deals make staying overnight an easy decision. Add #WinnipegNice and #CanadaNice to social posts for the chance to be featured.