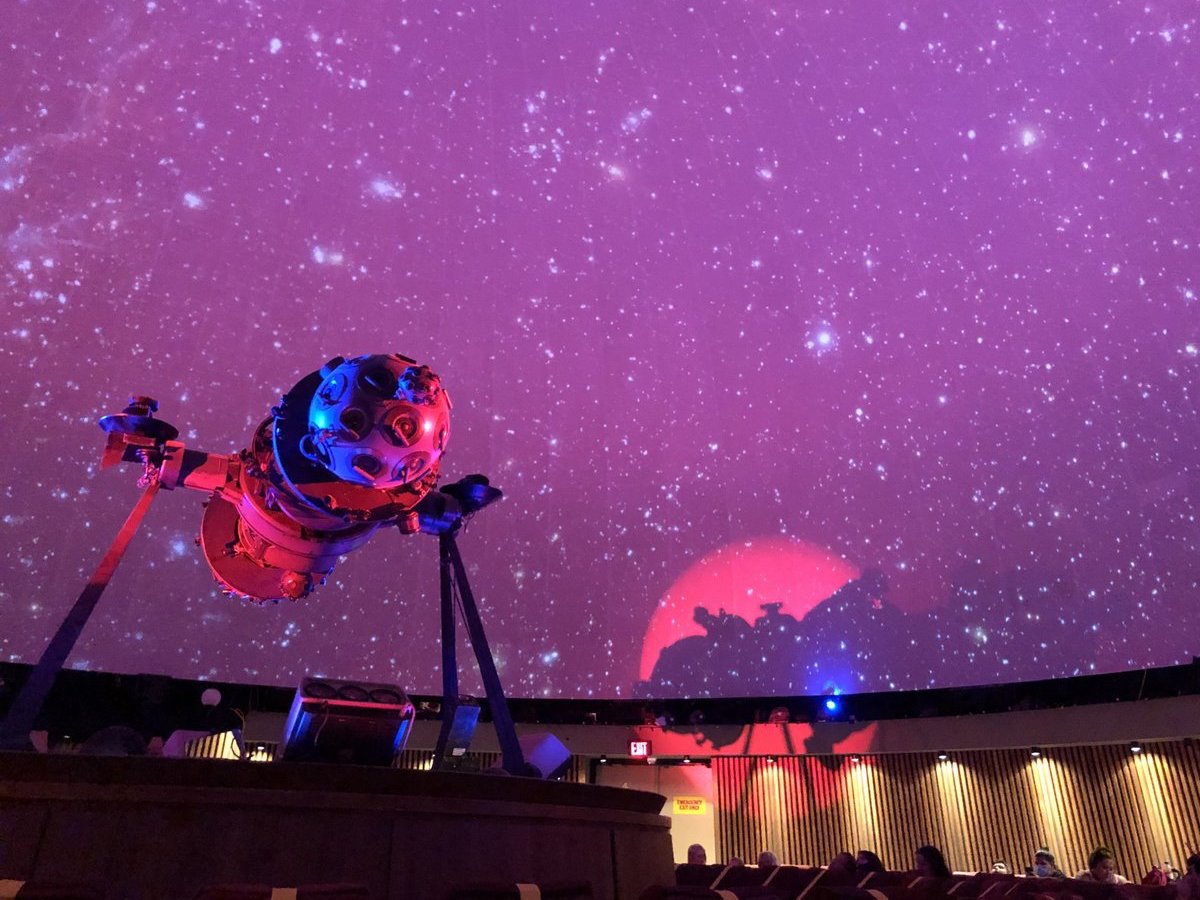 Space out and settle in as the Planetarium brings you under Manitoba's night sky any time of day. (Photo: Carly Peters)

​Explore the day away at the Manitoba Museum and Planetarium

My kids and I just came back from an incredible trip; no quarantine required. We spent the afternoon at the Manitoba Museum travelling through time, exploring Manitoba’s human and natural history. With detailed visual displays and auditory experiences, everyone can find something that fascinates, inspires, and connects them to the province we call home. Plus, there’s a really rad big ship.

Even at 13, my oldest loves a good scavenger hunt and quickly snapped up a (sanitized) pencil and sheet in order to find some of the Museum staff’s favourite artifacts and displays dotted throughout the 10 permanent galleries. Don’t worry parents of little ones, each item within the museum is well marked, making it fun for everyone to find things.

With the Orientation Gallery currently under renovation, you actually start at the real beginning with the Earth History Gallery – a favourite of my 10-year-old. Every visit he plunks himself down to watch the cephalopods, trilobites, and corals float through the large video panels that project scenes from the Ordovician Sea, which covered the province a half-billion years ago. It’s hard to imagine some of the coolest marine reptiles, like the plesiosaur and mosasaur, once made Manitoba their home. Fossil replicas and other info about additional Cretaceous creatures throughout the exhibit reminds us we had our very own version of Jurassic Park.

It’s a quick jump from the once tropical-like waters to the frozen ice of the Arctic/Sub-Arctic Gallery, where everyone stopped to watch day turn to night over a polar bear and his dinner of seal in this timeless display. A highlight here is the well preserved winter wear of the Caribou Inuit and Caribou-Eater Chipewyan who made their home in Manitoba’s barren northland.

The Museum is incredibly adept at depicting what life was like for the province’s First People. This is especially apparent in the Boreal Forest Gallery where find yourself alongside a Cree family preparing food by a trickling stream; the man is rock painting, while the child plays with the family pup. Their neighbours, a pair of moose, peer at them from the other side of the display. The boys spent a surprising amount of time looking and pointing out all the birds and creatures hidden in the display’s grasses and trees.

Watch out, every kid stops on the ramp out of this exhibit to look at the floor-to-ceiling scene with adorable wolf pups playing under their watchful mother’s eye; just another representation of family life in the forest.

But let’s be honest, we all really came here to see the big ship that has just returned from trading furs in Hudson’s Bay. The Nonsuch Gallery never fails to impress. Considered one of the finest replicas in the world, she’s earned her rest in the Museum’s moor after her journey from England to her home in Manitoba. While you can’t currently board the ship – the proper sanitation procedures would damage the artifact – it’s a great opportunity to explore the replica wharf, lined with businesses (we all liked the fancy hat shop) and to take a moment to listen to the audio adventure tales being told in the tavern. Oh, and there’s canons. Try to stop kids of any age from pretending to barrel a ball at the ported ship.

There’s plenty more fashion, furs, and other artifacts that played a role in cementing The Hudson’s Bay Company’s trade legacy in an adjoining gallery.

We were really excited to check out the new Winnipeg Gallery, which features over 100 artifacts never before seen by the public that explore the rich history of our city and underscores what makes us unique. The boys pointed out some familiar faces along The Personalities Wall - Dancing Gabe of course got the biggest response – and we all learned a little more about some of the incredible individuals that helped to shape the city.

The new exhibit seamlessly flows into the Urban Gallery which depicts Winnipeg in 1920. Until early 2021, the mini downtown has actually taken one small step back in time to 1919, dropping you right in the middle of the Winnipeg General Strike. The tumultuous stretch shut down the city for 40 days; we all agreed the closed signs on shops were a little more relatable after coming through the past few months. You can eavesdrop in the doorways of different businesses and residences to listen to Winnipeggers discuss their role during this divided time.

The highlight for both kids was the old movie theater which shows black and white Charlie Chaplin, and Laurel and Hardy films, whose physical comedy never fails to have everyone in stiches. Guess even in 1919 a good film was used to take your mind off current events.

As we left the Museum Galleries, my oldest mused maybe one day other families will come to the to see a display about how people live through 2020. “Ugh, that would be a scary one,” replied the youngest.

To our delight, the Manitoba Museum’s Planetarium was open and we jumped at a chance to take in a show that covered what is currently visible in the Manitoba night sky. Under the big dome we settled in to the socially-distanced seating and were transported to the Milky Way, Jupiter, and Saturn. Our Planetarium Astronomer also walked through the summer constellations, marking stars that can be seen with and without a telescope, before sending us back to downtown Winnipeg.

Make sure to give yourself the better part of the day to get through all the galleries and take in a show at the Planetarium. Fortunately, the Manitoba Museum’s August hours are now extended to Thursday-Sunday, 11 a.m. to 5 p.m., so there’s plenty of time to explore. Planetarium shows run at 11:30, 1:30, and 3:30.

Currently, you can also save 15% by bundling tickets for both the Museum Galleries and Planetarium in one visit.