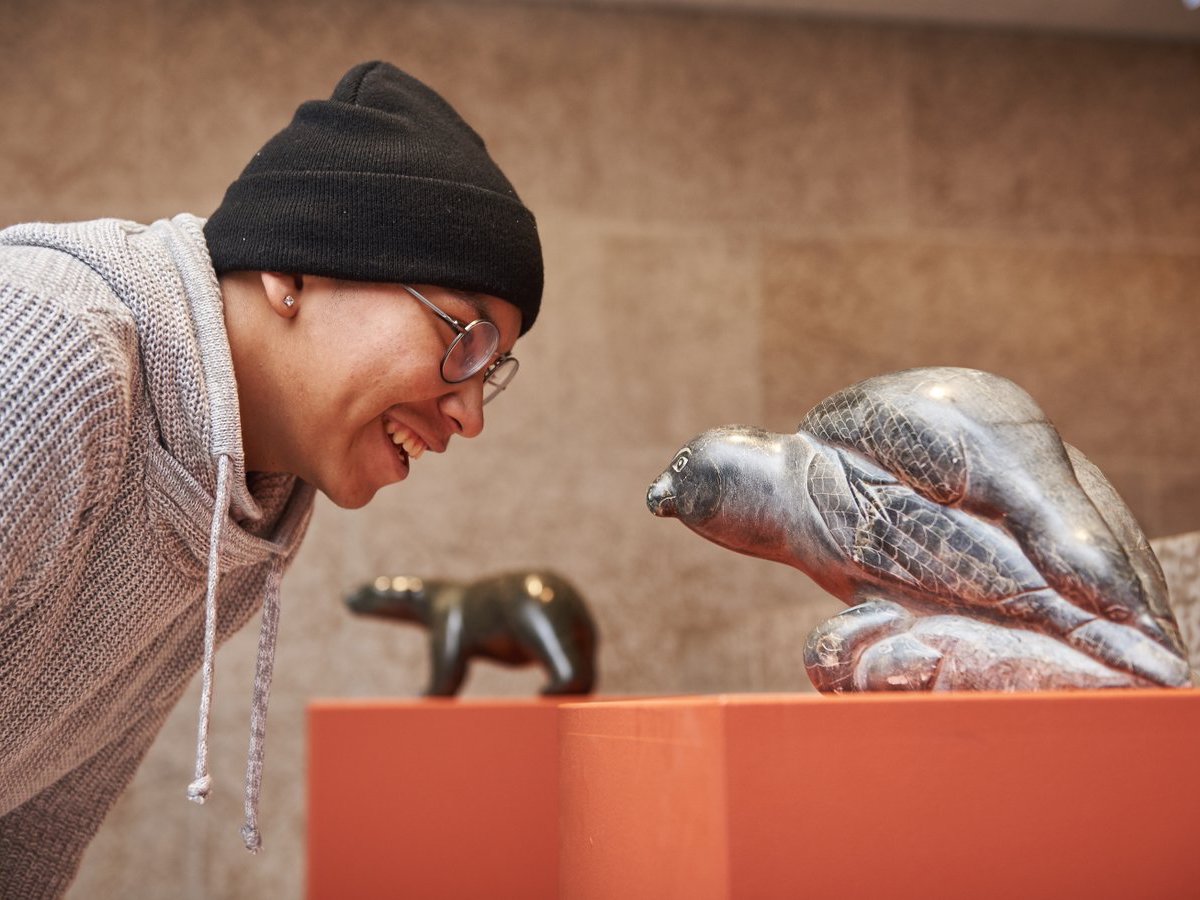 You know The Forks is a fun place to take out-of-town visitors and grab a bite to eat outside. The Forks, however, as a water-based junction bisecting the continent in all directions, is one of the most historically important places in Western Canada. Sites such as the Oodena Celebration Circle, a three-metre deep bowl once filled with artifact-rich soil, pays striking homage to the Indigenous people of the area who used the spot as a gathering place for 6,000 years.

Take in Niimaamaa, a big, bold stylized sculpture of a pregnant woman. This 30-foot outdoor piece by artists KC Adams, Jaimie Isaac and Val Vint represents motherhood, Mother Earth and new beginnings. Niimaamaa means “my mother” to Cree, Ojibwe, and Métis speakers. Realize the dense history of Indigenous people in Manitoba through stories and legends taking in these monuments and more on a 90-minute Oral History Walking Tour.

“They gave everyone $50 and then they kicked them out. Then they built a big mall and the property developers got to make money off of it.”   - Lawrie Barkwell, Louis Riel Institute, quoted in The Uniter

A five-metre tea kettle in the middle of Winnipeg is big enough to hold water for 250 people, making a statement about the lack of clean water in Rooster Town in the early 1900s and an ongoing problem some Indigenous communities still face today. At the Beaumont Station on Winnipeg’s Southwest Transitway, the kettle is hard to miss. Rooster Town Kettle acknowledges that a Métis community housing 250 people once stood here on the outskirts of Winnipeg from 1901 to 1961. As plans for Fort Rouge took shape, the families were expropriated from their boxcar lumber homes by the City of Winnipeg. Outlier Métis communities were common in parts of Canada, but are relatively unknown—or forgotten—shards of history. The kettle, designed by Métis artist Ian August, denotes the strong sense of community in Métis households, where hot tea and a visit were always on offer. The town’s name likely came from seasonal railway workers who roosted there.

Over the last few years, initiatives have contributed to indigenizing the city with large scale, public art created by Indigenous artists.

Star Blanket and other Murals

At least five buildings in Winnipeg, including one at 511 Ellice, appear to be blanketed fittingly by Star Blanket murals. To learn more about this and other stunning pieces by Métis artist Kenneth Lavallee and others, visit the Star Blanket Project.

Some murals, like the one on a railway pass on Winnipeg’s Portage Avenue, serve a higher purpose. Tom Andrich’s mural shows the faces of 10 missing and murdered Indigenous women.

Read more on murals here including The Fancy Shawl Dancers on the Sutherland Hotel and the Louis Riel mural on the side of the Nonsuch Brewing Company.

The Winnipeg Art Gallery holds in trust more than 13,000 pieces of contemporary and traditional Inuit artworks made from walrus tusk, whalebone, tapestry, paintings, or ceramics.

Teekca’s Aboriginal Boutique at The Forks -- probably has the widest selection of Indigenous-made or Indigenous inspired items, from popular beaded moose and cowhide moccasins to star blankets to teas that make you a star under the blanket. Dream catchers, bear oil products, caribou tufting, silver and southwest turquoise jewellery, soapstone carvings and more are cool to peruse and even cooler to buy.

Anne Mulaire – is an award-winning Canadian fashion designer of French Métis descent with a desire to empower the women who wear her clothing.

Born in St. Boniface and raised to embrace her Anishinaabe and French heritage, Andréanne Mulaire Dandeneau is the great-great-great granddaughter of Catherine Mulaire, who was born in 1843, the daughter of a Voyageur and the first rural Métis teacher in the Red River Settlement.

Roam the shop on the third floor of 421 Mulvey Ave East and feast your eyes on beaded Fléchée belts, Spirit of the North bamboo bumwarmers and stunning Jean Louis blazers and embroidered blouses in her Heritage collection.

From Peguis First Nation, chef and owner Christa Bruneau-Guenther wants visitors to experience modern dishes rooted in traditional First Nation foods at her West End eatery Feast Café Bistro. Christa's recipes have been featured in Canadian Living, Chatelaine, and on Food Network Canada. Check out the art on the walls too.

These nice hotel deals make staying overnight an easy decision. Add #WinnipegNice and #CanadaNice to social posts for the chance to be featured.