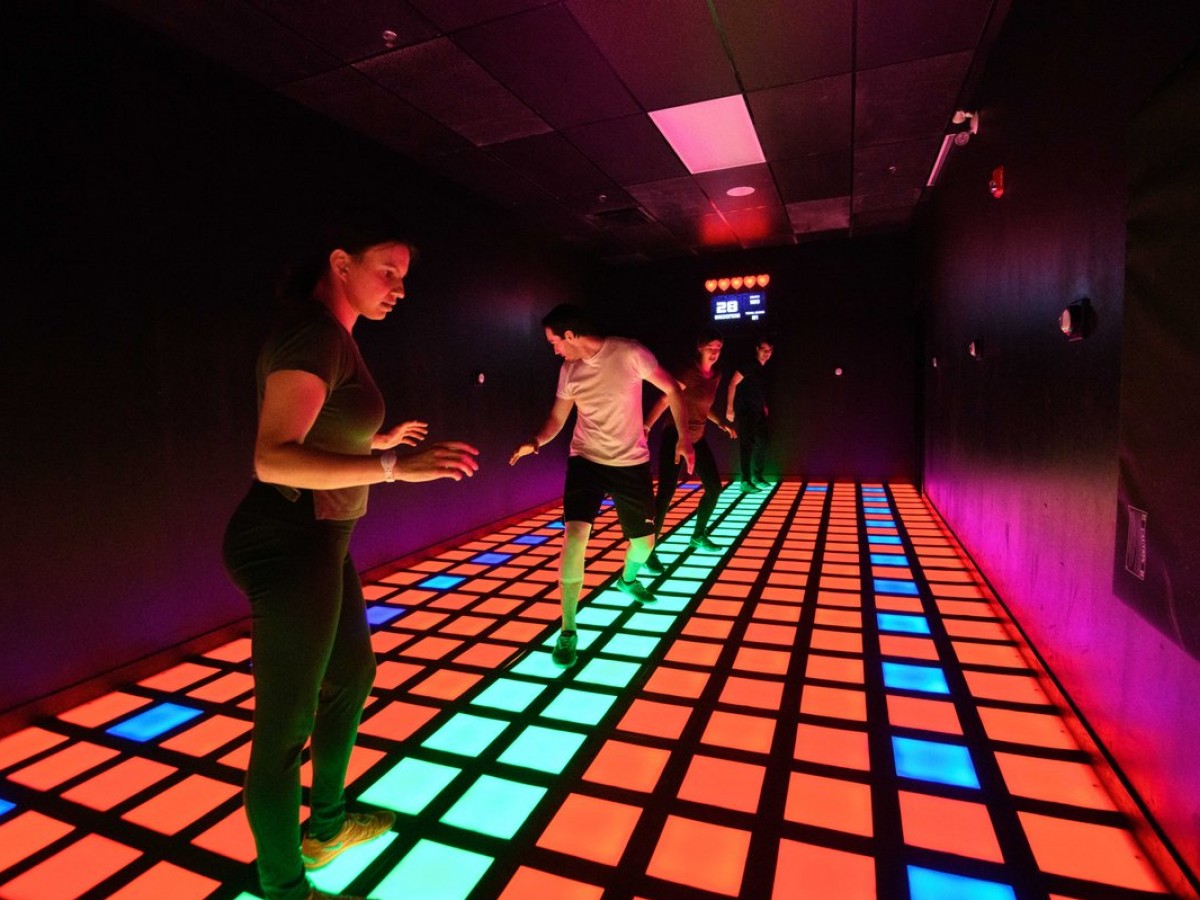 Explaining Activate Games is difficult, but once you play, you won’t want to stop.

“It’s like an 8-bit video game from the 80s where you are physically entering that room and completing it, physically and mentally,” says co-owner, co-founder, and inventor, Adam Schmidt, who created Activate Games with his wife Megan.  “And I would preface with saying it’s not VR,” Adam continues.

To further that, here at Tourism Winnipeg (we’re regulars) we’d say it’s like getting to be the star of the greatest 8-bit game you could imagine.

It’s even better than four-player Super Spike Volleyball on NES (which is saying a lot), while it’s also like entering the world of Reboot (we’re guilty of pretending we are Bob, Dot Matrix and Enzo as soon as we hear those retro arcade-style sounds when entering the facility) or Tron, which is kind of how Schmidt envisioned it to be (although he admits to having never watched the films). The facility has this whole 80s retro vibe that is so on point, from the synthesizer soundtrack that plays, to the game-ending and beginning sounds that seem straight from Atari.

Activate Games will test your hand-eye coordination, your balance, your problem-solving skills, and your agility.

The gist is this: you and your team of three-to-five players have 90 minutes to embark on a quest to beat as many levels and garner as many points as possible in the 11 game rooms. You’ll shoot hoops, duck lasers, throwing balls at targets, climb across a colour-coordinated course, shoot lasers at targets, solving word problems by pushing buttons while avoiding a huge eye, and activate blue floor panels avoiding moving red ones to solve ever elaborate puzzles.

And the best part is, the games keep evolving, while you can continually level up to score more points.

“This is active entertainment,” says Jeremy Darvill, manufacturing operations manager. “We're really trying to make it a gamified experience so when people leave there they actually feel like they accomplished something, because they did! It's really hard to beat some of our levels.”

At just one-year-old today, it’s also been a huge hit. Reservations for any time after 6 p.m. are strongly recommended, while weekend reservations are a must.

Adam and Megan came up with the idea after creating The Real Escape, one of the city’s first escape rooms in November 2014. The Real Escape has also proven wildly popular, so much so that they’ve used the profits from there to open up Activate.

The couple is originally from Kitchener, Ontario. He was a pilot who was stationed here and she was physiotherapist. Now, they are both fully committed to both businesses, with Activate the one that is about to take off on a global scale.

At The Real Escape, they were often putting serious hours into creating new rooms, but the problem was always that a room is a one shot deal for a team. At Activate, you can always level up, while the programmers are always tweaking and evolving the rooms.

“Originally, with the escape room model, we put so much effort into creating those escape rooms and there’s a million escape rooms,” said Adam.

“So we thought while we are doing this let’s create a model that is easily franchisable, or licensed, or corporately owned. Something that we can control that can expand rapidly… so it wasn’t a surprise to us when people started knocking on our doors to franchise this. And that happens now every day.”

Much like you’ll want to assemble a crack team to beat all the games, the Schmidt’s too have brought this entrepreneurial dream to life with a team of experts here in Winnipeg.

They have a whole team of programmers who work on site, while in a separate warehouse they are continually building and testing new games with a their team of specialists, which includes 10 continuously working 3D printers that make all the activation parts.

Adam admits that despite this being a tech-savvy operation, he himself isn’t very technically inclined.

“I draw on a piece of paper what I want a game to do. So it is a template, with red and blue squares,” says Adam. “So, it’s not rocket science, but it becomes like that once someone takes that drawing and makes it a reality.”

Also part of the team is an engineer and patent lawyer who are also working non-stop, as Activate will soon be taking over North America, with one location already open in Kentucky.

In the meantime, everyone visiting Winnipeg should come see what all the hype is about at the OG AG. We tell you the hype is real, so go get Activated to say you were there first before this goes global.

Make waves with your next staycation at these Winnipeg hotel pools